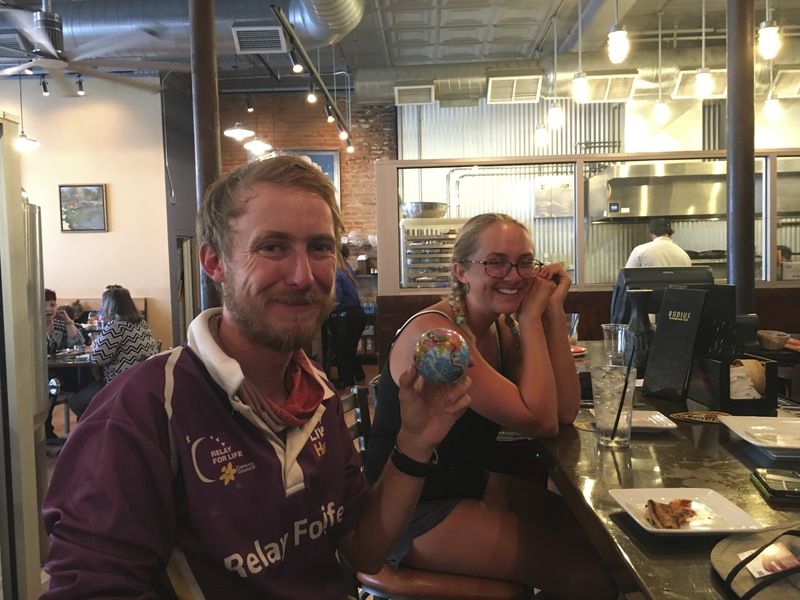 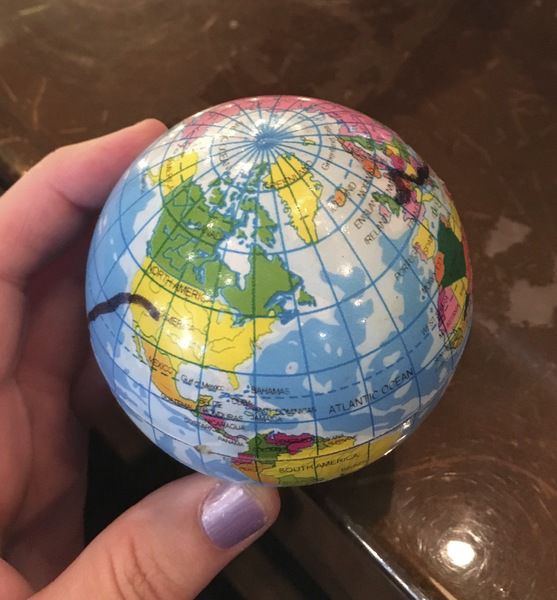 Regina Murphy/GazetteKambskard-Bennett is also tracking his progress on this mini-globe, a stress ball, which might come in handy now and again. 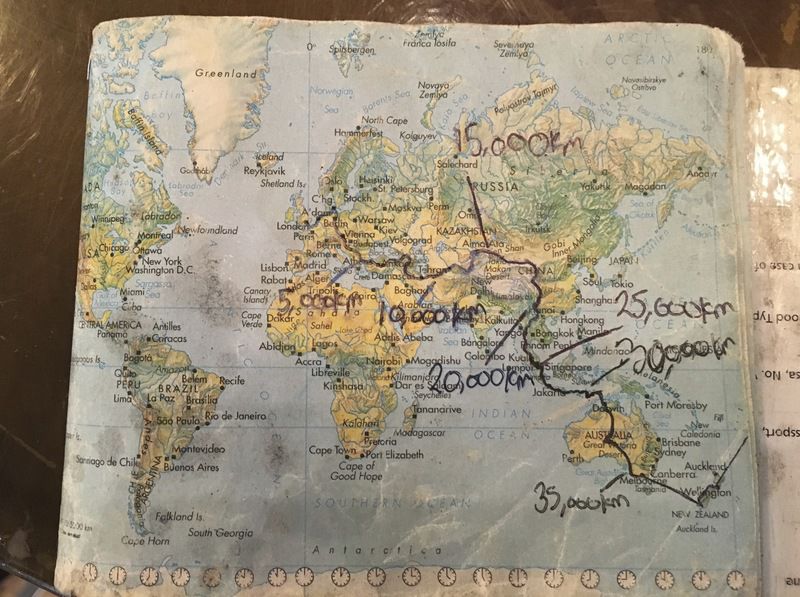 Regina Murphy/GazetteKambskard-Bennett is also tracking his progress on this mini-globe, a stress ball, which might come in handy now and again.

An adventurer came through Emporia Wednesday and Thursday.

Jonathan Kambskard-Bennett is cycling around the world, and he stopped here.

Kambskard-Bennett was having some pizza at Radius around noon Thursday, and Gus Bays introduced us.

According to his blog, JKB, his nickname, had no prior experience of cycle touring.

“Like, literally nothing,” he wrote. “I’d never pedaled further than about 10km before leaving home. The first day of this tour was the first time I’d ever tried to ride my bike with all the bags on.

“I still know nothing about bicycles or camping and I’m pretty useless at reading maps.

“But that’s what makes it fun! Everyday is a learning curve, and here I share some thoughts as I discover both the world and a new lifestyle ‘in the saddle.’”

There were two saddles in town, as JKB’s sister Lea has joined him for a leg of the journey.

How is this even financially possible?

“I have a couple of sponsors for my gear,” he said. “There’s Paradise, and, oh yeah, L.L. Bean.” He pointed to the logo on his shorts. “They’re an American Company,” he said, a twinkle in his eye.

JKB started with a pool of funds saved up, then he started working on the road.

“I worked in Australia at the beginning of this year, for three months,” he said. “In three months I saved up about four-fifths of the money I spent in the two years previous, plus it’s a quite cheap way to travel. We just sleep in a tent and cook our own food.”

In fact, Wednesday night, the pair was able to sleep indoors, on real beds thanks to Gus and Sarah Bays. Gus Bays was treating the couple to lunch before they hit the road for five hours, heading for Missouri.

“Kansas has been amazing because we’ve been able to camp in public parks,” JKB said. “You don’t find that in many countries, where you can just camp in certain places. I guess it’s because of that long-distance cycling group that comes through here, so people are quite chilled about it.”

Kambskard-Bennett started in January 2015, and he plans to be back in London by Christmas. When it comes to oceans, he takes boats where he can, however, the Pacific required a plane from East Timor to New Zealand, and then from there to San Francisco. He’ll do one more flight to regain the British Isles.

His sister flew to the states to enjoy this leg with him.

“I flew out to Denver, then I road a bus to Junction, met him there,” Lea Kambskard-Bennett said. “Almost three weeks, I think.”

The pair are pointed toward St. Louis, where they’ll take a break and fly to the northeast for celebrations with a relative. Lea Kambskard-Bennett will go home from there, and JKB will fly back to St. Louis to continue his journey.

With an entire continent to choose from, what brought Kambskard-Bennett to Emporia?

There’s a long distance cycle route in the U.S., called the Trans-Am,” he said, which goes through Kansas, a bit further south of here. So we were following it as far as Newton, and then we want to get to Clinton, in Missouri, because that’s where the Katy Trail starts, which goes to St. Louis, so it’s like, oy, Emporia one-stop, then another couple of days to Clinton … So we just found the right sort of route, and we had a place to stay.”

Emporia just can’t help it. It is officially a destination. Good luck to the Kambskard-Bennetts. Follow the adventure at jkbsbikeride.com.