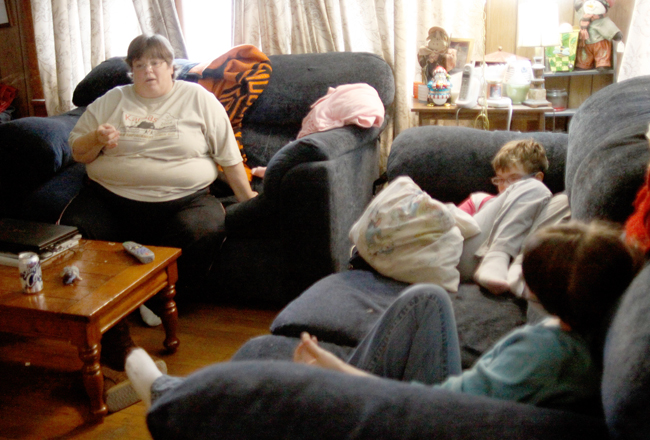 Val Baker, left, with her children, Halie, 11, and Morgan, 9, talks about the challenges of raising children with special needs. 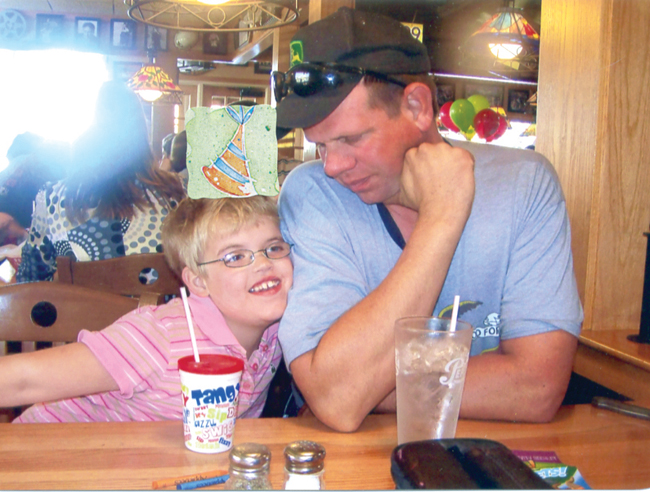 Courtesy photo - Halie Baker, 11, moves in for a hug from her father, Tony Baker, during a birthday party. Halie was diagnosed with autism and her mother is actively raising awareness for issues that surround families raising children with special needs. 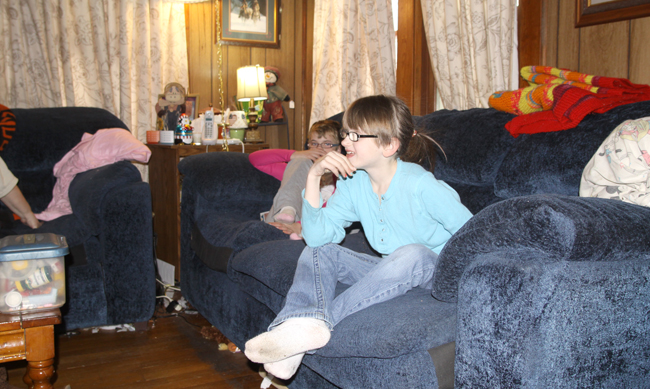 Morgan Baker, 9, relaxes on the couch at her home. Morgan is one of two children with special needs in the Baker home.

Val Baker, left, with her children, Halie, 11, and Morgan, 9, talks about the challenges of raising children with special needs.

Courtesy photo - Halie Baker, 11, moves in for a hug from her father, Tony Baker, during a birthday party. Halie was diagnosed with autism and her mother is actively raising awareness for issues that surround families raising children with special needs.

Morgan Baker, 9, relaxes on the couch at her home. Morgan is one of two children with special needs in the Baker home.

Parenting is a challenging job, but with children with special needs it becomes even more challenging.

Emporians Val and Tony Baker have two children with special needs: Halie, 11, and Morgan, 9. Halie, who is in the fifth grade, was diagnosed with autism. She has seizures, acid reflux, attention deficit hyperactivity disorder, asthma, a blood disorder, mild retardation and a cyst on the left side of her brain that causes the seizures. The type of seizures Halie has are called absent seizures where Halie stares off.

“If you unplug a lamp and plug it back in, it’s like that,” Val Baker said.

Morgan, who is in the fourth grade, has ADHD and mild retardation. Both are classified as disabled by the State of Kansas, Baker said. Together the girls take eight to nine medications.

The most challenges the family faces are with Halie, who started exhibiting problems since birth. It was tough getting a diagnosis for Halie and she did not receive the diagnosis until she was 3.

“Halie had a failure to thrive diagnosis,” Val Baker said. “Because she was only 20 pounds and she was 3 years old.”

For the first three months of Halie’s life she was in and out of the hospital. As she got older, her delayed development became evident. She was 2 and couldn’t walk on her own. She was not feeding herself. She didn’t talk and was taught sign language.

“She does sign language when she is frustrated or scared,” Baker said, adding that Halie still needs help getting dressed.

It took three doctors to achieve the diagnosis of autism, Baker said. She finally was diagnosed by a Topeka doctor.

“It’s very hard to get a diagnosis,” she said. “There are a lot of kids diagnosed with autism who actually are bi-polar. Getting a diagnosis is hard.”

Once a diagnosis is reached, it’s still not an easy road and won’t be in the near future.

“Halie will probably always be with us,” Baker said. “Unless she goes into a group home, which she likely will not.”

Finding the right services have been a challenge for the Baker family, Val Baker said. Halie was first sent to a mental health professional. Later she got a caseworker from Hetlinger Developmental Services. Today Halie has 10 specialists that care for her different needs, Baker said.

“I wish they had tests for infants,” Baker said. “The earlier the intervention the better. Early intervention is everything.”

Adjusting at school is a challenge as well, Baker said. While she likes the teacher Halie is with now, it has not always been an easy journey. With the closure of the Lowther schools, she’s not sure what’s going to happen.

“You fight with the school every year,” Baker said, adding that more autism awareness in schools is needed.

Baker added that when the school Halie was attending at the time decided to cut para professionals, she had to fight that, too.

Trying to get medical staff to listen is tough too, Baker said.

Baker said there are people out there who work with children that have special needs, but those people aren’t widely known.

Cuts to the mental health and the special needs system are hurtful as well.

“They don’t know at the drop of a hat that we may have to go to the hospital (with special needs children) for a couple of days,” Baker said.

Programs such as Medicaid are critical. Halie has one medication that costs $300 alone. Both girls are on Medicaid.

Public awareness in general is lacking as well, Baker said.

“Halie is 11 years old and still sits in the (shopping cart),” she said. “People look at me like I’m crazy. But she’s in that cart because she wants to be. That’s where she feels safe.”

Children with special needs can have meltdowns as well. When they happen in a public place, Baker said she often gets judgment from others.

“People think I can’t control my child,” she said.

A strong network is needed, Baker said. There was a support group in the area for parents of children with autism but it disbanded, she said.

“Kids with disabilities need a network,” she said. “We need to get a network in Emporia saying where people can go and what people can do.”

How Trump's words have been used against him in court

Val Baker’s husband recently returned seven months ago from a tour of duty in Egypt. He was gone a year. It was during that time that she had to start facing issues as a single parent. She started having less time to herself. When her company she worked for went under, she didn’t have any money for herself — it was all funneled into the girls.

The Baker family is rarely home in the evenings. The kids are in Special Olympics in Emporia with the Emporia Express headed by Nancy Rumold.

“The kids love Special Olympics,” Baker said. “That’s one thing they can do with sports. Morgan is on a basketball team this year.”

They also are involved in dance and go to Ginny’s Dance Studio.

“The only dance studio that was able to handle Halie was Ginny’s,” Baker said.

The girls also are involved in Girl Scouts. Morgan’s goal is to sell 1,000 boxes of cookies so she can get an iPod.

Tuesdays are a busy night for the family with behavioral therapy, dance, and basketball practice packed into one night.

“I have to somehow in between feed them,” Baker said.

Advice for other families

Baker gave some advice for other families who have children with special needs.

Documentation is critical too.

“The more documentation with everything the better,” Baker said. “That way nobody can come back and say, ‘When did this happen?’ or ‘When did that happen?’”

A good support system is imperative as well.

“My friends are good with my girls,” Baker said. “My whole family is protective of Halie.”

Hi there! Has there been any progress on starting a parent support group in Emporia? I think there is a need (and this was written 5 years ago....so I'm hoping....)