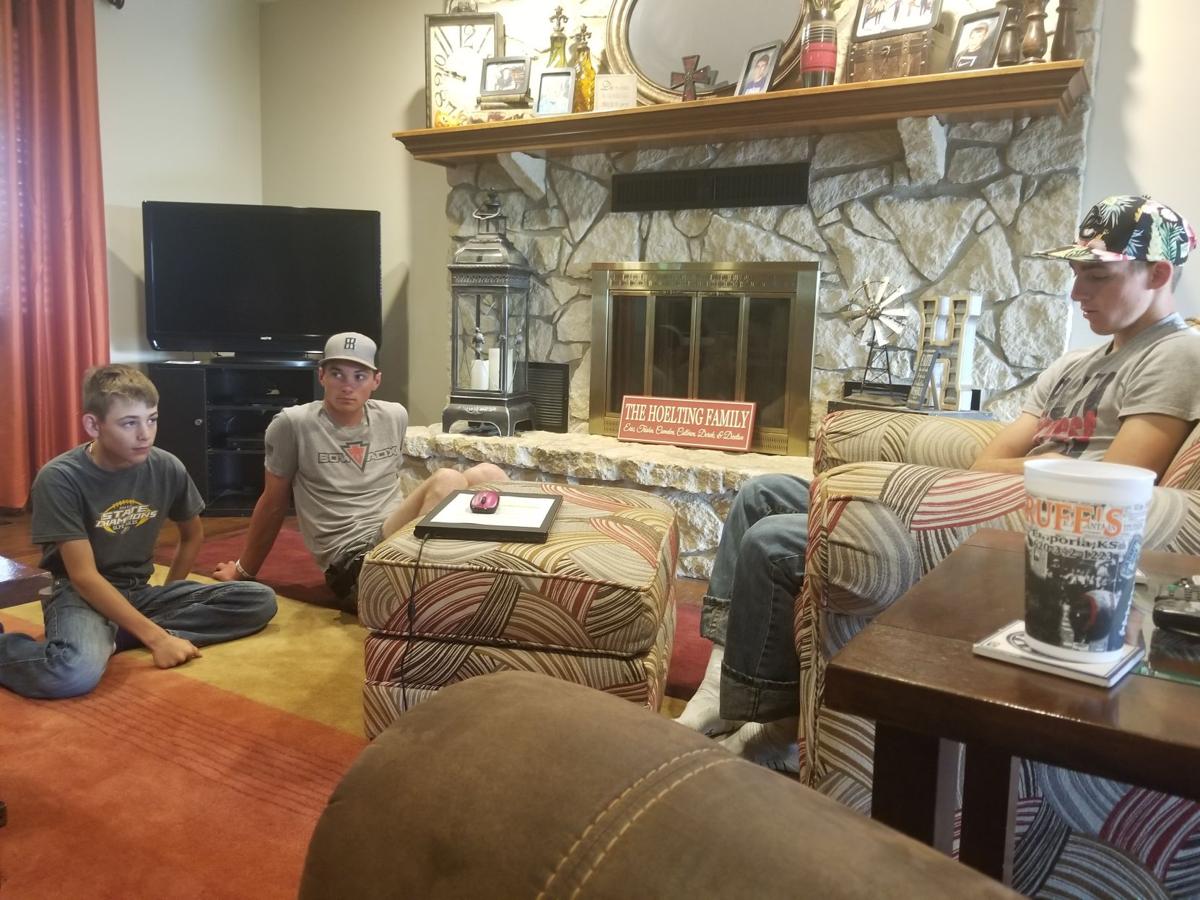 From left to right, Dexton Hoelting, Trey Adams, and Camden Hoelting sit in the Hoelting’s living room in their home outside of Olpe.

From left to right, Dexton Hoelting, Trey Adams, and Camden Hoelting sit in the Hoelting’s living room in their home outside of Olpe.

Dexton Hoelting, who will be in seventh grade next year, and Camden Hoelting, a high school senior, have been involved in team roping most of their lives. This summer, they will compete at the National Junior High Rodeo Finals and National High School Rodeo Finals, respectively. It will be Camden Hoelting’s last time competing as a high school student. He has done it twice before.

For Dexton Hoelting, it will be his first time to take part in the national finals.

He still recalls the state contest, where he and his team roping partner, Jhett VanderHamm, took third place. It was a close contest the entire time.

“We went out there and just did what we could do, I guess,” Dexton Hoelting said.

His team was trailing until a member of one of the leading teams made a costly mistake.

The header — the member of a team who ropes the horns of the steer in team roping — missed roping his animal twice. This bumped the team from being tied for first into fourth place, pushing Dexton Hoelting’s team up in the rankings.

“The header for the top team was pretty dang good,” Dexton Hoelting said. “Guess it just wasn’t his time.”

He has an idea what to expect at nationals, because he has watched his brother compete on the high school level.

About 200 teams — the top four from every state — will be there. There will also be teams from Canada, Mexico and other countries.

“I like to have something in my hands,” he said.

Most other sports, he said, don’t give him this feeling.

The boys’ mom, Trisha Hoelting, said it was a pleasant shock to see her young son and his partner make it to the national contest.

“They’re both sixth-graders and this is their first year competing,” she said of Dexton Hoelting and his teammate.

The two had a rough autumn, she said, but in the spring they came alive and began providing a serious challenge to their competition.

For Dexton Hoelting, facing a fear of failure is something he’ll have to overcome.

“To mess up or not do my job,” he said, is a daunting thought.

This will be Camden Hoelting’s third and last year at nationals. He and his partner, Trey Adams of Junction City, haven’t won the national contest yet, but they intend to this year.

Adams, who spent the week after the state contest with the Hoeltings, said he was looking forward to taking the title.

Camden Hoelting thinks they have a chance.

According to Camden Hoelting, teams from drier climates have an advantage over his team, because they can practice almost daily. Mud and rain keeps them out of the arena, unless they can find someplace dry to practice or just practice roping a dummy.

According to Camden Hoelting, they’ve practiced in a barn lately.

They’ll have plenty of time to work on their technique before nationals July 14 - 20. They’ll attend several rodeos and compete before that time. They won’t be able to watch Dexton Hoelting compete in the junior high national contest, because they’ll be at a rodeo, keeping their skills sharp.

This can be good or bad; steers aren’t known for behaving logically, and they aren’t necessarily consistent.

Camden Hoelting got his start in roping despite a rough incident in the arena when he was about 5 years old. He lost the thumb on his right hand.

He had trailed his grandpa and his dad, Eric Hoelting, into the practice arena his father had built on their property outside of Olpe in 2003. Camden was little, but according to the family, his dad knew his son would use it one day as well.

Camden Hoelting, at the age of about 2 or 3, had already taken to swinging a rope and trying to lasso things.

Shirking a nap, he pestered his dad to let him try swinging the rope.

Camden Hoelting threw the rope, striking the steer’s back legs and startling it. The animal took off, the rope catching its feet as it ran. The rope caught Camden Hoelting’s thumb.

According to Camden Hoelting, the missing thumb has never bothered or impeded him. He learned to rope after losing it, he said, so it has never prevented him from doing well in the arena. He’s thankful it happened when it did and not when he was older.

The biggest challenge for him comes not from holding the rope but from trying to stay consistent during a contest and getting his horse to mind.

There’s not much pressure, he said, to perform well just because it’s his last year roping as a high schooler.

“I want to go out with a bang, so there’s a little more pressure there because it is my last time I’ll get to go to nationals,” Camden Hoelting said. “But then again, I’ve been there twice. It’s just another rodeo, just got to go compete. Granted, it’s more fun; it’s bigger.”

The audience is bigger, too, but that isn’t a major concern.

“Just go out there and do your job, and you’ll be fine,” Camden Hoelting said.

A sense of competitiveness is part of what has driven Camden Hoelting as far as he has gone. He has also had support from family — not just a cheering section, either. Camden Hoelting recalls his grandmother letting him rope her foot when he was small.

It has led to good things.

Not only will he compete at nationals this year, he has also received a rodeo scholarship to attend Northwestern Oklahoma State University, where he will continue to team rope competitively and study agriculture with a minor in animal science.

The boys also take part in other rodeo events.

They get it from their father.

Eric Hoelting has been successful on the professional scene. He once won a pickup truck in a contest and he’s won saddles — something Camden Hoelting has done and Dexton Hoelting hopes to do one day as well.

If the success of his father and brother is any indication, it’s only a matter of time.

"Don’t let one miss at the rodeo or one failure set you back. Just keep going forward — that stuff happens.”