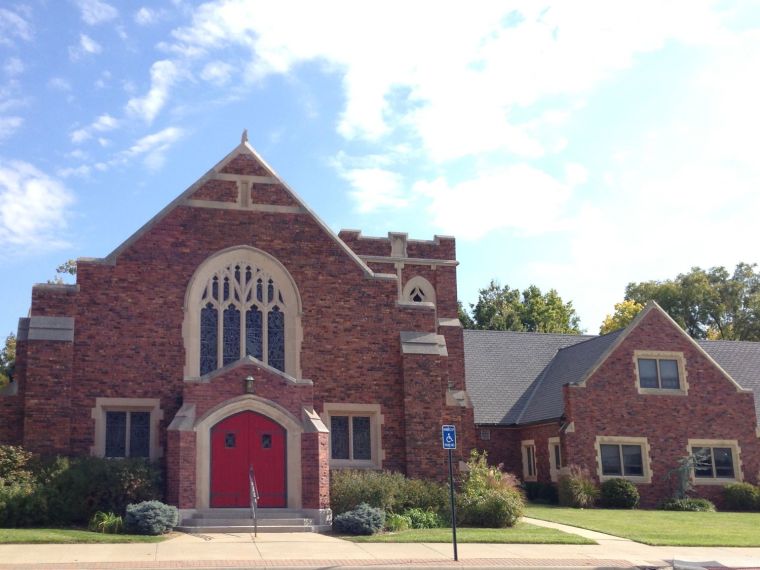 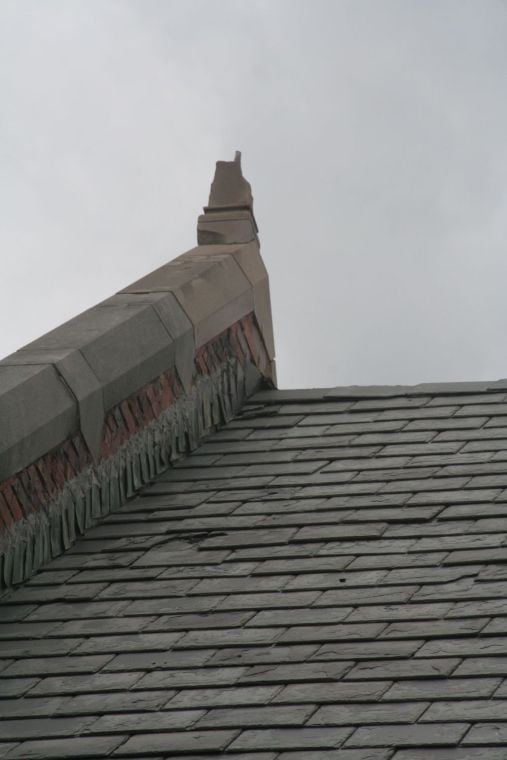 The roof at St. Andrew's Episcopal Church is missing its cross. Several slates were also damaged in the strike, as well as windows and the church's electric organ.

The roof at St. Andrew's Episcopal Church is missing its cross. Several slates were also damaged in the strike, as well as windows and the church's electric organ.

Within the past year, two large Episcopal churches in  east-central Kansas have been struck by lightning. Each was struck previously, as well.

“The cross above the narthex was struck by lightning again on the night of July 26,” writes Patrick Kelley, Chief Warden of the church. “The cross was shattered, the roof received minor damage, two small panes in the big Te Deum window were damaged by shards, our wonderful electronic organ was damaged and the amplifier for the public address system is only half the gadget it used to be.”

All the damage is covered by insurance and a $1,000 check from a non-member of the parish, in memory of Fr. Larry Valentine, will cover the deductible.

“I’d been at St. Andrew’s for less than a month when the lightning struck,” says Rev. Christopher J. Arnold. “The last time this happened was shortly after our last priest started. People have suggested it is either God’s judgement or the Adversary’s attack. The important thing, though, is the building still stands, the community still gathers, and the worship of the Trinity continues.”

“The cross was struck seven years ago and, before that, 25 or 30 years ago. Is God trying to tell us something — perhaps that the cross, with its steel supporting bar inside, is a lightning magnet?” Kelley wrote in his newsletter.

It has been suggested that it might be a good idea to not replace the cross, but remove the bar and finish the roof peak with pointed stone, like the other gables on the church.

The congregation is considering it’s options.

“If we’re going to put a pointy cross on top of a building in Kansas, we have to expect that it’ll be hit by lightning once in a while,” Arnold said.

“We pray for God’s protection, but we also have insurance.”

And for that which insurance does not cover, checks can be made out to St. Andrew’s and mailed to 828 Commercial St. or dropped off at the office.

As far as smitings by lightning go, Trinity Episcopal Church in Lawrence has seen worse than the one that occurred last year.

In 1955 lightning struck the church’s bell tower and set the church on fire, burning it down.

When lightning hit the bell tower again in May of 2012, it left the church intact. It did, however, blast a hole in the wall of the tower and enter the church’s electrical system, frying the wire innards of the fire alarm, phone and elevator systems, as well as the church’s organ console.

When lightning hits twice, even a church loses faith in Providence to protect it from the elements. That’s what insurance is for, and fortunately insurance covered the church’s electrical systems and the organ console, which, at $160,000 is no small expense, the Lawrence Journal-World reports.

As church rector Robert Baldwin said, “There’s no point in taking a top-of-the-line new console and hooking it up to an organ that’s 15 years past due” for renovation. So the church is trying to raise $250,000 to replace and repair the 60-year-old pipe organ’s many parts, and to also purchase a much-needed lightning protection system.

To help with fundraising, Trinity will let donors purchase pipes that correspond with specific musical notes. That way, for example, a music-minded parishioner with a deep affection for, say, C minor or someone who played a particular note in a bell choir can purchase the notes they want, Baldwin said.

“Hopefully there won’t be too much competition among the popular notes,” Baldwin said, chuckling.

Donors’ names will be associated with their chosen pipes somehow, either by a marking on the pipes themselves or through a church record. For Baldwin and the church, “all notes are equal.” Any pipe is available for $100, regardless of the size. (Although when it comes to paying the bill for the organ, larger pipes often cost more money.)

Lawrence-based Reuter Organ Co. is doing the work on the Trinity organ. Using a local company saves costs on shipping parts. It also makes talking with repairmen and checking up on the organ’s progress a lot easier.

The restored organ will contain about 2,000 pipes, an upgrade for the church that Baldwin said prides itself on its musical tradition. When it’s all done, the refurbished organ should have a richer, more expressive sound. The parish expects repairs to be finished early next year, with parts of it hopefully coming online in time for the Christmas season.

In some sense, the strike was a blessing. The church was spared and got an expensive and needed organ console out of the event. From that perspective, it was “the luckiest lightning strike ever,” Baldwin said.

All the same, he and the parish aren’t counting on luck for next time, given that the bell tower is still and likely always will be one of the tallest structures in the vicinity — not to mention made of metal. That is why they’re also raising money for a stronger lightning protection system.

“It’s not worth it to put our brand new organ in and then have it get hit by lightning again,” Baldwin said.