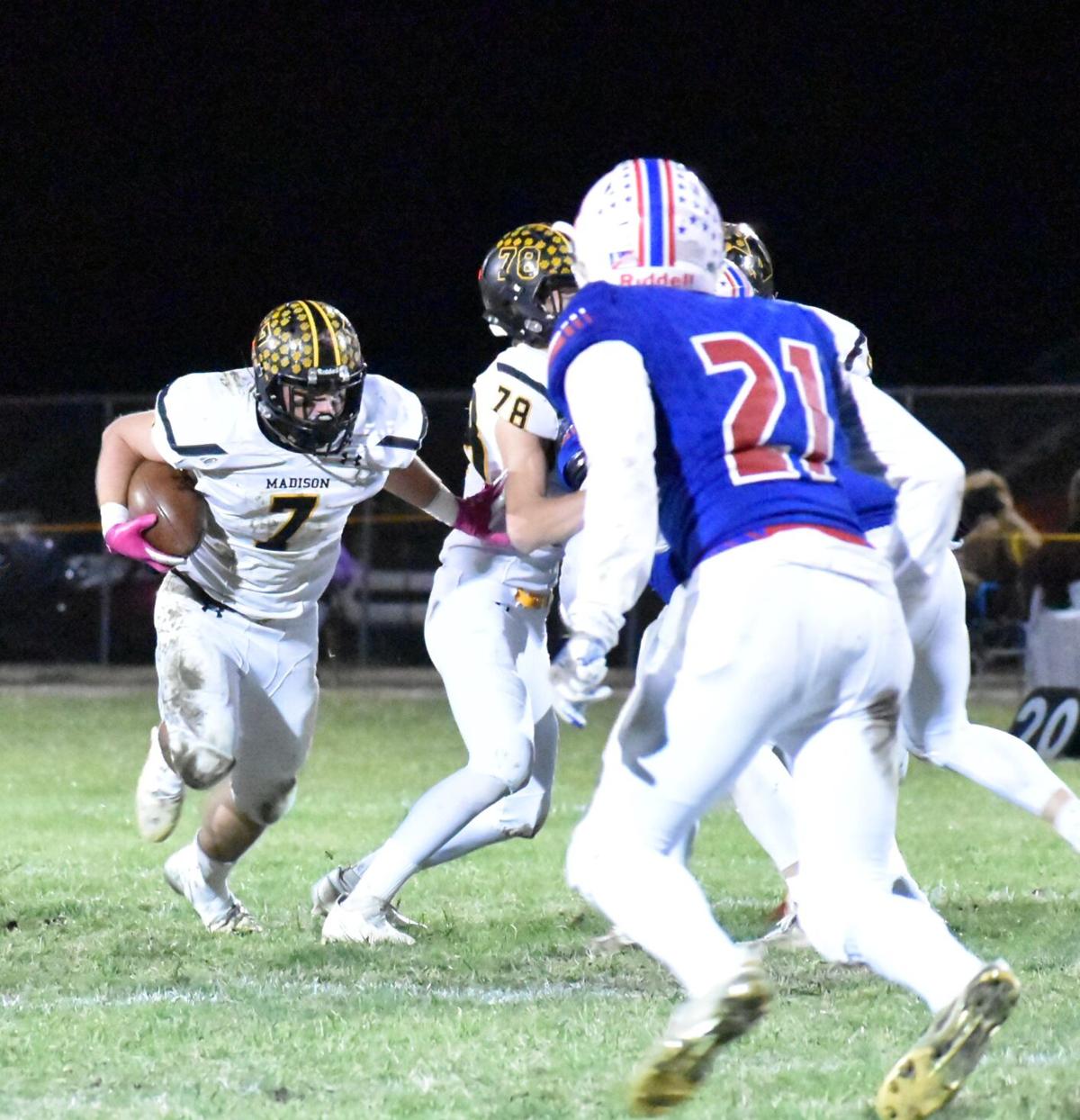 The Madison Bulldogs are ready to take on Little River at home tonight after defeating the defending state champions Canton-Galva last week.

Olpe competes against Lyndon on Sept. 18, 2020 at Olpe High School. The Eagles take on Lyndon this evening.

The Madison Bulldogs are ready to take on Little River at home tonight after defeating the defending state champions Canton-Galva last week.

Olpe competes against Lyndon on Sept. 18, 2020 at Olpe High School. The Eagles take on Lyndon this evening.

Entering Week 12 of the 2020 high school football season, two area programs remain standing Friday night as Olpe and Madison prepare to host respective sub-state matchups with trips to state championship games on the line. The Eagles, 10-0 on the year, welcome Lyndon (9-2) on Friday; Madison, 11-0, meanwhile play host to Little River (9-2), which ousted Chase County 70-26 in the sectional round.

Both programs will enter their respective semifinal games within reach of a state title game in the closing weeks of a season that has survived in spite of COVID-19. Here’s how two of the state’s top teams got here:

The Eagles faced a familiar foe in Lyndon Friday night. Olpe topped the Tigers 13-7 when the teams met earlier this season on Sept. 18. It was the closest game the Eagles have played all season, and far and away the toughest opponent Olpe has faced in 2020.

For a team that won a number of games by 60+ points this fall, the Week 3 slugfest looked a lot different than most of Olpe’s contests.

After a pair of early interceptions by Eagles quarterback Damon Redeker, Lyndon jumped out to a 7-0 lead, opening a rare Olpe deficit. Redeker and the Eagles helped erase those early struggles, pulling ahead for the six-point win. In the weeks that followed, Olpe stormed through the remainder of the regular season, and arrived to the 1A state semifinal Friday following a 53-0 victory over Jackson Heights and a forfeit by Uniontown, with the only thing standing between the Eagles and a trip to the state championship being those same Lyndon Tigers who played Chris Schmidt’s Olpe squad so tough two months ago.

Redeker, a junior, recovered from his early mistakes against Lyndon on Sept. 18 by scoring both of the Eagles’ touchdowns — one on offense, one of defense — and resumed his impressive season under center the rest of the way. Olpe’s first-year quarterback entered Friday night with 895 passing yards on the season to go with 21 touchdowns through the air. The junior has also gotten it done on the ground, amassing 544 rushing yards and nine touchdowns with his feet as the Eagles’ second-leading rusher.

Elsewhere in the rushing game, Olpe has relied on the trio of Kynden Robert, Chris Olsson and Derek Hoelting, who have combined for 1,198 yards and 24 touchdowns to help fuel the Eagles’ offense. In the passing game, Redeker has looked often to Jordan Barnard, who hauled in a shade under 300 yards and nine receiving touchdowns prior to Friday night. Gabe Castillo, who also serves as the team’s kicker, has proven reliable in the passing game, as well, catching five passes for 108 yards and four touchdowns so far this fall.

And while the Olpe offense has blown opponents away, the Eagles have also proven themselves elite on the defensive side of the ball, tossing six shutouts on the season heading into Friday night. Leading the Olpe defense is Ted Skalsky, who has racked up 36 tackles on the season. In the secondary, Redeker and Barnard have been stingy in the turnover game, combining for five interceptions and three fumble recoveries on a defense that has fed off of turnovers.

It’s no secret why Schmidt’s Eagles entered Friday night one win away from returning to the state championship game. In 2020, Olpe has emerged as one of the most complete team’s in the state and have so far lived up to the hype in the 1A state playoffs.

Back in August, head coach Alex McMillian was clear about where he wanted his program to be come mid-November.

“As a program, we plan on winning our league, our district and then going on to compete for a state championship,” told the Gazette prior to the season. “Those are our stated goals.”

On Friday night, with Little River (9-2) visiting, McMillian’s Bulldogs were one step closer to achieving those aspirations. After completing an unblemished regular season, Madison cruised early round postseason wins of Howard-West Elk and Oswego before burying defending state champions Canton-Galva 34-24 to reach the state semifinal. A year after falling in the sub-state round, the Bulldogs were right back where they left off in 2019 with a chance to go even further on their home turf.

Similar to Olpe, Madison has gotten it done on both sides of the ball this fall. Quarterback Casey Helm has stewarded the Bulldogs’ offense masterfully, completing 72% of his passes for 1145 yards and 21 passing scores entering Friday night. On the ground, Madison has boasted one of the deepest running back stables in the state. Hunter Engle has led the rushing charge with 626 yards and a whopping 21 touchdowns. Behind him, Ryan Wolgram has contributed 369 yards and touchdowns while Brome Rayburn has posted 361 yards and six scores. Bryson Turner (218 yards, five TDs), Tristan Smith (268 yards, five TDs) and Braden Rayburn (111 yards, three TDs) round out one of the most talented rushing attacks in the state of Kansas.

On defense, Brome Rayburn has been a menace for Madison, tallying 89 tackles on the season with Drew Stutesman not far behind with 77 tackles of his own. Rayburn’s six interceptions have led the Bulldogs, as well, with Wolgram and fellow defensive back Trace Dannels having each picked off four passes to add to Madison’s interception count of 20 on the season. The turnover-hungry defense paired with the crushing rushing attack of the Bulldogs has made Madison a brutal test for opponents all fall.

After succumbing to Canton-Galva at sub-state in 2019, Madison found itself back on the doorstep of reaching a state title game Friday night with a chance to fulfill the ultimate goal McMillian set at the start of the season.

Results from Friday’s games were not available at press time but check www.emporiagazette.com for the latest coverage.