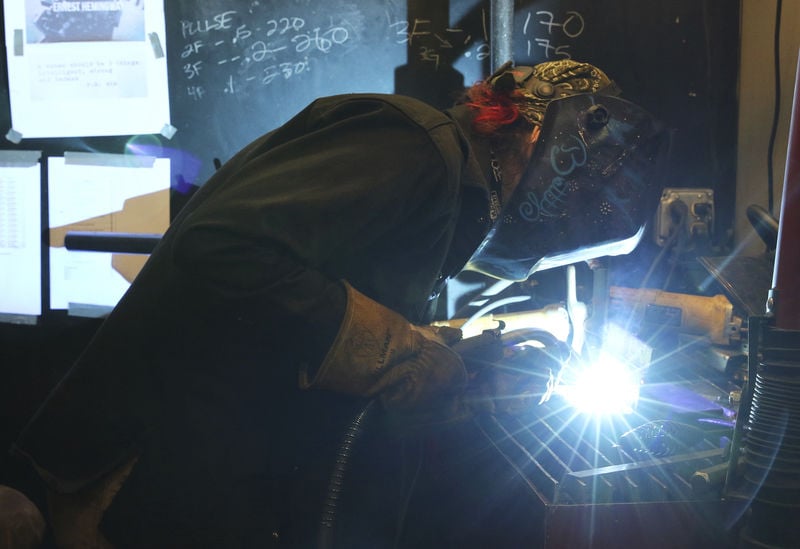 Courtesy photoAlain Jones practices her welding skills recently during a class at Flint Hills Technical College. Jones will graduate with an Associate of Applied Science Degree in May 2018 and was recruited for employment at DPP Manufacturing, where she currently works. 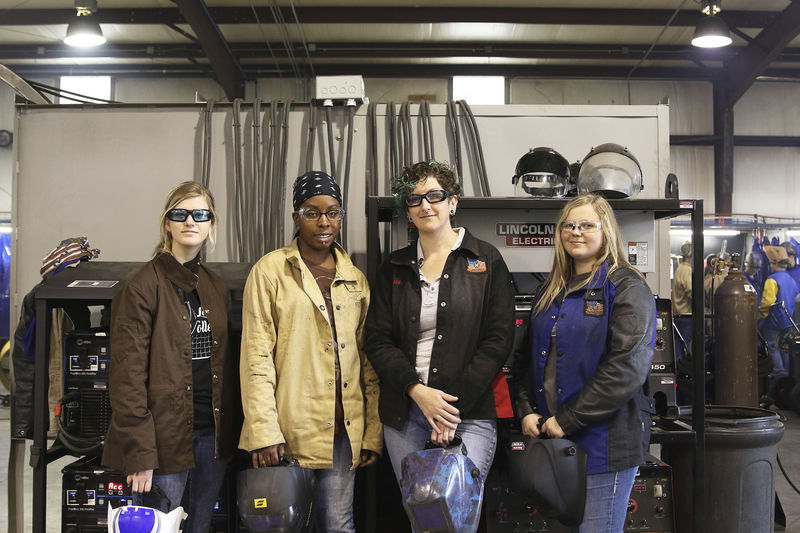 Courtesy photoAlain Jones practices her welding skills recently during a class at Flint Hills Technical College. Jones will graduate with an Associate of Applied Science Degree in May 2018 and was recruited for employment at DPP Manufacturing, where she currently works.

Alain Jones started the program last year, and now three other women have joined and hope to be a part of the welding profession after finishing school.

“It’s so exciting to have four women in our welding program,” said Michele Boyce, executive assistant/KanTRAIN in the Welding Technology Program. “Last year we only had one, Alain Jones, who was the token female. She has been amazing for recruiting for us. I haven’t even been with Flint Hills Tech a year yet, as I came in last February. Alain was already here and was blazing a trail, literally, through this program.”

Jones said she entered the world of welding because working in retail left her feeling burned out.

“I was 33 years old when I started the program,” Jones said. “I wanted to do something better with my life where I would continue to grow and develop my skills — and also, at the same time — contribute to the world. I’ve always been handy and hands-on. I like creating things and working with my hands and my mind.

“I do stained glass for fun and my roommate said, ‘You can solder, so you can probably weld.’ They are completely different things, but I thought it would be fun to learn. I chewed on the decision for a week and thought, ‘Hell yeah, I’ll do it,’ and here I am.”

Boyce said a grant from KanTRAIN helped rebuild the welding program four years ago. It was housed then in Sauder Manufacturing, but moved four years ago to 3701 W. Sixth Ave.

Jones said entering the field was challenging for her at first.

“I didn’t really enjoy it at first,” she said. “For half of the first semester it was like I was on a new planet, learning a new language. I didn’t know what was going on and was frustrated. I then had this like, ‘ah ha’ moment, and everything just started clicking. I thought, ‘Man, this is my jam!’ I really enjoy it a lot now and it’s really fun.

In addition to finishing her classes at FHTC, Jones is already working in the field for DPP Manufacturing in Emporia.

“It’s hard work but I enjoy it,” she said. “We are doing some jobs now at Tyson and we have to wear hard hats and safety harnesses and, half the time, we’re 35 feet up in the air. It is dangerous. One small mishap could be pretty terrible, but half the fun of it is the thrill of it.”

As Jones was learning the trade, Shauntae Stewart was busy, working as a cosmetologist.

“I was having a quarter-life crisis,” Stewart said. “I wasn’t interested in anything that I was interested in before. I was really great with music and art, but I just didn’t know what I loved to do anymore. I was burned out on doing hair a couple years after I graduated. I started thinking about all of the things I used to do.

“At Emporia High and Emporia State, I took jewelry and metals for a couple years and thought that was cool. A couple years ago I really starting thinking about welding and decided to pursue it. I really love it.”

Stewart said she is currently researching her options for employment when she finishes at FHTC.

“I’m just kind of winging it, but I’m still researching the possibilities,” she said. “I’ve been thinking about checking out the union, doing custom motorcycle work and an entrepreneurship in this particular field. I’m not so much looking for the art aspect as I am for the ‘get your hands dirty and create’ aspect.”

Kelsey Bosch said she was helping her grandfather work on his swather one day, when something clicked.

“I thought how I could be more useful than just standing there, holding something for him,” Bosch said. “There were people who argued with me and told me I couldn’t be a welder because I’m too girly-girl. I would get that from people who don’t actually know me and it was frustrating. This is my first year in the program.

“I like to know that we are all doing something that people say, ‘Oh, you’re a woman;you shouldn’t be doing that.’ I like that we can all prove those people wrong. The sky’s the limit for me pretty much. I was hoping to get on the pipeline and travel after school since I like to travel.”

Kelly Muoio said she started welding during her freshman and part of her sophomore year at Northern Heights High School.

“I went to Chase County the rest of my sophomore year and both of my teachers said I was a natural at welding,” Muoio said. “It just came natural to me, and my teachers suggested getting into the field. When I came to Emporia this year, I told my counselor I wanted to be a welder, and he said he could get me enrolled.

“This was on a Friday and I started on Monday, so I only had a few days to get ready for it. I was so excited during those two days. I absolutely love it. My plans are to travel and work on the pipeline or work in a factory, welding things together. I love welding and plan to get my associate’s degree.”

Boyce said there were amazing opportunities for welders, regardless of gender or age.

“We had a career fair last year with about 13 different businesses here and hope to grow that this next year,” she said. “It gives our students a chance to meet actual employers and discuss what fields are out there and what they will be actually doing. I think that’s a nice, home turf advantage to be able to feel it out and see if there is a direction one would want to go. Some employers are ready to hire welders immediately. We will have our next career fair event in April 2018.”

Boyce said with the help of the KanTRAIN grant, FHTC’s welding program has continued to grow.

“The KanTRAIN grant has really helped our welding program, which was struggling 10 - 15 years ago,” she said. “It’s something now that really holds its own and really shines in the industry. Potential students are hearing about the successes here. We have a lot of students who have gone on to great jobs. We have two great instructors who have years of experience between them.”

As the welding program has grown, so has the interest from female students for the programs at FHTC.

“Last spring’s Intro to Welding class was majority retired females,” Boyce said. “Having these four ladies in our program now is very exciting. They have the attitude, ‘Don’t you dare tell me what I can’t do because I will do it twice.’ Kelsey and Kelly, our two younger students — don’t you dare underestimate them. In a couple of years, no one will be able to stop them. I can also relate to Shauntae and Alain changing career paths.”

For more information on FHTC’s welding programs, contact Boyce at 343-4744 or visit www.fhtc.edu.

Boyce said she wanted women to know that, regardless of age or gender, the field of welding could offer great career opportunities.

“The attention to detail that females have for any kind of creating, making, building, doing — it’ll surpass, in my opinion — a man’s,” Boyce said. “The mentality is different. To watch young girls come in and see — ‘I don’t have to be what you think I should be. I’m going to do what I want, do it my way.’ Maybe they’ll love it and continue on, but maybe they won’t. They will have this trade in their back pocket if they ever want it.”