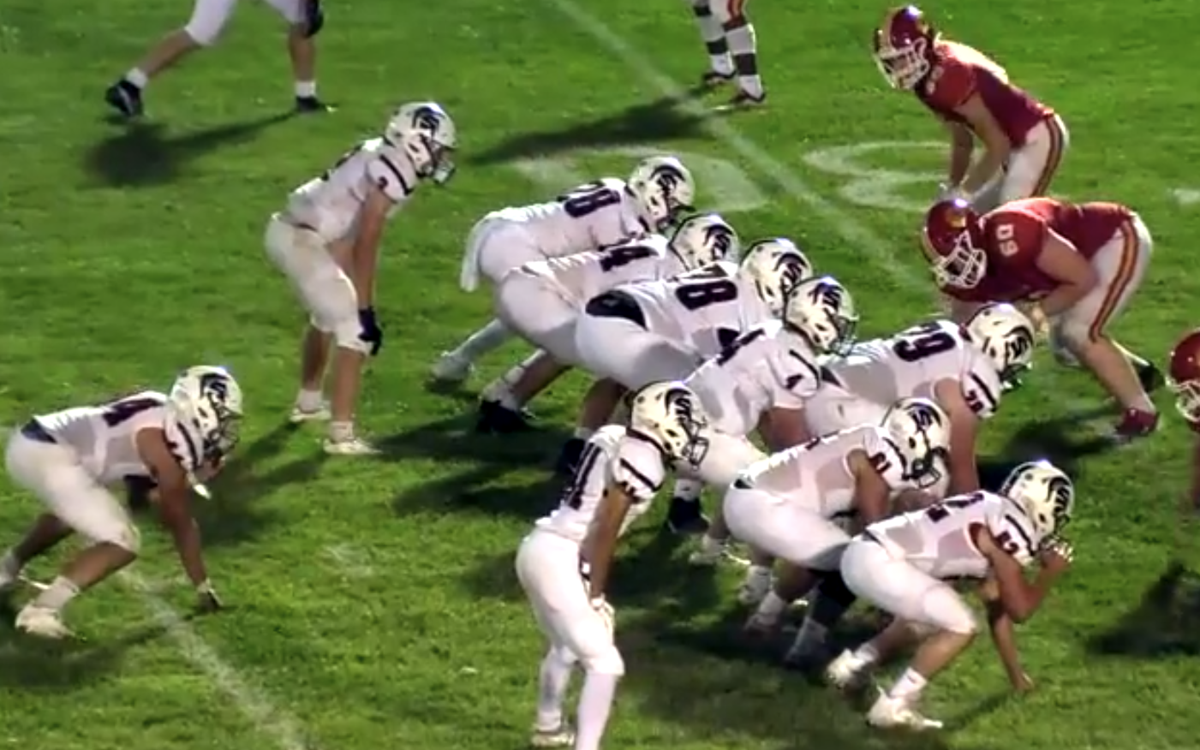 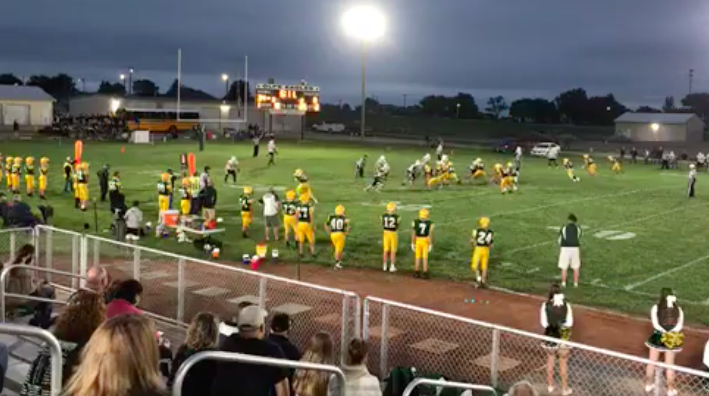 The Olpe Eagles defeated Central Heights 61-14 at home, taking an impressive lead early-on in the game.

The Olpe Eagles defeated Central Heights 61-14 at home, taking an impressive lead early-on in the game.

Emporia earned its first win of the season Friday night, defeating Atchison 32-21 on the road. Senior running back Camden Kirmer shined for the Spartans, picking up 73 yards on the ground to go with a receiving touchdown, a passing touchdown and two interceptions. Quarterback Cale Milleson threw the first two touchdowns of his young varsity career, and a strong defensive effort led by senior Charles Snyder helped push Emporia to the victory. The Spartans are now 1-1.

For a second-consecutive week, the Eagles (2-0) buried their opponent with an early offensive onslaught, dropping 48 first-half points on Central Heights in another blow-out victory.

Transfer running back Chris Olsson took command of Olpe’s crowded backfield in Week 2, rushing for 87 yards and two touchdowns to lead an Eagles rushing attack that finished the night with 235 yards on the ground. Fellow runners Kynden Robert and Derek Hoelting each picked up rushing scores as well, with Hoelting reaching the end zone on a 32-yard run just after halftime.

Junior quarterback Damon Redecker excelled once again under center, completing 77% of his passes for 162 yards and four touchdowns to go with 65 yards and another touchdown on the ground. Redecker spread the ball among his playmakers, tossing touchdown passes to Robert and receivers Jordan Barnard and Gabriel Castillo. Castillo’s touchdown receptions of 26 and 31 yards brought his season touchdown total to three.

Junior linebacker Ted Skalsky led another dominant defensive effort, recording a team-high six tackles as the Eagles held Central Heights to just 69 yards on the ground. The Vikings’ limited offensive success came in the passing game with quarterback Tony Detwiler throwing a pair of touchdowns, but Olpe’s secondary proved sufficiently disruptive for most of the contest as Redecker picked off two of Detwiler’s passes.

Olpe remained dominant in Week 2, eclipsing the 60-point mark for a second-straight game, and the Eagles appear to be a potent 1A force once again in 2020. Olpe returns to the field to host Lyndon on Sept. 18.

In a matchup between two of the area’s most potent offenses, it was the Wolves (2-0) who showed up and put points on the board Friday night, handing Chase County (1-1) its first loss of the season.

The ever-explosive Devan McEwen continued to deliver for Lebo in Week 2, throwing for 111 yards and three touchdowns to go with a team-high 93 yards. Right beside the senior was playmaker Kyle Reese. The junior finished the night with 75 rushing yards, 57 receiving yards and four total touchdowns to help torch the Bulldogs. Lebo’s offensive duo powered the Wolves to 349 yards of total offense in yet another commanding victory.

For Chase County, head coach Brody VanDegrift’s high-flying offense was simply overmatched in the contest. A week after racking up 437 yards against Moundridge, the Bulldogs struggled to get much of anything going at Lebo. Quarterback Mitch Budke led the way with 81 yards on the ground, but Chase County struggled through the air and the offense could do little else against the Wolves’ defense. The Bulldog’s lone touchdown came in the second quarter on a four-yard touchdown run by freshman Brock Griffin.

It was a tale of very different games for two of the most prolific offenses in the area. Lebo’s firepower was on display once again, while Chase County showed it still has plenty of work to do this fall.

The Wolves travel to Waverly on Sept. 18. Chase County is set to host Valley Falls.

Madison’s offense showed its usual strength, but it was the Bulldogs’ defense that stood out in the victory, shutting out a Hartford (1-1) offense that scored 64 points in Week 1.

Madison (2-0) blanked the Jaguars Friday night, limiting Hartford to just 57 yards of offense in the blowout win as linebackers Isaac Miser (5.5 tackles) and Drew Stutesman (4.5) made things difficult for the Jaguars along with the rest of the Madison defense. Hartford quarterback Ali Smith was limited to just 20 yards through the air on 2-13 passing, while running backs Tanner Highley and Shayden Sull, who together ran for nearly 200 yards a week ago, combined for just two total rushing yards.

Offensively, Madison relied heavily on its running game. Senior Hunter Engle set the pace with 89 yards and three scores with fellow senior Brome Rayburn not far behind, adding 79 rushing yards and touchdown of his own. Quarterback Casey Helm seldom threw the ball, but completed 66% of his passes and connected with Stutesman for a 20-yard touchdown in the first quarter.

Madison once again looks poised to make another state playoff run this fall ahead of a trip to Southern Coffey County on Sept. 18. Hartford will look to bounce back on the road at Burlingame in Week 3.

The Wildcats ran through Northeast and held off a late comeback to earn their first win of the season in Week 2.

After suffering a 48-0 loss to Council Grove in its season opener, Northern Heights (1-1) found its groove on the back of Colton Tiffany. The 5-foot-10, 140 pound senior did it all for the Wildcats Friday night, running for 159 yards and adding three touchdowns, including a 59-yard score, to vault Northern Heights in the program’s home opener.

After taking a 22-8 lead into halftime, the Wildcats nearly allowed Northeast to pull even late, but held on to preserve the win by denying a late two-point conversion attempt. Defensive back Aaron Ross recorded a team-high five tackles and contributed to a secondary that held Northeast to just 31 passing yards while senior defensive lineman Cody Medlen served as the defensive anchor for Northern Heights up front.

The win marked the first victory for the Wildcats under first-year head coach Darwin Sweetman and delivered a jolt of confidence to a young team in need of one. Northern Heights will look to carry over its success on the road at Central Heights on Sept. 18.