Sign Up
Log In
Purchase a Subscription
You are the owner of this article.
Edit Article Add New Article
You have permission to edit this article.
Edit
Home
News
Sports
Obituaries
Opinion
Area News
Print Edition
Magazines
Covid19
Classifieds
Subscribe
1 of 7 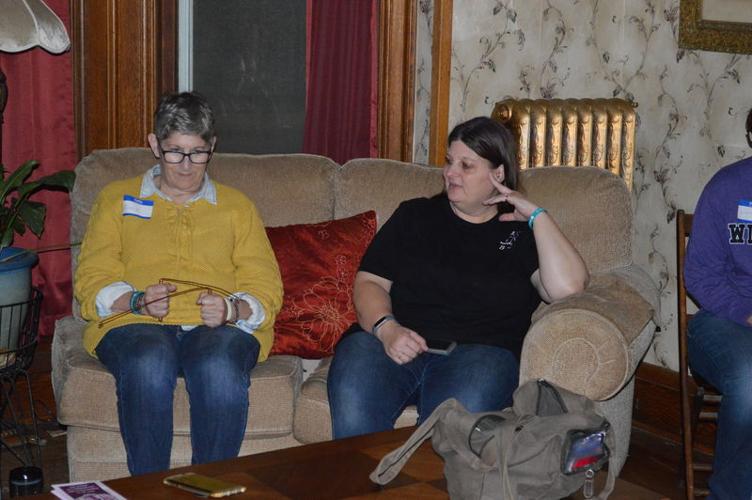 Bonnie Buncher uses dowsing rods to communicate with spirits at Plumb Place while Flint Hills Paranormal Co-Founder Brandy Nance looks on in 2018. What do you see in the window? 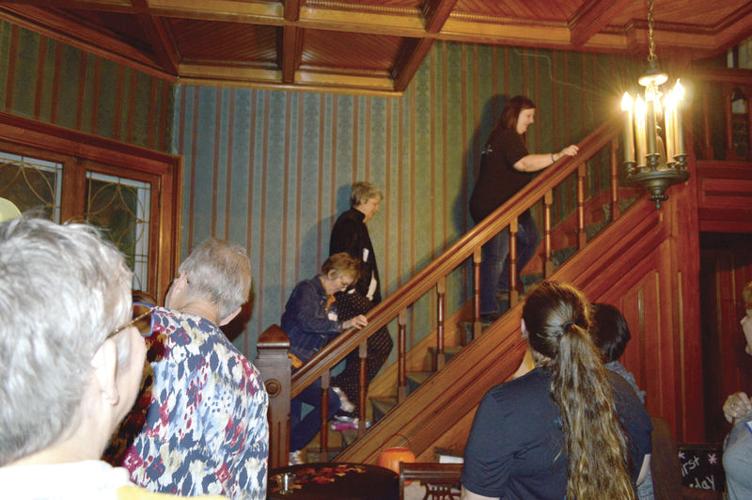 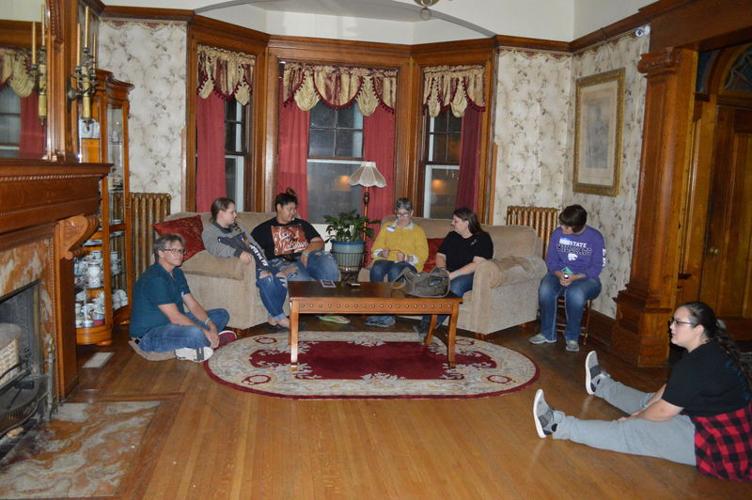 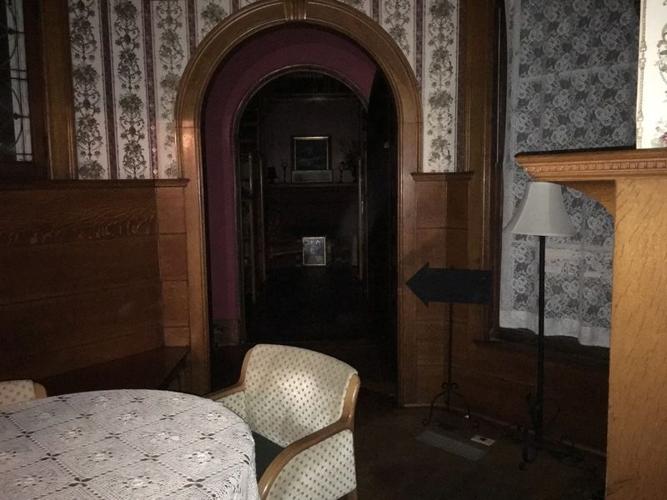 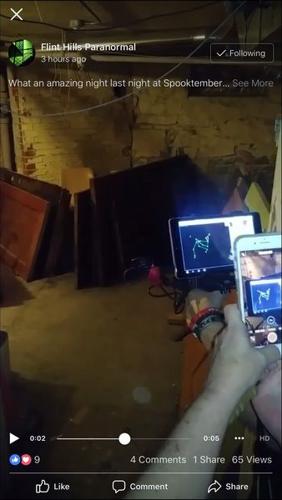 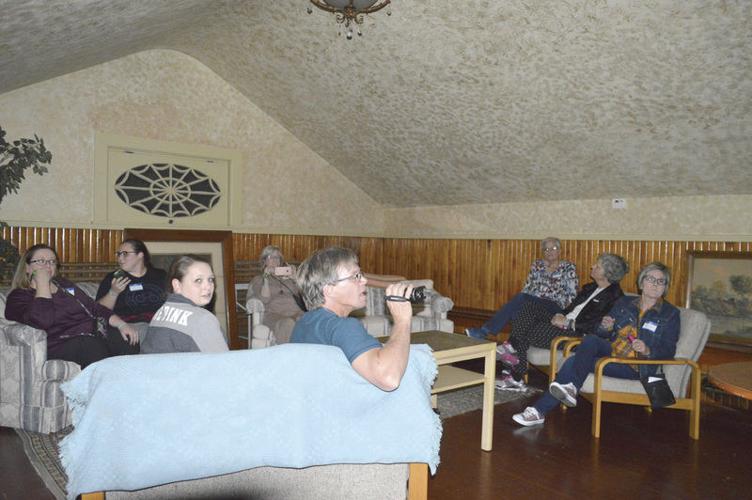 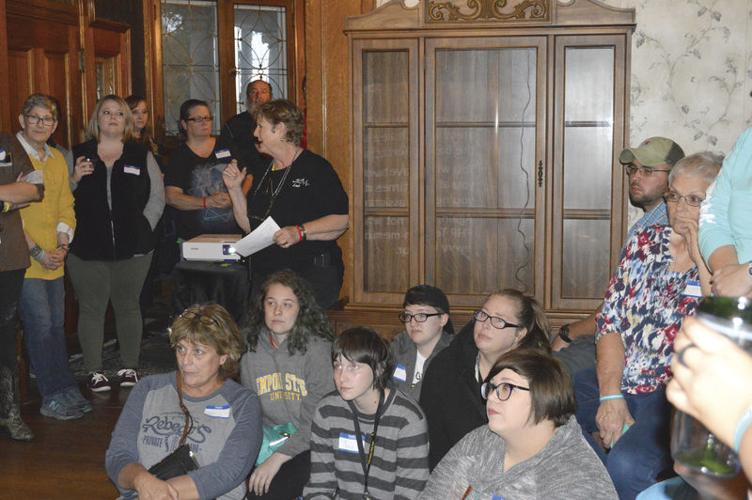 Bonnie Buncher uses dowsing rods to communicate with spirits at Plumb Place while Flint Hills Paranormal Co-Founder Brandy Nance looks on in 2018. What do you see in the window?

Plumb Place was built in the 1870s and was the home of Preston B. Plumb, his wife Caroline and their children. Preston Plumb died in 1891 while in Washington D.C., and in the years that followed, Caroline Plumb began remodeling the home. When she died in 1919, the home was donated to the Young Women's Christian Association and the carriage house was moved forward and converted into sleeping spaces. It has served as a shelter for women since 1921.

The sold-out event gave visitors a chance to experience a paranormal investigation firsthand at the historic home, which has been the subject of ghost stories for decades. Visitors were split into three groups to investigate three areas of verified activity including the basement, the upstairs ballroom and the library. People were permitted to take photographs, videos and recordings in each of the locations. The Emporia Gazette accompanied the group led by Flint Hills Paranormal co-Founder Brandy Nance for the entirety of the tour.

The group's first stop of the investigation was the ballroom, where the group encountered several spirits. As part of the investigation, Nance asked questions in order to identify the spirits, which included at least three members of the Plumb family: Preston and Caroline, and their 2-year-old son Tommy, who died in 1873. The spirits were asked to interact with dowsing rods and an EMF meter to answer questions.

The next stop of the evening was the basement, where sightings of a ghost cat have been recorded. Plumb Place Executive Director Clara Corn said she has seen the ghost cat herself, first mistaking it for one of the home's resident house cats.

"I actually thought I saw Charlie," Corn said. "Charlie is black and white, but this cat wasn't even that color at all. It was so quick and it looked like it ran right in front of me and actually went right into the wall."

While the group did experience some contact with Tommy, the cat did not make an appearance.

Corn has also encountered Caroline Plumb — whom she says is "lovely" — in the home, and has found child-sized handprints on her computer's monitor after returning to work the next day. Jessica Brown, an intern and former resident, said she believes she has also encountered Caroline Plumb in the home, once in the downstairs bathroom, which does not have a locking door.

"I heard the steps of high heels and I opened the door while I was sitting down," Brown said. "I closed the door, and then when I was done I tried opening the door and I could not. I had to wait and then I had to ask permission to be able to open the door."

Brown said she also has had some experiences in the library, including one late night when she was unable to sleep. She found herself in the downstairs library, where full-bodied apparitions of Preston Plumb have been seen, and fell asleep.

"I was very cold, I remember that," she said. "Then I remember waking up in my room, but I have no idea how I got there."

Samantha Lawrence, an art therapy intern, said she works at the shelter overnights two nights a week and has also had some strange experiences.

"There have been a few times where I've seen someone, like, peeking around the corner," Lawrence said. "Sometimes I'll just randomly feel like somebody's watching me. One time I was making some coffee for myself and it was, like, 3 in the morning so I was humming to myself because I had nothing to do. I'm humming to myself and pouring coffee and I hear somebody behind me going, 'hmm hmm.' I'm like, 'Oh yeah, OK,' and then I realized, 'It's 3 a.m. and there's no one around. Somebody just whistled at me.'"

The final stop of the evening was the library area of the home. Full-bodied apparitions of a man, mist-like substances and orbs have all been captured in this area. While in the library, the group experienced little activity, but did hear a loud wail which echoed around the house. Another group also heard the sound in the ballroom at the same time. Several people in both groups were able to obtain recordings of the sound.

Nance said investigations can be a "waiting game" for those involved, but was pleased with the amount of activity that was seen throughout the home on Saturday.

The waiting wasn't a problem for those on the tour, however. Debbie Coleman said she was enjoying the tour, not only for the paranormal experience but also for the history. Coleman said she saw something on her camera as soon as her group went to the ballroom.

"My sister and I saw something immediately," she said. "I strongly believe in the paranormal. My dad passed when my son was 4, and for about four or five years he had a lot of experiences. As a kid, it's not like he was just making up these stories. He was so matter of fact. I would love to go on more tours like this."

Thomas Halleran said he was also enjoying the experience.

"I had an over 30-minute conversation with Thomas Plumb," Halleran said. "I was playing games with him, really. I had those rods and I was just asking him to cross them and then eventually, he was just doing it over and over again. He followed me the entire time and I just told him that because we have the same name we should connect with one another."

Halleran said he was a skeptical believer prior to the tour, but now he was excited to go home with verifiable proof of the paranormal.

"It was incredible," he said. "Any doubts in my mind that ghosts are an actual thing are gone. They are real. I was a mid-skeptic before. I wanted to believe it was possible, but I wanted solid proof. I have my solid proof now."

Flint Hills Paranormal will donate all proceeds of the event to Plumb Place.

"We want to thank everyone including the residents of Plumb Place, the director, and the Board of Directors, for opening up the historical home to such a unique and incredible event," Nance said. "We had people drive in all the way from Oklahoma to be a part of this evening. We are honored that the inaugural event completely sold out. Everybody had a wonderful time and the paranormal events didn’t disappoint.

"The spirits were very active — from knocks, to rattling doors and doors opening by themselves, and even a blood-curdling scream at the end of the night that two groups heard. Capturing these events in this number in one evening is rare, so the public got a real treat. The money from tickets totaled over $1,000 and will be donated to Plumb Place."

For more information about the group visit www.flinthillsparanormal.com.