A security camera caught the moment when a driver knocked over a pedestrian traffic pole at Seventh Avenue and Commercial Street Tuesday. 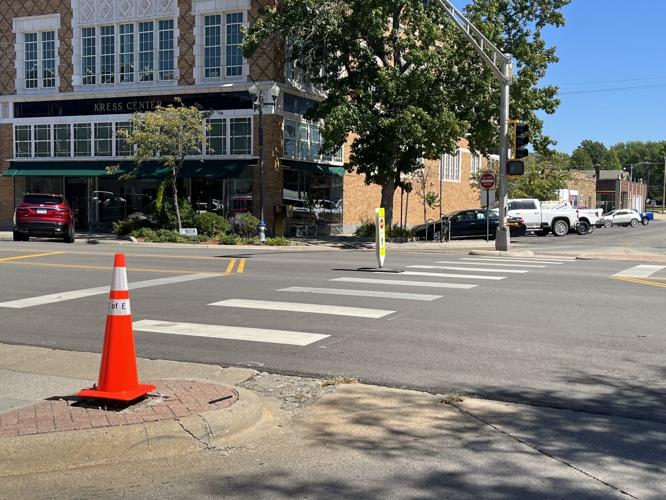 A security camera caught the moment when a driver knocked over a pedestrian traffic pole at Seventh Avenue and Commercial Street Tuesday.

Downtown Emporia could be short one traffic light for the rest of the year, after a driver sent it crashing to the ground Tuesday morning.

Security video posted on Facebook showed a driver bumping into a pole at Seventh Avenue and Commercial Street during the 7 a.m. hour. Even though the speed appeared slow, that was enough to knock the pedestrian light pole over.

“Poles are meant to break away when struck. ... It protects the driver and passengers involved,” city communications manager Christine Johnson said in an email to The Gazette.

Johnson said the city is not liable for the cost of replacing the pole. But doing the replacement is another matter.

“If the city does not have the parts to repair [the] traffic light on hand,” Johnson noted, “it may take up to six months to order replacement parts.”

She clarified Wednesday that the city is not yet sure if the parts are on hand.

Police released a statement saying Rebecca Peres, 60, blamed the collision on the rising sun being in her eyes. While she was cited for careless driving, she put her vehicle in reverse after the collision and was not hurt.

A yellow crosswalk notice now stands in the middle of the intersection. Commercial Street was closed for about 15 minutes while the damage was cleared.

Saturday’s storm brought a light pole down at 12th Avenue and Industrial. Johnson said that pole has a different design and is the property of Evergy.

NOTE: This story has been revised to clarify the parts situation involving the city.

I wish they'd straighten the road there so people can turn either way.