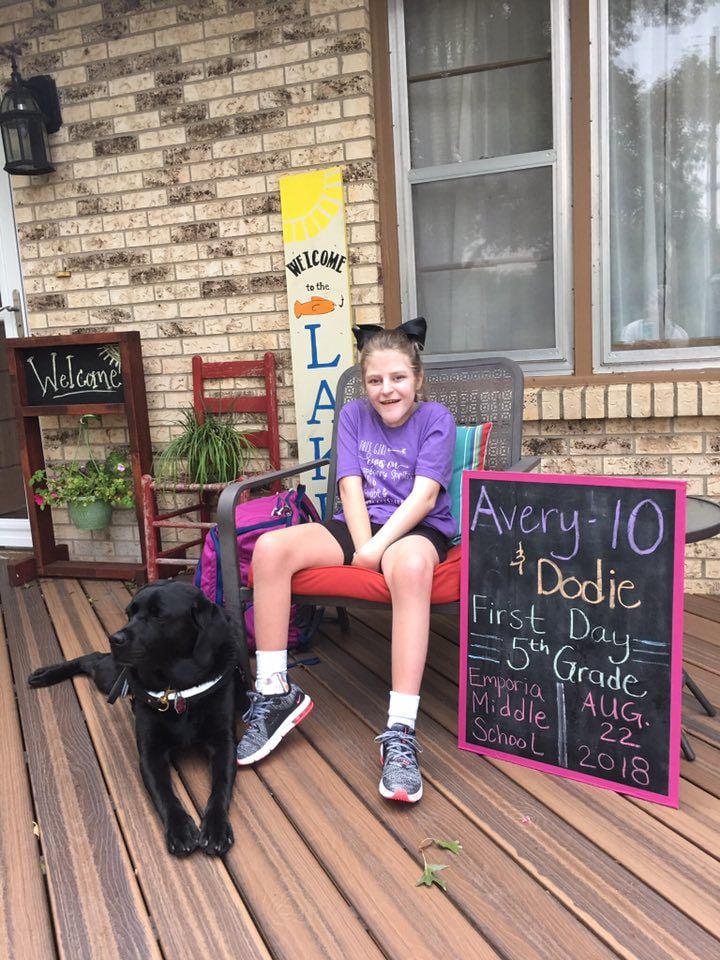 Avery Evins and her service dog, Dodie, are an inseparable pair whose birthdays are only a few days apart. 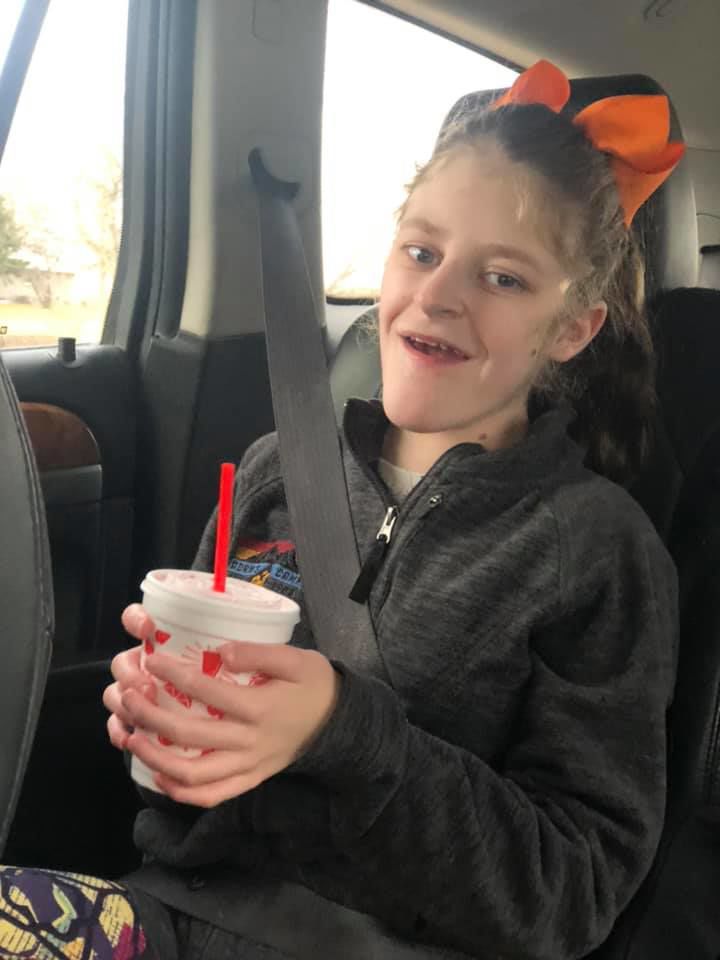 Avery Evins is hoping to receive a lot of birthday cards this year. 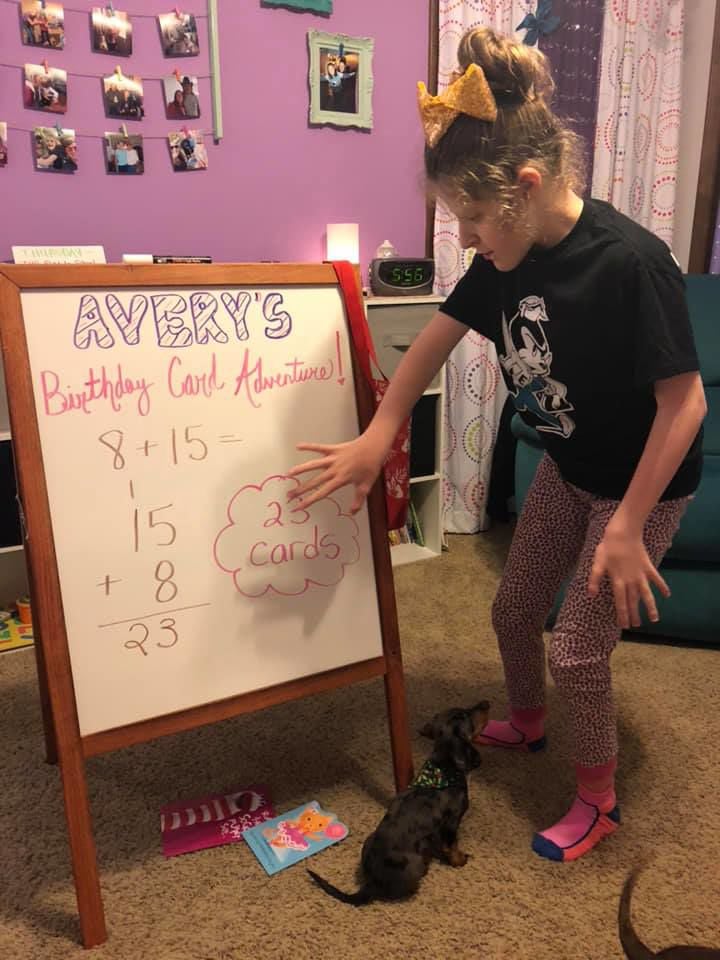 Avery Evins enjoys counting how many cards she receives each year during her annual card adventure.

Avery Evins and her service dog, Dodie, are an inseparable pair whose birthdays are only a few days apart.

Avery Evins is hoping to receive a lot of birthday cards this year.

Avery Evins enjoys counting how many cards she receives each year during her annual card adventure.

An Emporia Middle School sixth-grader has just one wish for her upcoming birthday.

Avery Evins, who is turning 12 on Wednesday, would love for as many people as possible to take part in Avery’s Birthday Card Adventure — a card shower organized by parents Laura and Josh Evins several years ago to help Avery understand how special birthdays really are.

“Avery has never really cared about her birthday, she doesn’t care about Christmas,” Laura said. “She never wants presents, and birthday parties are overwhelming so we thought, what if we put it on Facebook and have everybody send her birthday cards?”

Avery suffered from a hemorrhage on her brain at birth which led to the development of hydrocephalus and the need for a shunt. She underwent brain surgery at just 2 months old. Afterward, Avery was diagnosed with a chromosomal syndrome called 2p Trisomy 10q Monosomy, Autism Spectrum Disorder and scoliosis.

Over the years, Avery has overcome a number of significant communication and motor ability challenges. While Avery is nonverbal, she can communicate using an app on her iPad.

“What really amazes us is Avery’s ability to communicate with us,” Laura said. “Even though she’s completely nonverbal, she’s learned how to use her iPad to communicate and all of her therapists and all of us have shown her how to communicate using these communication apps with voice output. She got her first iPad when she was about 2, and now she can type sentences, she can tell us stories and whatever she needs to tell us now.”

But, like any pre-teen, sometimes Avery just isn’t in the mood to talk.

“She deleted her app off of her iPad three different times a couple of weeks ago because she just did not want to talk to her teachers,” Laura said with a laugh.

Avery’s progress with communication is not the only challenge she’s met head-on.

Just last week, she graduated from physical therapy — meaning she can walk and navigate stairs independently. That’s something Laura said doctors weren’t sure Avery would ever be able to do without the assistance of a walker.

Five years ago, Avery was matched with her service dog, a black lab named Dodie who follows her everywhere, who has helped her to be more confident and connect with her peers more in school.

Every milestone has been celebrated by a growing number of supporters both from the local community — many of whom helped the Evinses raise the funds necessary to bring Dodie home — and on social media, who have followed Avery’s progress over the years.

“Facebook has been a way that people can keep up with Avery and her story,” Laura said. “This has just kind of grown each year as a way to celebrate her birthday and it’s great, because her birthday was never a big deal to her. Now, it’s a big deal and she can recognize, ‘It’s my birthday. People care about me.’ Autism is a very common word in our society right now, but I feel like a lot of people don’t really understand what it is. I think it’s important that even though an individual might have special needs — like autism — they want to be treated the same way that everybody else does, and their families want them to participate and enjoy life to the fullest. This is our way of making a birthday normal for her.”

Most importantly, Laura said, is for people to know just what kind of person Avery is.

Avery’s the girl that loves raspberry Sprite drinks and milkshakes from Sonic Drive-In, playing math games on her iPad, Thomas the Tank Engine or watching shows like Max and Ruby on Nick Jr. She loves hugs and kisses, snuggling with Dodie and going to art and gym class at EMS.

And, of course, she loves birthday cards.

Anyone wishing to send Avery a card this year can send mail to Avery Evins, 21 Locust Lane, Emporia, KS, 66801.

Search for “Avery’s Birthday Card Adventure” on Facebook to stay up-to-date on how many cards she receives this year.

"Now, it's a big deal and she can recognize, 'It's my birthday. People care about me.'"