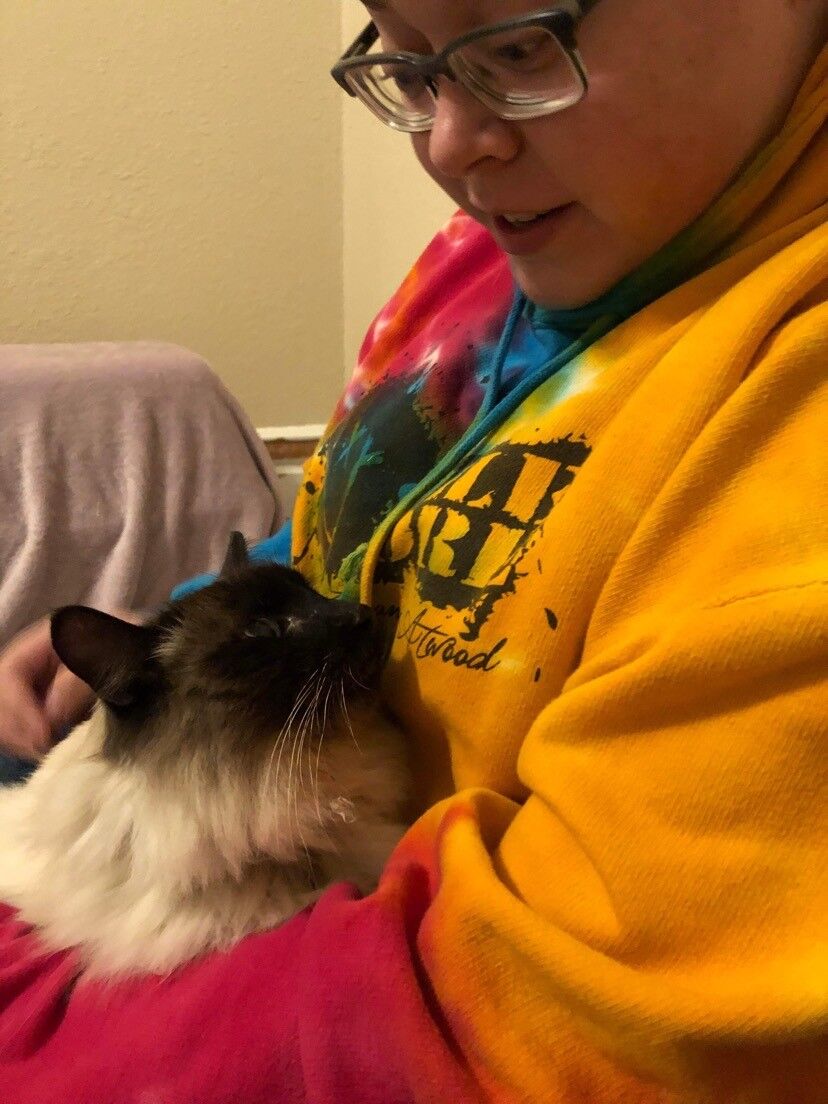 Shortly after the two were reunited, Molly Chenault snaps a picture of Boyce and Ezzy. Boyce said this was the first moment they thought Ezzy recognized them. 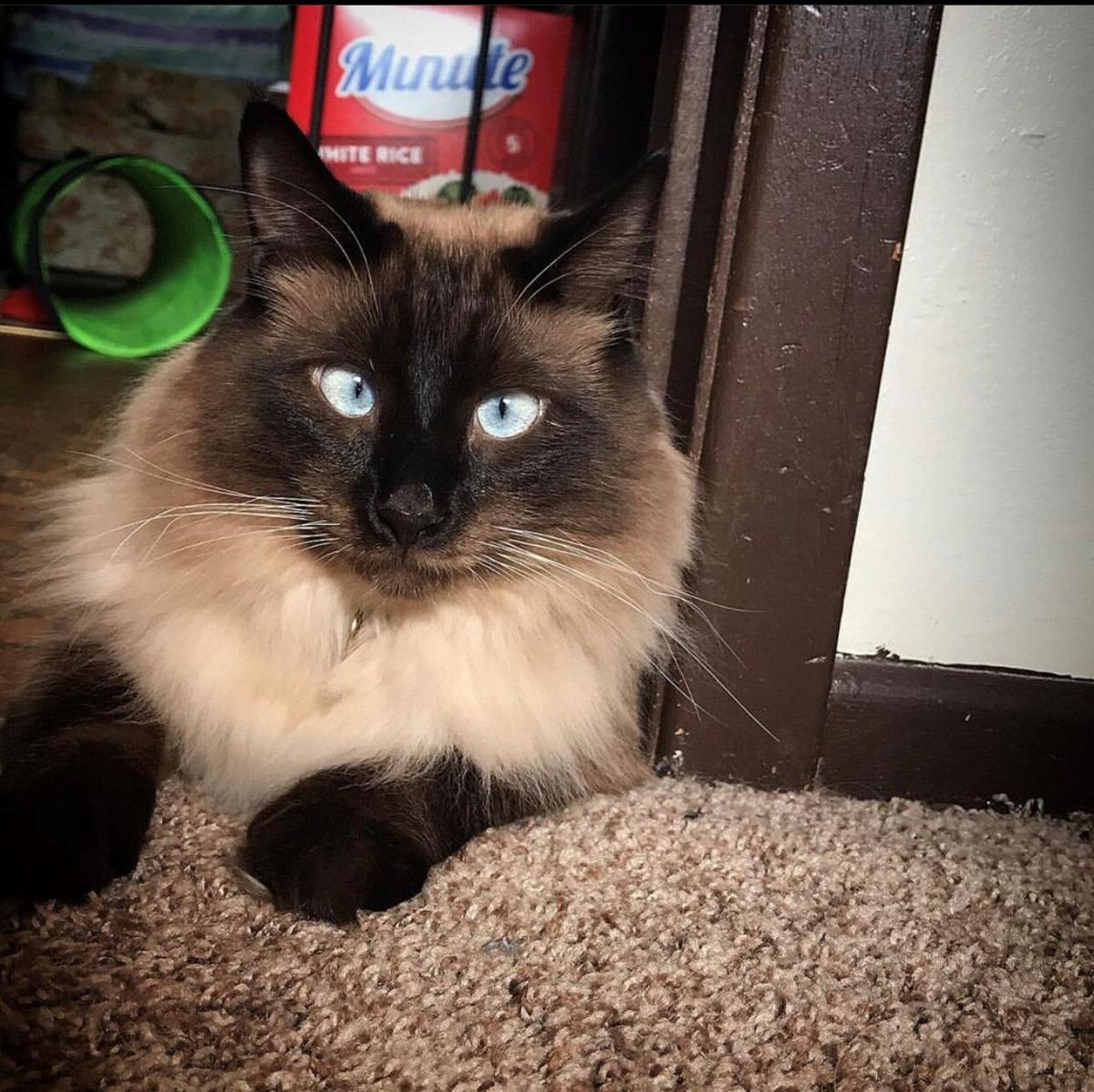 Kasey Boyce takes a picture of Ezzy after he is finally back home.

Shortly after the two were reunited, Molly Chenault snaps a picture of Boyce and Ezzy. Boyce said this was the first moment they thought Ezzy recognized them.

Kasey Boyce takes a picture of Ezzy after he is finally back home.

They say it takes a village to raise a child. Sometimes it takes one to find a missing cat.

Kasey Boyce was living in an apartment in Emporia, with their cat, Ezzy, when in Sept. 2020, the apartments caught on fire. Although Boyce was able to remove Ezzy from the building, he was scared by the noise from the fire trucks and ran away.

Boyce, along with help from the Street Cats Club, had been on the search for Ezzy ever since. That is, until Dec. 12, when the two were finally reunited.

“We ran outside, and as soon as he got outside, I still have the shirt that he tore through because he scratched me really bad jumping out of my arms,” Boyce said. “That was the last I saw of him.”

Because of the fire and the commotion that was going on at that time, Boyce didn’t immediately process that their cat was gone.

“As I was impatiently sitting across the street, waiting for my family to show up, I was like, ‘Oh, Ezzy’s gone now.’ I was hoping he would resurface and I would find him, but I should have known better,” Boyce said.

Shortly after Ezzy ran away, Boyce posted on Facebook, letting their friends know that he was missing. One friend, Molly Chenault, was helping the next day, searching everywhere for the missing cat with no luck. Chenault is also friends with Victoria Partridge, who is the founder and director of the Street Cats Club. The group quickly began helping with the search.

“[Chenault] had called [Partridge] to come and help actually re-search the building to make sure that he didn’t run into the building, which probably was frowned upon, but they didn’t care. They went in anyway,” Boyce said. “I want to say it became a passion project.”

The Street Cats Club had gotten close to trapping him many times but were unsuccessful. Ezzy stayed in the neighborhood that he used to live in, even though the building was completely bulldozed.

One time during the summer, Boyce saw Ezzy while taking their sister home. The cat ran across the street, and the two tried to catch him, but they weren’t able to.

“That restored a little bit of my hope, and I just kind of had to hope that he was really running the streets and making the best of it,” Boyce said. “I don’t think he was, but I had to tell myself that and I had to let it be.”

Partridge had been talking to people throughout the community and handing out SCC’s cards, which led her to Patty Fancher. Fancher had been a colony caregiver for numerous cats in her area and realized that she was caring for a cat that looked similar to Ezzy.

Partridge and Sarah Peacock, who is the TNR [Trap-Neuter-Return] coordinator, arrived at Fancher’s house at 6 a.m. Dec. 12. They captured Ezzy during the cats’ normal feeding time.

“[Fancher] went back there to feed them and she comes back to the living room and says, ‘He’s there! He was one of the few that showed up this morning!’” Partridge said.

Partridge and Peacock were certain that this cat was Ezzy because of his collar.

“One of the things that Kasey did that was excellent and I think was such a huge, huge lesson for all of us who own animals to know is that Ezzy had a collar on,” Partridge said. “To know that, to have that confirmation was just awesome.”

Following Ezzy’s capture, he was brought back to Peacock’s house so he could be checked for fleas and injuries, as well as give him a space to become accustomed to indoor living again.

Shortly after Ezzy had been brought inside, Boyce received a call from Chenault, and let them know that Ezzy had finally been caught and that he was in Peacock’s house. When Boyce arrived at the house, Ezzy was laying in Partridge’s lap.

“She just picked him up and plopped him in my lap, and I cried immediately,” Boyce said. “Even though he’s home with me now, I still don’t feel like it’s real.”

For Partridge, the best part about reuniting the two was Boyce’s face after being without their cat for so long.

“[The best part was] seeing Kasey’s face when they walked into the room, and Sarah and I were just sitting there and, just to know that we had finally reunited them … like Ezzy is actually home,” Partridge said.

Boyce took Ezzy to the vet for a check-up and, to their surprise learned that the cat was in great shape despite his extended stay outdoors.

And now, thanks to the help from the Street Cats Club, Ezzy is finally home again just in time for the holidays.

“I want to make sure to pass along my gratitude to all of the community who helped keep an eye out for him, who let me hang posters in their shops, who let the Street Cats Club and myself wander into their yards/cellars/garages, and to the people who help keep the stray cats fed,” Boyce said in an email. “Those people are the real MVPs.”

"One of the things that Kasey did that was excellent and I think was such a huge, huge lesson for all of us who own animals to know is that Ezzy had a collar on."

“She just picked him up and plopped him in my lap, and I cried immediately. Even though he’s home with me now, I still don’t feel like it’s real.”

What a warming Christmas story. I'm happy to hear that Boyce and their cat has been reunited. If Ezzy could share stories of his last year.... Merry Christmas and Happy New Year.