Sign Up
Log In
Purchase a Subscription
You are the owner of this article.
Edit Article Add New Article
You have permission to edit this article.
Edit
Home
News
Sports
Obituaries
Area News
Print Edition
Magazines
Covid19
Classifieds
Subscribe
1 of 5 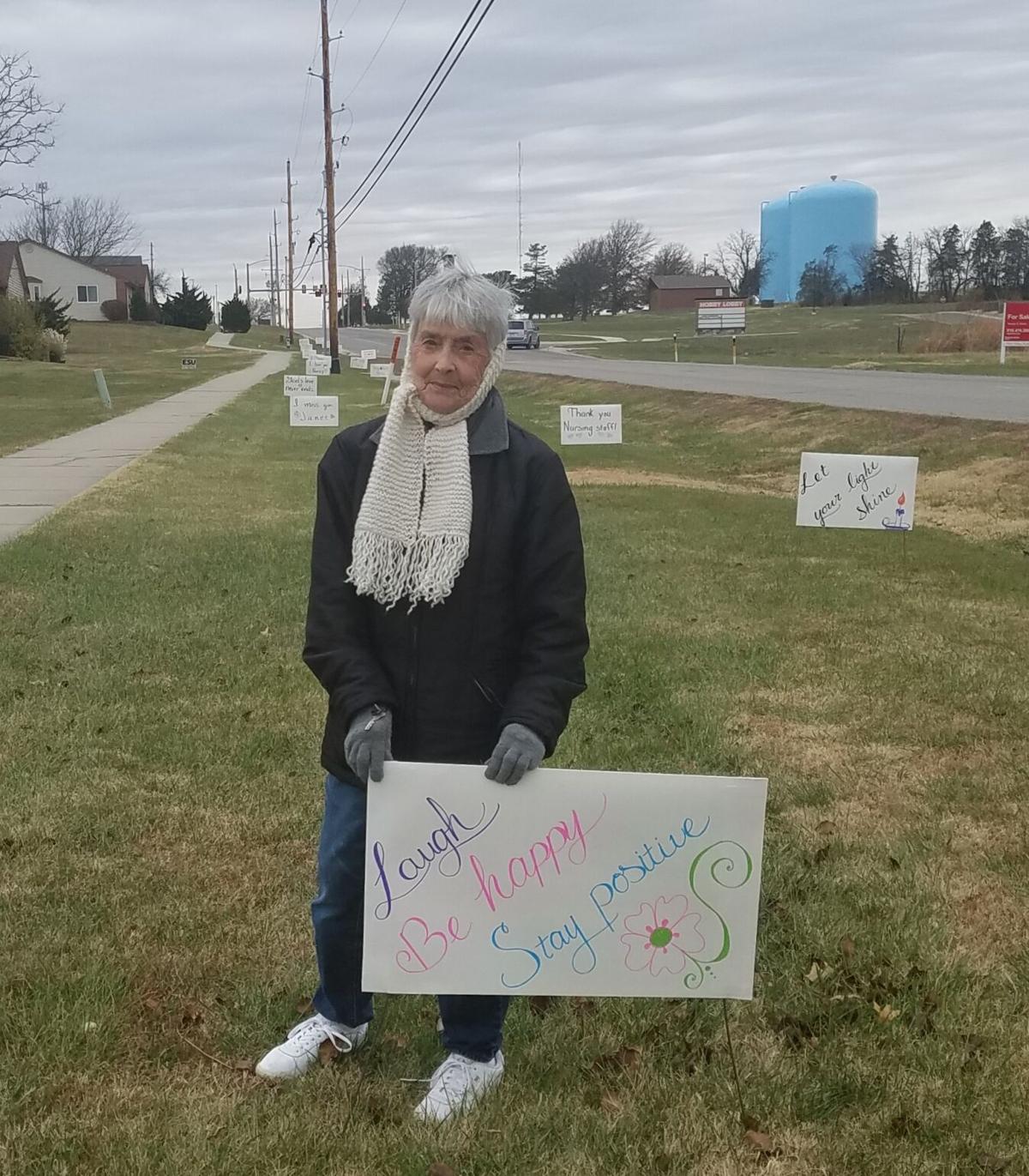 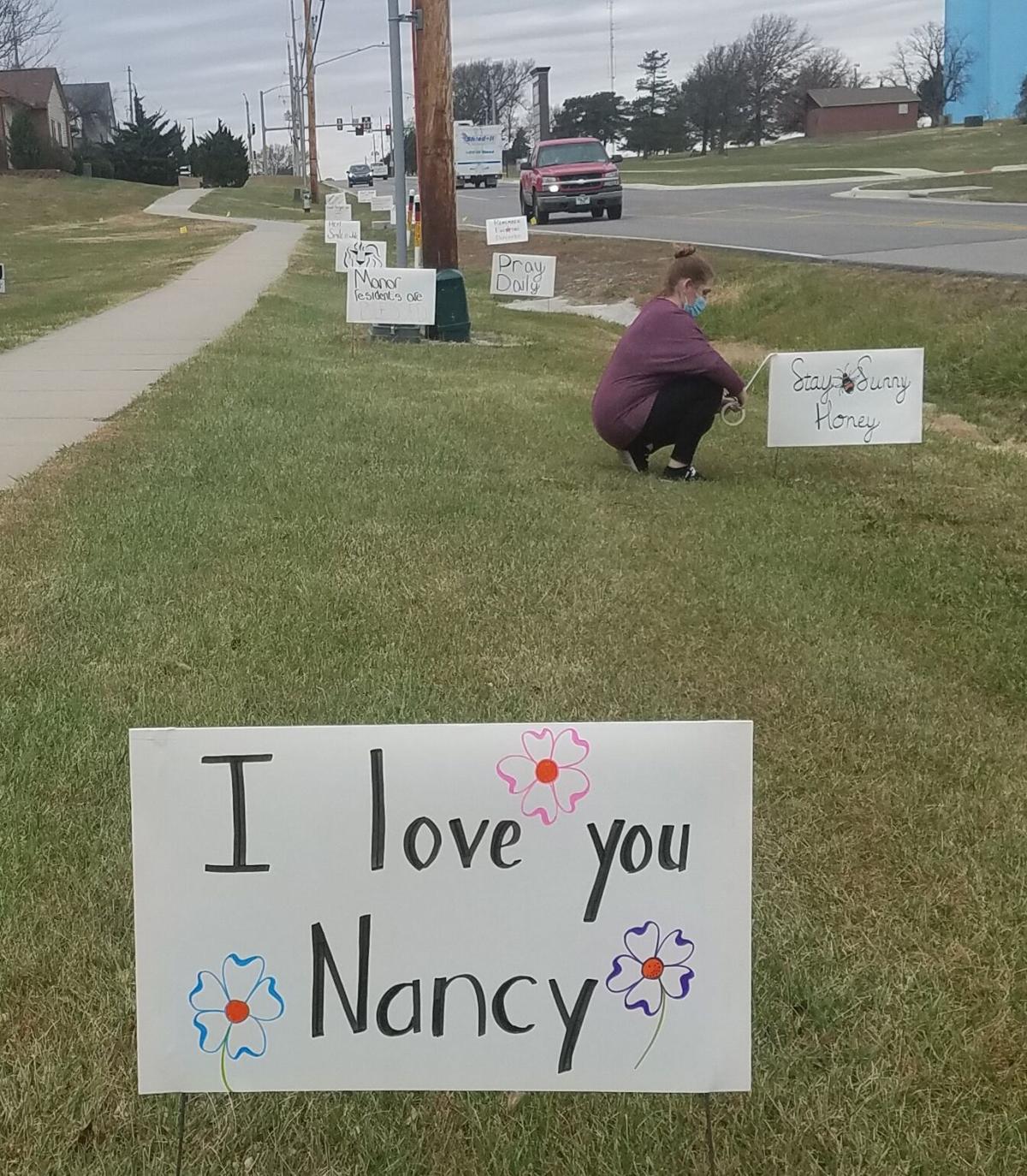 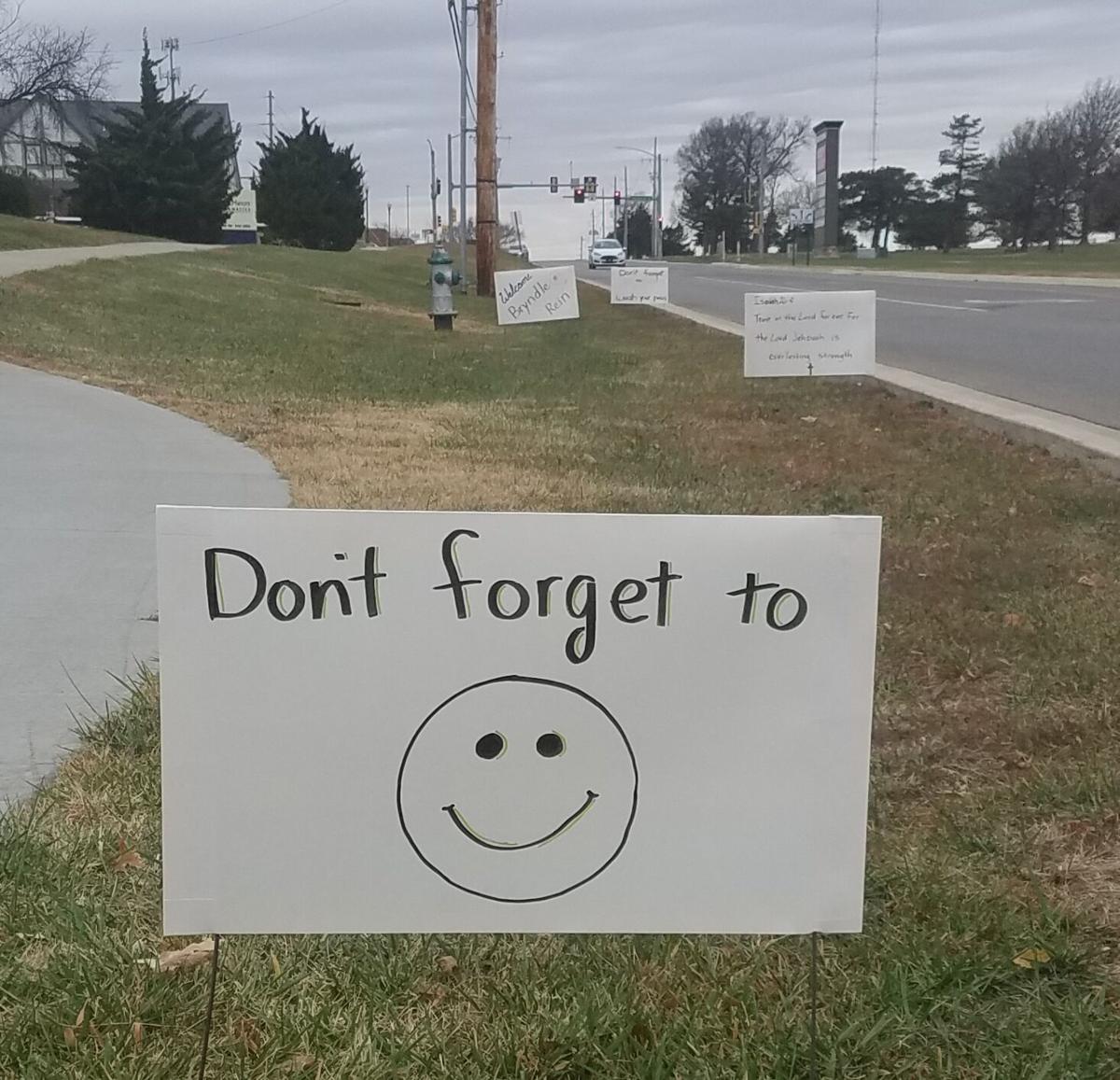 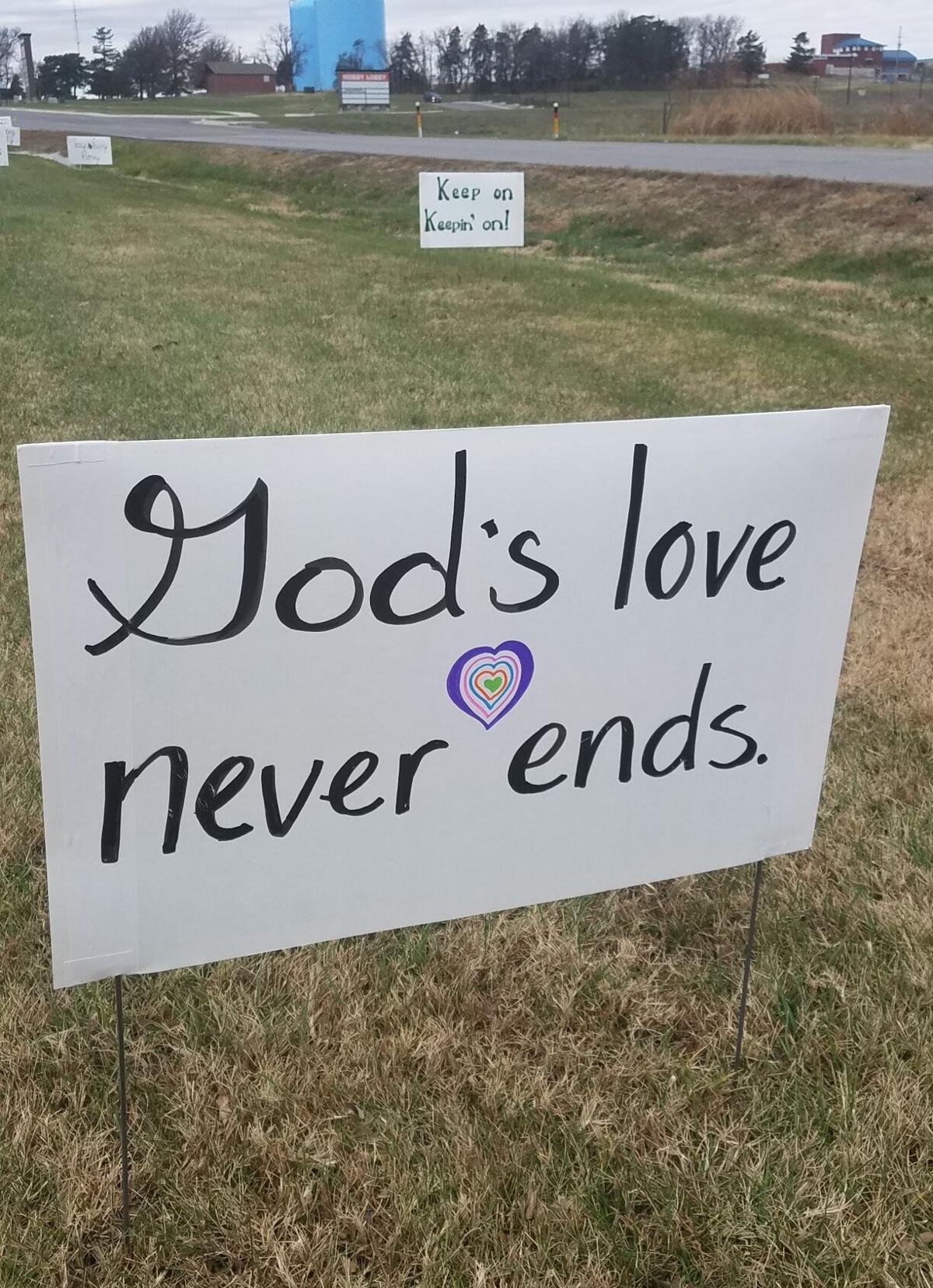 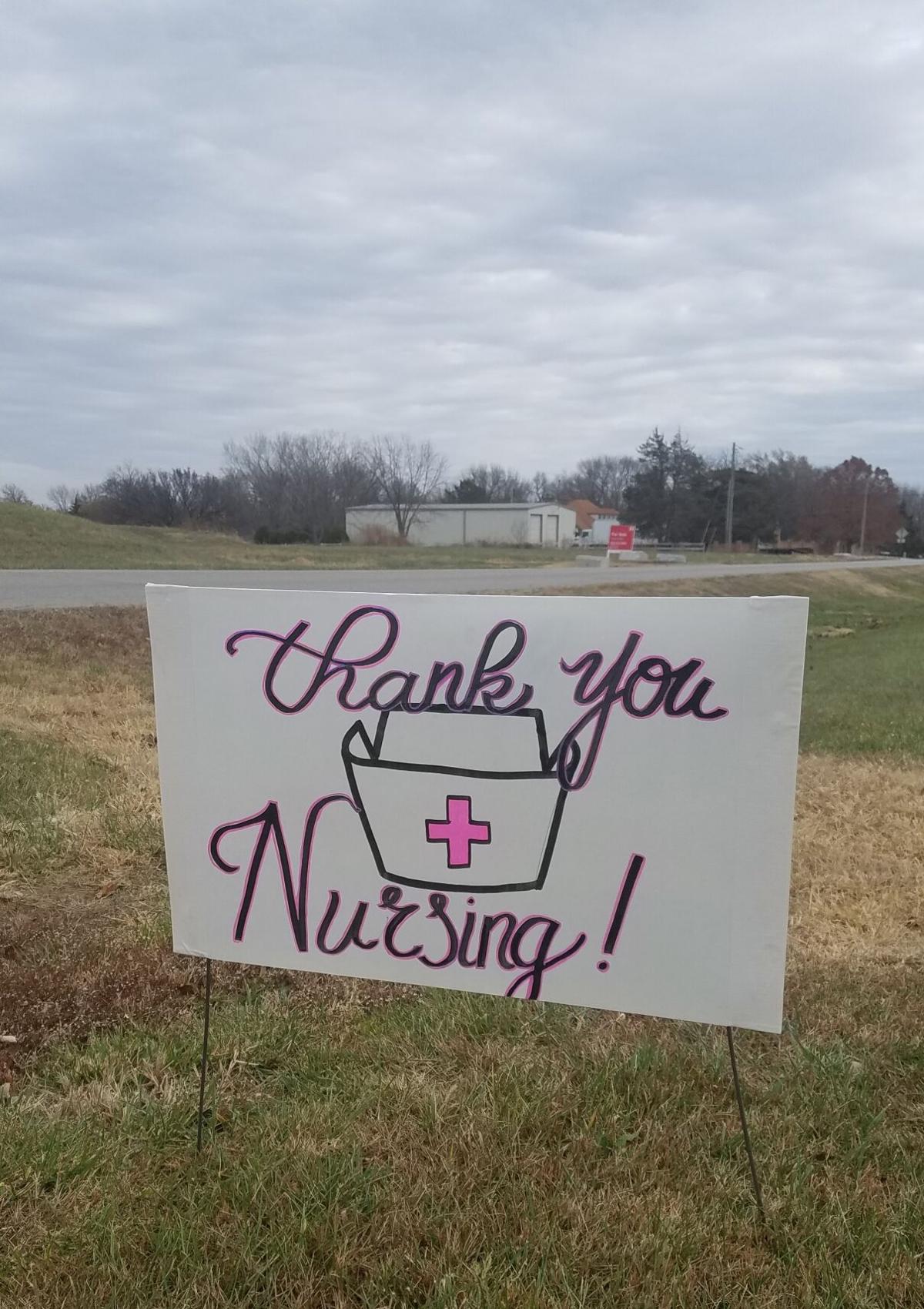 While the state’s political races may have already been decided for the year, the staff and residents of Emporia’s Presbyterian Manor are still putting plenty of election signs to good use.

Those passing by the facility in recent weeks will have noticed dozens of the custom-made signs spread along 24th Avenue, with many offering words of encouragement to the community and others relaying messages to all the friends and family members unable to visit their loved ones in person due to the pandemic.

The initiative initially began as a small scale, indoor art project, but has developed into something much more for all involved according to Manor Activities Director Jen Moran.

“A while back, my friend Joyce Madore, who is one of our nurses at the Manor, asked me if I’d heard about people using old political signs to make artwork...” Moran said. “We started brainstorming together about where I might be able to find political signs, and what kinds of projects the residents might like to do. It started as an indoor art project. We were going to paint over the signs, then hand out supplies to residents who were interested in making an art piece. I then realized that the signs were meant to be outside, and that the project would be more fun to put in the lawn so that we could share it with the community… There seemed to be more interest from our residents in these kinds of projects.”

After receiving a large donation of signs from Lyon County Democrats member Kelly Atheron, Manor leadership began to brainstorm ways they could best be put to use. After initially choosing to spray paint the signs and brush on primer in order to provide residents with as many blank canvases as possible, staff soon found they could rapidly speed up the process by simply turning them inside-out with some clever stapling and taping. From that point, it was up to residents to bring the creativity.

“My staff and I sent out flyers to the residents about the project, and have also asked many of the residents directly about what they would like to have put on the signs,” Moran said. “Some of our residents told us their favorite Bible verses, while others took the opportunity to send messages to loved ones who they haven’t seen in quite some time. Many residents have shared certain images or animals that they are known for, or that their family members would recognize as being from them. For instance, the idea for the sign that says ‘The wise old owl says ‘stay safe’’ came from one of our residents who collects owls. Another resident enjoys painting lighthouses, so we added a lighthouse to her sign.”

Moran recalls being struck with just how much thought and care went into the creation of each resident’s sign, finding that most saw the opportunity as not just a fun diversion, but something that could be truly meaningful for those feeling downtrodden or exhausted by the year’s events.

“I found it interesting that some people had multiple ideas right away, while others wanted a day or two to think about what they wanted on their sign,” she said. “It’s been fun hearing what different residents feel is most important to share with the community. That’s really our goal with this project: to share our words of encouragement, our advice, and our love with the people of Lyon County. The pandemic has been very hard for many of our residents. They miss going places with their family members and having visitors at the Manor. This has been a way for us to think outside of ourselves and our personal challenges, and — we hope — to make a difference in other people’s lives.”

She hopes to see community members provide feedback on the project moving forward, whether taking a picture with their favorite sign or reaching out to contact the writer of a message they may have found particularly uplifting or valuable.

“We’ve asked community members, especially those who walk along 24th Avenue, to take a selfie of themselves next to their favorite signs, and send them to our Facebook page, @EmporiaPresbyterianManorPMMA,” Moran said. “We’d love to be able to share the community’s support with our residents.”