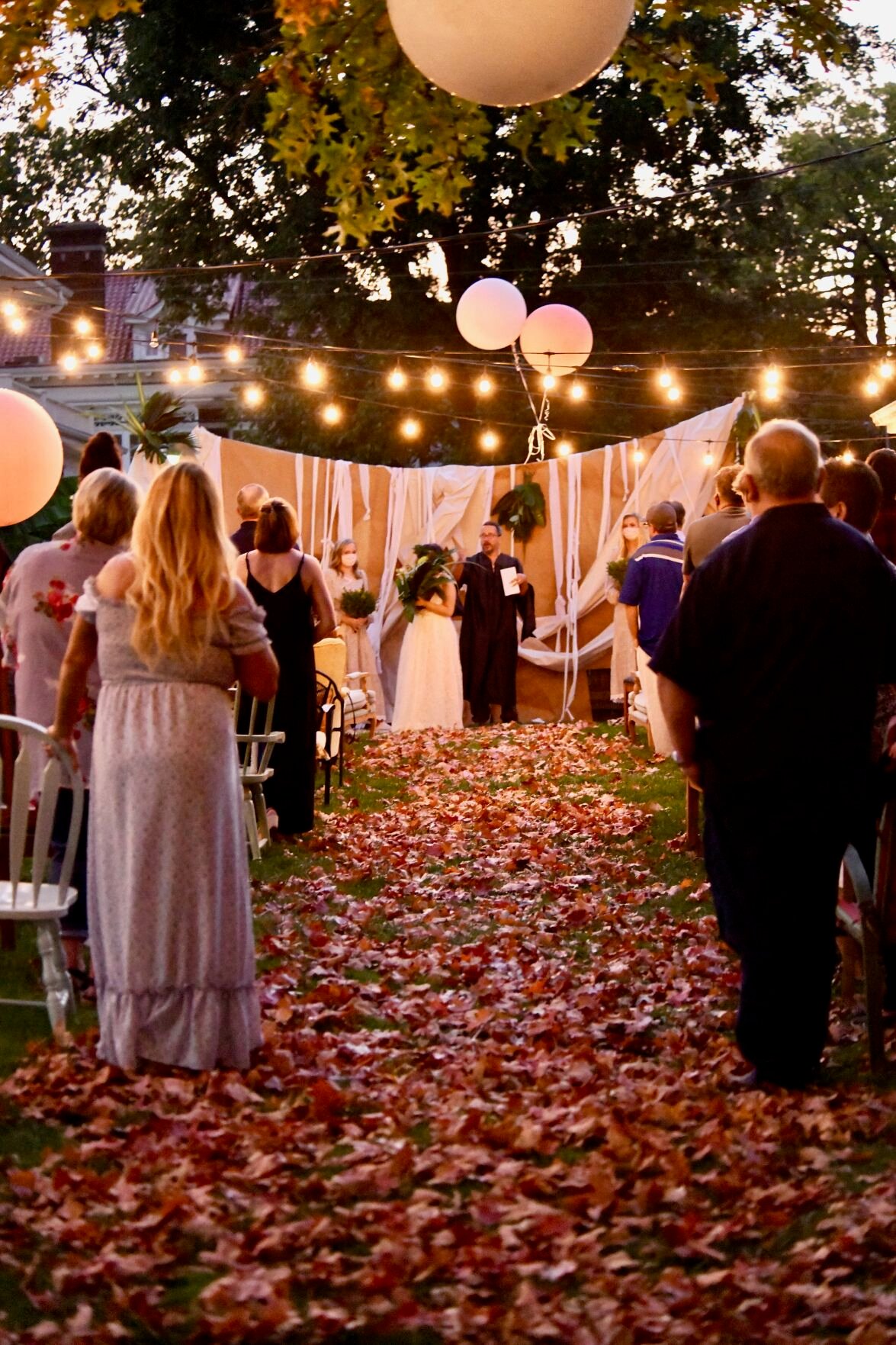 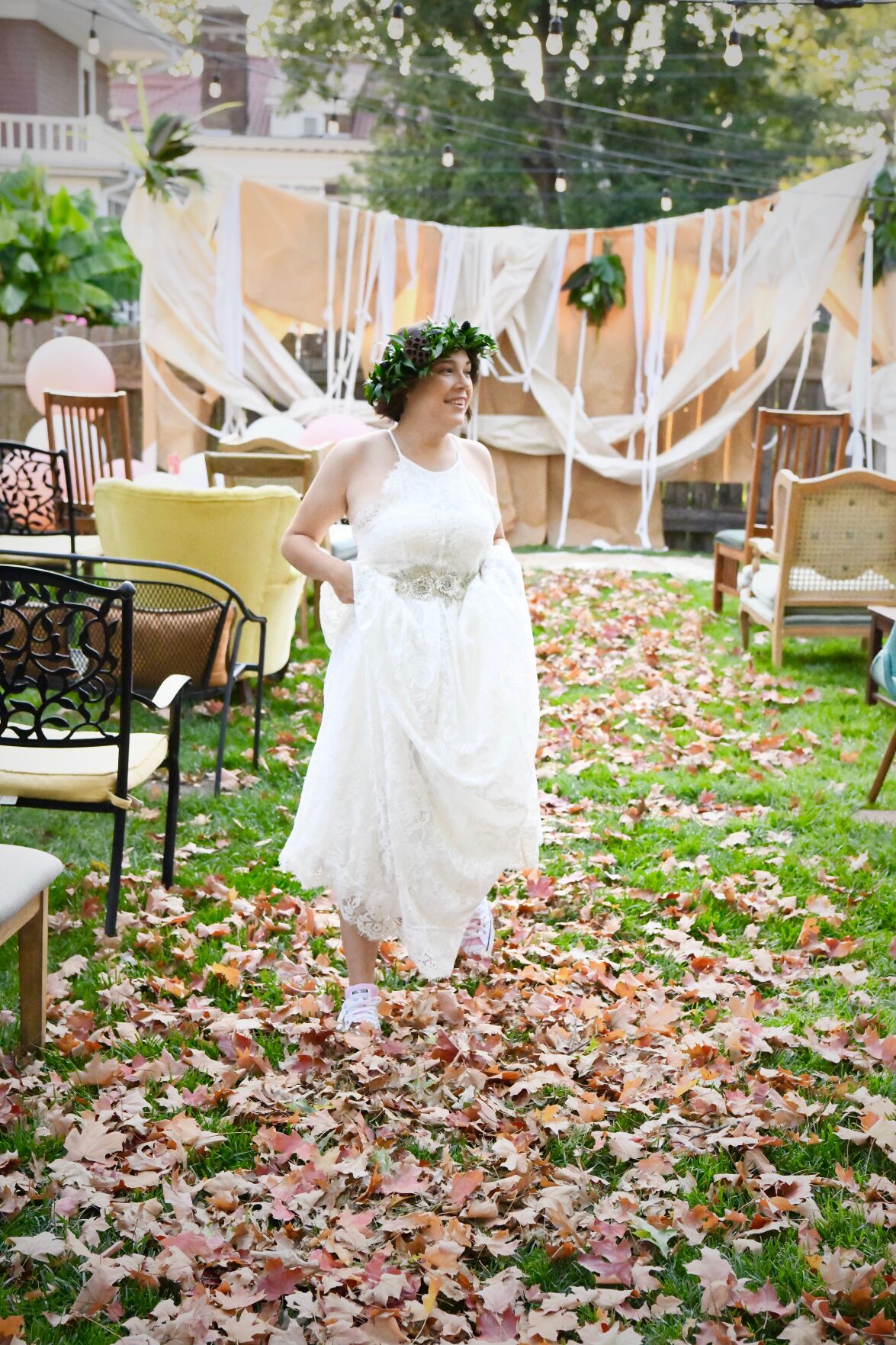 Emma Main is all smiles as she wears a stunning white wedding dress, Saturday evening. 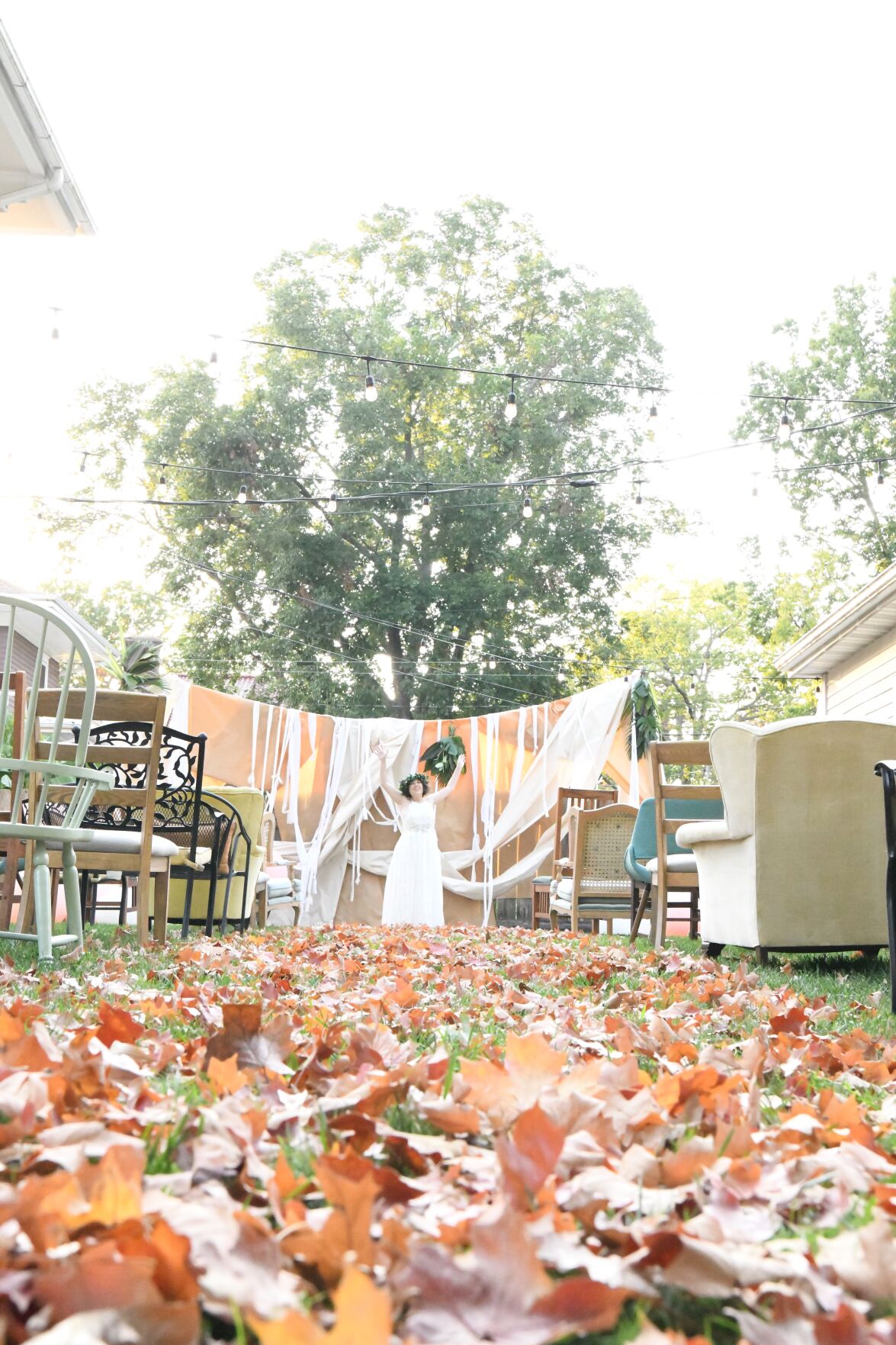 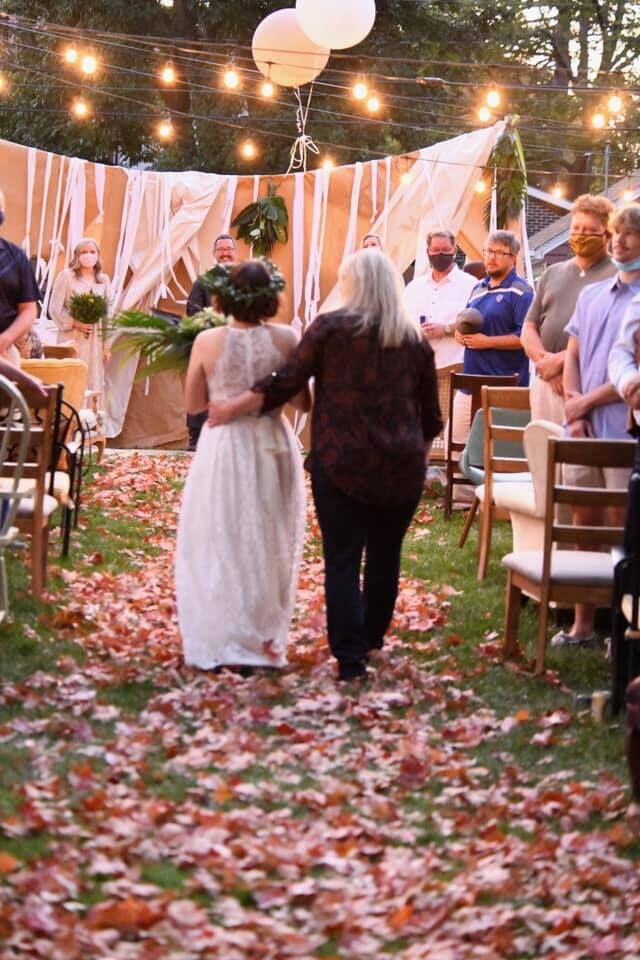 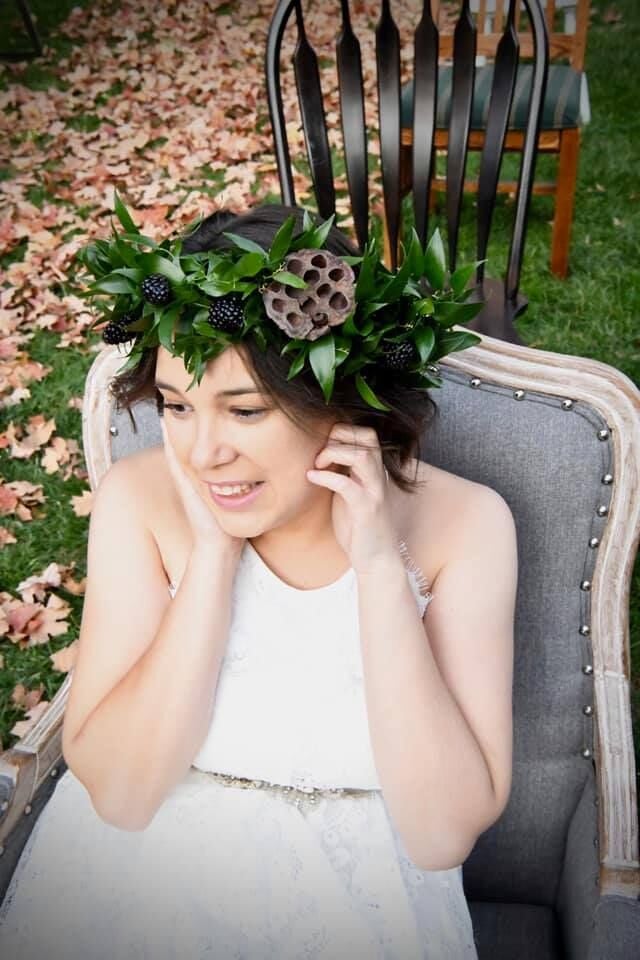 Above, Emma Main smiles as she prepares for her wedding dress party, Saturday evening. Right, Emma walks down the aisle. 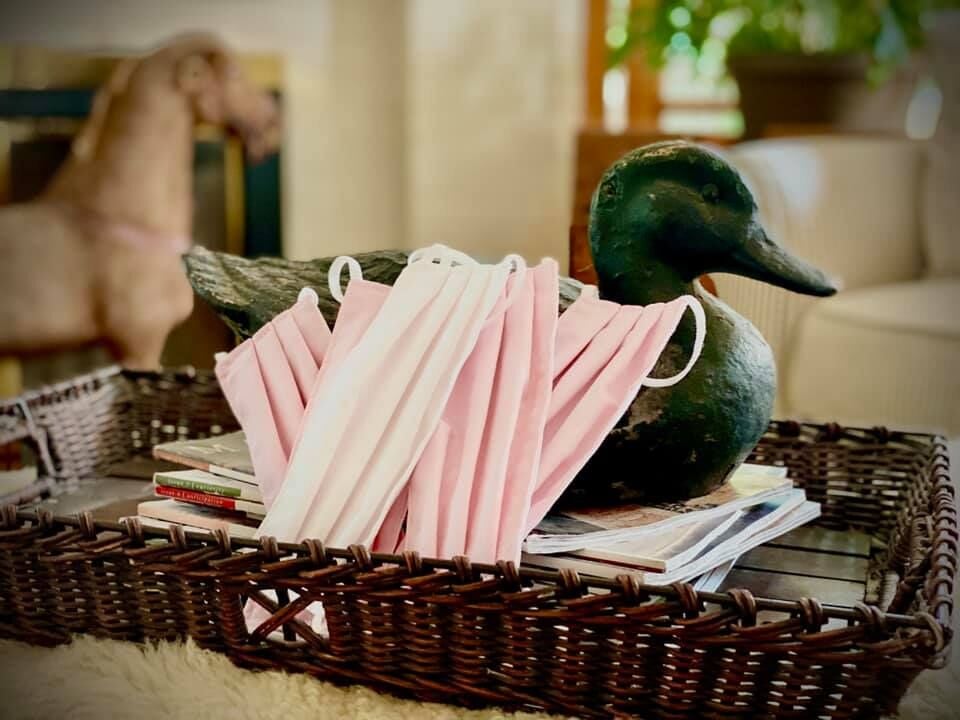 Emma Main is all smiles as she wears a stunning white wedding dress, Saturday evening.

Above, Emma Main smiles as she prepares for her wedding dress party, Saturday evening. Right, Emma walks down the aisle.

Although the festive lights, music, decorations and dresses could’ve fooled anyone unfamiliar with the situation into thinking Emma Main’s Saturday soiree was a genuine wedding, it was perhaps something even more meaningful.

Organized by Main’s mother, Clarine Hibler, Main’s siblings and a host of other relatives and family friends, the celebration followed a traditional wedding format, perhaps with the exception of the presence of another partner and the water balloon-throwing send off. The officiant also chose to focus on telling guests his favorite — and often funniest — stories of the bride, forgoing the recital of vows in favor of a tale of the time when Emma covertly and unknowingly chose to replace a drink in one of her school lunches with a can of beer.

“I actually decorate and help throw other events along those lines,” she said. “Emma thinks that I have something of my own every summer or fall with the weddings, but I didn’t have any this year. I looked at her and asked, ‘Do you want to have a wedding?’”

While the overall attitude of the night was nothing but cheerful, the event actually marked the near 26th anniversary of a day that was initially filled with fear, sadness and uncertainty for those closest to Main; the day of her diagnosis.

Emma has a severe form of autism, often forcing her to utilize strict, structured environments and schedules to adapt to the unique challenges she faces on a daily basis. The ongoing COVID-19 pandemic has been especially disruptive to Main and others sharing conditions like her own, causing her support group to look for positive distractions whenever and wherever possible.

For Hibler, throwing an event celebrating Emma’s life and the joy she has given to those around her just seemed right considering her schedule during a more typical fall.

“Emma is going to be 27 here in November, and Saturday basically marked 26 years ago to the day of her diagnosis,” Hibler said. “They simply referred to her as being ‘autistic,’ and she is severely autistic, but the terms for exactly what she has have changed a lot over the years as autism has become more studied and understood. ... She can speak words, and she can speak sentences when she wants to, but her communication skills are hindered and everything might not make sense.

“She’s someone who wouldn’t be able to get a job, most relationships will be hard ... she’ll never be married. It’s a lot different than the milder forms or situations involved with Asperger’s or other forms of autism you might see where those people can successfully do a lot of those things.”

Hibler said the family first noticed something was amiss about a year after Main’s birth. Emma would no longer react to the sight of other people or look back at close family members, initially causing her parents to believe she simply had trouble hearing. She also had yet to speak her first words.

“It was actually kind of funny to begin with. Emma wouldn’t be looking at us, but I could open a bag of cookies or something and she’d immediately perk up and give it attention,” Hibler said. “So, we began to see it as more of a selective hearing type of thing. When I finally went to the doctor and said, ‘Something’s going on with Emma’ and explained things, he started to recognize some patterns. There was another little boy that had just been sent to the KU Medical Center and had been diagnosed with autism.”

Not long after the initial recommendation, Main’s parents visited the same facility with Emma, soon learning that she was also autistic.

“At the end of all the tests, they sat down and confirmed it,” Hibler said. “It was definitely the type of situation where you get an instant lump in your throat. I, of course, asked ‘What does this all mean?’ and that was one of the scariest things, because at the time, they really couldn’t tell me what all it meant. They just knew something was wrong … It was something that we kind of had to learn about as time went on.”

Even if the initial learning process for Hibler was at times tiresome, discouraging and emotionally taxing, the majority of the remainder has been “rewarding,” in most simple terms. Over the years, Emma’s autism has evolved from being seen as some unknown and unpredictable force of worry into an intrinsic part of who she is, changing not only Main’s life in a positive way, but the lives of her family and friends.

“She’s a joy in our lives and the lives of anyone who meets her,” Hibler said. “To me now, almost 27 years later, being autistic is just Emma’s personality, not some scary condition she has. I can’t imagine her being any different. The simple amount of joy she can bring to us with the smile on her face from just throwing a water balloon, is incomparable. Not everyone gets to experience that, but we get to.”

“To me now, almost 27 years later, being autistic is just Emma’s personality, not some scary condition she has. I can’t imagine her being any different."