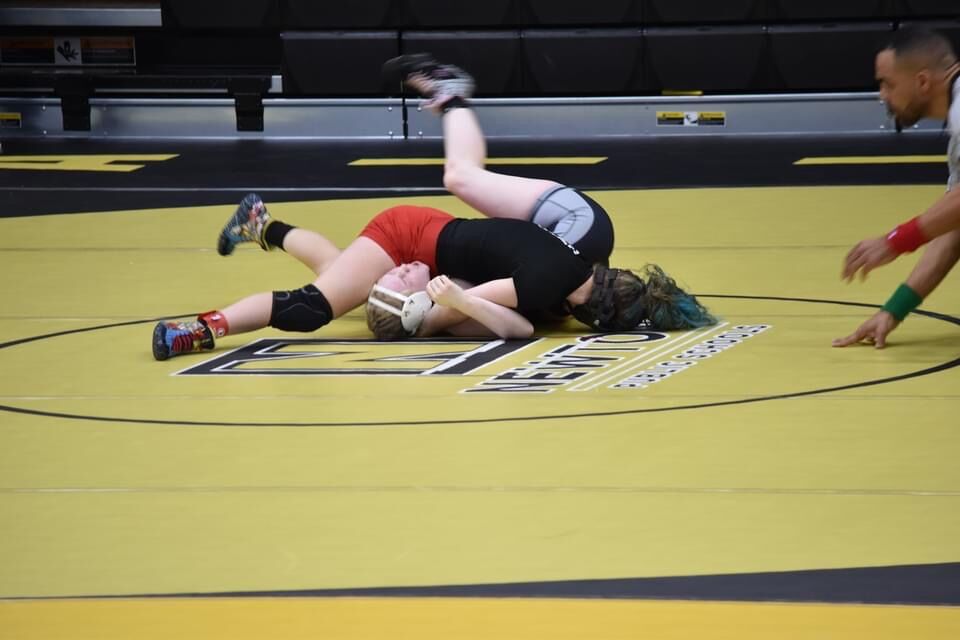 Emporia High’s Madelynn Griffin attempts to pin an opponent in Newton on Thursday. 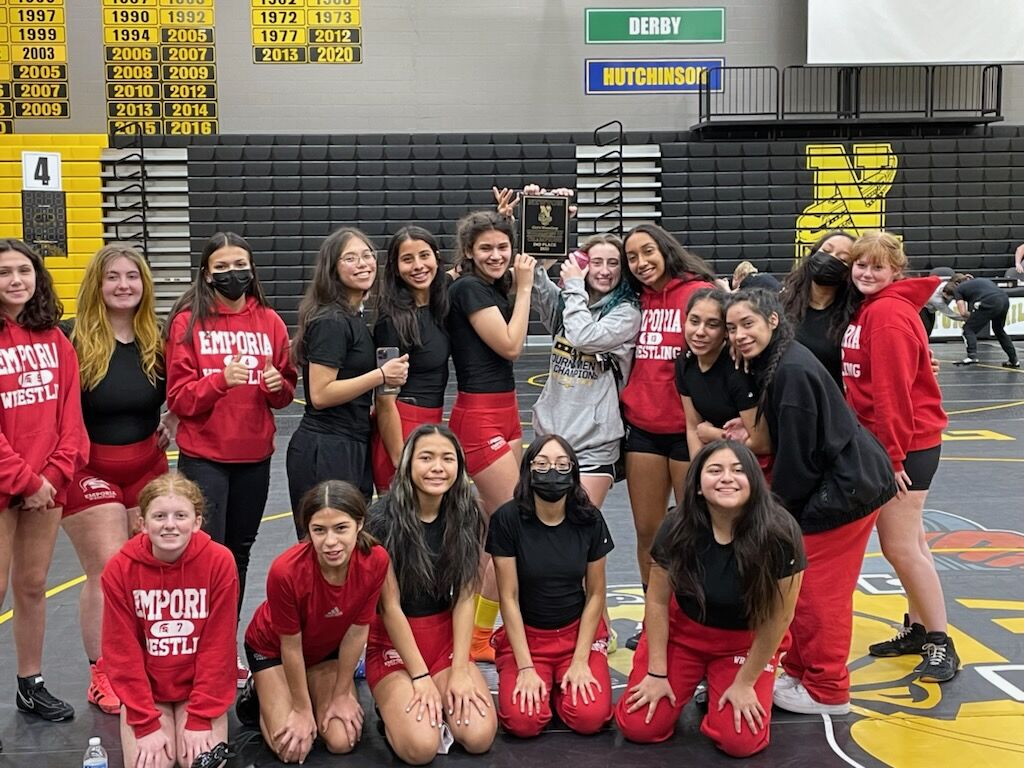 The Emporia High girls wrestling team celebrates its second-place finish at the Newton Tournament of Champions on Thursday. 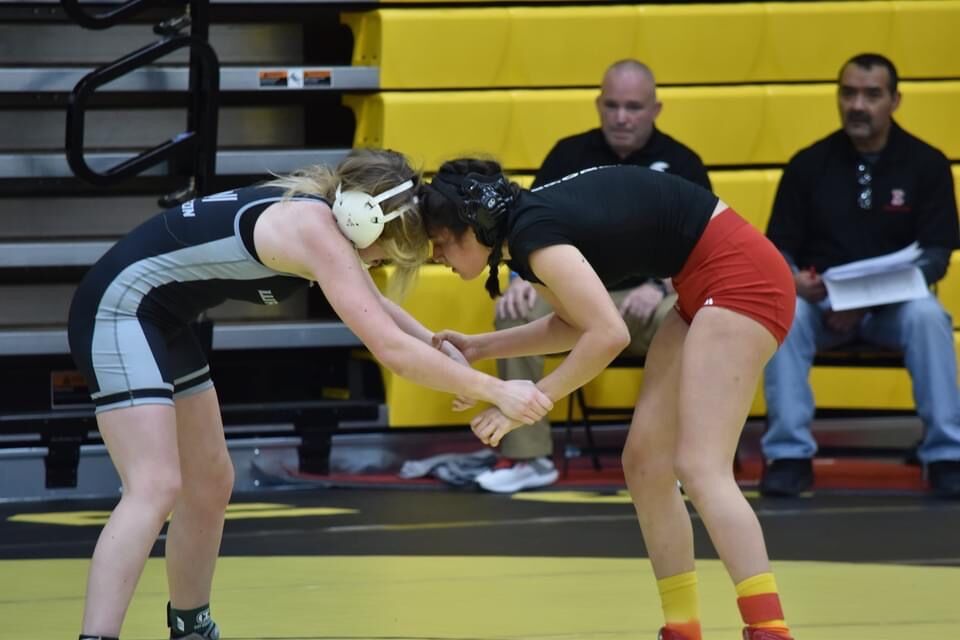 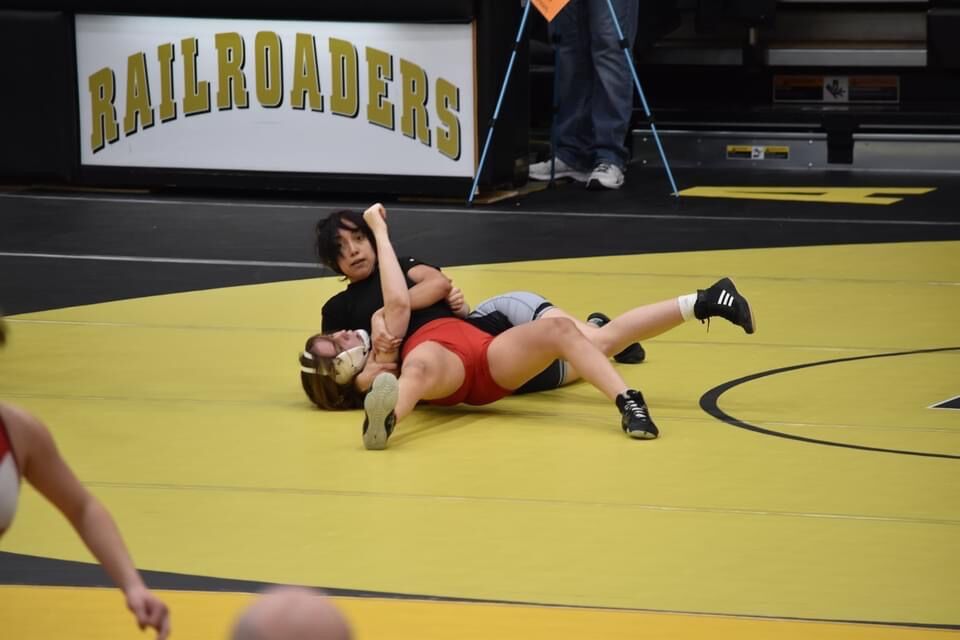 Emporia High’s Madelynn Griffin attempts to pin an opponent in Newton on Thursday.

The Emporia High girls wrestling team celebrates its second-place finish at the Newton Tournament of Champions on Thursday.

NEWTON — The No. 6 Emporia High girls wrestling team went 4-1 to take second out of six teams at the Newton Tournament of Champions on Thursday.

The tournament format was a round-robin of dual matches and the Spartans grappled against No. 2 Washburn Rural, No. 7 Garden City, Division II No. 2 McPherson, Newton and Centennial, a school from Texas.

“The girls wrestled very well,” said Spartan head coach Shawn Russell. “They all battled, gave everything they had in every match.”

Russell said the team was open at several weights and that he had to shake up his lineup somewhat.

“Several girls wrestled up a weight and gave everything they had,” he said. “It was great to see them come together as a team and do what they needed to do to help the team.”

Keosybounheuang, Griffin, Munoz, Dismuke and Turpin won for Emporia against Centennial. The score was tied 33-33, and the Spartans were declared the winners by criteria for giving up the least number of forfeits.

Emporia doubled up Garden City 48-24 as it got wins from Keosybounheuang, Griffin, Munoz and Estrada. Flores-Delgado, Esparza, Dismuke and Turpin won by forfeits.

The Spartans wrapped up the day with a 36-30 win over McPherson. Munoz, Estrada, Keosybounheuang and Adriana Hernandez (143) had match wins for the Spartans while Griffin and Flores-Delgado won by forfeits.

“Their hard work, dedication, and sacrifice showed tonight,” Russell said. “I know I have said this before, however a total team effort from the lightest weight to the heaviest. Super proud.”

The Spartans will have the weekend off before wrestling in Independence next Saturday.

“We will keep working and improving on the little things that can make or break a match,” Russell said.

The dual with Paola was tight throughout as the two squads traded individual wins. With the score tied 30-30 going into the final match, Spartan senior Turpin pinned Kayleigh Wurtz to deliver Emporia the 36-30 win.

“Going into the last match with it tied was exciting,” said Spartan head coach Shawn Russell. “I was even more excited for Alexis when she was able to get her opponent on her back and get the victory.”

“That was a fun dual,” Russell said. “We had to make adjustments to our lineup and brought in some junior varsity girls to wrestle. They stepped up and battled and did their thing.”

The Spartans made more adjustments in their dual with Seaman and won 39-24.

“It is always a battle when we see the Seaman girls,” Russell said. “We made some adjustments to put some of our girls in where they were open.”

“Although we wrestled well tonight, we still have some little things to work on,” Russell said. “Very proud of them.”