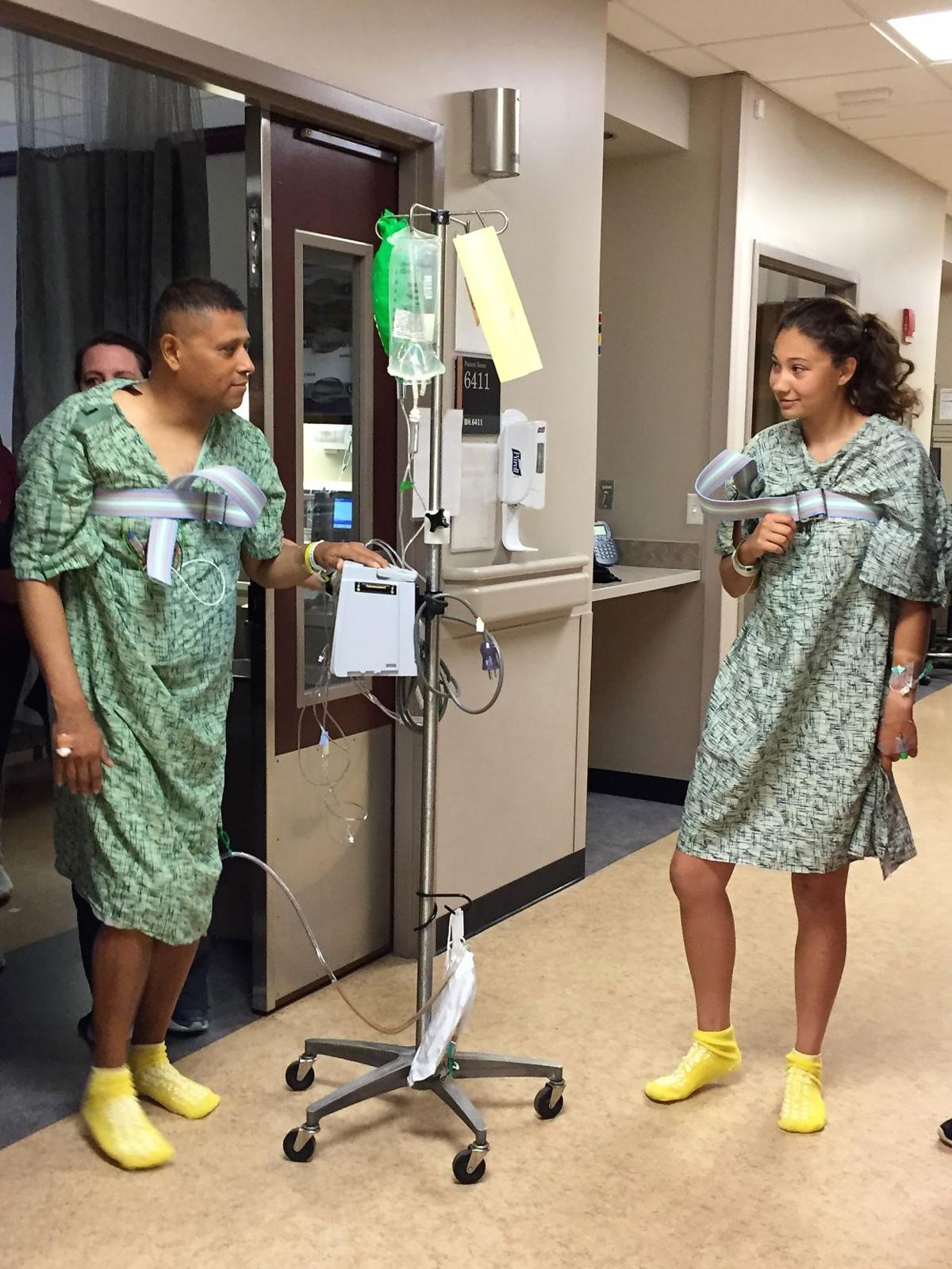 Richard Gutierrez (left) and Jordan Carlson (right) meet in the hallway outside their rooms after their kidney transplant operation in late June. 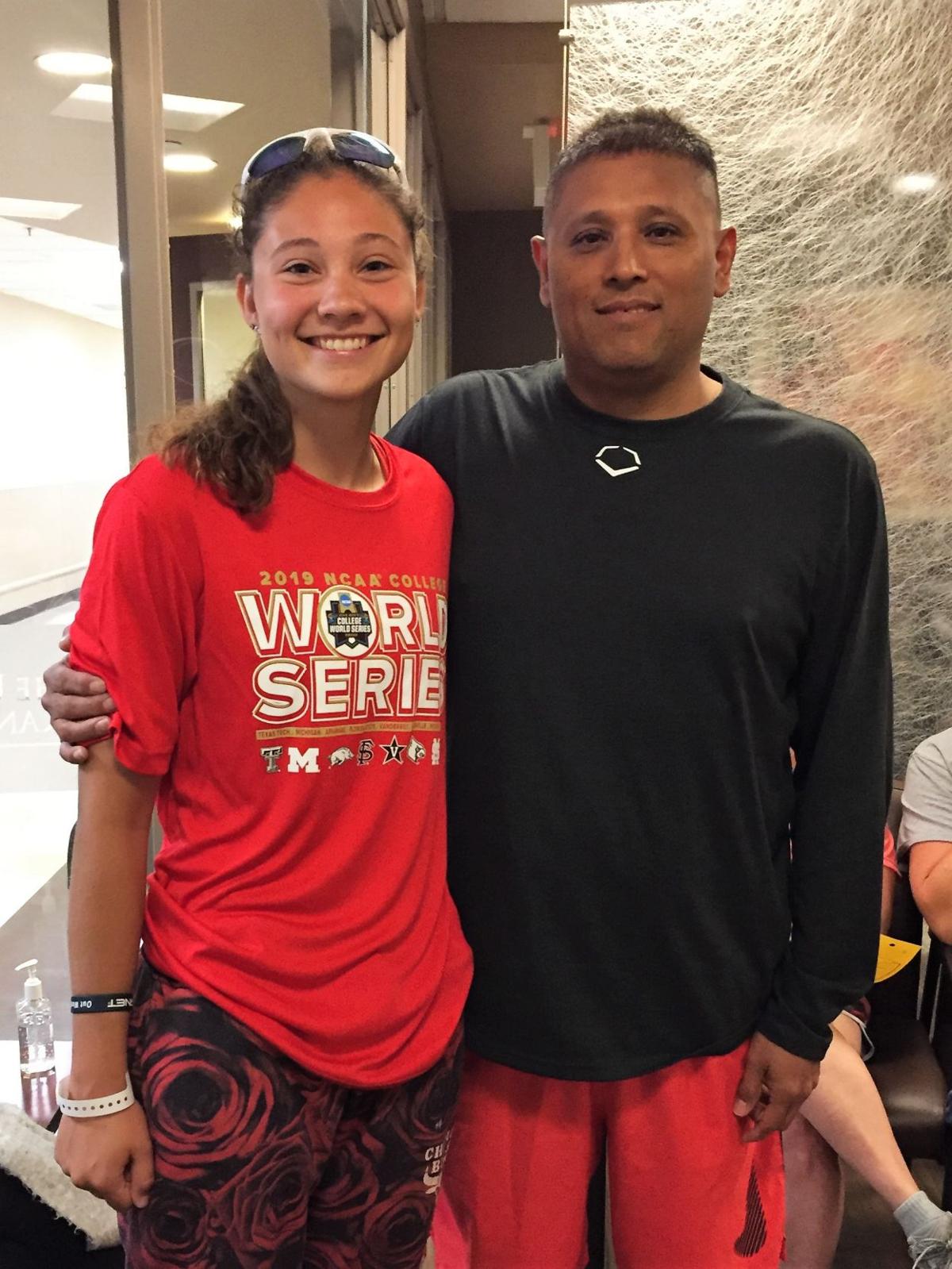 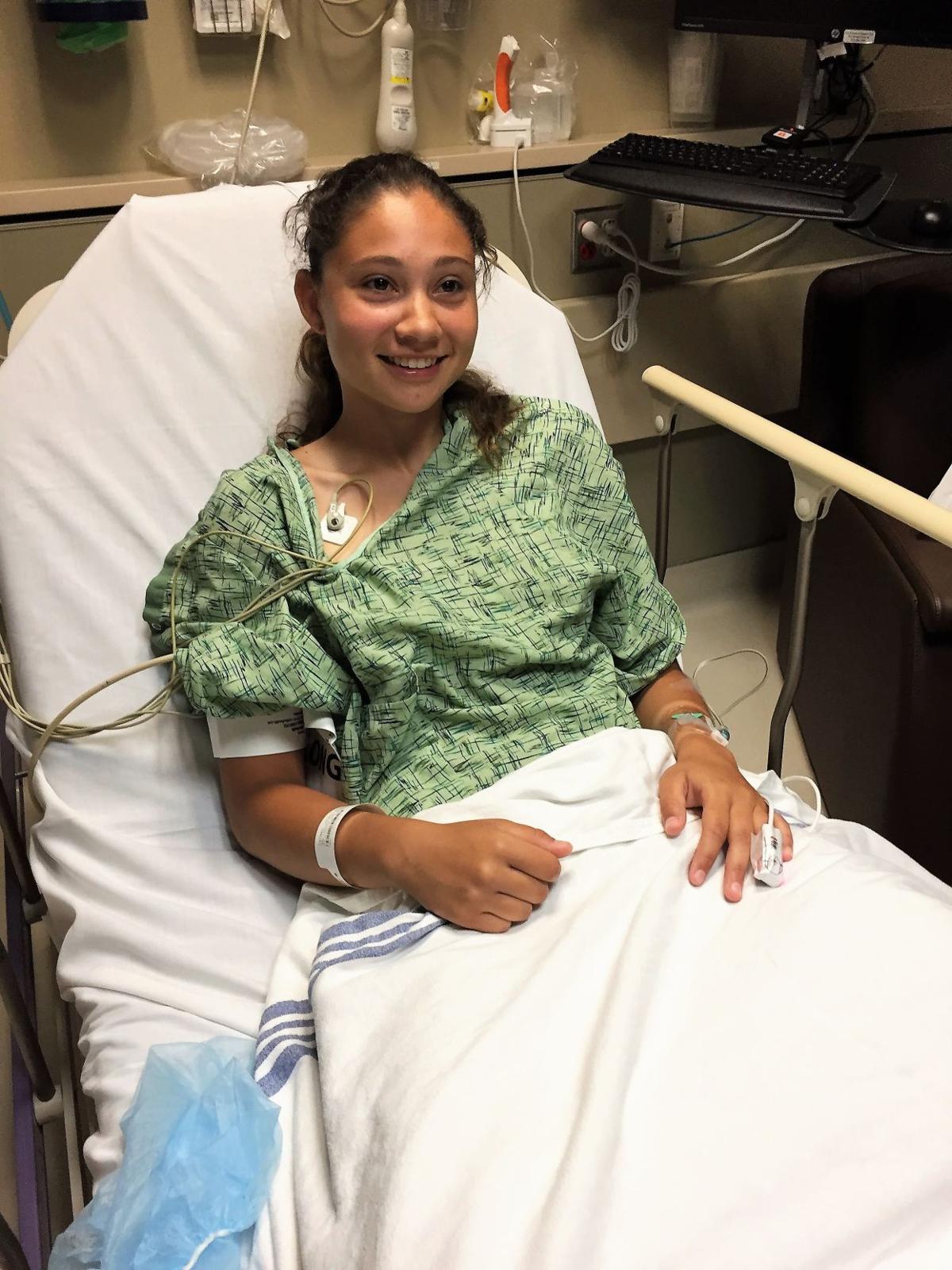 Carlson remained upbeat and optimistic as she awaited the operation that would move a kidney from her body into the father of one of her softball teammates. 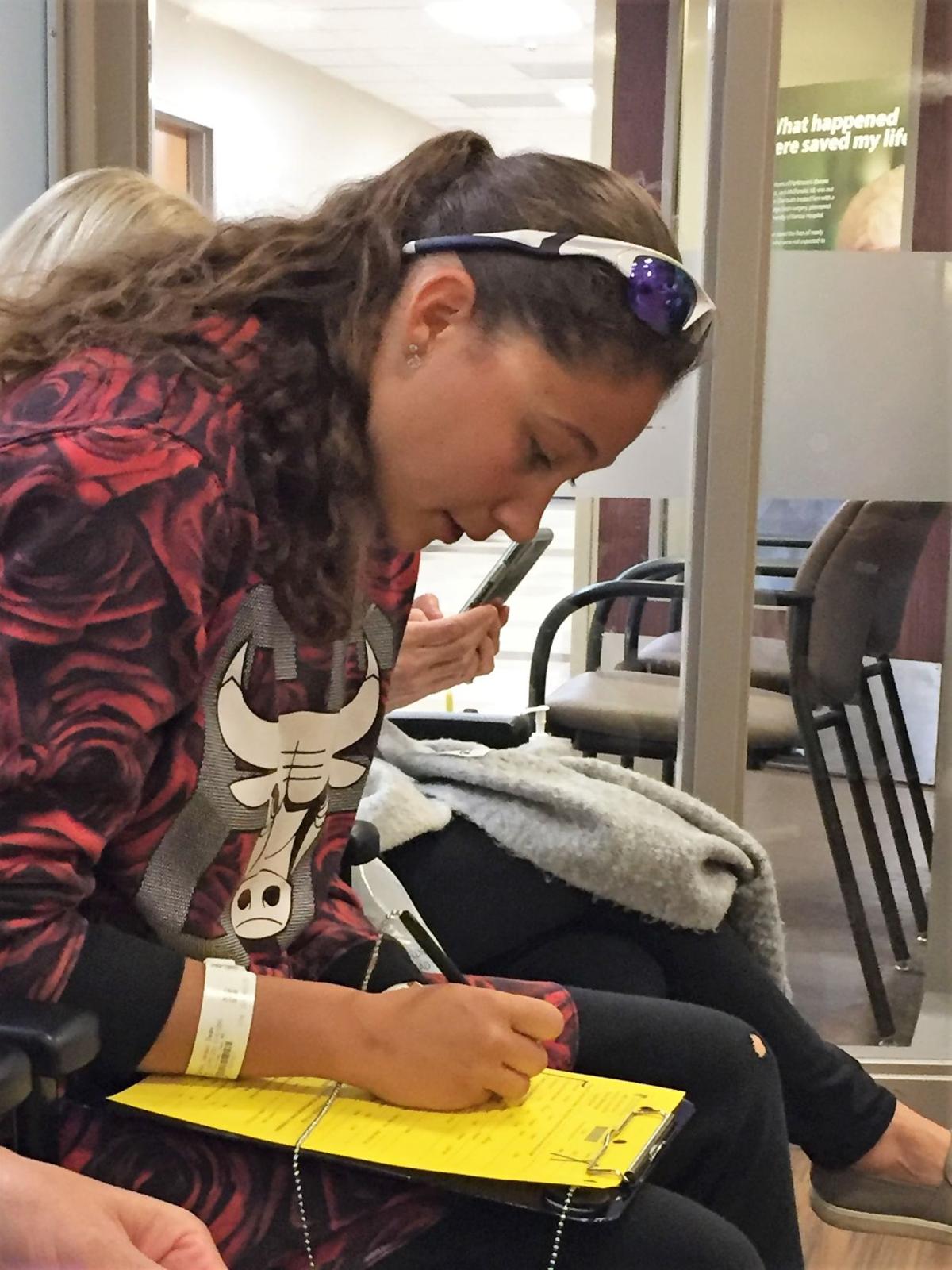 Richard Gutierrez (left) and Jordan Carlson (right) meet in the hallway outside their rooms after their kidney transplant operation in late June.

Carlson remained upbeat and optimistic as she awaited the operation that would move a kidney from her body into the father of one of her softball teammates.

When Jordan Carlson began her collegiate journey with a two-year stint of playing softball at Butler Community College, she couldn’t have known exactly what kind of impact she was going to make.

On the field, she batted .322 in two seasons, helping them repeat as NJCAA National Champions her freshman year and taking them back to the national tournament a second time last spring.

While on the road to that second visit to Utah, however, Carlson got a call that was far more powerful than any trophy or medallion could provide.

She got confirmation she would be able to help save a life.

Carlson — a native of Council Grove — had become friends with teammate Meghan Gutierrez after their first year of playing together. Initially, they were two quiet freshmen who solely served as hitting partners during practice. It wasn’t long, however, before the pair became nearly inseparable.

That proximity allowed Carlson to catch word of Meghan’s father and the health difficulties he had behind and in front of him. That put him on her heart. When she saw a Facebook post in December in which he had listed a phone number to seek compatibility for being a kidney donor, that put him on her mind as well.

It was all she needed to nudge her into making an effort to see what she could do.

“I (thought), ‘Why not? (I’ll) try it out, see if it works out,’” Carlson said. “(I) definitely wanted to help her out. It’s hard to see your dad go through something like that (ever) since he was very young. That’s when it (began), but it started to get worse and worse. I know that took a toll on her and I wanted to ease that a little bit.”

The initial call was a bit overwhelming to a degree, as Carlson ended up answering “60-plus questions” in that conversation, with inquiries relating to physical traits and well-being.

Then came blood tests in Wichita, which confirmed her verbal answers. Then a few trips to Kansas City for more tests.

“I passed all that,” she said. “The process started in January and I didn’t get accepted until May. It was a long, long process.”

That’s the call she received while en route to Utah. She was a genuine match as a donor.

Richard Gutierrez, who lives in Wichita, knew at a young age that his health would not hold up. He was made aware he had a hereditary disease known as Alport Syndrome, which is often defined by progressive kidney failure. The ailment made its presence felt throughout his life, claiming the lives of two of his brothers in their teenage years, as well as a pair of uncles.

“To watch them go through the suffering and all the pain, I’d always told (my family) that I never wanted to live like that,” Gutierrez said. “My uncle had been on a machine so long ... in his last days, they couldn’t get morphine into him because his veins crystalized. Just listening to the pain at night ... (and) to watch my two brothers pass, it was just something I didn’t want to go through.”

Gutierrez’s eldest brother survived, living on a dialysis machine for nearly 15 years before he was finally able to get a transplant, one that has resulted in a life-altering change.

That’s more than Richard could say of his first try.

He underwent his first transplant early in 2016. That one lasted less than two weeks, however, when clotting led to complications, among them being a second surgery to remove the replacement. His original kidney was still doing enough work that they allowed it to resume duties.

Due to the issues that came about, it was nearly a three-month wait before his name was reapplied to the waiting list.

“When I got out of the hospital, function was about 17 (percent), so I was starting to deteriorate,” he said. “It was probably ... February, my function started to fluctuate around 11 percent, 10 percent. When you hit eight, that’s when they start getting you ready for dialysis. I kind of knew (a transplant) was coming pretty quick.”

He had several options at that stage, but the previous malfunction had potentially removed most. A cadaver transplant was no longer a viable option.

“They said since I had clotted the first time that a living donor was probably my best route,” he said.

Even while seeking solutions, Gutierrez followed the Grizzlies wherever they played, including St. George, Utah, just north of the Arizona border, for the NJCAA National Tournament.

That’s where Carlson broke the news to him, that she had checked out as a potential donor.

Gutierrez kept the door open for Carlson to vacate her decision with no ill will.

She had none of it.

“We talked and texted all the time about it,” Carlson said. “He always told me any time that I wanted to back out, I could. He was never going to hold that against me. I always told him there ain’t no backing out. This is happening. He was definitely with me every step of the way of the process. It was really nice to be able to talk to him and not have to go through it alone.”

The lines of communication were open and frequently used as June moved along, especially after the date was bumped up almost two weeks. By the time Carlson got home from Utah, there was only about three weeks of time until the operation was set to take place.

“It seemed like that 25 days were the longest days of my entire life,” she said. “I was just ready for it to happen.”

Gutierrez was certainly ready as well, but still held reservations in the back of his mind, but not of his own outcome.

“I’ve been through it one time before, (it was) not so good, but I knew what was going to take place,” he said. “I was more worried about Jordan than I was for myself. I’d been through injection, I could go through it again. Her safety, really, that’s what was in the back of my mind. I know how energetic she was. She goes 100 miles per hour at whatever she does.

“I wanted her to still be (the) same as she went in when she came out.”

Gutierrez said as soon as he awoke after the surgery, he could feel a dramatic improvement in his pain levels. His creatinine level entering the operation was over 5 (a typical reading for a working kidney would be around a 1). The first measurement he recalled after the surgery saw it drop to almost 2. Now, the readings are hovering around 1.2 to 1.3, just minimally above the norm.

“I could feel the difference,” he said. “It had dropped that much, (that much) poison had come out of my body.”

One door down, Carlson also awoke to find out things had gone according to plan.

“He, right away, was doing well,” she said. “So that definitely lifted my spirits.”

The next day, Carlson did her best to resume her typical pace, getting some assistance to walk a lap around the hospital corridor. Gutierrez came out soon after and the two attempted a second lap together. Both parties were exhausted, but also seemingly driven by the other’s spirit.

Carlson was still in pursuit of her next softball program, from a four-year school, as she began the rehabilitation and healing process. That was in July. This week, she departed for Francis Marion in South Carolina, where she intends to finish up her playing career.

Perhaps the attending physician and their staff should skip over the next sentence.

“The weekend I came back from the hospital, I was carrying 30 pounds of stuff when I’m not supposed to,” Carlson said. “I was never really (under the concept) of, ‘I’m not going to be able to play softball anymore.’ I was like, ‘Oh, I’m going to be ready in three weeks.’

“I think it’ll all work out. I already feel almost completely back to where I was before.”

Gutierrez also is picking up steam quickly, hoping to resume his role as a production supervisor at Tramco, Inc., in Wichita by September.

“Whenever the doctors say I can go back, that’s when I’ll go back,” he said.

“It was unreal,” he said. “What she did for my family, to give me my normal life back again, give me a chance to spend more time with my children, I’ll never be able to repay her. (The Carlsons are) now, an extended part of my family. I will truly and always be (indebted) to them. They raised such a great family, especially one special daughter.”

As for Carlson, she is ready to make the same decision again, regardless of the cost.

“I still would do it, if you asked me today,” Carlson said. “I told (Meghan), ‘If you need a kidney tomorrow, I got you, even though I won’t have one.’ I definitely would do it a million times over. God willed you to do something, why mess with that?

“I would just encourage people, if you have the opportunity to donate, go try. You don’t know how much you can affect a family’s life by just giving up a little something of yourself.”

"You don't know how much you can affect a family's life by just giving up a little something of yourself."