Sign Up
Log In
Purchase a Subscription
You are the owner of this article.
Edit Article Add New Article
You have permission to edit this article.
Edit
Home
News
Sports
Obituaries
Opinion
Area News
Print Edition
Magazines
Covid19
Classifieds
Subscribe
1 of 10 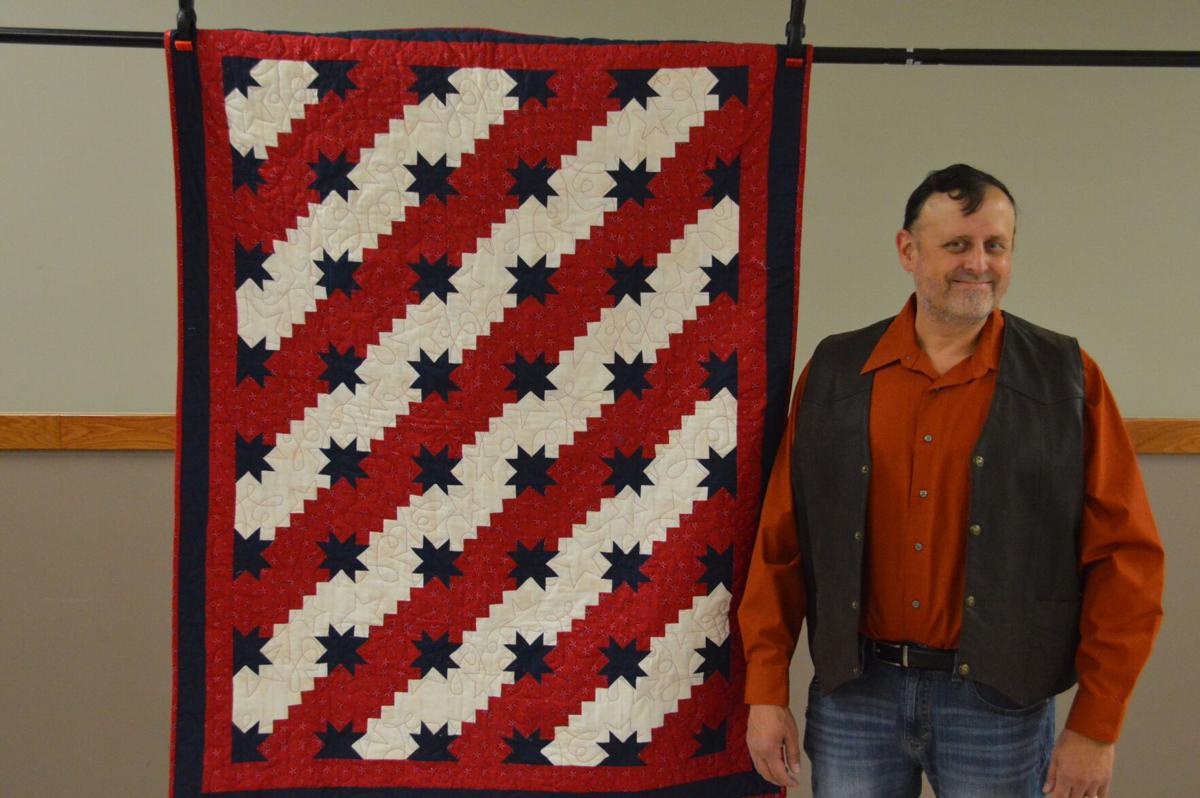 Robert Davis poses with the quilt he received on Sunday. 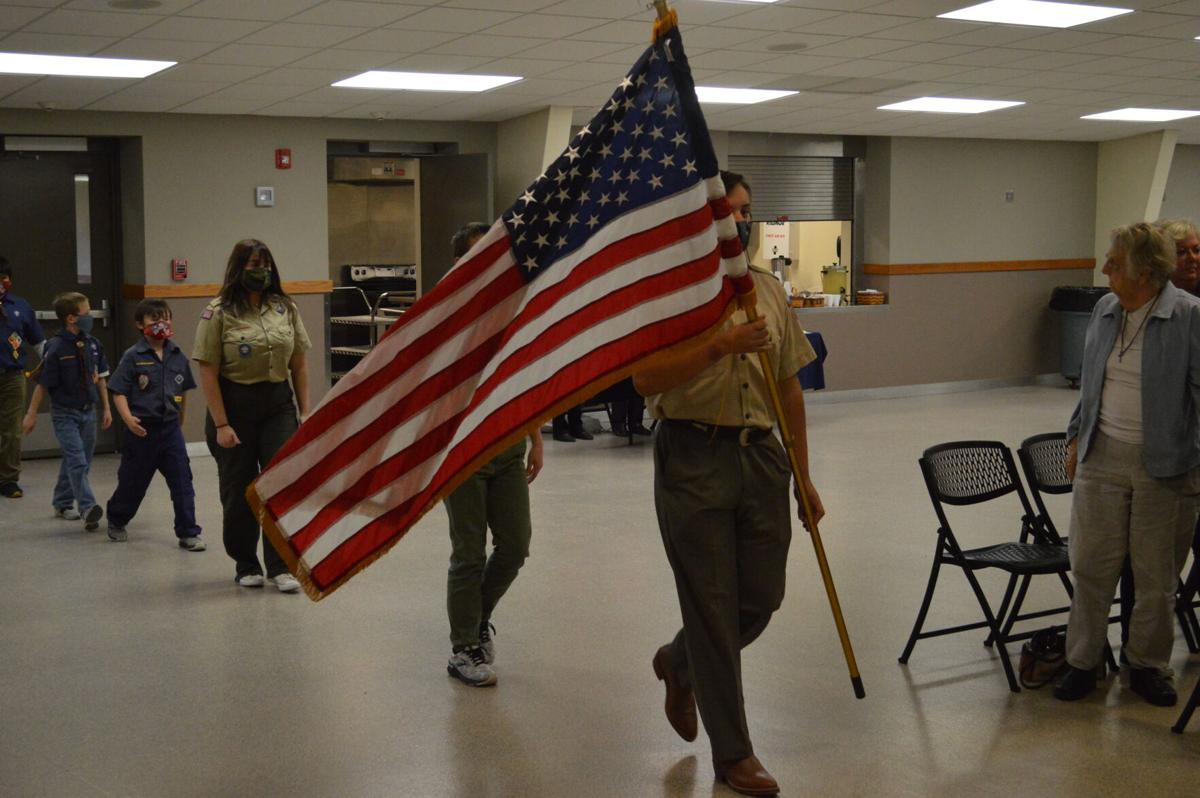 Scouts present the U.S. flag at the Quilts of Gratitude presentation on Sunday. 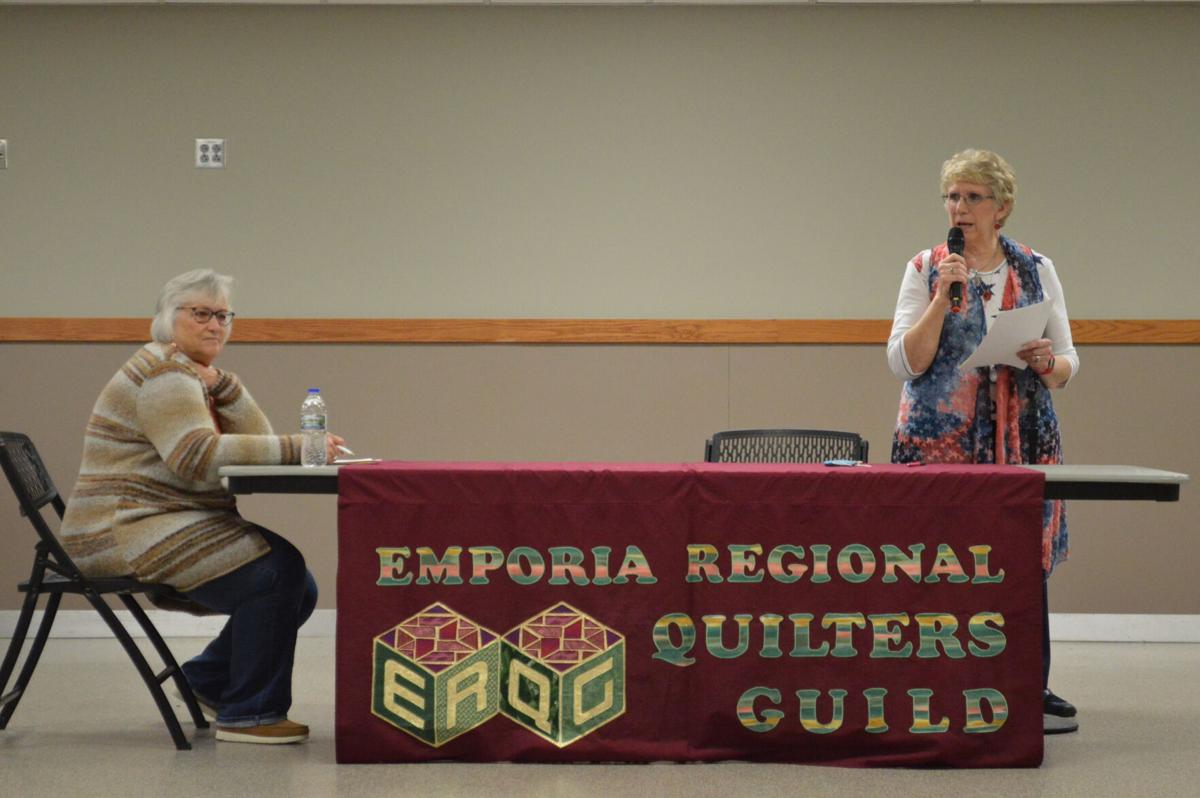 Quilts of Gratitude chairperson Kathy Hamman (right) explains the event to the audience in attendance. 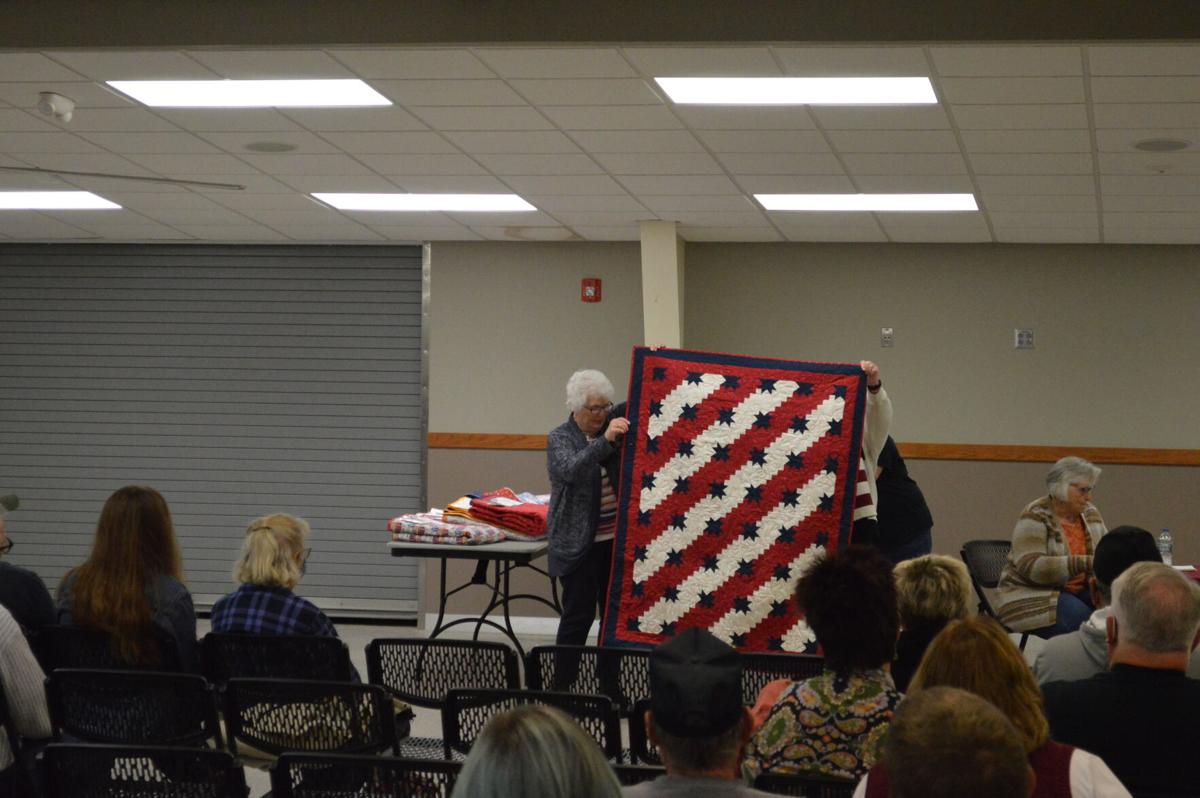 Thirty-four quilts were given out to local veterans in 2021. 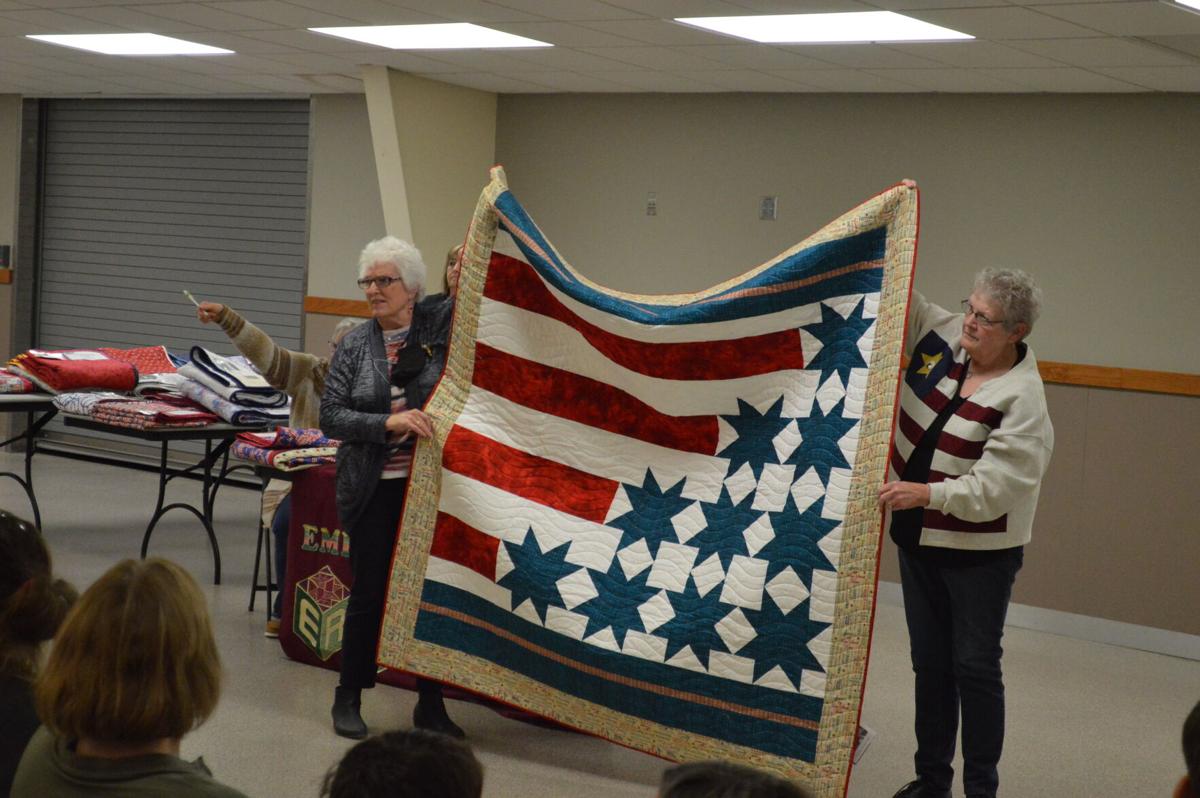 Local quilters show off one of the quilts made for local veterans. 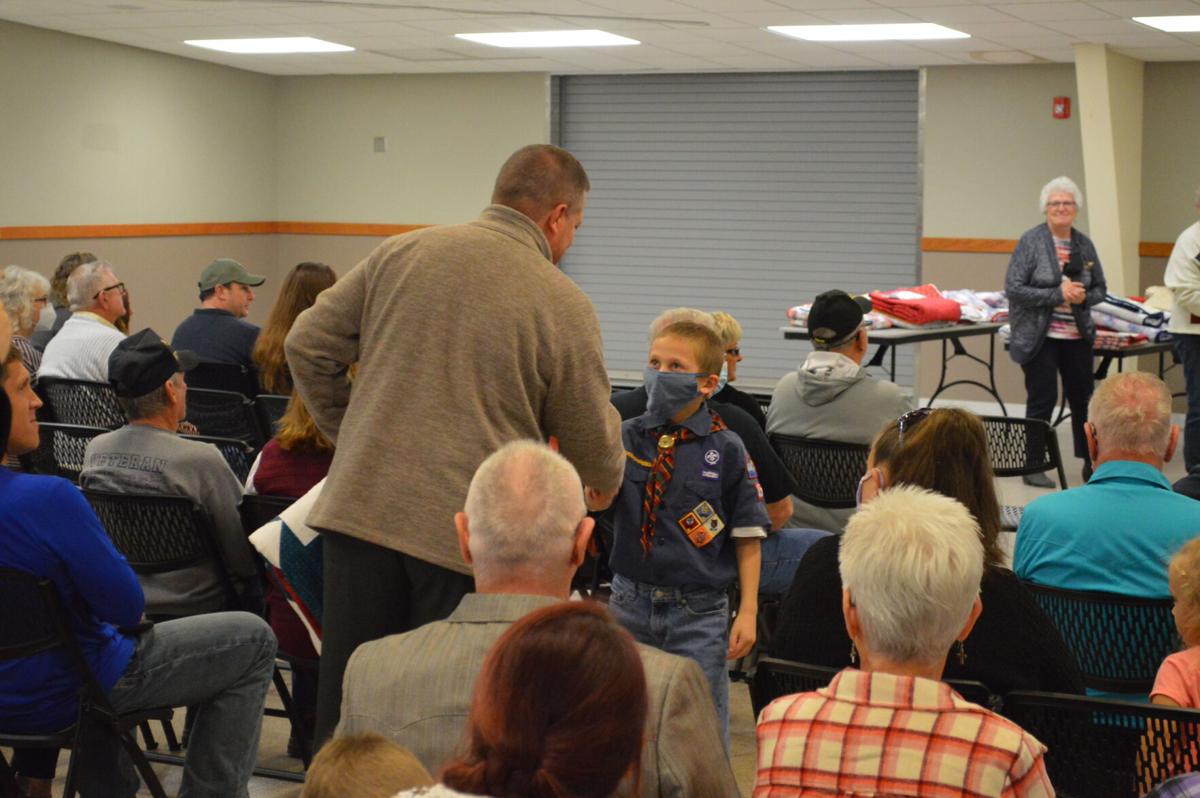 A veteran receives a quilt and a firm handshake from a local scout. 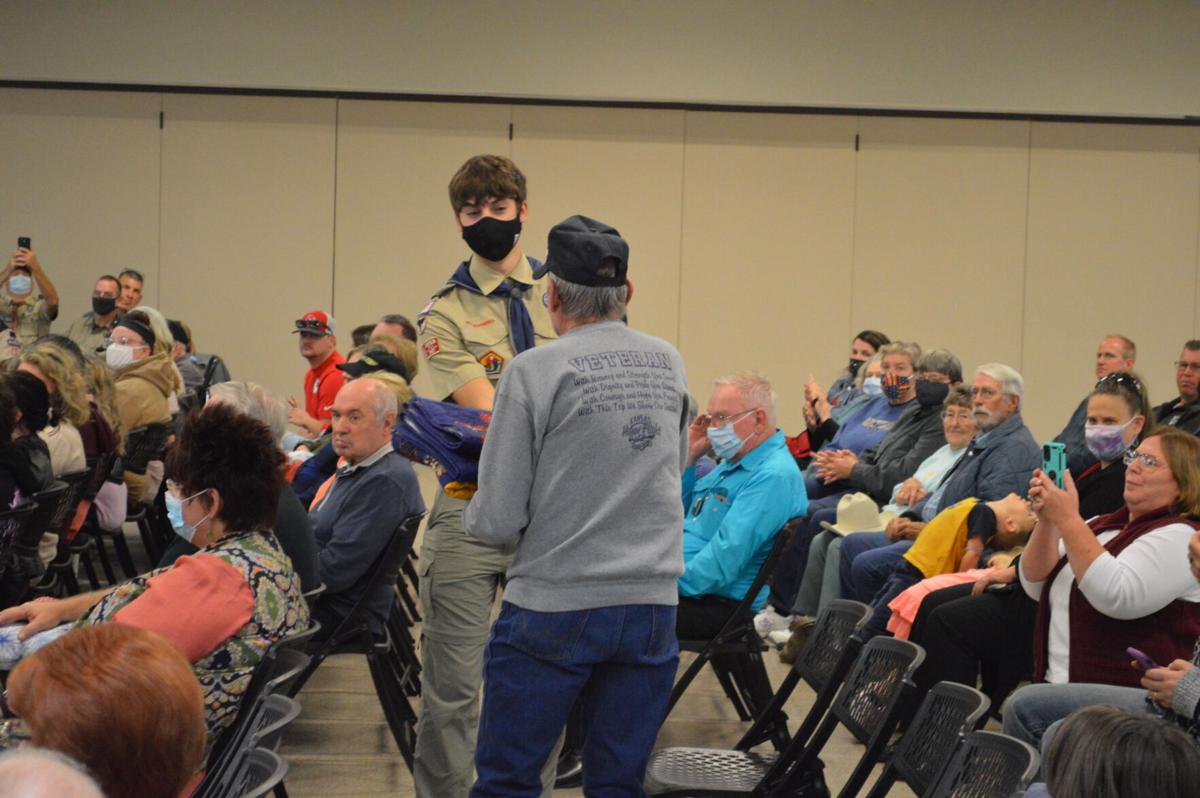 A veteran receives a “thank you” from a scout. 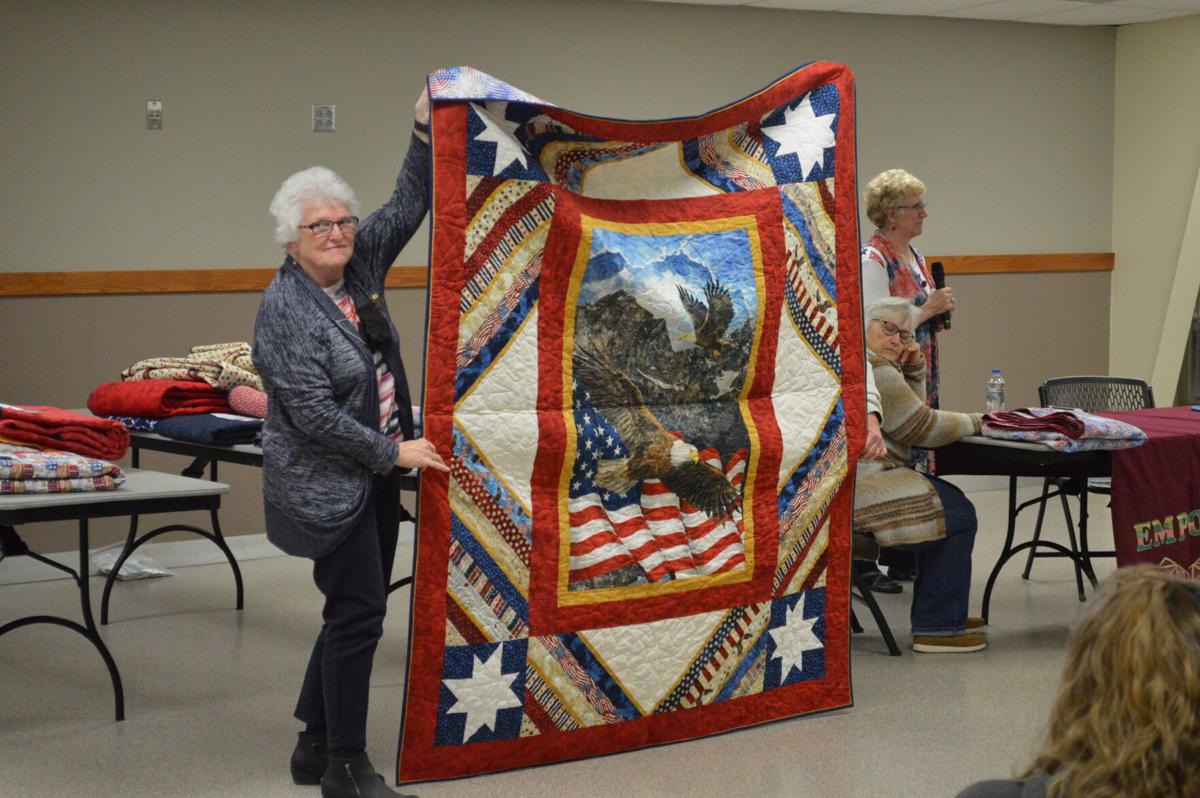 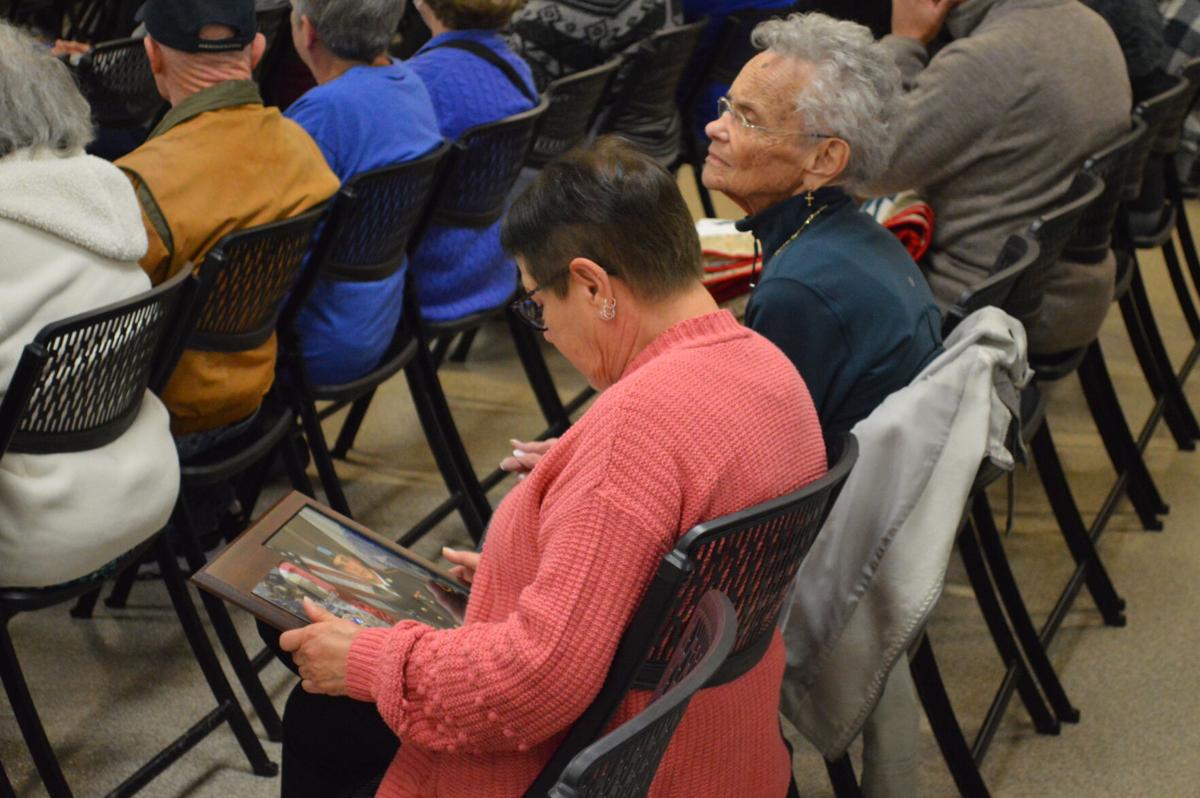 Susan Howard accepted a quilt on behalf of her son Matt Howard, who was unable to be in attendance. 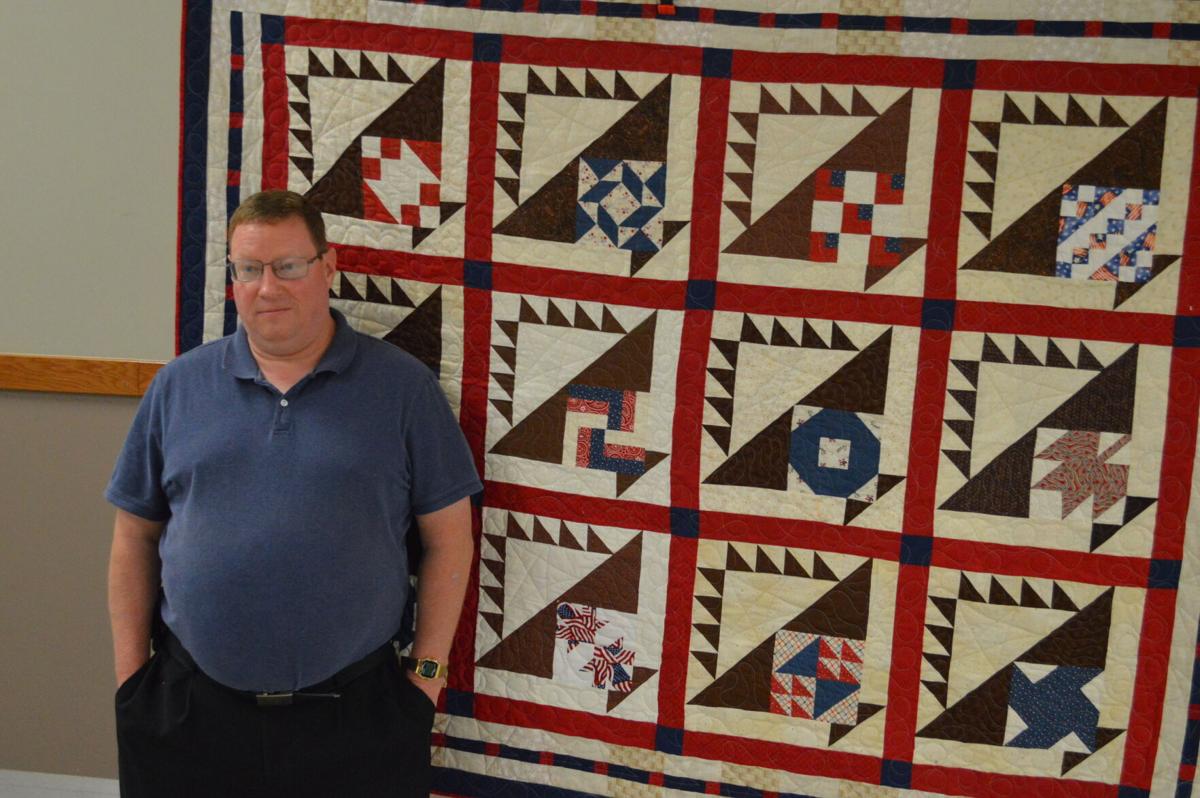 Robert Davis poses with the quilt he received on Sunday.

Scouts present the U.S. flag at the Quilts of Gratitude presentation on Sunday.

Quilts of Gratitude chairperson Kathy Hamman (right) explains the event to the audience in attendance.

Thirty-four quilts were given out to local veterans in 2021.

Local quilters show off one of the quilts made for local veterans.

A veteran receives a quilt and a firm handshake from a local scout.

A veteran receives a “thank you” from a scout.

Susan Howard accepted a quilt on behalf of her son Matt Howard, who was unable to be in attendance.

Quilters from around the area honored local Veterans Sunday afternoon with the Quilts of Gratitude presentation at the Anderson Building on the Lyon County Fairgrounds.

Thirty-four veterans received a handmade quilt stitched together by a local quilter as a gift of appreciation for their service in the military.

The nationwide movement began in 2003 and in Emporia it was picked up in 2010. To date, Emporia quilters have given out 462 quilts to veterans.

“Our goal then, being the founding fathers of Veterans Day, we wanted to honor veterans as well,” said Kathy Hamman, chairperson for the Quilts of Gratitude with the Emporia Regional Quilters Guild.

Hamman said that in the early years, the focus was on providing quilts to World War II, Korean War and Vietnam War veterans.

“Now, we’re getting into the Iraqi Freedom and Desert Storm [veterans],” she said.

For Hamman, providing a small token of recognition for veterans is personal. Her father served as a medic at Iwo Jima in World War II, her brother served in Vietnam, four of her uncles served in four different branches of the military, her father-in-law was a prisoner of war in Germany during the Second World War and her son is a marine who has been deployed overseas.

“That just kind of attaches to the heartstrings,” she said. “I have deep connections to veterans and I’m just so proud, proud of all the veterans. … Your heart just goes out to them.”

And while everyone involved in making the quilts enjoys quilting as a hobby, it takes on a different tenor for them in this case.

“When you’re stitching it for a veteran, it has a special meaning, especially if we know who’s going to receive it,” Hamman said. “You just think, ‘What have they been through? What have they seen? What do we not know?’ And so it makes it so much more special.”

Robert Davis spent six years as a combat medic in the U.S. Army and was deployed during the Gulf War in 1991. He said he was unaware of the Quilts of Gratitude and was surprised when he was selected to receive a quilt.

“Someone my wife knows found out that I was a veteran and asked if I’d ever heard of this and I said, ‘No,’” he said. “She’s like, ‘I want to make him a quilt.’ This is all new. It’s pretty exciting.”

While he was grateful for the recognition, Davis said that his decision to join was based on a sense of duty and a willingness to self-sacrifice.

“All of us who joined — I’ve heard this said multiple times — we wrote a blank check to our government, to our country, our neighbors,” he said. “Some people cash that check. Some of us, fortunately, didn’t have to.”

Susan Howard accepted a quilt on behalf of her son, Matt Howard, who was unable to be in attendance. He joined the U.S. Army in 2014 as a sophomore at Emporia State University and Susan Howard said that “he loves it.”

For her, though, being the mother of a child in the military comes with mixed emotions.

“You go through pride first and foremost, but a lot of times there’s fear of the unknown,” she said. “Being an army mom is tough because I didn’t sign up for this, because there’s long periods of absence, long periods of times that you don’t see them. But you just kind of, as they say, ‘Embrace the suck,’ and you push through. I live under the philosophy of ‘No news is good news.’”

Susan Howard said that being able to receive a quilt for her son made her feel “overwhelmed.”

“I’m extremely proud of the man my son has become,” she said. “He’s become strong and independent, resilient. He’s just become a tremendous human being. … He’s part of something much, much greater than him. And he sees it more as a lifestyle. It’s not a job. It’s a lifestyle. … He’s just kind of my hero.”

It was a wonderful way to make our Veterans feel wrapped in love and appreciation. Thank you for honoring my husband... It meant a lot .

As one of these quilters, I can say what an extreme honor it has been to be a part of this event all these years. Tears flow and pride is definitely in the air. Congrats to all recipients, most of whom were completely surprised to be honored this way. Lots more to come. My quilt for next year is already under my needle.

Thanks for being such a wonderful person, create!