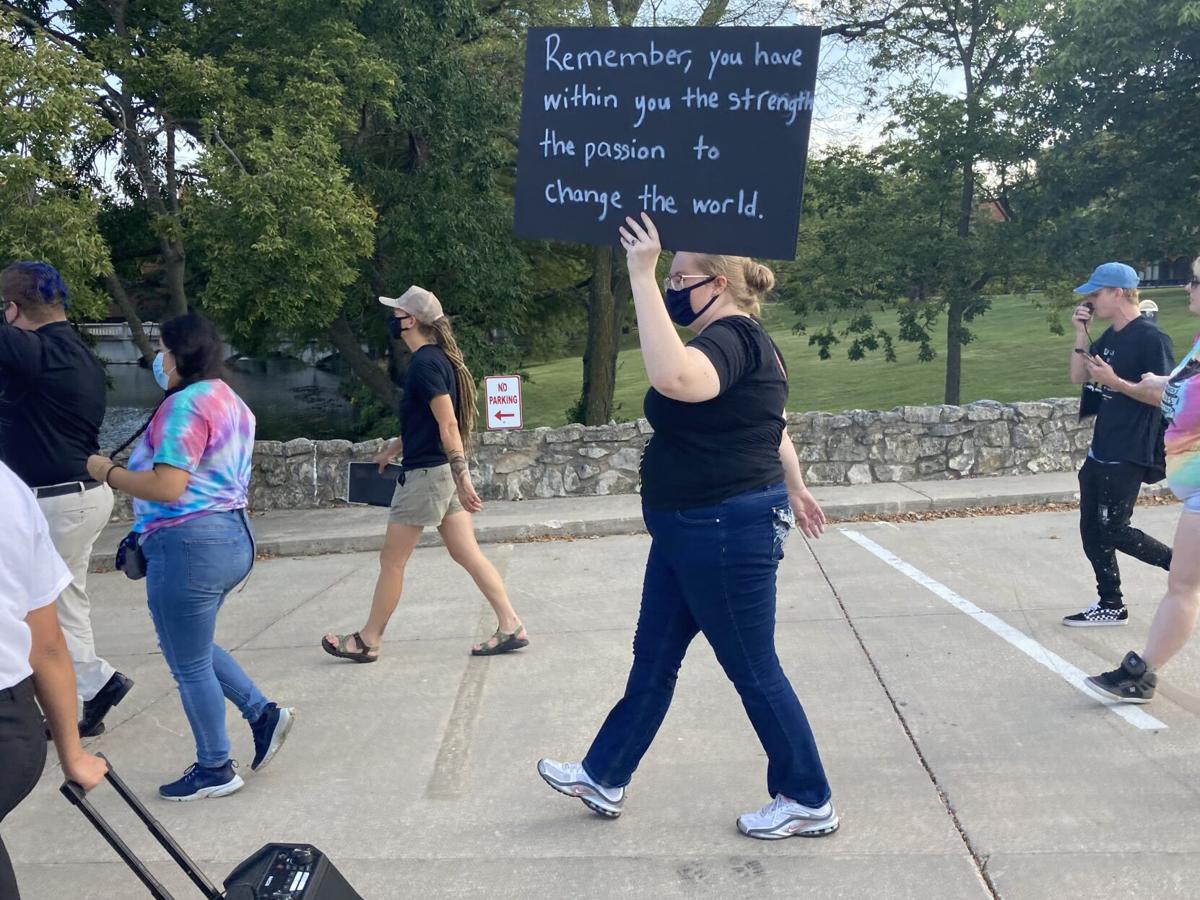 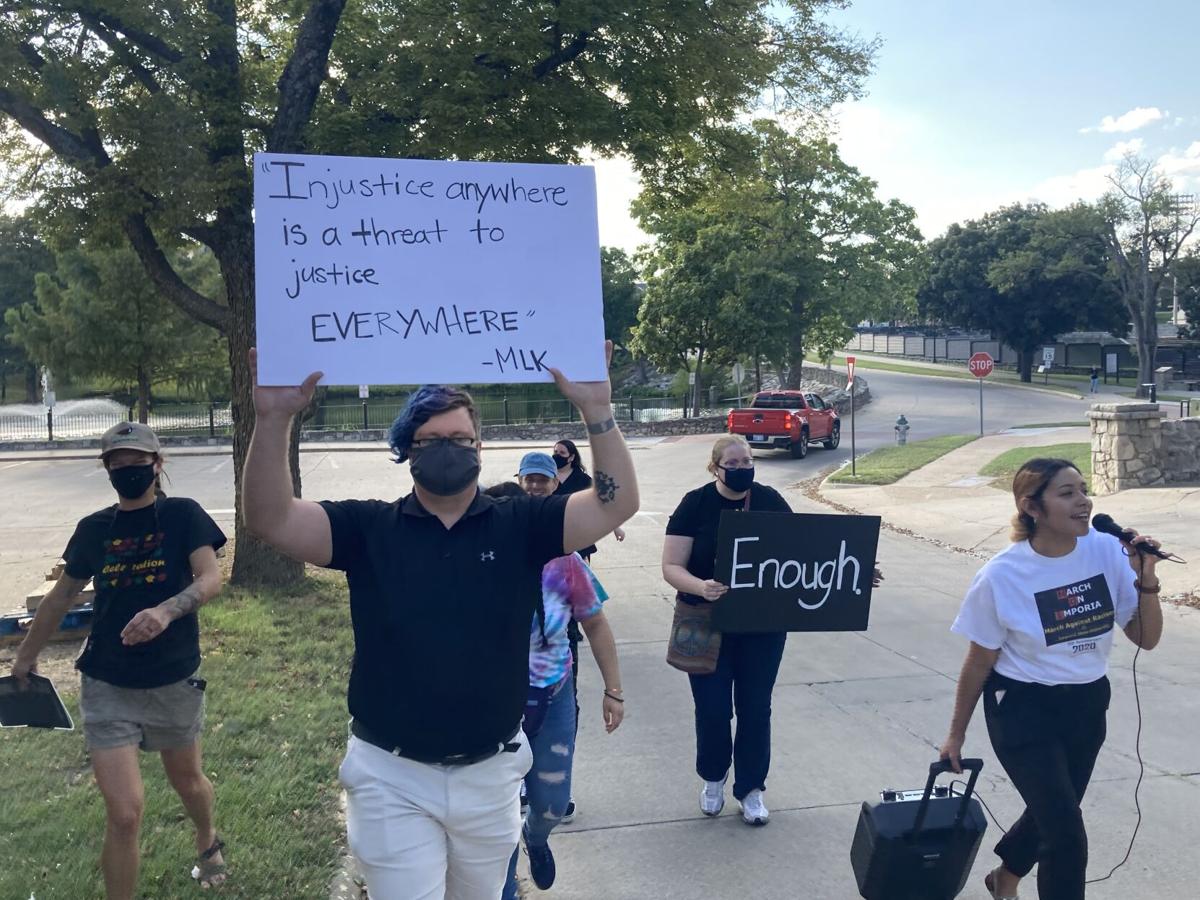 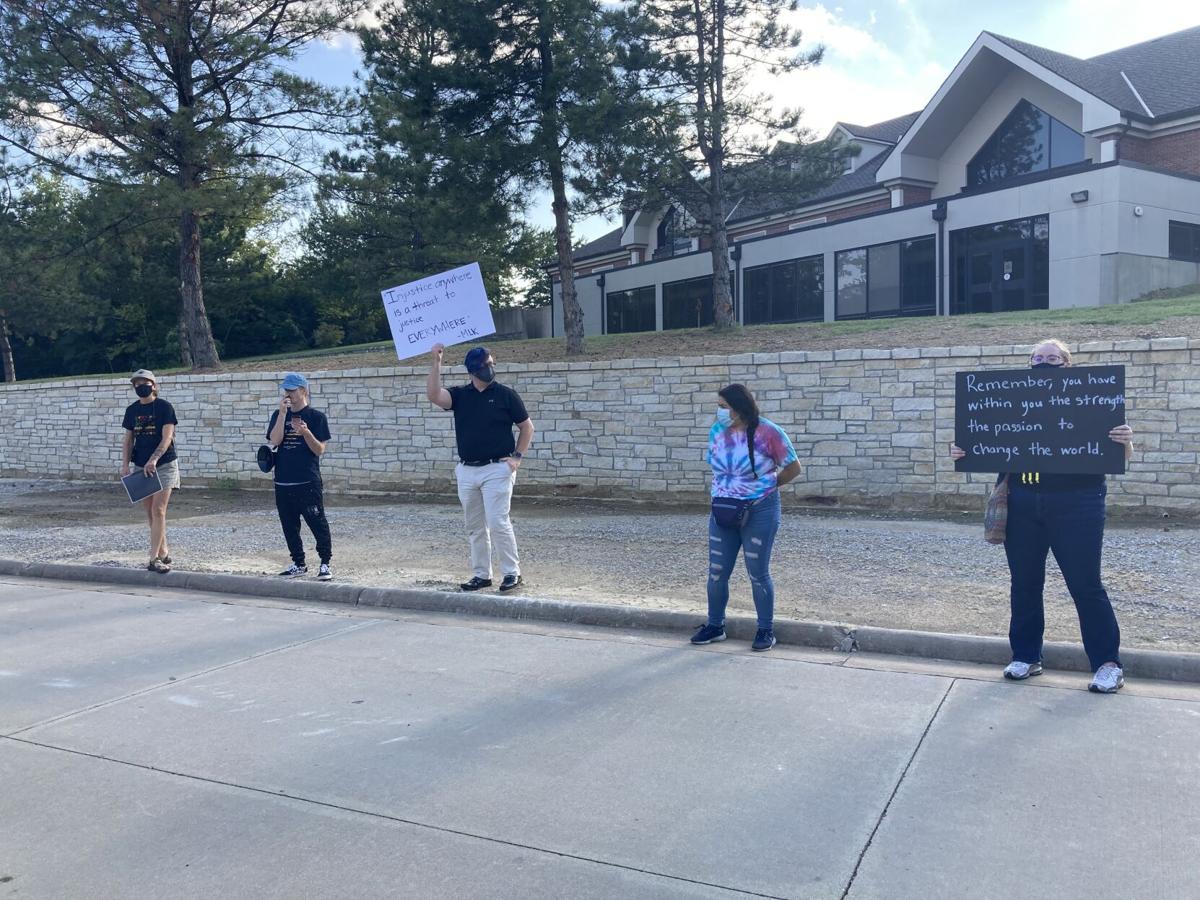 Protesters outside of ESU President Allison Garett’s home on Wednesday for March on Emporia. 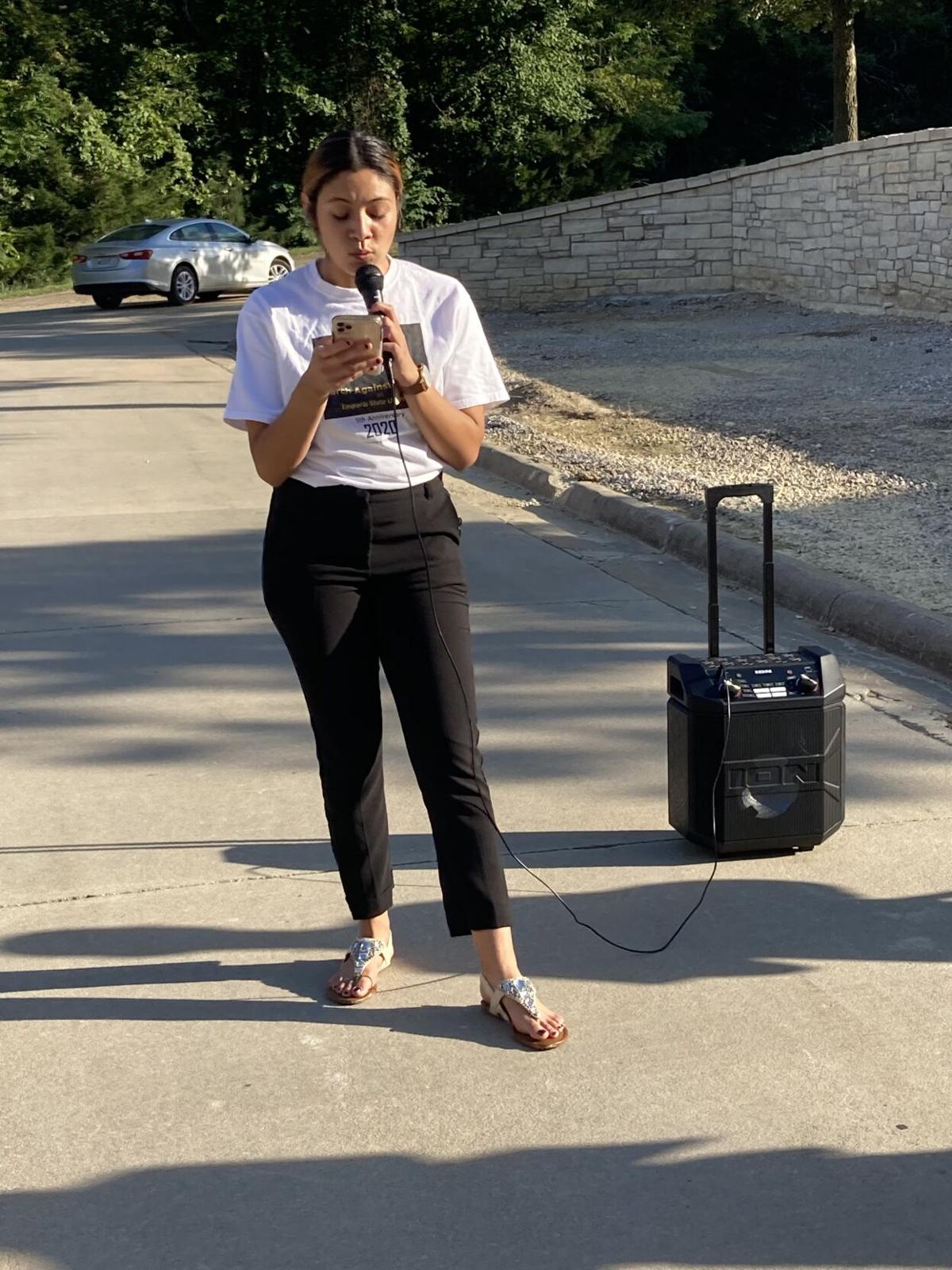 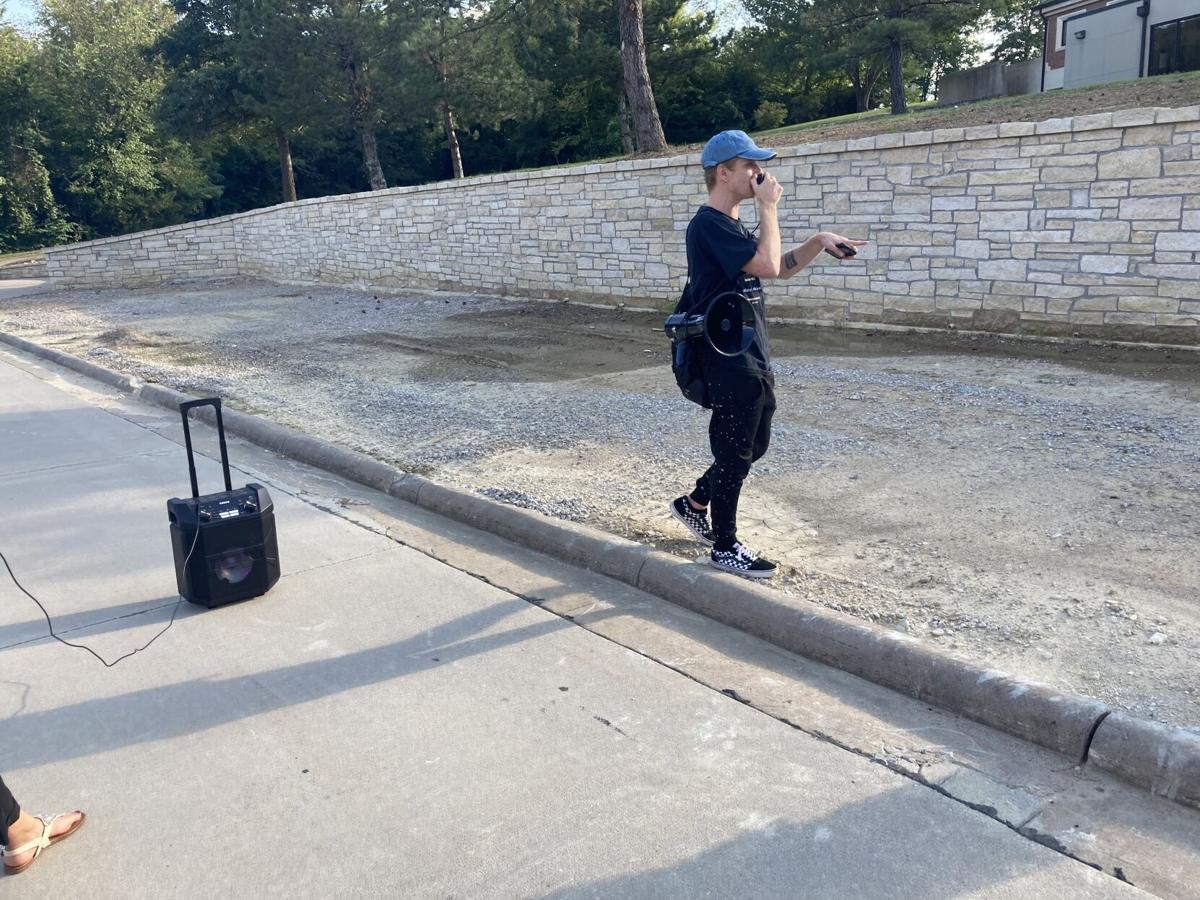 Protesters outside of ESU President Allison Garett’s home on Wednesday for March on Emporia.

Activists chanted that brown and Black lives, as well as LGBTQIA students and teachers, mattered at Emporia State University Wednesday evening for the annual March on Emporia.

The march is a collaboration of the Justice Initiative Youth Council and Emporia Community Action in honor of Angelica and Melvin Hale, who filed lawsuits against ESU in 2016, after Angelica Hale found a notebook with a racial slur written on it in the fall of 2015.

Angelica and Melvin Hale both worked in the School of Library and Information Sciences, him as an associate professor and her as a temporary employee. The Hales brought the incident to the university, stating a hate crime had occurred, and alleged that they were not rehired at the university as a result. A federal judge ruled in favor of Angelica Hale in 2020 in a Title VII lawsuit, awarding her $64,303 in back pay.

Melvin Hale, Ph.D, and graduate of the University of California, case was dismissed after a jury decision found in favor of ESU through the US District Court. Angelica Hale is seeking an additional $500,000 through the 10th Circuit Court of Appeals of Denver, with a final decision expected to be reached before the end of the year.

The march addressed systemic racism and the rights of minorities, LGBTQIA and women. As they marched, the group encountered many students who didn’t know who the Hales were, despite six years of protest. The march was led by JIYC organizer Jay Vehige and ECA organizer Emily Velazquez.

“The message is that other faculty of color that want to come here is that they are not welcome, and that if something happens to them that they are not going to be protected,” Vehige said. “The same could be said for students coming here as well. This institution wouldn’t be here without the money that is brought in by students every year. Students deserve to know what happened here.

“This university has really worked hard in the past six years to cover up history and sadly, when you don’t know history you’re doomed to repeat it. To say that racism is being addressed here when students and faculty are still discussing being oppressed, and nothing is done, it just breeds wanton disregard for human rights.”

Vehige, who has known the Hales since 2014, said the university is not doing enough to address diversity and recognize what happened to the Hales.

“When students look online and see ESU promoting on Instagram and Facebook faces of color they are saying, ‘Hey, come here, it’s safe,’ but when they come here and find out the dirty dark deeds and truth, about what happened to the Hales ... that came here and uprooted his entire life to provide his expertise and knowledge of the SLIM department, be retaliated and pushed on, and his wife and him to lose everything, his job, his home and end up sleeping in car, you see what white supremacy looks like in real time and to not say anything or do anything would be to lie to the students.”

The group called on ESU president Allison Garrett outside her home, who did not attend the protest, to “do the right thing.”

Melvin Hale, who joined the protest via phone, spoke outside of Garrett’s home.

“Thank you to those who work to make sure this sordid anniversary isn’t overlooked. Regardless how small at ground zero you are for this sixth anniversary, specifically at ESU, it extends to everywhere and everyone who stands against racial hatred,” he said. “By looking at what was allowed to take root and grow in Kansas, as it relates to the case against ESU, who lost, I might remind everyone, in federal court, it might become apparent with what is wrong with America right now.”

Hale alleged that the university said it was “just a hateful act,” not a hate crime. He urged white people to read the “Rising Tide of Color,” written in 1920 by Harvard graduate and Ku Klux Klan member Lothrop Stoddard, saying he was tired of “willful ignorance” and people consuming “big lies” from people in power.

The group marched back to Kellogg Circle and prayed for peace.

“We can come to together as a community to support the Hales and recognize they deserve the adequate compensation that was taken from them when ESU decided to discontinue their contract, and not address the racist act that was committed against them,” Velazquez said. “We can continue this at a greater level by speaking up when we see forms of discrimination, making sure that we address issues when it comes to race and institutional racism and when it comes to any form of discrimination, such as women’s reproductive system, voting rights, undocumented immigrants. It’s important for us to speak up for injustices and for things that are unjust and immoral laws. We need to speak up for what we believe in.”

Is that photograph some kind of giant reference to irony?