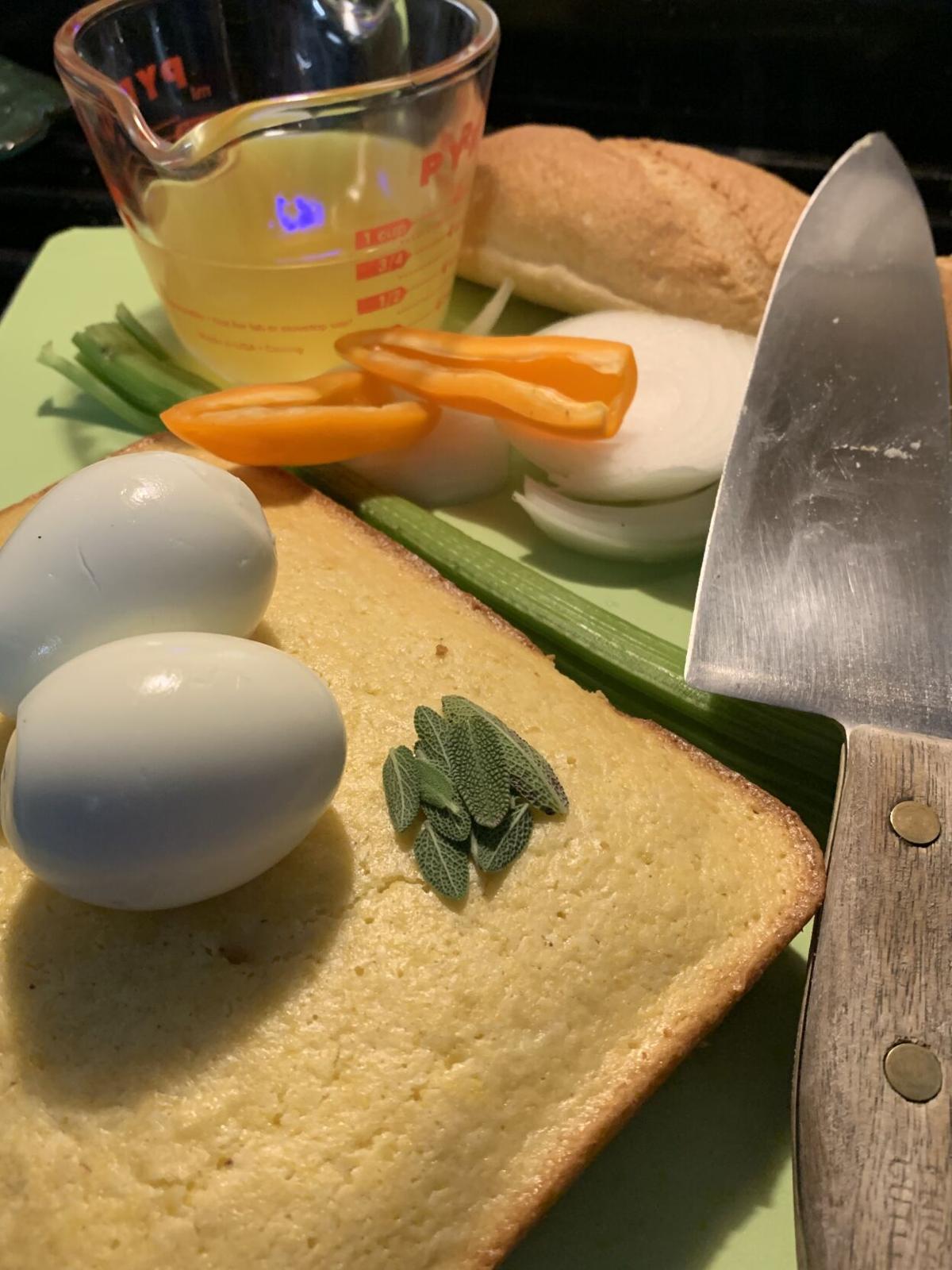 A few simple ingredients are all you need to make a pan of dressing. 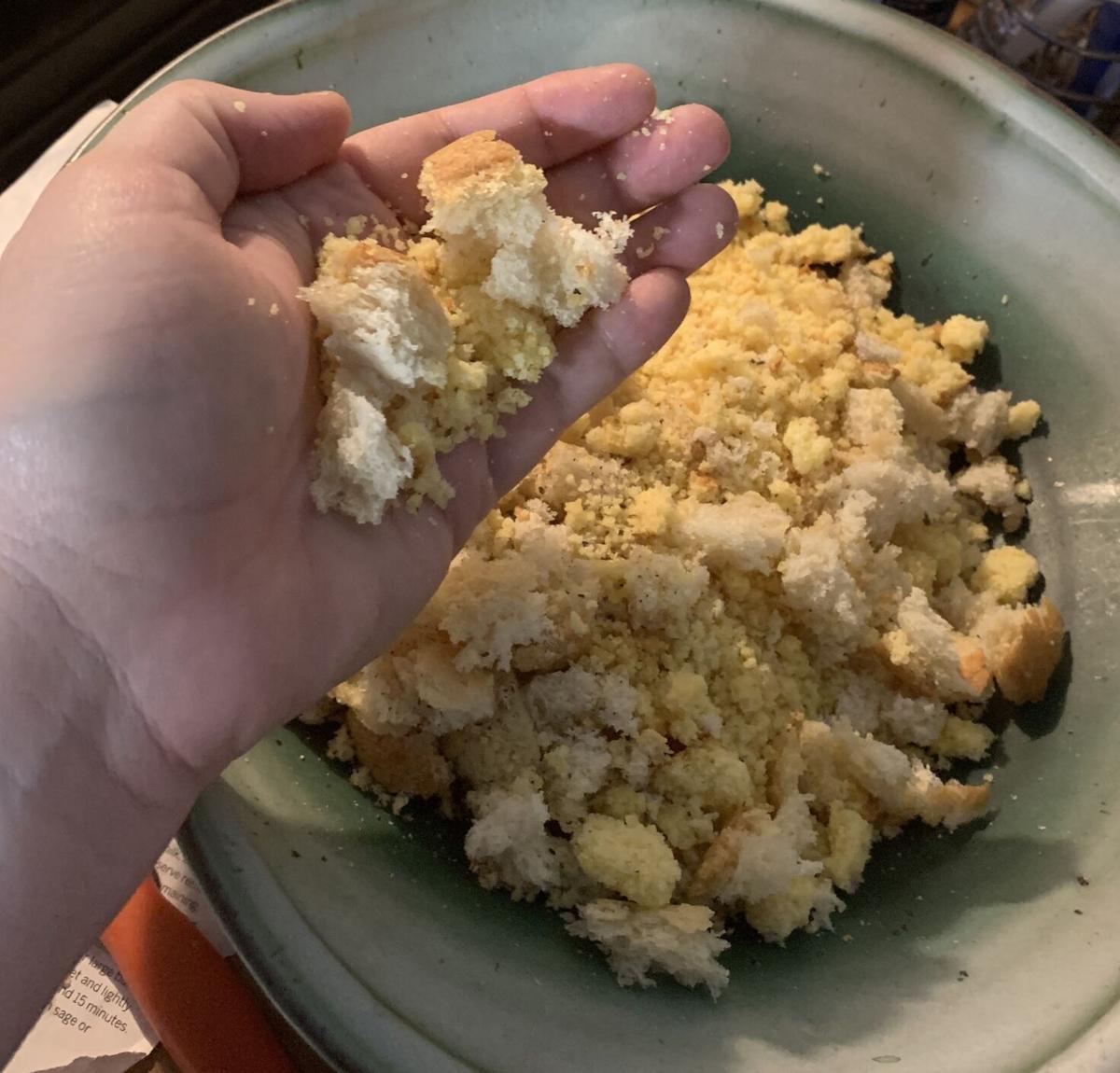 The French bread needs to be torn into small pieces so it blends better with the cornbread. This is a good task for the kids who want to help with the holiday meal. 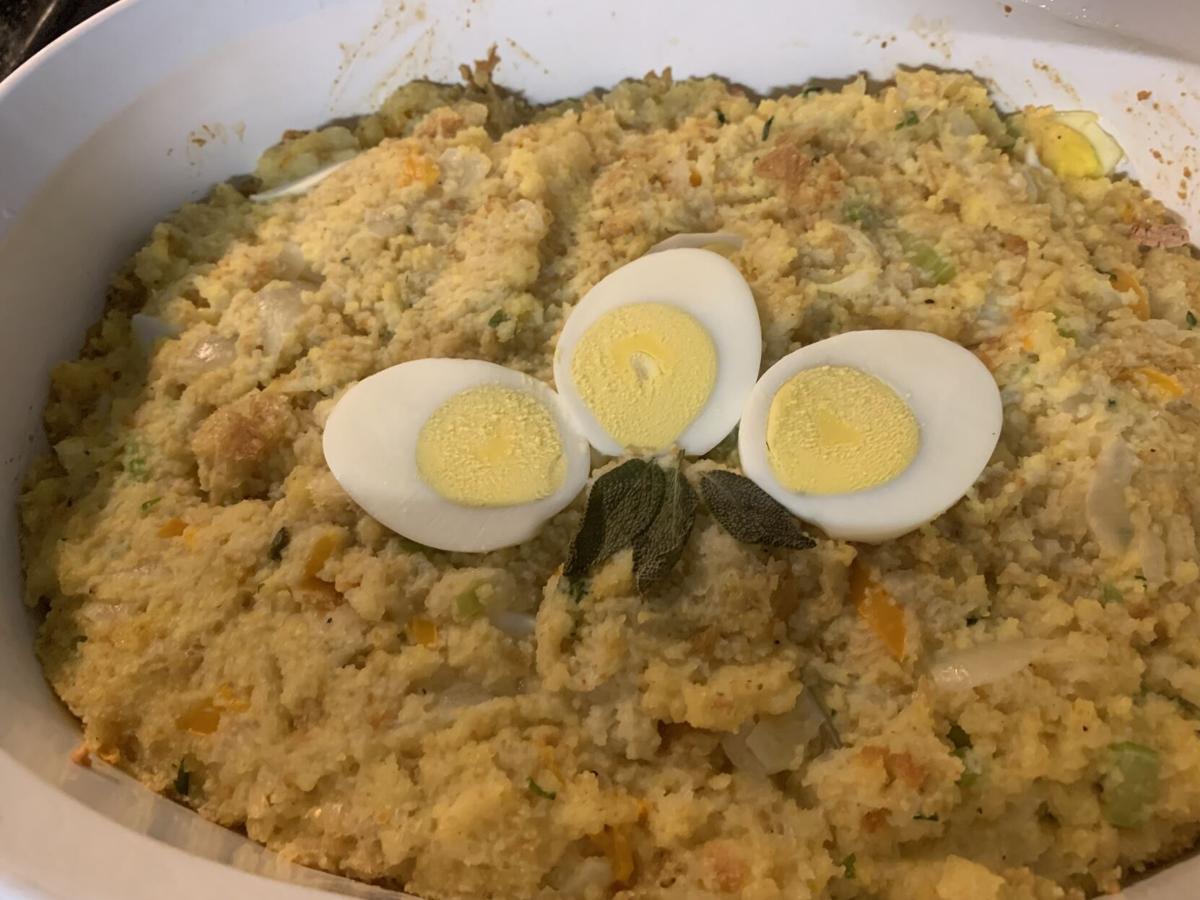 A finished pan of cornbread dressing, great by itself and even better with giblet gravy.

A few simple ingredients are all you need to make a pan of dressing.

The French bread needs to be torn into small pieces so it blends better with the cornbread. This is a good task for the kids who want to help with the holiday meal.

A finished pan of cornbread dressing, great by itself and even better with giblet gravy.

It’s time for the turkey. For some reason, this year in particular, I want a turkey for Thanksgiving.

These are the memories I have when what was once a sizeable family gathered each Thanksgiving, cramming 30 — 40 people into once house, playing football in the yard, the kids’ table, a family prayer of thanks before the meal, then washing up the china, silver and crystal before everyone settled down to talk quietly or grab a quick nap.

Sure, over time the china became Chinet, the crystal turned into Solo cups and maybe that green bean casserole came from the deli. The turkey was probably smoked at the local hog shack; the ham was pre-cut in spirals and just needed warming. It was still the food of our youth, our forebearers, our family.

After all the trials and tribulations of 2020, which have slowed — but not stopped —in 2021, I think it’s time to reclaim this holiday. Don’t even say the “C” word around me until Nov. 26.

Whether you roast, grill, smoke or fry our friend “Tom,” you need to be food safe. That 20-pound boulder of ice needs time to thaw, time to season and time to cook.

* In the refrigerator in a container;

* In a leak-proof plastic bag in a sink of cold water (change the water every 30 minutes); or

Never thaw your turkey by leaving it out on the counter. A thawing turkey must defrost at a safe temperature. When the turkey is left out at room temperature for more than two hours, its temperature becomes unsafe. Bacteria can grow rapidly in the “danger zone” between 40 and 140 degrees F.

Handle Your Turkey the Right Way

Raw poultry can contaminate anything it touches with harmful bacteria. Follow the four steps to food safety—clean, separate, cook, and chill—to prevent the spread of bacteria to your food, family, and friends.

* Wash hands with warm soapy water for 20 seconds before and after handling turkey.

* Use a separate cutting board for raw turkey.

* Never place cooked food or fresh produce on a plate, cutting board, or other surface that previously held raw turkey.

* Wash cutting boards, utensils, dishes, and countertops with hot soapy water after preparing turkey and before you prepare the next item.

Set the oven temperature to at least 325 degrees. Place the completely thawed turkey in a roasting pan that is 2 to 2-1/2 inches deep. Cooking times vary depending on the weight of the turkey.

Use a food thermometer to make sure the turkey has reached a safe internal temperature of 165 degrees. Check by inserting a food thermometer into the center of the stuffing and the thickest portions of the breast, thigh, and wing joint.

Let the turkey stand 20 minutes before removing all stuffing from the cavity and carving the meat.

Stuffing? I come from the camp where what goes in the bird stays in the bird: quartered onions, celery stalks, rosemary, butter. My people don’t do stuffing, they make dressing in a separate pan.

In fact, here is a dressing recipe I’m working on for this year. Get your turkey now, start thawing it well in advance of time, enjoy your Thanksgiving, if it’s for two or two scores and let’s get cooking!

I found the originator for this recipe in Southern Living, Nov. 2018. The original, “Stacy and Joyce’s Cornbread Dressing” is designed to have chicken cooked in with it, use only cornbread and feed 15 people.

I scaled it down, removed the chicken (since I’m having turkey) and added in some French bread, because cornbread is fairly sweet. I liked the balance between sweet and savory that adding the bread gave it, however next time I’ll increase the pepper and sage to my taste.

Bake the cornbread according to instructions (this is the whole milk, egg and Jiffy mix. Jiffy mix is easy and tasty, but you could make from scratch as I do for my 20th c. recipe). Set aside to cool. You can make this the day before.

I picked up a baguette from Vault Meat and Cheese, and it took maybe a third of the loaf to produce 2 cups of finely torn bits of bread. This process takes love and patience but the French bread needs to be as close to the same consistency of the cornbread as it can be or the dressing will be unbalanced and lumpy.

Put the French breadcrumbs in a large mixing bowl and crumble in the cornbread, mixing well.

In a large skillet, heat the oil and butter over medium heat and sauté the onions about 2 minutes. Add the bell pepper, celery, seasoning salt and pepper, continuing to sauté until the vegetables are translucent, about 3 more minutes.

Add the vegetables to the bread and stir it all up. Slice the hard-boiled eggs and add that along with the evaporated milk and half of the chicken stock. I used about a tablespoon of fresh sage, chopped, at this point and next time I’ll double that. I like sage, and fresh isn’t as strong as dried.

Continue mixing, adding more chicken stock until you achieve a moist – but not runny – dressing. Pour this into a casserole dish with a lid and bake at 350 degrees for 40 minutes. If you like, garnish the top with some egg slices or sage leaves before baking.

When a knife inserted in the center comes out clean, the dressing is done. Some people bake their dressing uncovered, but I want to keep the moisture in as much as I can. No amount of giblet gravy can rescue a dried-out dressing.

Serve your steaming hot dressing with the protein of your choice, a gravy and some cranberry relish. It’s pretty good as leftovers, too, warmed up and topped with a poached egg or sliced and smothered in turkey a la crème.

Cooking a whole turkey is not something we do every day. There are local chefs willing to do it for you so you can relax and enjoy your holiday. The one I know about is MJ’s Instincts, which is doing smoked turkeys. You can see a photo of their lovely bird on Facebook.

Co-owner Joe Reed said, “Contact us at megandjoecook@gmail.com or at 903-520-1562 or message us on Facebook and we’ll get you the details.”

There are three safe ways to thaw food: in the refrigerator, in cold water, and in the microwave oven.

When thawing a turkey in the refrigerator:

Plan ahead: allow approximately 24 hours for each 4 to 5 pounds in a refrigerator set at 40 °F or below.

Place the turkey in a container to prevent the juices from dripping on other foods.

Allow about 30 minutes per pound.

First be sure the turkey is in a leak-proof plastic bag to prevent cross-contamination and to prevent the turkey from absorbing water, resulting in a watery product.

Submerge the wrapped turkey in cold tap water. Change the water every 30 minutes until the turkey is thawed. Cook the turkey immediately after it is thawed.

A turkey thawed by the cold-water method should be cooked immediately. After cooking, meat from the turkey can be refrozen.

Follow the microwave oven manufacturer's instruction when defrosting a turkey. Plan to cook it immediately after thawing because some areas of the food may become warm and begin to cook during microwaving. Holding partially cooked food is not recommended because any bacteria present wouldn't have been destroyed.

A turkey thawed in the microwave must be cooked immediately.