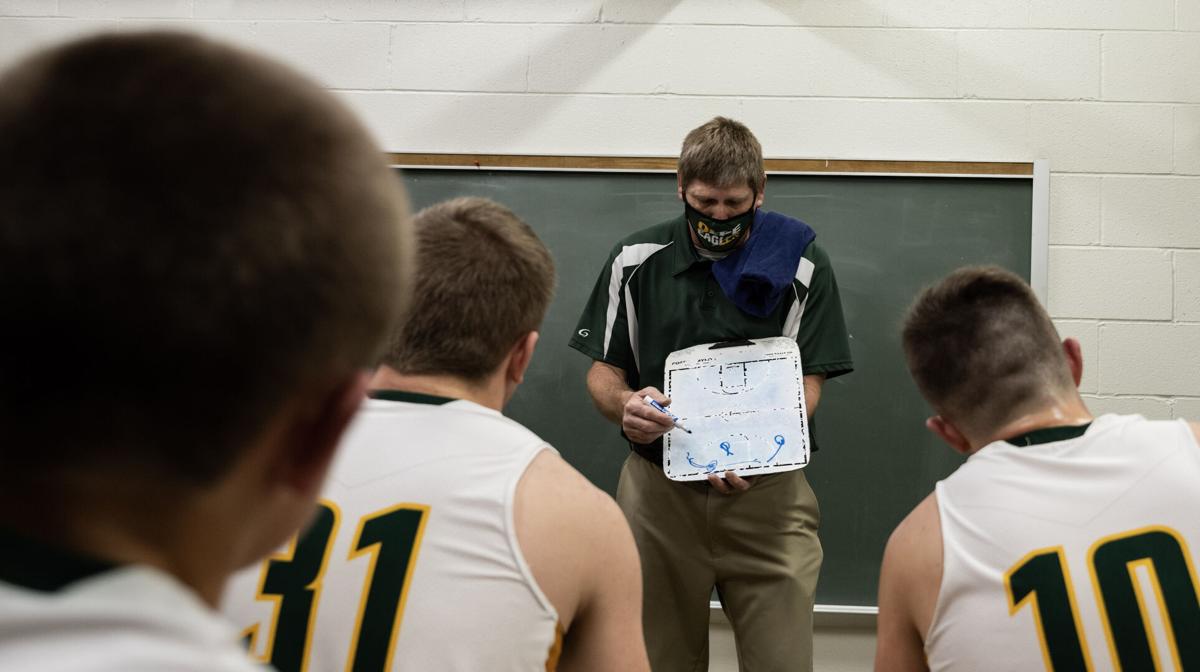 Chris Schmidt goes over a play with the Olpe Eagles in the locker room, Jan. 12. 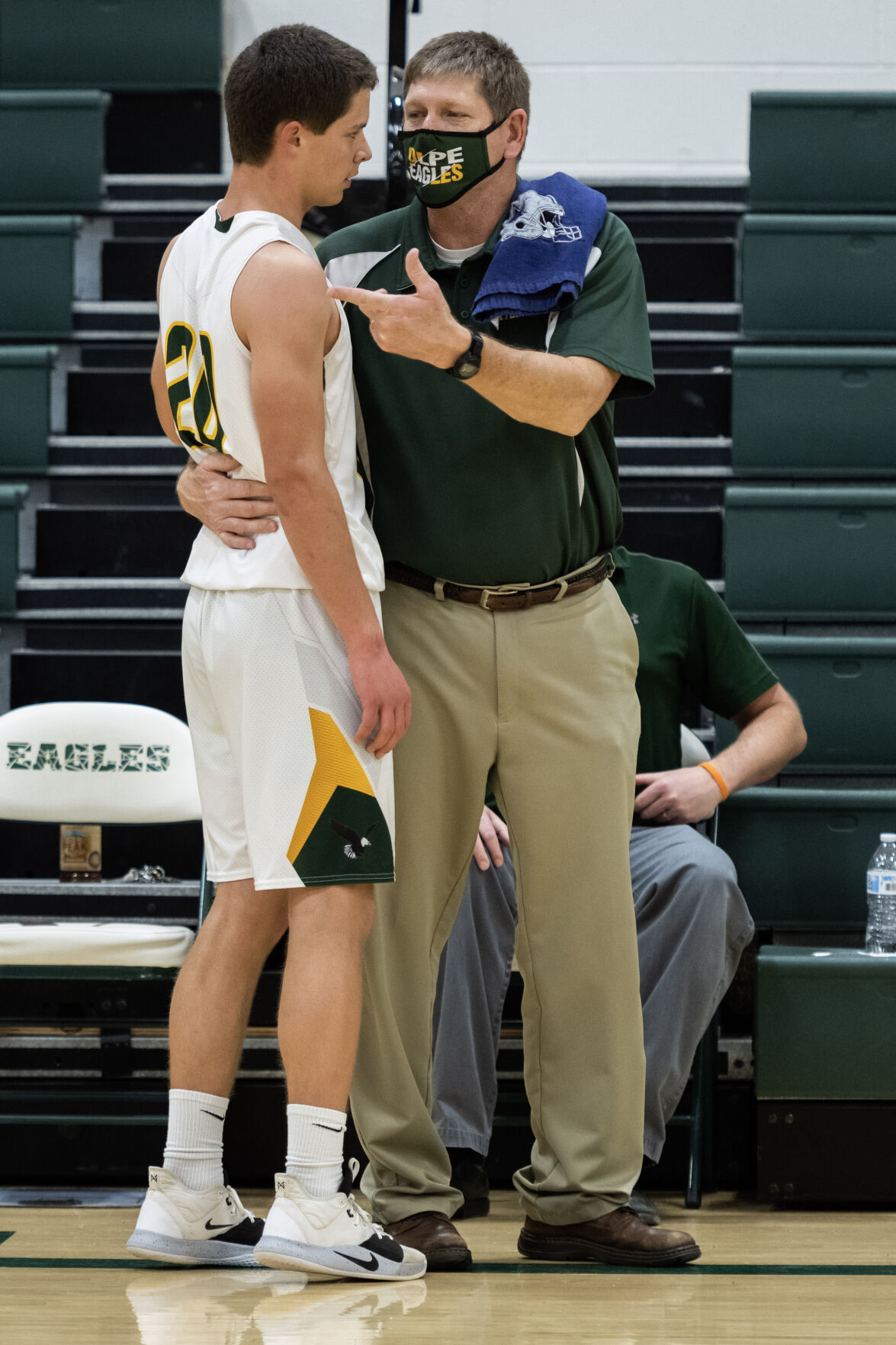 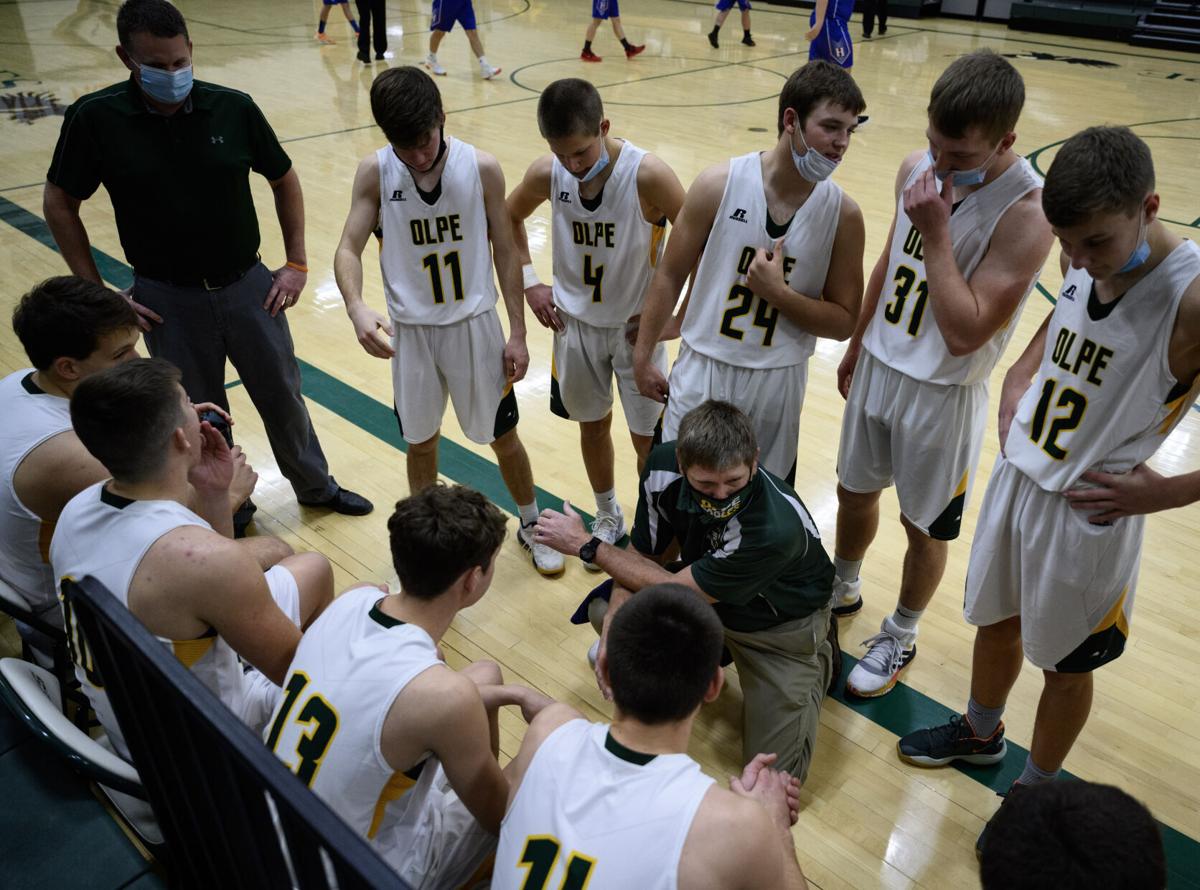 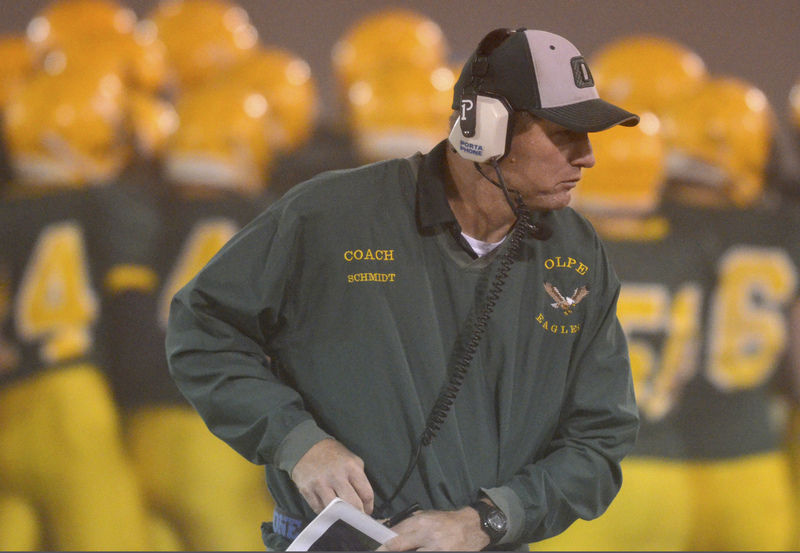 Olpe head coach Chris Schmidt looks onto the field during the Eagles' sub-state win against Troy, in 2014. 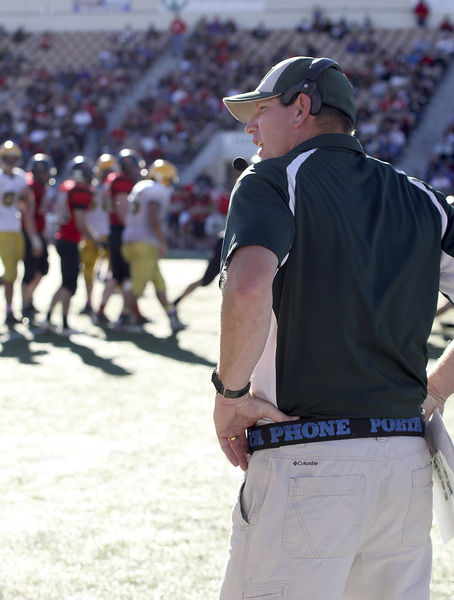 Olpe head coach Chris Schmidt stands on the sideline during the Eagles’ 2-1A state title game against Ell-Saline, in 2014.

Chris Schmidt goes over a play with the Olpe Eagles in the locker room, Jan. 12.

Olpe head coach Chris Schmidt looks onto the field during the Eagles' sub-state win against Troy, in 2014.

Olpe head coach Chris Schmidt stands on the sideline during the Eagles’ 2-1A state title game against Ell-Saline, in 2014.

Editor’s note: This is part two in a two-part series about Olpe High School Athletic Director Chris Schmidt, detailing his winning tenure at his hometown school.

Darin Redeker — a distant cousin of Matt Redeker — was 10 years old in 1994 when Chris Schmidt moved in next door to his family in Olpe. Schmidt, who only had sisters, effectively adopted Redeker as his “little brother” and the two took to each other right away.

“He and I essentially became best friends,” said Redeker, who graduated from Olpe in 2003. “We did stuff together every day. Played games and did all kinds of things. And then eventually he became my coach in junior high.”

Not only did Schmidt coach Redeker in multiple sports during his middle and high school years, but Schmidt also married Redeker’s first cousin, Jenny, and was a groomsman in Redeker’s wedding.

But even with their close personal friendship, as his coach, Schmidt never favored Redeker over any of his other players.

“He absolutely loved the other kids just as much, if not more, than he did me,” Redeker said. “He would do anything for them. He’s so passionate. Literally, it’s what he cares about so much, other than maybe [Dallas] Cowboys football.”

Over the years, Schmidt’s role at the school has grown and morphed. Today, in addition to spear-heading the football program, he is the athletic director, the boys’ basketball head coach and a physical education and weights teacher for students in grades three through 12.

If one were to ask Schmidt how he manages to fill those four professional roles on top of his personal life, he would redirect any commendation to the people around him.

“It starts with my family. My wife, Jenny, and my two boys. They’ve sacrificed a lot over the years because I was gone a lot. They’re right there with me. Every ball game, my wife is there. At state games, she travels, helps make meals for the kids, stuff like that. She’s part of our team.”

His two sons are now grown, but they’ve been around the team their whole lives, from serving as water boys when they were little to spending time in assistant roles as adults.

Schmidt also praised his coworkers at the school as well as his football and basketball coaching staffs for his success and his ability to wear so many different hats for so many years.

“I’ve got great assistant coaches in both sports,” Schmidt said. “I’ve been fortunate to have the same ones for a long time. And then my administration and everybody around here. Secretaries and teachers who help do things before and after the games and getting preparations [in place]. I could not do what I’m asked to do without people helping me out.”

But even with his experience, routines and external supports, Schmidt conceded that this school year has been particularly challenging, especially concerning his duties as the athletic director.

“The end of last year and the beginning of this year has been something we’ve never had to go through,” he said. “I throw a big shoutout to our administration for preparing everything this summer for us to go to school and see our kids. We’ve been fortunate to have our doors open all year.”

It seems that Schmidt and the rest of the Olpe Schools staff have been as efficient as any in walking the tightrope of protecting the students’ wellbeing and ensuring their full participation in scholastic and extracurricular activities.

And Schmidt, at least, has been recognized for this. The Topeka Capital-Journal named him the 2020 Coach of the Year and, as previously mentioned, he was selected to coach in the 2021 Shrine Bowl.

“It’s a great experience,” Schmidt said of his prior involvement with the Shrine Bowl. “I’ve always enjoyed it.”

Schmidt will not be the only one representing Olpe in the 2021 Shrine Bowl. Jordan Barnard, a senior tight end, defensive lineman and occasional linebacker for the Eagles this season, was also chosen for the honor.

“I’ve known [Barnard] since he was a little kid,” Schmidt said. “He had a good year for us. He was solid. On the offensive side of it, he was a good blocker for us. He was our possession receiver. When we needed a play, he was the kid we looked at. … Defensively, he was solid up front on the defensive line. …

“He was one of those seniors that, in the offseason, really stepped up and showed our young kids. He does a great job working with our young kids and helping them get better. I’m very happy that he gets the opportunity to get another chance to put the pads on and play for a good cause in the Shrine Bowl. … He’ll represent Olpe really well.”

Schmidt was the one who got to break the news to Barnard that he’d been selected to play in the Shrine Bowl, which Barnard had eyed as a personal objective of his.

“I’d always known about [the Shrine Bowl] with older players, seniors in the past, who had gotten it,” Barnard said. “It had always been a goal to try to make the Shrine Bowl, to try to earn that.”

Barnard echoed the sentiments of others who have played for Schmidt in pointing out the “bond [Schmidt] makes with the students and what he can get out of them each day and every practice and every class you have. He really knows how to connect with you and how to make you the best of yourself.”

Darin Redeker — who is now 36 and living in Olathe with his wife, son and another child on the way — wants the people of Olpe to know how lucky they are to have someone as loyal and upstanding as Schmidt filling the positions he does.

“The quality of coaching at a small school like that, who dedicate their time, who aren’t looking for a better job, a bigger school ... it starts with coaching and the program that he’s built over the years,” Redeker said. “[I want] people to really appreciate what they have and not take it for granted, because it’s rare at a small school to have such a good coach, who cares so much about the kids.”

For Schmidt, the championships and the accolades are great, but the real joy is the opportunity to interact with young people and help them develop into productive members of society.

“I could not do this without good people around me."

I knew Chris when he was a kid. He hung out at the high school after hours as his mother taught there. Chris was a gym rat and people person. It does not surprise me to see the success he has achieved as a coach and mentor. Congratulations Chris!

You would never guess Olpe, with a 50 year newer school,sports director, coaches, and assistant coaches, was the same size and in the same district and "using the same budget" as Hartford High, who had a coach/history teacher.