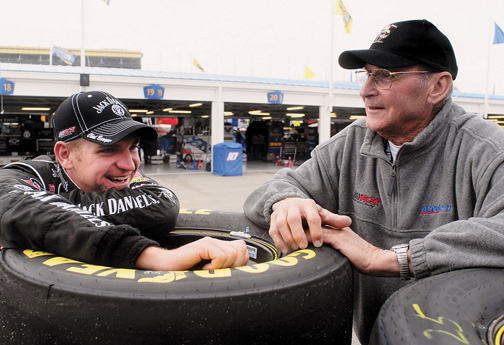 NASCAR driver Clint Bowyer talks with Floyd McCracken of Emporia over a stack of tires in the garage area at the Kansas Speedway while waiting his turn for qualification laps for Sunday’s Nextel Cup Banquet 400, Sept. 29, 2006. 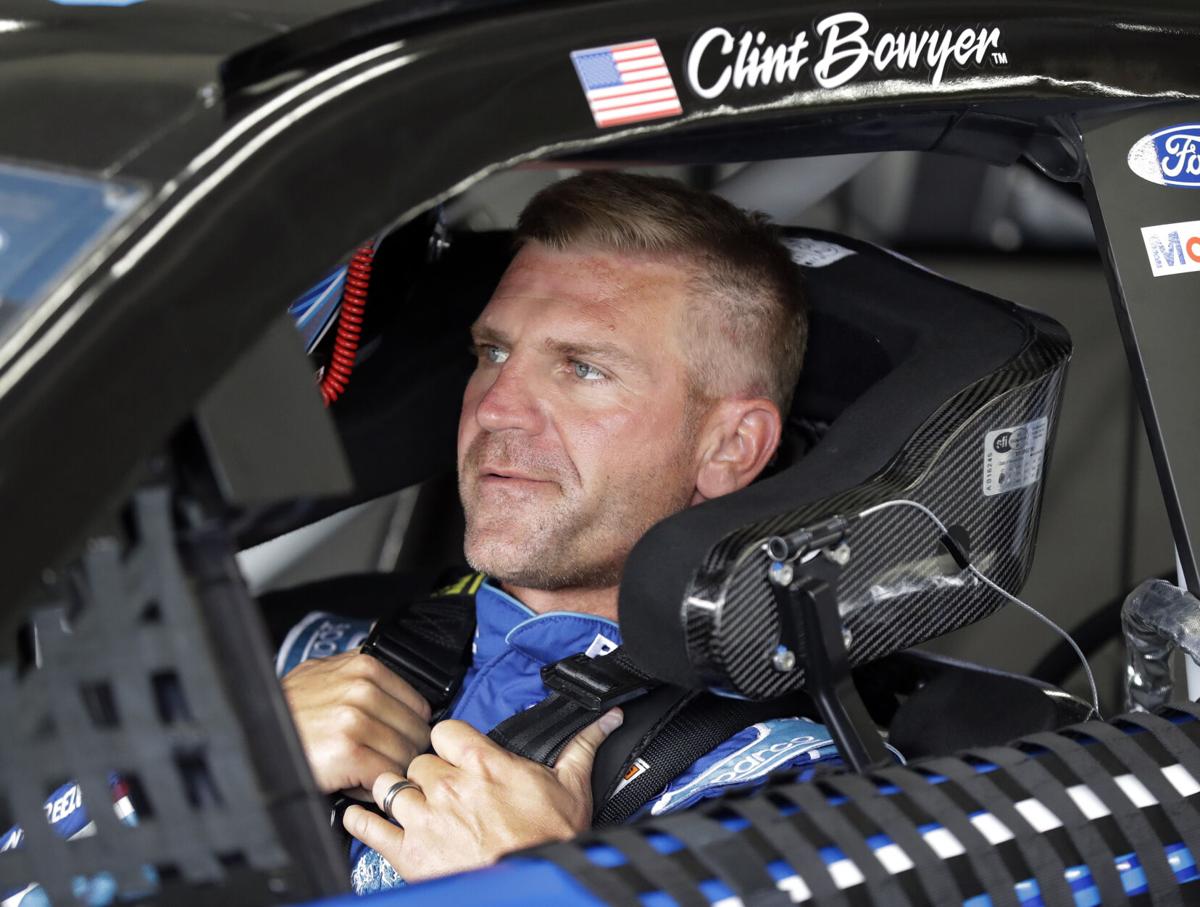 In this May 23, 2019, file photo, Clint Bowyer waits in his car before practice for a NASCAR Coca-Cola 600 Cup series auto race at Charlotte Motor Speedway in Concord, N.C. Bowyer will retire at the end of the NASCAR season and join the Fox Sports booth as an analyst. 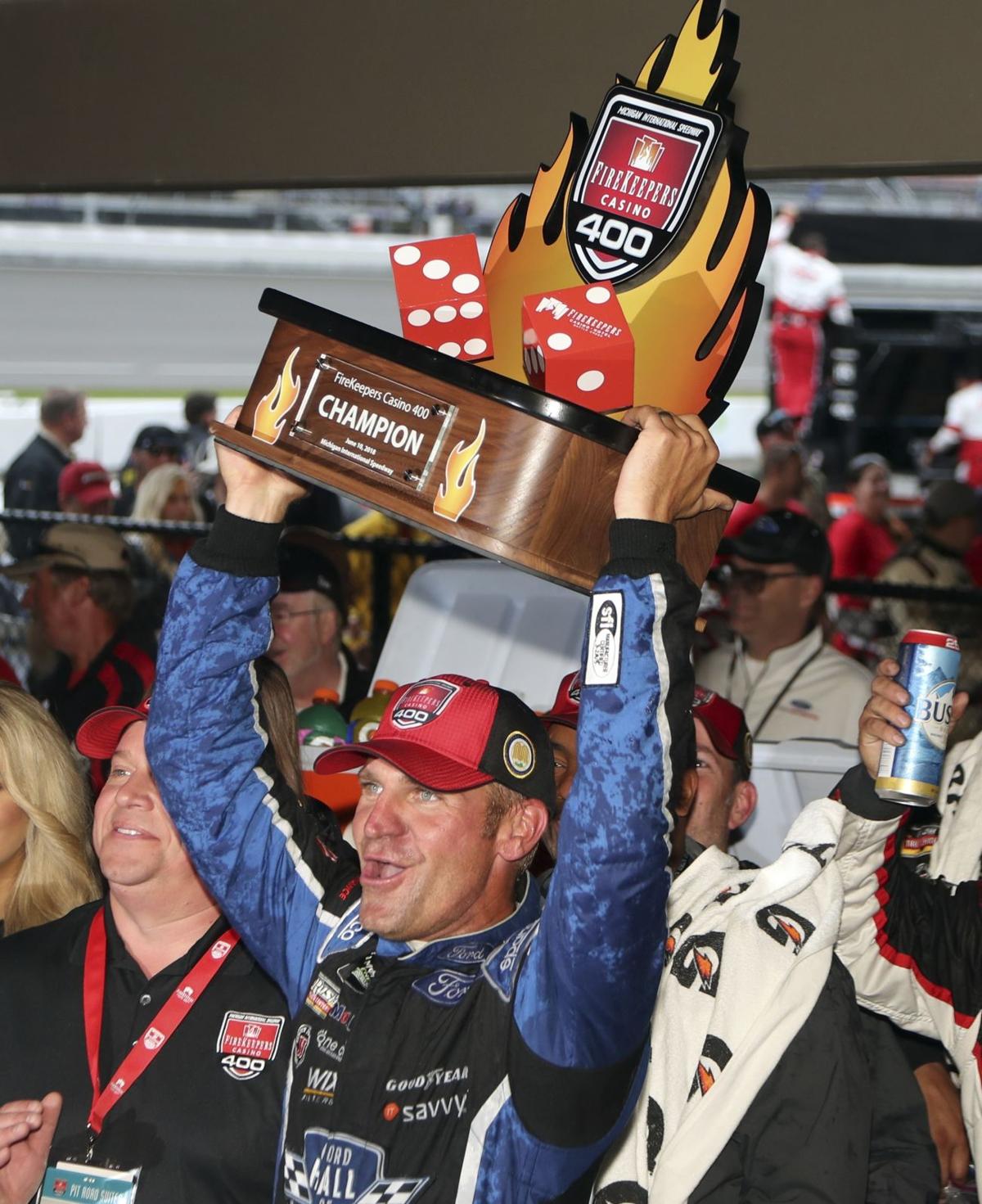 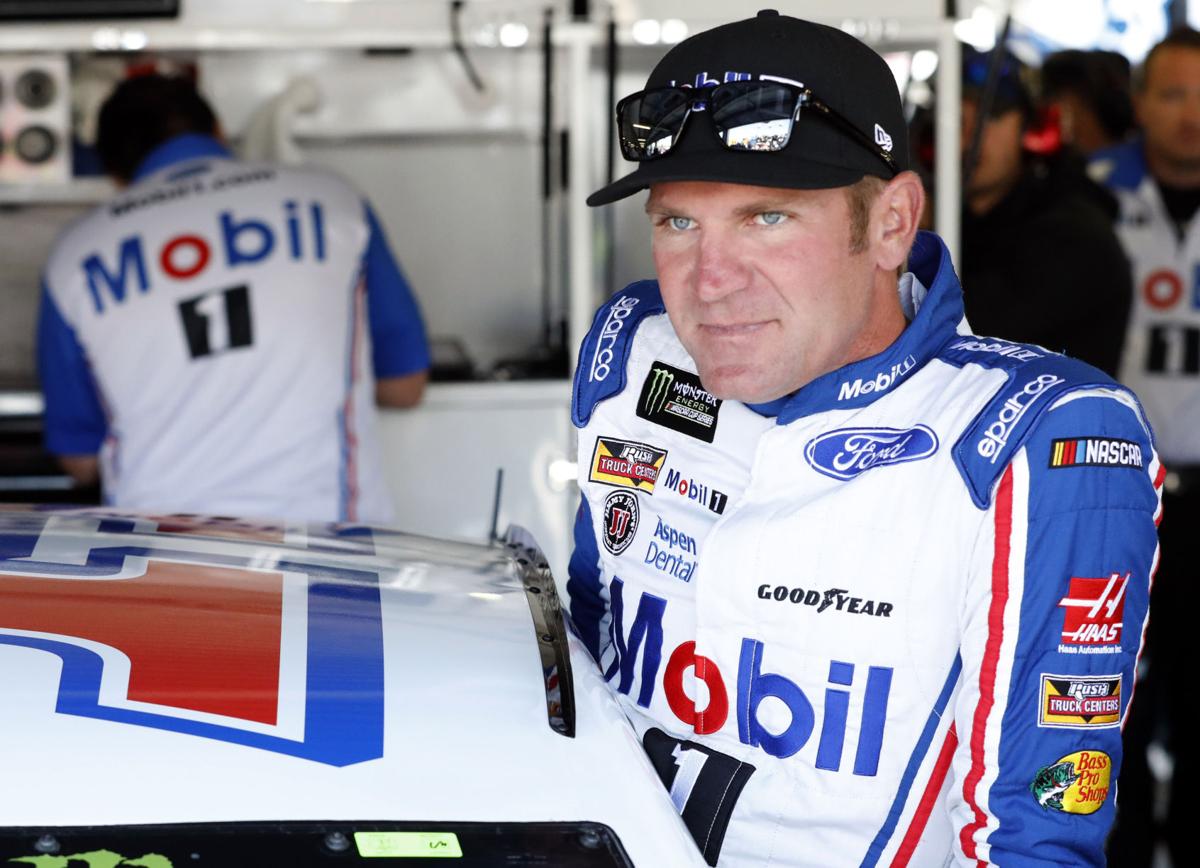 Driver Clint Bowyer climbs into his car during practice for the NASCAR Monster Cup race at Kansas Speedway in Kansas City, Kansas, Friday. 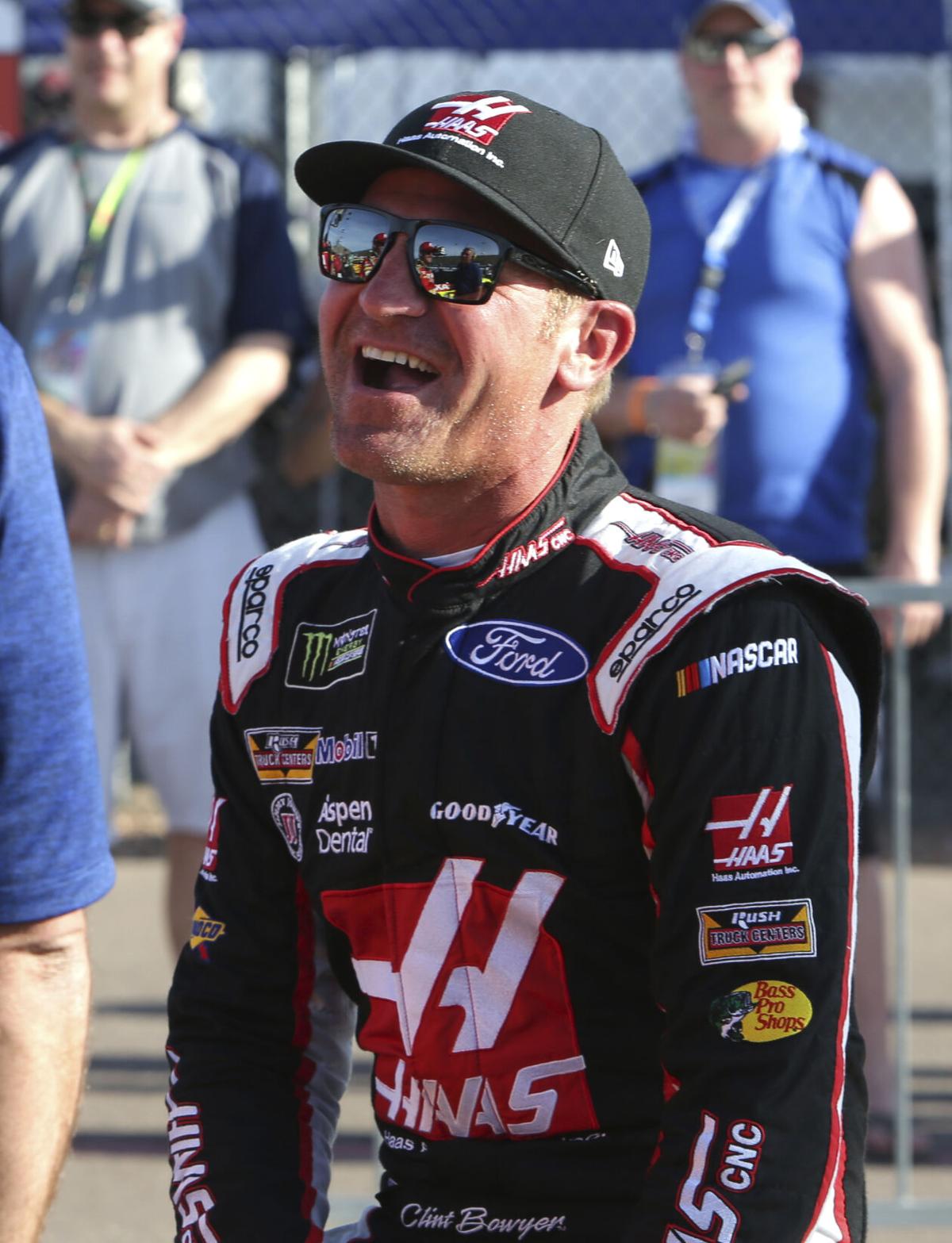 NASCAR driver Clint Bowyer talks with Floyd McCracken of Emporia over a stack of tires in the garage area at the Kansas Speedway while waiting his turn for qualification laps for Sunday’s Nextel Cup Banquet 400, Sept. 29, 2006.

In this May 23, 2019, file photo, Clint Bowyer waits in his car before practice for a NASCAR Coca-Cola 600 Cup series auto race at Charlotte Motor Speedway in Concord, N.C. Bowyer will retire at the end of the NASCAR season and join the Fox Sports booth as an analyst.

Driver Clint Bowyer climbs into his car during practice for the NASCAR Monster Cup race at Kansas Speedway in Kansas City, Kansas, Friday.

The next step wasn’t on Clint Bowyer’s radar a year ago. Heck, even a week ago, the 16-year NASCAR veteran didn’t know it was coming. As of earlier this week, Bowyer says he was “full-speed ahead,” seeking a new contract for another season in the NASCAR series.

He and his brother, Casey, have long formed an unconventional duo in the sport, pursuing contracts and sponsorships on their own, rather than relying on big racing teams and organizations to secure new deals. And even in the midst of COVID-19, and at the end of a difficult season for the 41-year old driver, Bowyer was prepared to be in a car on the racetrack in some way, shape or form next season.

Then, a different kind of deal came his way and the Emporia-native simply couldn’t turn it down. Next season, Bowyer will trade in the driver’s seat for a spot in the TV booth on Fox’s broadcast of NASCAR, and he is ready to seize the sudden opportunity.

“An offer came across the table and redirected everything,” Bowyer told The Emporia Gazette Friday morning. “It just kind of happened. I wasn’t expecting it. I could have gone back to racing, but this is just too good of an opportunity right now.”

Bowyer, the larger than life figure who made his mark in both NASCAR and at home, is retiring from racing.

In a letter posted to social media Thursday night, Bowyer announced to the NASCAR world and to fans all across the nation that the 2020 season, which ends on Nov. 8, will be his last in a race car. In 2021, he’ll join the Fox Broadcast team, a move that opens a new life chapter for Bowyer while keeping him close to the sport he’s been tied so closely with for more than 35 years.

“I have a new opportunity to do what’s next in my life,” Bowyer wrote in the letter. “In 2021, my suit will no longer be fireproof.”

Bowyer got his start at racetracks like Thunderhill Speedway in Mayetta and Heartland Park in Topeka. Over his 16-year career, he raced for three of the biggest names in the sport — beginning with Richard Childress Racing in 2006, then onto Michael Waltrip before signing with Stewart-Haas in 2015 — and emerged as a consistent contender, earning 10 career cup wins while establishing himself one of the the biggest and brightest personalities in the series.

And while he raced on the biggest stages in the country, Bowyer always kept his hometown in his heart. During the early years of his career, he established the 79 Fund, an charity aimed at serving the children of Emporia. Over the past decade and a half, the fund has delivered more than $3 million into the community and was instrumental in the construction of the Clint Bowyer Community Building on the Lyon County Fairgrounds.

Based in Mocksville, North Carolina with his wife Lorra and their two children, Cash and Presley, Bowyer is looking forward to something new as he prepares to bring his charisma and expertise to the TV booth. It will be a change of pace and more time with the family.

By the time he entered kindergarten, and likely before he could even read, Bowyer was already racing. Born as the middle son of three boys to Chris and Jana Bowyer, all of the Bowyer brothers were on motorcycles by the time they turned 5.

As a motocross racer, Bowyer was prolific, earning more than 200 wins before he was even a teenager. When he graduated to stock cars in the mid-1990s, racing on tracks around Kansas and throughout the midwest, Bowyer’s career took off. After a series of impressive finishes, most notably a second-place result at Nashville Superspeedway in 2003, he got a call from Richard Childress.

Bowyer was officially a professional racer.

“He didn’t know how he was going to get there,” his father said. “But he knew if he did well racing wherever he was, he’d keep moving forward. That’s exactly what he did.”

When he joined the NASCAR series full-time in 2006, Bowyer was an immediate success, earning three top-5 finishes and 11 top-10s during his debut season, and he earned his first win at New Hampshire in 2007. Bowyer’s finest season came in 2012 when he earned three wins and a runner-up finish in the Sprint Cup Series behind Brad Keselowski. His longevity and his 2008 Xfinity Series title are among the standout achievements of his career.

But Bowyer gained a reputation more so for his personality off the track. Among fans, Bowyer quickly became a popular driver with his relatable and down-to-earth personality. In Bowyer, fans saw themselves, and within a sport that’s garages are filled with plenty of prickly and intense personalities, he emerged as a friendly, approachable breath of fresh air across the sport.

“He was the ultimate guy you’d want to have a beer with,” Jeff Gluck, who covers auto racing for The Athletic, said. “His sense of humor, his energy, his enthusiasm. All those things translated and gave such an appeal to NASCAR fans. He was comfortable in his own skin and he was able to succeed that way just by being himself, which is really a gift.”

That personality is what drew Fox executives to Bowyer and in turn his new role with the company.

Earlier this year, as sports including NASCAR were shut down due to COVID-19, Bowyer joined forces with NASCAR legend Jeff Gordon on broadcasts of the sports’ esports iRacing series on Fox.

“It gave me the opportunity to get my feet wet and be a part of the Fox broadcast,” Bowyer said. “It opened my eyes to this. It was a lot of fun.”

For NASCAR, the race broadcasts were an effort to remain relevant during a turbulent time. As for Bowyer, whether he knew it or not, they were an audition for a role that this week became the next step in his career. In the world of NASCAR, it’s the biggest media move since Dale Earnhardt Jr. joined NBC.

“It’s not going to be something that people have heard before,” Gluck said. “Clint’s going to be so relevant and fresh out of the seat, he’ll really be able to relate to everything that’s going on out on the track and all the situations the drivers face. It won’t just be entertaining and fun, but informative, too.”

In Emporia, Bowyer is revered for far more than his accomplishments on the track and he’ll be remembered long past his time on the Fox team. No matter how far he’s gone or where his career has taken him, the EHS graduate has never forgotten his home.

Since the beginning of his career, Bowyer has been involved with charitable efforts, starting with causes through NASCAR. But as he climbed the ranks and cemented his status in the sports, Bowyer’s thoughts returned to Emporia.

“I was doing some NASCAR Foundation things,” he said. “All the while, I’m thinking that back home there were things that needed to be done. I wanted it to be meaningful and I want to know where it’s going.”

Through a partnership with the Emporia Community Foundation, Bowyer established the 79 Fund. The organization’s first gift in 2008 gave all children ages 16 and under free access to the Jones Aquatic Center. Today, it holds an annual golf tournament and benefit auction, and its donations fund programs for children around Emporia.

The most significant contribution, of course, is the Clint Bowyer Community Building on the site of the Lyon County Fairgrounds. The genesis of the idea came from a simple dilemma. When the 79 Fund was looking for somewhere to host its annual benefit event, it couldn’t find the right facility.

So, Bowyer built one.

“The most prideful thing is knowing that the proceeds year after year go to great causes and change people’s lives,” Bowyer said.

“He could have forgotten Emporia a long time ago,” Ray Toso, the Chairman of the 79 Fund, said. “But Clint has never left Emporia. He’s just been away from Emporia. He still has it in his heart.”

Retirement will give Bowyer more time in Emporia and more time with the organization he holds so dearly. It’ll also give him more time with his family. On Friday morning, not even 24 hours after he announced his retirement, Bowyer was on his way to the auto shop. Cash’s birthday is coming up and his gift is a new outlaw car.

“We’re full speed ahead going racing,” Bowyer said. “That’s what this family does.”

While Bowyer on Thursday took a step away from the sport he’s known his entire life, he’s not going very far. Racing, passed down to Cash, is still central to his family. And the time in the booth with Fox will keep Bowyer connected and close with the community he says has become a family over the past 16 years.

At the beginning of this week, Bowyer had his eyes on another season in the driver’s seat. But his outlook is now changed, and the race car driver who never forgot Emporia is ready for the next turn.

“It’s bittersweet,” he said. “One thing I know is I can’t go back from it. It’s been a hell of a chapter, and now got some room left to build another good one.”

"Since I’ve been 5-years-old, I’ve been at a racetrack every weekend. I’m looking forward to doing some other things.”