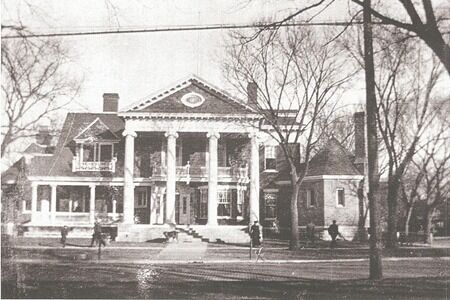 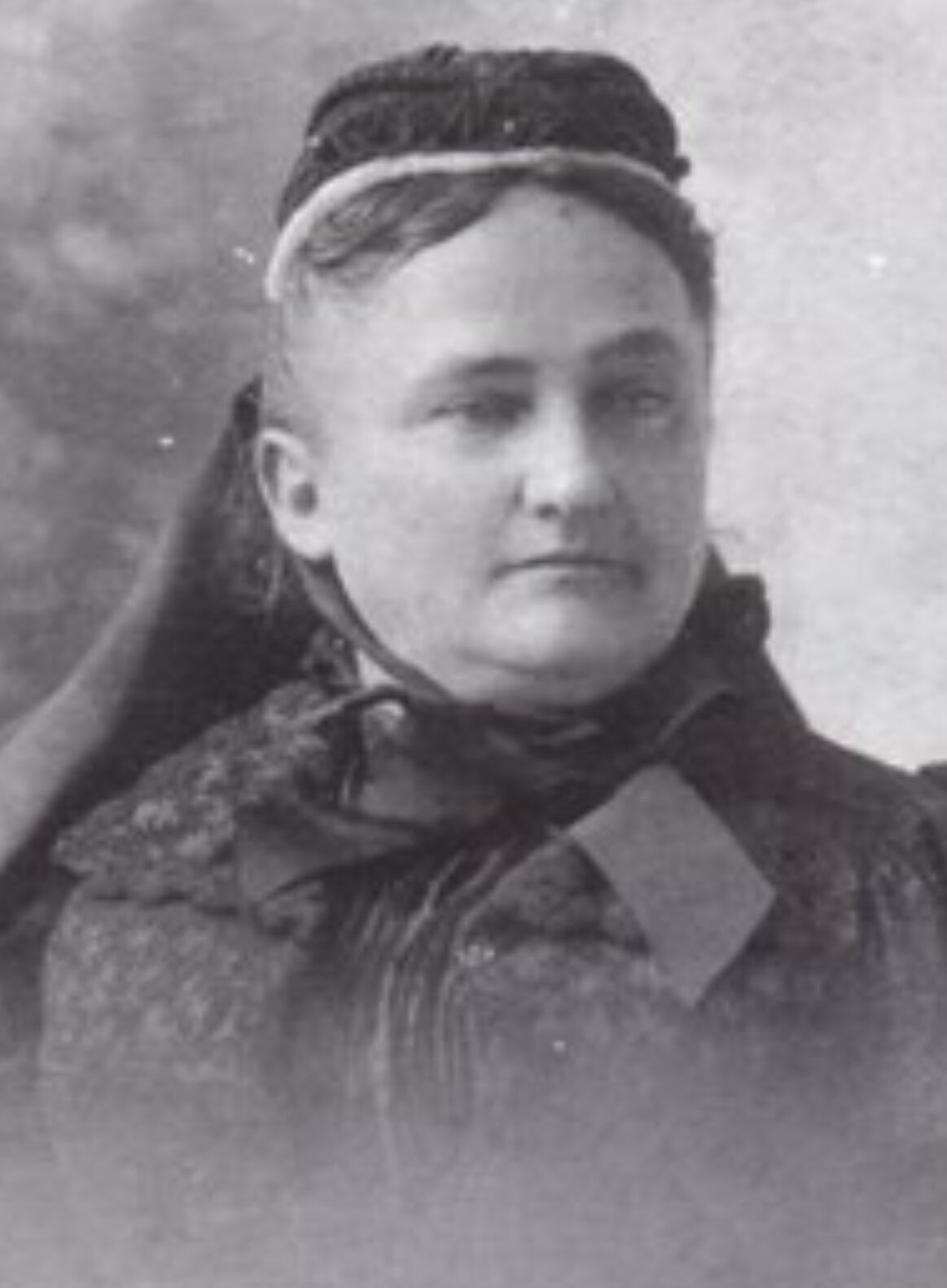 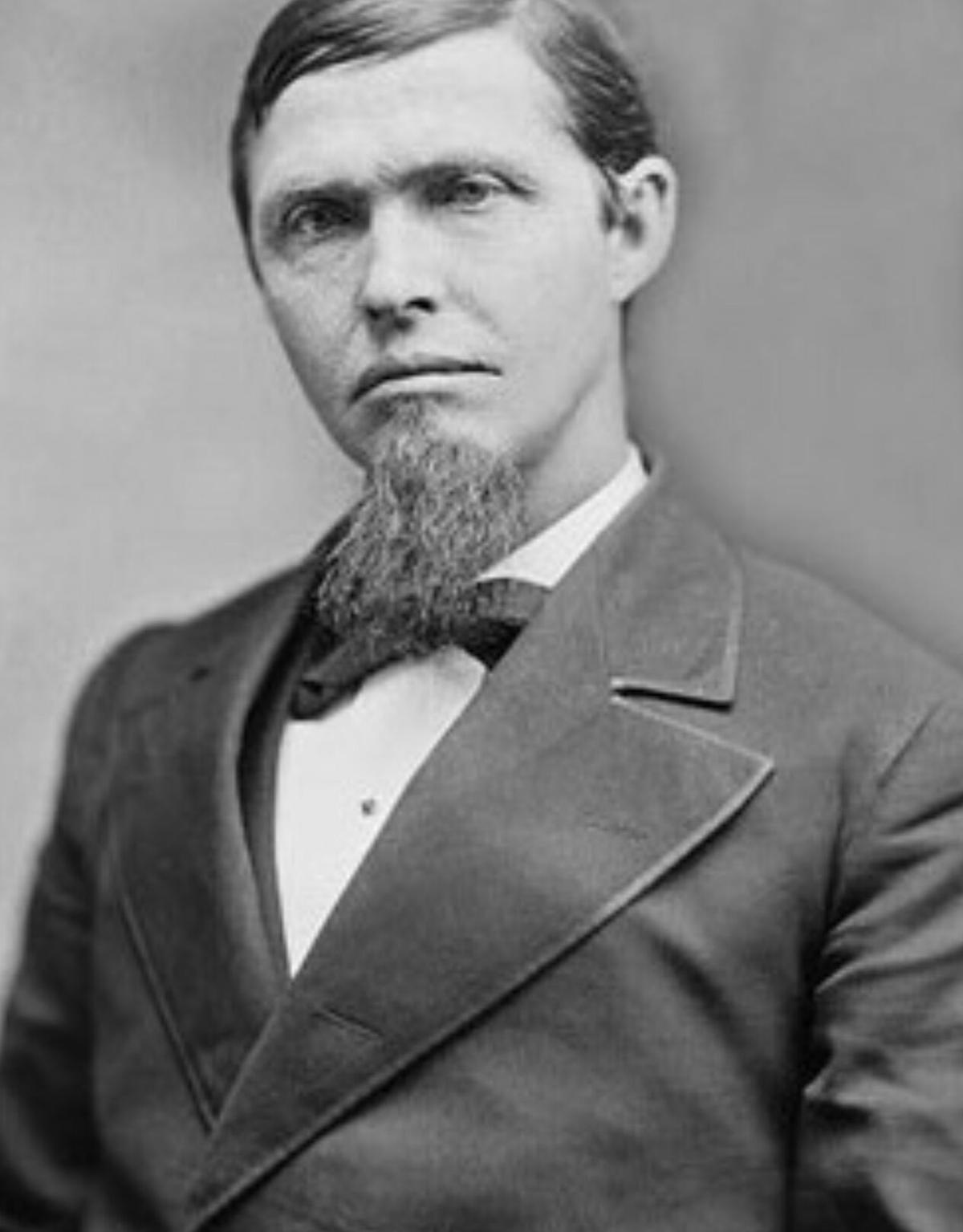 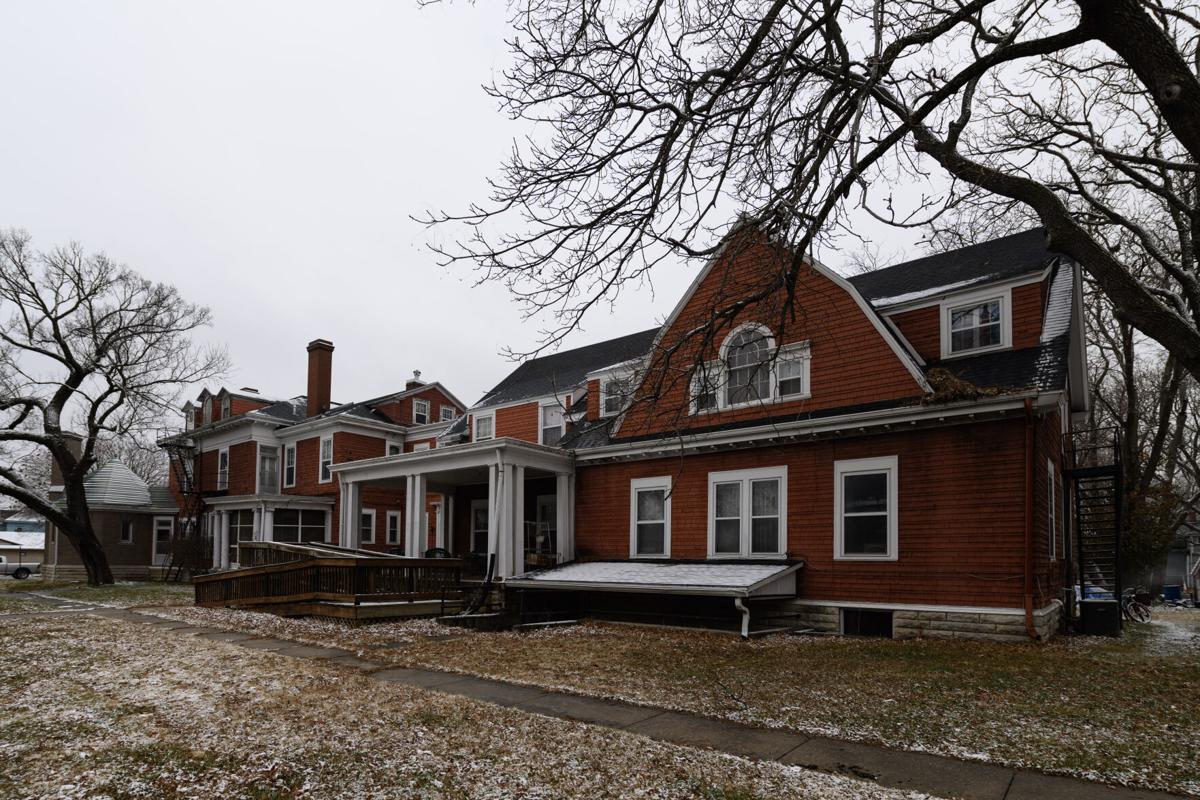 Carrie Plumb started adding on to the original Plumb family home after her husband’s death in 1891. 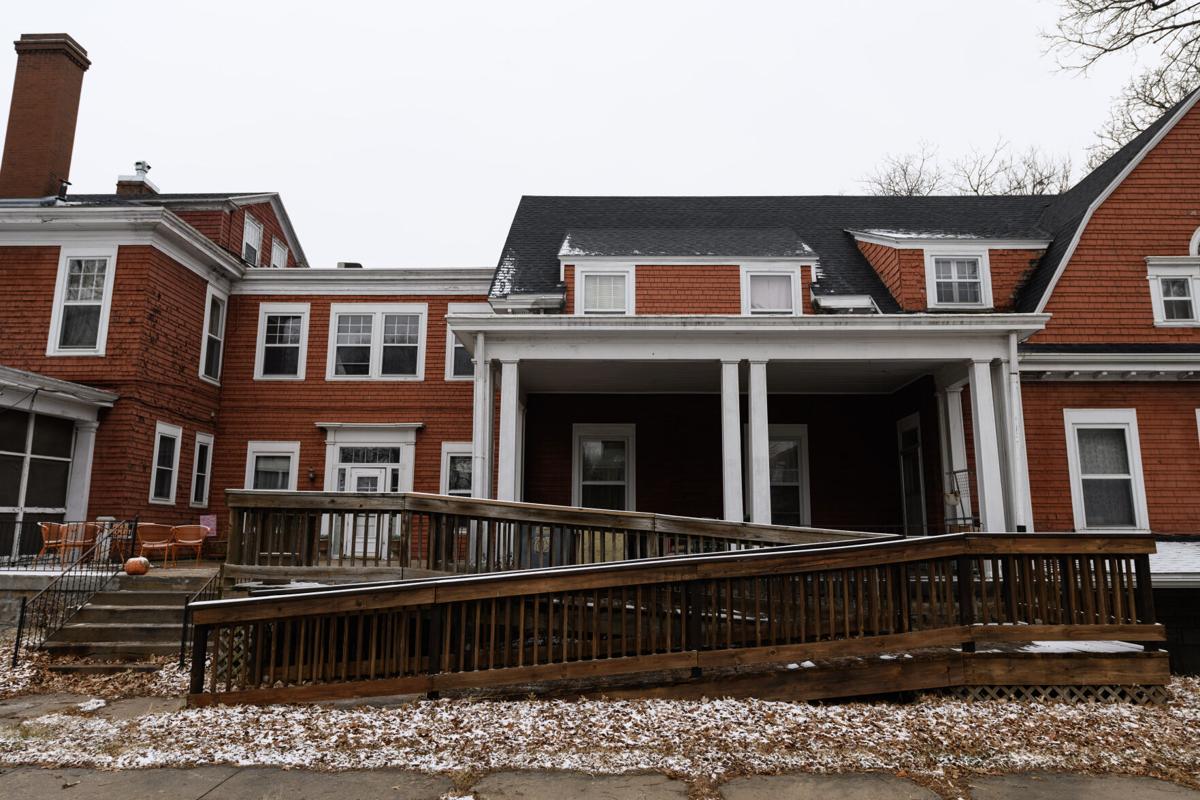 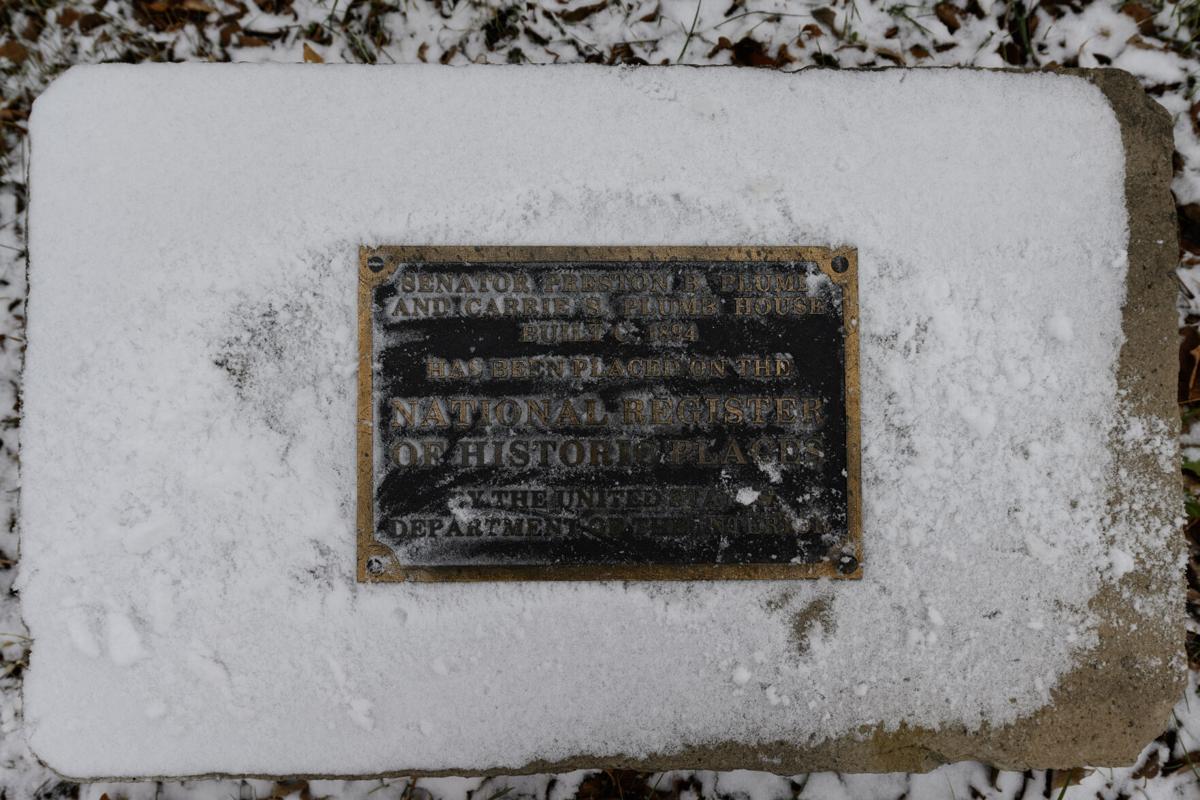 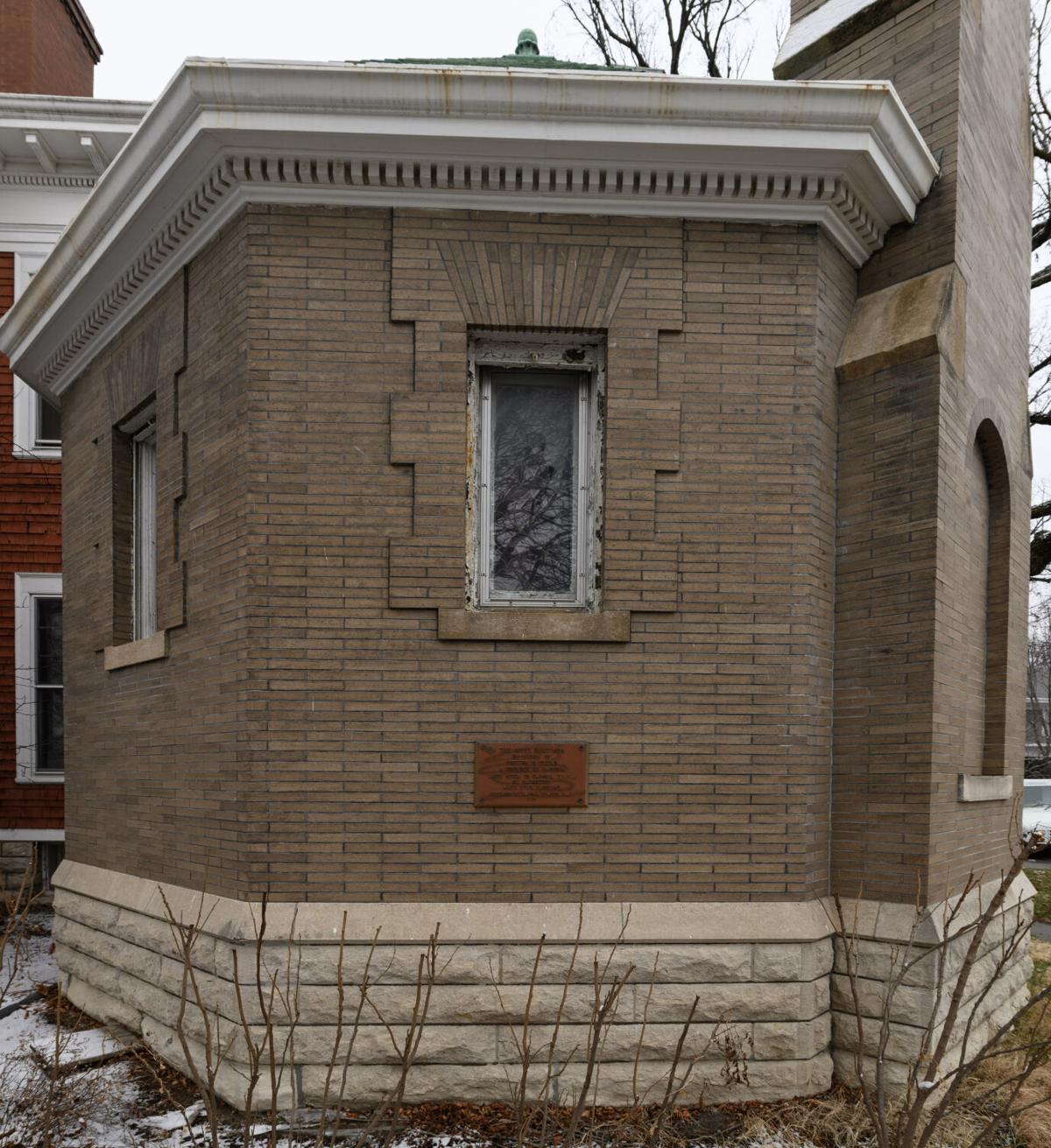 Carrie Plumb started adding on to the original Plumb family home after her husband’s death in 1891.

Editor’s note: This is part one in a two-part series on the history of Plumb Place and its impact on women in the community.

Plumb Place, 224 E. Sixth Ave., holds an umbilical-cord connection to Emporia’s best-known founding father. Simultaneously, it holds a paradoxical history as a haven for women, a center of contentious debates over ownership and use, and an ongoing struggle to maintain operational funds.

In 2020, it is the latter that has brought the home for women to an uncertain future, without substantial support from the public.

The stately brick building with pillars, built in the 1870s, had been the home of one of Emporia’s founders, Preston Bierce Plumb, his wife Caroline (Carrie), and their family.

Preston B. Plumb had been what modern-day observers would call an overachiever.

Plumb was born on Oct. 12, 1837, in Berkshire, Ohio. Because his parents were poor, the youngster learned to rely on his own resources, according to “Kansas State History,” compiled and written by the Federal Writers’ Project under the Works Project Administration.

At the age of 12, he entered Kenyon College at Gambier, Ohio, worked his way through, and emerged with skills as a printer. At the age of 15, he bought the plant of an abandoned newspaper in Marysville, Ohio, using money his parents had borrowed by mortgaging their home. Then he founded the “Xenia News” in Xenia, Ohio.

According to a Plumb biography by Matthew E. Stanley, University of Cincinnati, the young man had been drawn to the Free-State cause in “Bleeding Kansas,” where border wars were going on between proslavery border ruffians and anti-slavery Jayhawkers.

After a preliminary visit to the Kansas territory in June 1856, Plumb — then 18 — returned with “10 recruits and two wagons … loaded with armaments including a brass cannon. Plumb and his men, called ‘Grizzlies,’ delivered their military cargo to Topeka on Sept. 25. …” Stanley wrote.

Plumb sold his interest in the Xenia paper and began publishing the “Herald of Freedom” in Lawrence, before striking out with four other men to build a new town: Emporia.

Here, he founded another paper, the “Kanzas News.” With strong promotion from that newspaper and the “Herald of Freedom,” Emporia’s population had reached 541 by the summer of 1859, the “Kansas State History” writers said.

Plumb also had been secretary of the Free-State Convention in 1857 and a member of the Leavenworth Constitutional Convention in 1859. He split his time between Kansas and Ohio, where he entered law school; he was admitted to the bar in 1861.

Back in Kansas, after helping organize the 11th Infantry Unit and being mustered in as a captain of Company C, Plumb saw combat at Prairie Grove and was active in campaigns against raids in 1863 and 1864. By the time he was discharged in September 1865, he had been promoted to lieutenant colonel.

He returned to Emporia to practice law, and co-founded the Ruggles & Plumb law firm in 1867. That same year, Stanley wrote, Plumb married Caroline A. Southwick, whose father operated an underground railroad in Ashtabaula, Ohio. Plumb also was prosecuting attorney of Lyon County, became president of the Emporia National Bank in 1873, and was instrumental in bringing railroad service to the area.

He served one term as a representative to the Kansas House and was speaker there in 1868. Voters elected him to the U.S. Senate in 1877 and subsequently elected to two more terms.

He was known in Washington, D.C., as a “workhorse” who skipped lunch and worked far beyond traditional hours. While his actions as a senator gained him national attention, his health paid a premium price for the effort. He fell ill in the spring and summer of 1891, when the Populists and Plumb’s Republican party were fighting a major political battle.

“He was advised by doctors to retire from politics and convalesce in Europe,” Stanley wrote. “He did neither, and he died in Dec. 20, 1891, in Washington, D.C.” Plumb was buried in Maplewood Cemetery.

After Plumb’s death, Carrie Plumb began an extensive remodeling project to the family home, making improvements and adding wing after wing to the original house.

A Home for Women

The home passed into the hands of the Young Women’s Christian Association in 1920, through the generosity of the couple’s children. The house was deeded to the organization by daughters Mary Plumb of Emporia, Mrs. Schuyler Brewster of Pasadena, Calif., and Mrs. George Griffith of Anaheim, Calif., according to a Gazette article. The Plumbs’ sons – A.H. Plumb of Emporia and Preston B. Plumb of Pasadena – added $20,000 to be used to remodel the building. The deed came with a stipulation that the property be used to house women. By the time the home for women opened, 540 people had signed on as charter members of the Y.W.C.A.

The transfer to the national organization was termed an “outgrowth” of the business girls’ Bible class organized a few years earlier by a “Mrs. Scoville, wife of an evangelist,” a Feb. 19, 1938, Gazette article reported. “This class also is the parent of the Business and Professional Women’s club here.”

For years, the home provided secure housing at attractive rates for working women, students, and disabled women who were self-sufficient and able to work. As time passed, building use expanded to include space for meetings, dances, and parties for a long list of area organizations. Soon, the property had become a hub for activities in the community.

A Gazette story on Oct. 9, 1947, announced that the Y.W.C.A. planned to expand its services to the public, in addition to being a home and recreational area for women. Plans included a nursery where “small children will be cared for while their mothers shop or attend meetings.” A class would be offered to train young girls to work as babysitters, and a public restroom would be added for convenience. Already, 35 organizations were using the Y.W.C.A. facilities monthly.

The basement recreation room was equipped with a record player and soft-drink vending machine that often was used for teenaged parties. The third floor had been converted for use by Senior Girl Scouts, who redecorated the area.

Building use remained true to its original purpose, with 26 rooms dedicated as apartments for single women.

On May 31, 1948, The Gazette reported that Mrs. C.J. McCoy, head of the Y.W.C.A. executive board, had called a meeting with a group made up of organizations that had used the building as a recreation center and meeting place. The group wanted to designate the building as the Emporia Community Center.

However, many at the meeting objected and spoke in favor of retaining the Y.W.C.A. connection. Superintendent of Schools W.M. Richards accused the town of “having fallen down in supporting the YW.C.A.” The group had been unable to secure an authorized Y.W.C.A. secretary, however, and that had complicated the question. Others pointed out that the board had spent several years unsuccessfully trying to gather the $3,000 to $4,000 needed to finance the program annually, even though the Y.W.C.A. did receive money from the yearly Community Chest drive.

By the end of the meeting, the name change had been approved and the home’s mission continued uninterrupted. A Feb. 5, 1949, Gazette story announced plans for an open house to showcase improvements that had been made.

“Despite cold and snowy weather, the Lyon County Community Center is being used to capacity, an indication that the center is filling a need and growing in popularity,” the story stated.

Six months after the open house, a group of Emporians challenged the legal status of the Community Center when 12 residents filed a petition in Lyon County District Court asking that the property be sold at public auction.

The petition was based on the terms of the original deed to the property, according to an article in the Nov. 30, 1949, Gazette.

“The deed provided that ‘if this property shall at any time cease to be used by the Y.W.C.A., the upon application of 10 or more real property holders, the judge of the district court may order the property sold and the proceeds of said sale used for the benefit of the women and girls of Emporia,” the article explained.

The proposed sale appeared to be connected to the Lyon County Commission’s desire to purchase the property, tear down the home, and build a new courthouse on the site, The Gazette reported in a Dec. 1, 1949, article.

The property, if acquired, would be a major portion of the land required for what was termed “Scheme B” of options developed by Harland Bartholomew and Associates, a Kansas City planning firm that had prepared several suggested sites for the new courthouse. Scheme B would use three-fourths of the entire block for building and adequate parking space.