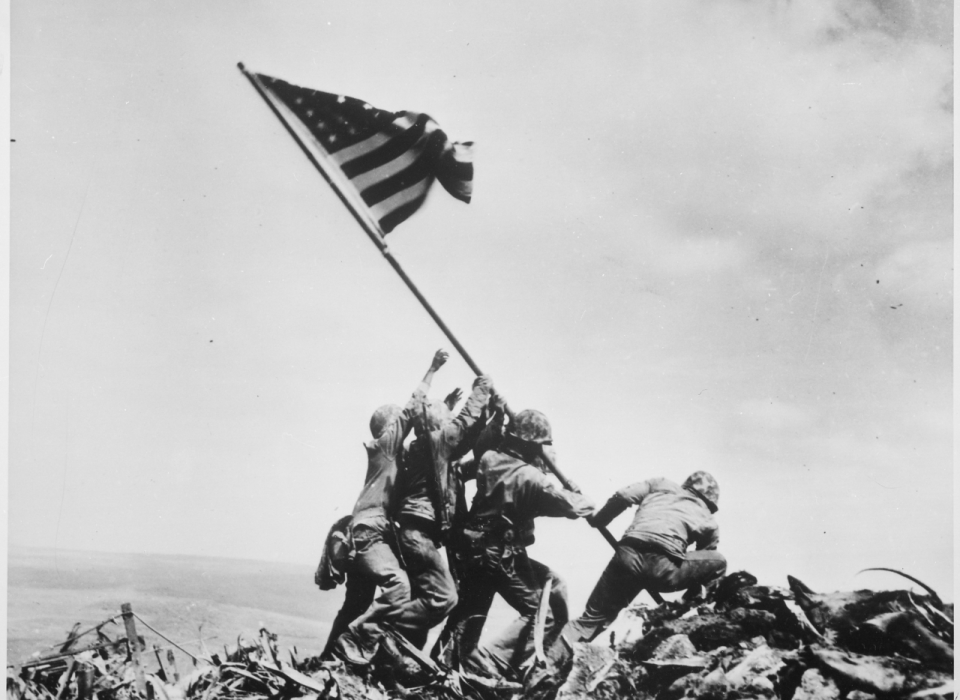 US Marines raise a second flag atop Mount Suribachi on Iwo Jima, February 23, 1945. 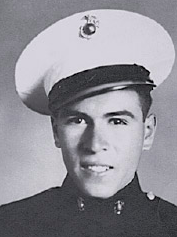 The US aircraft carrier Bunker Hill burns after being hit by two kamikaze planes within 30 seconds during the Battle of Okinawa, May 11, 1945.

US Marines raise a second flag atop Mount Suribachi on Iwo Jima, February 23, 1945.

The US aircraft carrier Bunker Hill burns after being hit by two kamikaze planes within 30 seconds during the Battle of Okinawa, May 11, 1945.

Editor's note: This is part one in a two-part series written by local historians Jan Huston and Loren Pennington detailing the experiences of two Emporians, Ambrose Lopez and Edward Spielbusch, during the Battle of Iwo Jima in World War II. The interviews were conducted by Loren Pennington, Emporia State University Emeritus Professor of History, in 2006. These interviews are available for perusal at the Lyon County History Center.

Imagine the island riddled with caves, miles of tunnels, and hundreds of pillboxes and bunkers armed with artillery all carefully situated in advance by the enemy.

Imagine Marines trudging onto beaches of soft, brownish volcanic ash where it was difficult to obtain sturdy footing or tread for man or machine.

Imagine the enemy general realistic in the knowledge that he could expect no help from the fleet, nor from his navy or army air forces. His men would hold on to the last man, each pledging to “kill ten of the enemy before dying.”

Imagine the total strength of the enemy to be 21,000 men armed with over 361 artillery pieces, 65 mortars, 33 large naval guns, and nearly 100 large caliber antiaircraft guns all aimed at Marines dumped onto the beaches on February 19, 1945.

This was Imo Jima.

Onto this beach two young men from Emporia found themselves in the second wave unloaded amidst hundreds of dead marines whose bodies had not yet been picked up.

Ambrose Lopez and Ed Spielbusch both felt they were walking into a death trap. Wrecked tanks, artillery and dead Japanese soldiers surrounded them. Lopez said he couldn’t see any Japs. He could hear them at night, but he couldn’t see them; however, snipers might pick off anyone at any time.

Both men had been employed in previous battles.

Lopez had been at Guam as part of a mop up crew after that island had been secured. His 1st battalion, B Company, 9th Regiment of the Third Marine Division patrolled Guam from August to November of 1944, sweeping from the south edge all the way to the north end. He saw lots of dead enemy soldiers while on these patrols but never saw any alive as they kept moving. He didn’t feel any animosity or hatred toward them as they hadn’t done anything to him yet.

He just had a job to do as part of a machine gun platoon. There were six men, six guns, six squads. Lopez was the number two gunner, another guy was number one, and the other four in his squad were ammunition carriers. They all followed their corporal who was their squad leader. Wherever he went, they followed.

Spielbusch’s previous experience had first been on Guadalcanal. Again he was not part of the initial landing, but his group was involved in a few skirmishes. The Japs were still bombing every night, bombing the airfield and the field dumps. While there his group was training for Bougainville, another island in the Solomon Islands. In that battle his 3rd Marine Division went in on the first wave. This was a battle of Banzai charges with Japanese coming right at them.

They had heavy mortar fire and a lot of rifle fire and artillery. Like Lopez, Spielbusch felt no hatred for the Japanese.

“They were as scared as we were. They were just kids," he said.

Spielbusch admitted that he was scared all the time, in fact, he was almost killed numerous times. Bullets whizzed by his head and he knew it was close, but he didn’t get wounded at Bougainville. He felt the Banzai attacks were not very organized, that the strategy of just throwing men at them didn’t work.

The Marines were defending a big ridge, but the Japs couldn’t succeed in getting to them. They had mortar fire and artillery, but they eventually began the Banzai charges where a big group would just get together and charge. All they did was make a very good target, easy to defend against, he said.

After 60 days on Bougainville, his group was sent to Guam where they met “a hellish defense” he said of the Japanese readiness. This fighting was entirely different than that at Bougainville. On Guam, the enemy was all dug in in caves and pill boxes and so forth. Fighting was heavy, but luckily Spielbusch again managed to avoid being wounded. He did see lots of his buddies killed on Guam. Spielbusch had been a corporal up to this point, but he was promoted to sergeant before going on to Iwo Jima. As sergeant, he was given two squads and machine guns. He had four guns, a light and a water-cooled gun for each squad.

The experiences of these two men on Iwo Jima were very different. Lopez said his company didn’t run into any Japanese opposition upon landing. Nobody was shooting at them, other than the mortars. Making their way up the beach was treacherous because running in the volcanic ash was so difficult. Walking was hard, but running was almost impossible. And they all carried heavy packs. They made little headway their first day. The first night they were there the Japanese fired screaming mimis from where they had outposts on Mount Suribachi, the highest elevation on the island. These would land near where Lopez was, and one covered him with the volcanic ash. These landed close, but they didn’t hurt anybody in his company.

Mount Suribachi was maybe a mile or two away from where they were posted. The worst part was lying in the ash at night. It was black and dirty and very hot, almost burning the part of his body lying on the ash while the other side of his body felt cool. Lopez said every night in their foxholes was hot. Each night they’d dig another foxhole, about three or four feet deep, and they’d sweat because the ash felt so hot. There were always two men to a foxhole. The two gunners were in one foxhole, two ammunition carriers were in each of the other two holes.

Spielbusch’s experience differed in that his group was tied down for a couple or three hours on the beach by incoming fire before they began to make headway toward the closest airfield about half a mile away. That night they holed up in shell holes, hot and uncomfortable, where they set up defense. The next morning they set out across the airstrip with the support of six tanks. Within ten minutes all six tanks were knocked out. Spielbusch and his men spent the whole day infiltrating down the airstrip on foot. His machine guns were supposed to follow the third platoon of the company. They hardly ever saw a Jap, but there was lots of sniper fire that they could never tell where it had originated from. By the evening of the fourth day of the battle, they had secured this airstrip.