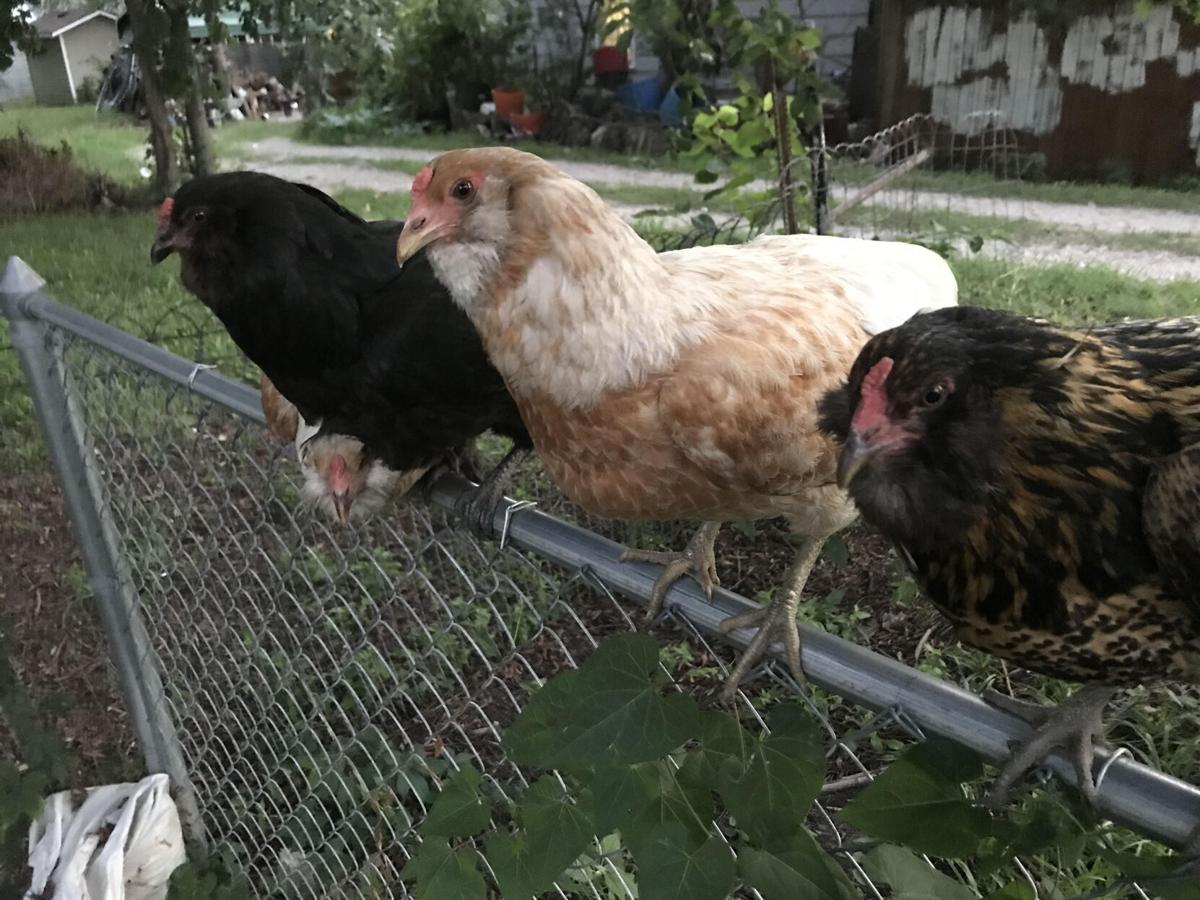 Jesse Murphy’s four chickens have become family pets. He said the family would be devastated if they had to surrender them. 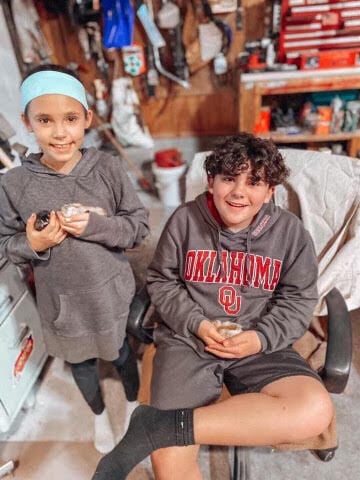 Cosette and Liam Murphy hold their baby chicks the day they brought them home earlier this year.

Jesse Murphy’s four chickens have become family pets. He said the family would be devastated if they had to surrender them.

Cosette and Liam Murphy hold their baby chicks the day they brought them home earlier this year.

Shortly after Easter, Jesse Murphy’s family called him from a farm supply store and asked to bring home two small chicks. After considering it could teach his children a valuable life lesson and provide a steady supply of fresh eggs, he gave them the go-ahead.

When the children came home with four chickens, instead of the two discussed on the phone, he still took it in stride. He helped his son and daughter raise the birds and the family set up a coop in his backyard when they were ready to be moved outside. They named the birds and considered them pets and part of the family.

“It’s nice to have them and I think fresh eggs are way better than store bought,” Murphy said. “We consider them pets and they are really part of the family.”

The problem was, as city attorney Christina Montgomery confirmed on Thursday, chickens are not allowed in city limits, following a moratorium on the issuance of permits enacted by the commission in 2012. A letter was issued to Murphy and his landlord that the yardbirds had run afoul of city policy and had to go.

“It’s a little bit complicated, but the long and short of it is they are currently not allowed in the city and the commission would have to take action to allow that,” Montgomery said.

It was heartbreaking news for Murphy’s children, who have come to love the animals, so he decided to approach the commission during public comments at the Sept. 1 meeting and asked them to consider changing the ordinance. He also asked for a reprieve from having to relinquish the birds while officials consider his case, which was granted.

“They said nobody is going to come get them for now, just be patient,” Murphy said.

During the meeting, Murphy asked the city to consider an ordinance that mirrors that of Longmont, Colo. Regulations there limit the number of hens to four and residents are required to provide food, water and suitable dwelling for the birds and the size of the coup is limited and subject to setback requirements.

Slaughtering the birds in Longmont city limits is not allowed and roosters are expressly prohibited. A yearly permit is required and costs $30.

Mayor Rob Gilligan said on Thursday he would refrain from taking a stance until more information is available, which city staff is in the process of gathering.

“I believe that our city staff are looking at our current rules and regulations and researching what other communities have in place to present some information to the commission at a future study session,” Gilligan said.

Vice Mayor Becky Smith, however, said she was open to allowing the birds in city limits with proper restrictions in place.

“I am open to chickens in the city limits,” Smith said. “I really appreciated Jesse bringing policies from other towns and it really does narrow the scope to where we could keep control of the chickens by adding this animal into existing policy. I would like to revisit it and put a policy in place that can meet in the middle for everyone.”

When the issue last came up for discussion in Oct. 2014 at a commission meeting, Commissioner Danny Giefer was in support of allowing chickens and said Thursday he was still open to discussion.

He said there are already a number of birds in town and with enforcement of existing policy falling by the wayside, a conversation needs to happen.

“Right now, I think you would have to be blind to say there were not already quite a few chickens in Emporia,” Giefer said. “And the enforcement is tough, being we don’t really have any enforcement on it. We just need to address it.”

Commissioner Susan Brinkman said she too was in favor of revisiting the issue, as it has been nearly a decade since the city last took it up. During that time, she said, many Kansas communities have changed their stance to allow chickens.

“I would be completely in favor of us taking another look at what we have in the books,” Brinkman said. “Anytime we have a group of citizens who approach us about looking at a policy or statute ,it seems worthwhile that we should probably do so.”

Jon Geitz was mayor when the issue was discussed in 2014 and is now commissioner. He said he would withhold taking a stance until more information was had. In the past, while many residents were in favor of allowing chickens, a greater number were opposed.

Many did not want to live next to a property where chickens were present, Geitz said. Looking at The Gazette comment section for the 2014 article, others were concerned about roosters and potential illegal bird fighting, as well as smell, noise and irresponsible owners.

However, for Murphy, it’s a case where a “few bad apples ruined it” and responsible owners should be given another chance.

“As long as they are kept responsibly and are not considered a nuisance, I really didn’t see what the problem would be,” Murphy said.

“Anytime we have a group of citizens who approach us about looking at a policy or statute it seems worthwhile that we should probably do so.”

Oh, chickens would be lovely!

Let’s start with these comments. 1 mites and lice chickens are treated for it. Smell there is no smell of taken care of right. Keeping hen house clean you get little to zero smell. The cackling is a cute sound and doesn’t last very long. I for one love it. Doesn’t bother me. But I’m not a nit picking Karen either. Chickens eat all bugs that is nice to have around. Fresh eggs are way better for you then them store bought eggs. And seriously don’t let a few bad eggs ruin it for others. I personally wouldn’t mind anything to do with chickens. They are great animals period. And my last comment if you gonna have a law and want to enforce it then you better get out there and take all the chickens around emporia. Because if you’re gonna take one persons chickens; then you better take them all because I have seen them all over. I feel a limit amount of chickens should be ok. You should be more worried about all the strays of dogs and cats running around of emporia. That’s worse then any one having chickens. That’s a bigger problem for emporia I’m boarding a German shepherd as I speak. Till a good home is found. Anyhow good luck I hope everyone gets to keep their chickens. Laws can be changed. And so are rules. Being uptight gives you makes you age faster. Relax

City Commission: Don't open that can of worms again. Anyone who has been around chickens know that they are filthy animals. They can have mites, lice, and then there is the ammonia oder from the manure. Also, when they lay eggs, they usually cackle. Also, if they are allowed, we will be back to having basements full of fighting chickens like before.

Now would be a good time to teach children one of life's lessons. Rules are rules and laws are laws.

Well it’s a dumb law to begin with. And laws can made to be changed. And I’m one that is not bothered by them. And they make great pets and their eggs are so good and better for you then them store bought eggs. Y’all are so dramatic it’s makes me laugh

I guess it's not possible to do one thing, just one simple thing like allow a limited number of hens in the city limits. So many take advantage of that and yes, said can of worms opens up and out they crawl to irritate us all. I don't mind the cackling since it's only for a short time each day. After all, laying an egg is quite a feat. But those who take advantage are worms too.

For one they are not filthy animals. And there already chickens all over emporia. And when looking around looks like they well kept. If chickens are well kept and there roost and hen house is clean they do not smell. No smell at all. And they eat all the bugs and that’s nice to have. For the lice and mites if we’ll kept and meds are giving right they do not get them. And for ur info dogs and cats can get those too. I for one love the cackle they make. And it’s not even that laud. And fresh eggs are better for you then them store bought ones.