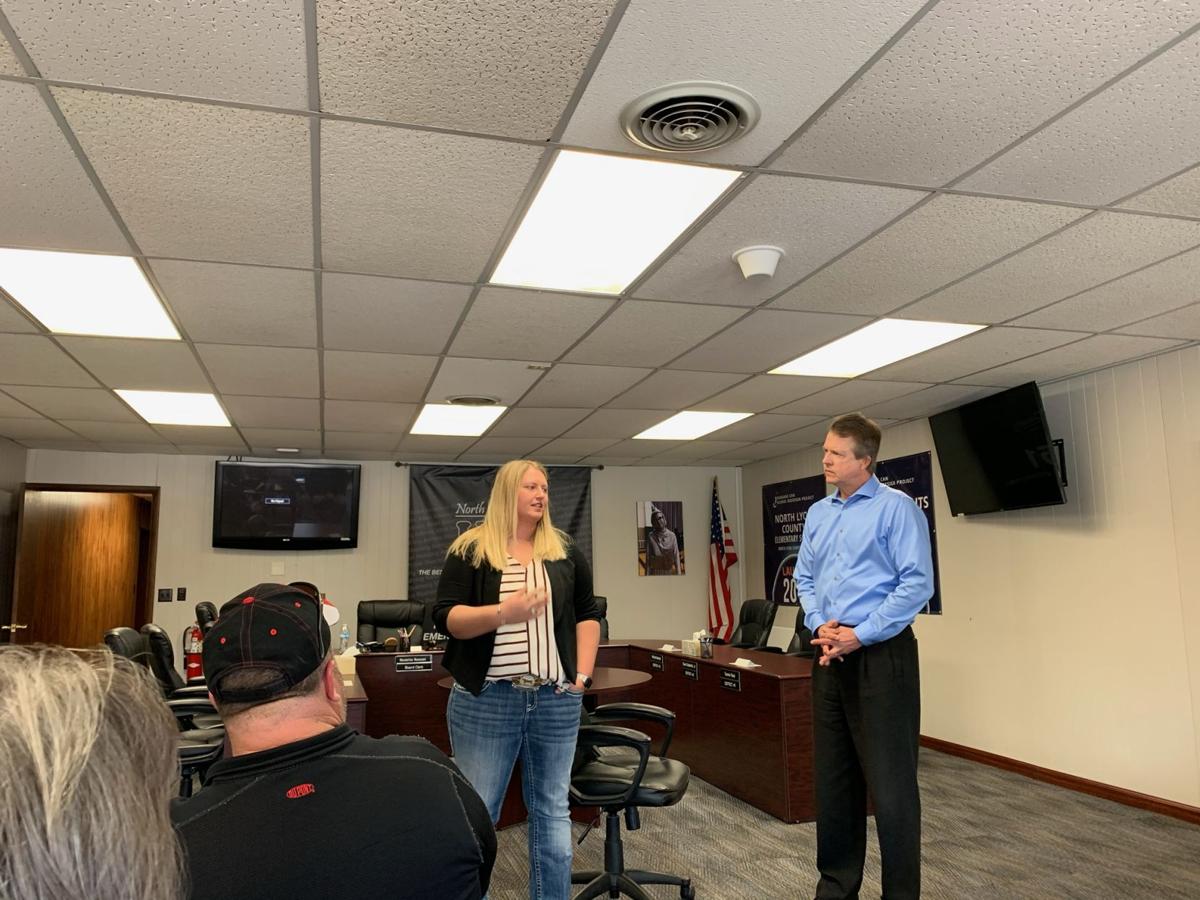 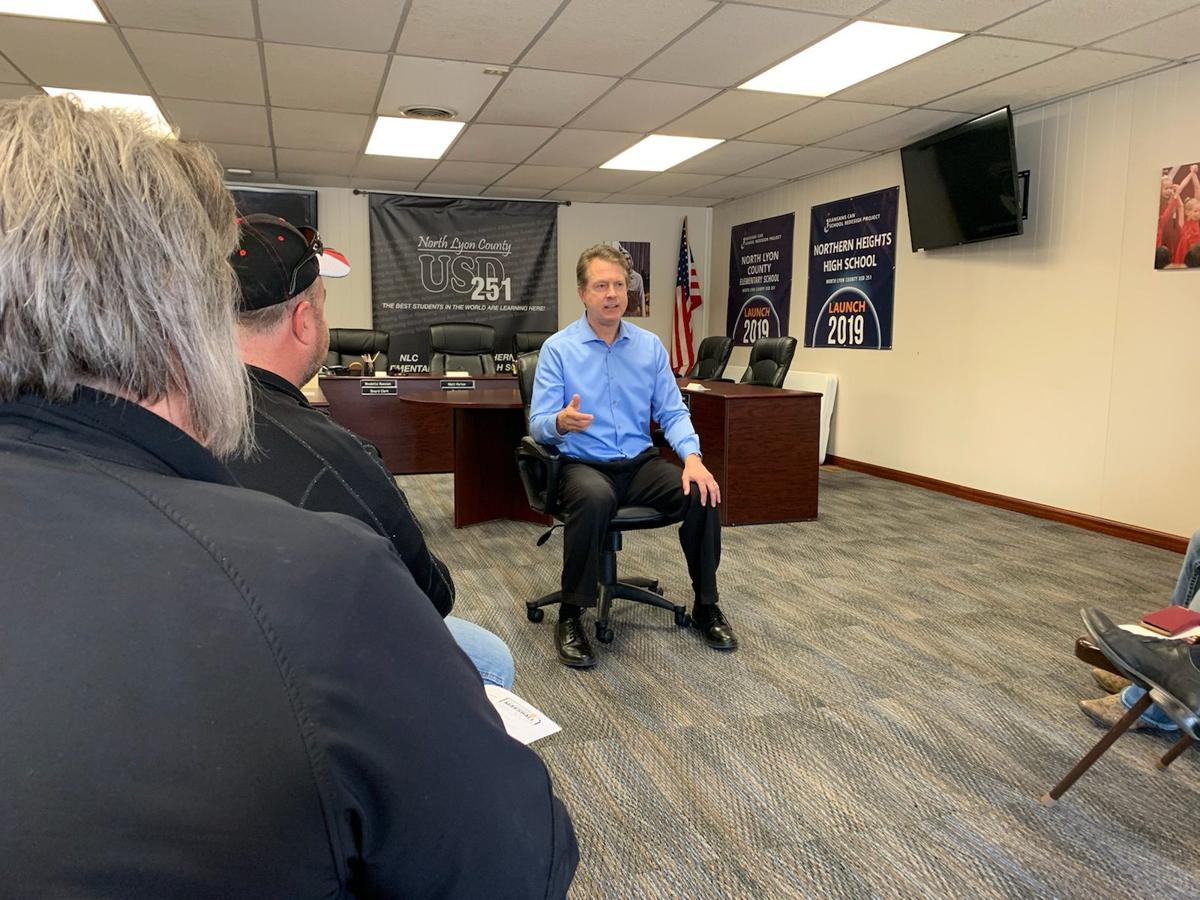 US Representative and 2020 Senate candidate Roger Marshall speaks Saturday at the USD 251 Board of Education meeting room in Americus. 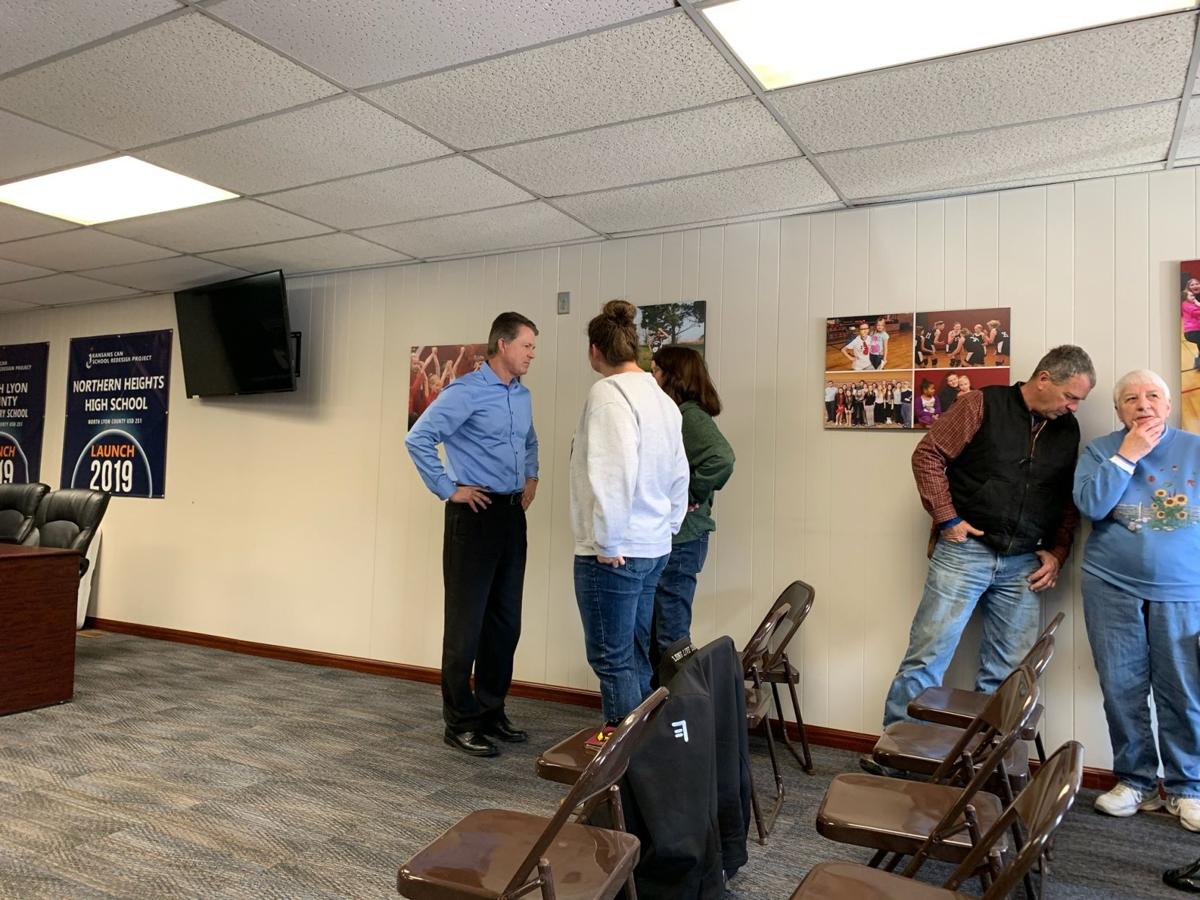 US Rep. and Senate hopeful Roger Marshall speaks with constituents on March 7 in Americus.

US Representative and 2020 Senate candidate Roger Marshall speaks Saturday at the USD 251 Board of Education meeting room in Americus.

US Rep. and Senate hopeful Roger Marshall speaks with constituents on March 7 in Americus.

Roger Marshall asked local agriculture producers for their votes Saturday during a campaign stop in Americus.

Marshall — currently in his second term as the US Representative from Kansas’ First District — is running for Senate in the 2020 election. He is vying for the seat being vacated by Pat Roberts, who is retiring at the end of this term. The first hurdle he must overcome, however, is a Republican Primary that includes former Kansas Secretary of State and gubernatorial candidate Kris Kobach and current Kansas Senate President Susan Wagle.

Traditionally, the Kansas Farm Bureau does not endorse candidates in primary elections. Marshall is hoping the work he has done for the agriculture community as a member of the US House Ag Committee will convince the KFB to go against that trend this year.

“If the wrong person wins, Kansas would be in real danger of losing this Senate seat, and Republicans could lose their majority in the Senate,” Marshall said, referring to the Primary.

Marshall said current polls show he would be likely to defeat Democratic challenger Barbara Bollier, who is currently a state Senator from Mission Hills. The numbers for his Primary opponents, he said, are within the margin of error.

He has thus far received the backing of a pair of Kansas heavyweights within the Republican Party. Long-time Senator and 1996 GOP Presidential nominee Bob Dole and former Governor Jeff Colyer have both come out in support of Marshall.

Though it wasn’t an official endorsement, Kansas Senate Vice President Jeff Longbine of Emporia expressed his approval of the job Marshall has done in Washington during Saturday’s meeting.

Longbine told the standing-room only crowd at the North Lyon County Board of Education meeting room that he first met Marshall four years ago at a Wabaunsee County Farm Bureau meeting. He said he has since developed a close relationship with the Great Bend obstetrician, and is pleased with the work he has done in Congress. Longbine was a member of the Senate when Kobach was Secretary of State and currently serves with Wagle and Bollier.

“In my opinion, there is one person who is uniquely qualified to be our next Senator, and he’s with us here today,” Longbine said.

Marshall is leaning on his accomplishments for Kansas ag producers to support his claim to the Senate seat. He said he had heavy input in writing the current Farm Bill, which was signed by President Donald Trump in Dec. 2018. He was sent to Mexico by the White House to help negotiate the new USMCA trade agreement and was also sent to the United Nations to work on trade with Japan and South Korea; respectively, the number one and two importers of US beef.

Since opening its market back up to US beef in 2017, he said exports to China have increased every year. This year, he said, China has agreed to import $1 billion worth of beef from the United States.

One area he said opening trade markets — China in particular — is going to help Kansas is in the pet food industry. Kansas currently produces about 60 percent of the pet food made in the United States.

“I grew up in agriculture,” Marshall said. “I’m the only one running for Senate who knows how to sort heifers and calves.”

Along with trade, he said one of the biggest issues he is working on in Washington in regard to agriculture is expansion of biofuels. He said small refinery exemptions — waivers for small oil and gas producers who can prove financial strife to exempt them from the Environmental Protection Agency’s Renewable Fuels Standards to blend biofuels into their gasoline — have hurt ag producers.

Touted by members of Congress such Texas Senator Ted Cruz, small refinery exemptions have increased dramatically under the Trump administration. It is one area where Marshall — a vocal supporter of Trump — doesn’t see eye-to-eye with the President. He said he has voiced his concerns to White House and believes a compromise can be reached.

“There are some areas where we have the same goals, we just have different ideas on how to get there,” Marshall said. “If we can agree on the same goals and the same objectives — and this goes for working with Democrats, as well — then I want to keep talking.”

Ultimately, Marshall said he is guided by what he refers to as his “Four Pillars:” faith, family, community and education.

“I’m running so that my kids and my grandkids can have the same shot at the American Dream as I have had,” Marshall said.

"I'm running so that my kids and my grandkids can have the same shot at the American Dream as I have had."

During a campaign stop in Americus Saturday, US Representative Roger Marshall addressed the novel coronavirus which is spreading throughout the world.

Saturday, the first confirmed case in Kansas was found in Johnson County.

Marshall, an obstetrician from Great Bend, said he has spoken with representatives from the CDC "five or six times."

"They are saying it's time to prepare, not to panic," Marshall said.

"But, I do think it's going to get worse before it gets better."

Marshall said there are two anti-viral vaccines being tested that appear to be working in fighting the virus. Those were ones developed during the ebola outbreak in 2014. He expects them to be available within a month.

The virus is particularly serious for elderly people and those with underlying health issues. He said the seasonal flu which spreads in the US annually kills about 1 in 1,000 people who get the virus, while the novel coronavirus kills about 1 in 100.

Symptoms of the virus include fever, cough and trouble breathing. The symptoms are usually mild, though more severe symptoms may include pneumonia, which can be fatal.

Federal and Kansas health officials say the best ways to prevent getting sick from the virus are to thoroughly wash your hands, cover your coughs and stay home from work or school if you are sick, according to the Kansas News Service.