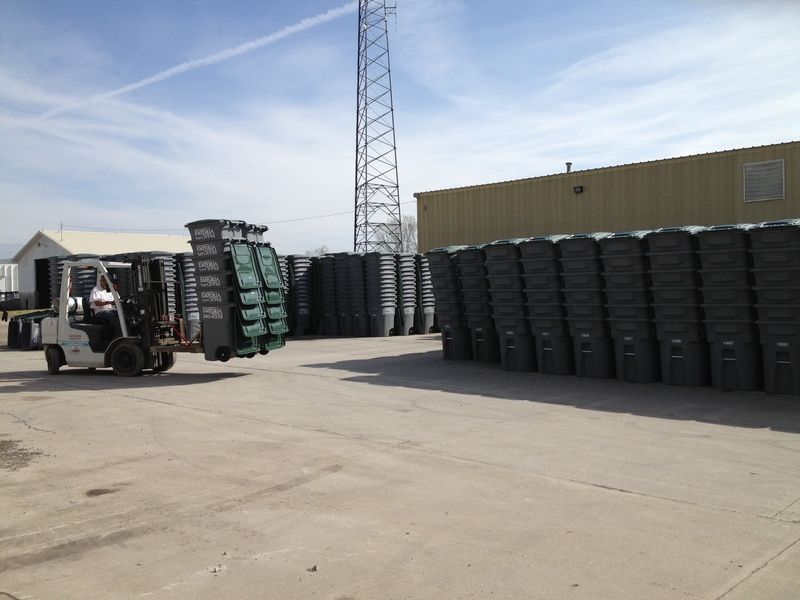 Workers assemble and stack the first 7,600 recycling polycarts delivered to Emporia residents in April 2015. The polycarts were distributed beginning May 4 of that year.

Workers assemble and stack the first 7,600 recycling polycarts delivered to Emporia residents in April 2015. The polycarts were distributed beginning May 4 of that year.

After informing the board he anticipated a recycling fee increase in late August, Public Works Director Dean Grant approached commissioners with updated numbers. Grant said the program — which is currently overseen by Perry, Kansas-based HAMM Inc. and managed by a facility in Lawrence — will begin charging the city $115 per ton, up from just $45 in 2019.

“Just to put it into perspective, the cost difference goes from about $2.82 per customer per month to about $3.80 per customer per month,” Grant said. “Our cost share will also go down to about 50% of the rebate, and we chose that over paying the higher per-ton cost because HAMM does not feel like there will be any significant payback for the next two to three years. So, just in the per-ton cost, we’ll save [more than] $16,000 by going with the cheaper per ton cost. We’ve also asked them to agree to a lower minimum tonnage, down to 1,000 tons per year.”

Grant said he had not heard from HAMM as to when a formal contract would be submitted for commissioner approval, but said he was assured that the city’s recycling fees would remain the same in the meantime.

Commissioners also reminded that the projected per-customer cost was strictly in operational terms, not the same as the city’s customer service fees for the program, which will not be increasing.

“The difference [between the new and old agreement] is about $70,000…” Grant said. “I thought that we would see [a new contract] by now, so I can only attribute that to COVID and the fact that a lot more stuff is being done remotely. As far as putting a contract together, it’s been delayed … but until we see a contract, and even after we receive a contract, we’ll get time to present it and let [city commissioners] make a decision on it before we have to worry about whether or not they’re going to go up on us.”

In other business, Convention and Visitors Bureau Advisory Board Chair Greg Jordan gave an overview of the organization’s appropriation requests for 2021 which had already been budgeted, saying leadership had, for the most part, adopted recommendations to reduce payouts by 25% in light of the pandemic. The outline included recommendations of $25,000 for Unbound Gravel (formerly the Dirty Kanza), $25,000 for the Dynamic Discs Open (formerly the Glass Blown Open), $37,500 for Emporia Main Street, $15,000 for the Granada Theatre, $5,625 for the Red Rocks State Historic Site and $7,500 for the Emporia Arts Council. No formal recommendation was made for the Dynamic Discs PDGA World Championships, which was postponed until 2022.

“The money will be there in 2021 due to carry over,” City of Emporia Finance Director Janet Harouff said. “It will be in future years that additional cuts may need to be made. Typically, the way it works is Main Street gets their allocation in January, the majority of the others get theirs in May and then the events would get it about a month before the event. The CVB gets it as tax dollars come in.”

“We made it through last year, and we certainly think we’ll make it through this year,” Jordan added.

During the meeting, city commissioners also: