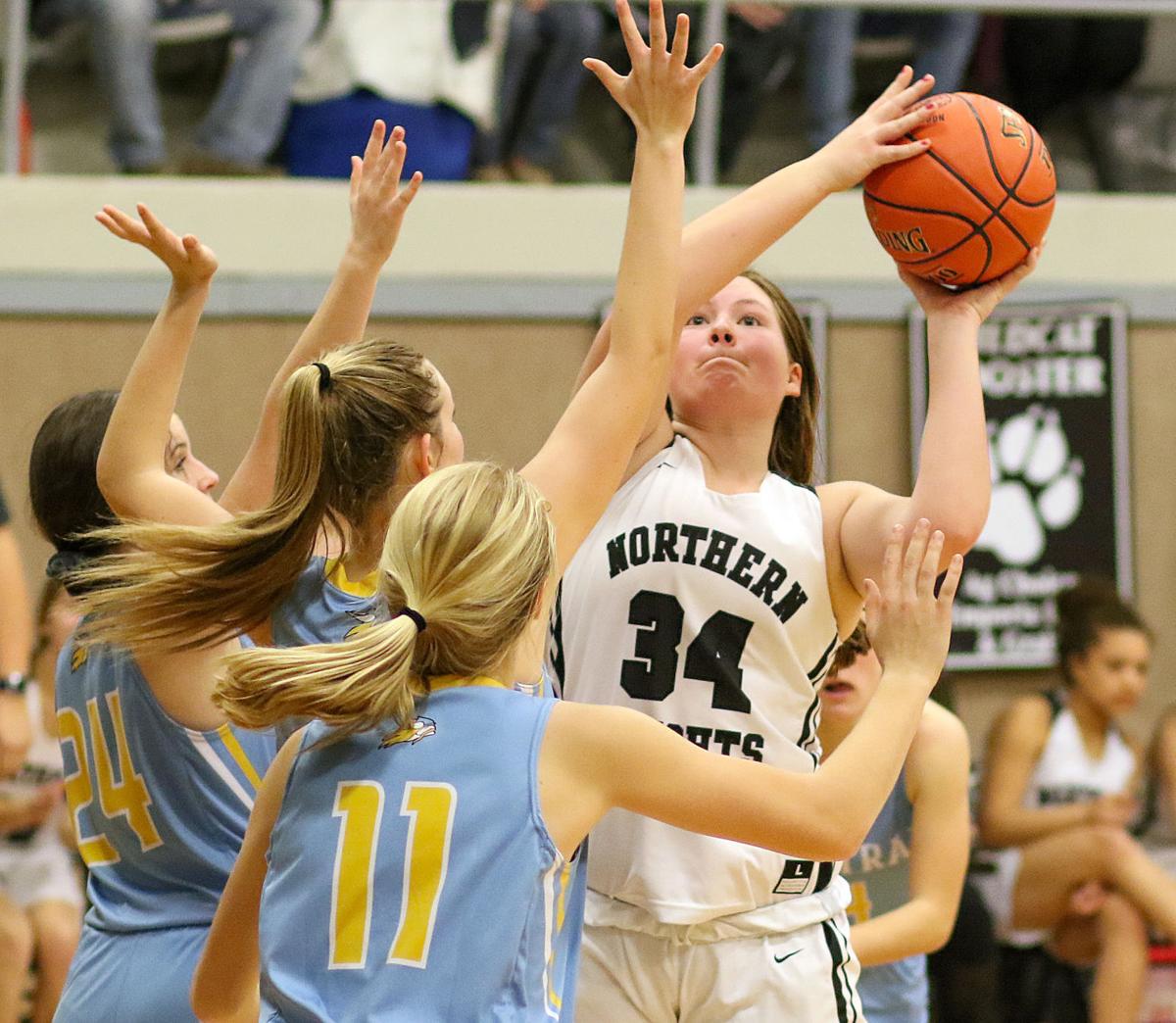 Caleigh Smart (34) looks for a shot over a trio of Central Heights defenders on Monday. 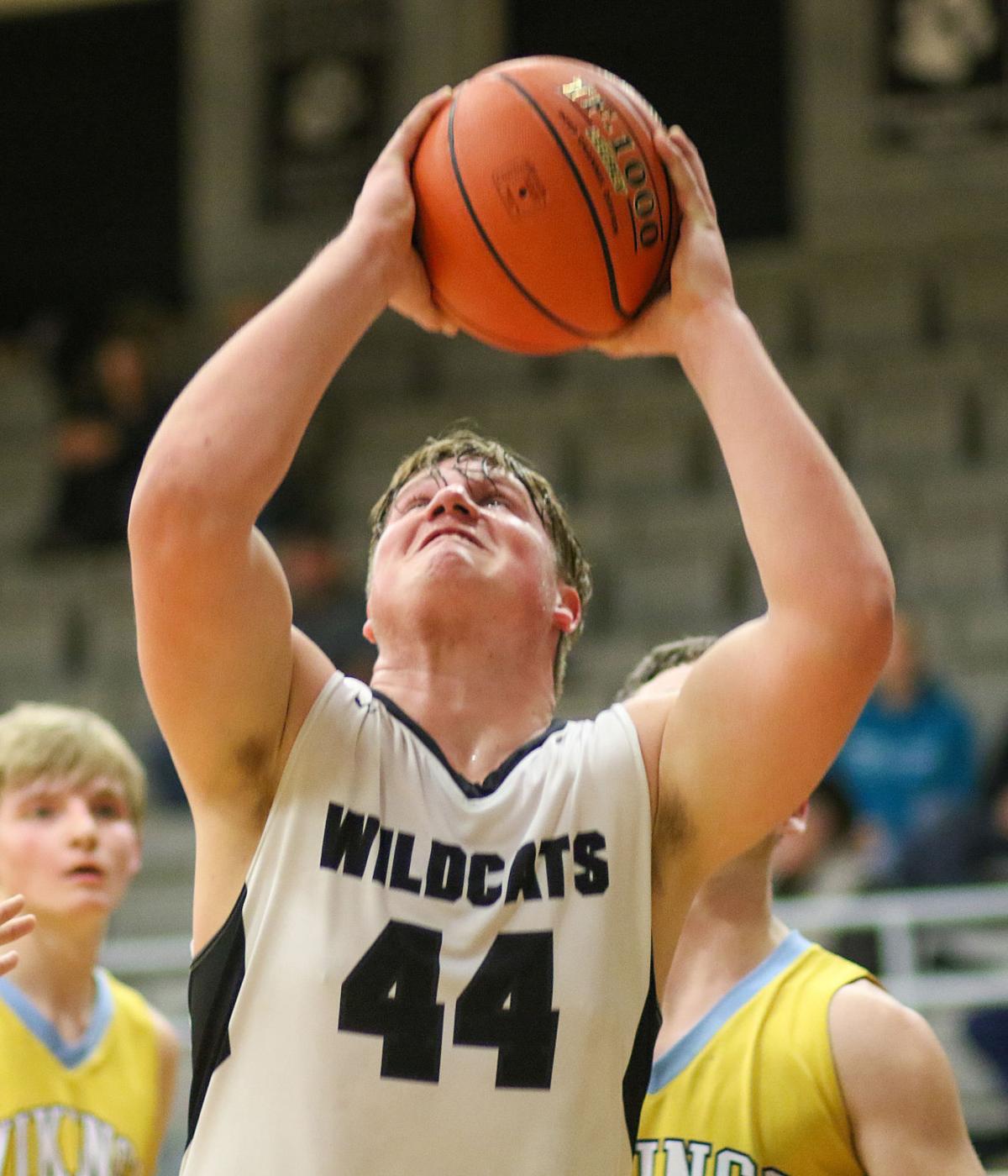 Northern Heights’ Tee Preisner (44) readies for a shot against Central Heights on Monday. Preisner scored seven points in a 55-41 win. 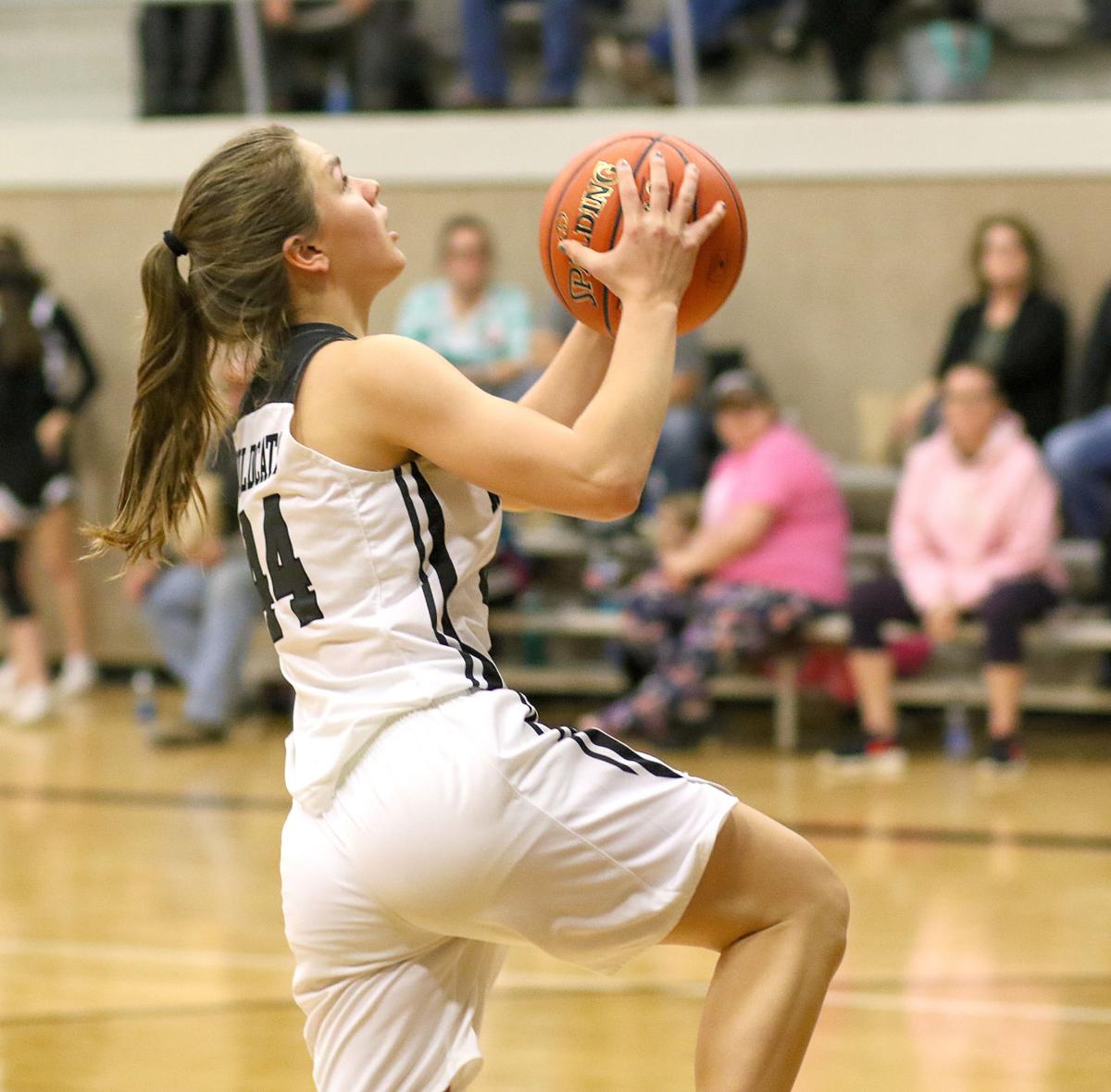 Caleigh Smart (34) looks for a shot over a trio of Central Heights defenders on Monday.

Northern Heights’ Tee Preisner (44) readies for a shot against Central Heights on Monday. Preisner scored seven points in a 55-41 win.

ALLEN — The Northern Heights girls pulled away in the second half on Monday, securing a 54-27 win in a make-up game, originally scheduled in late December.

It was just a one-point game after the opening quarter, but the Vikings’ Abby Brown scored 12 of her team-best 13 in the first to keep her team close.

She only had one free throw after that, as Northern Heights took charge from there.

“We played hard, we were aggressive on defense and just wore Central Heights out,” NHHS Head Girls Coach Lanny Massey said. “We played well for all four quarters. Brown ... had a terrific first quarter for them and was able to keep them hanging around but as the night went we were able to limit her opportunities and just pull away.”

Khylee Massey and Aubrey Hinrichs both reached double-digit scoring for the Wildcats.

“Aubrey ... gave us a nice game off the bench,” Coach Massey said. “We need to bring the energy we played with tonight for ... the rest of the season.”

The Northern Heights boys were locked in a tight battle far deeper into their game but still earned the ‘W’ with a 55-41 decision.

“We played a little tight early and into the second quarter,” NHHS Head Coach Jacob Lang said. “We missed a lot of good open looks close to the basket. I felt like we lacked energy on the defensive end of the floor and played hesitant on offense.”

The Wildcats held a five-point advantage after the first and just a four-point lead at halftime, but stretched the margin out in the third.

“The one thing we did in the first half was to make them play the game at our pace,” Lang said. “We didn’t let them slow the game down, which is what they want to do. We had much better energy coming out of the halftime break ... and attacked some more.

“I was really pleased with our effort and energy in the second half.”

The Wildcats will host Council Grove on Friday.

The Council Grove girls spotted the Falcons an early lead, but righted the ship quickly, earning a 48-31 victory on Monday, in a make-up game originally scheduled in December.

“(We had) another slow start ... but (we) did a pretty solid job defensively,” CGHS Head Coach Jason Shelangouski said. “The third quarter was the difference in the game as we came out firing in the second half on both ends. It had been four days since being in a gym, and ... it showed with our shooting, but the kids know where to improve, and that’s all we can ask for as coaches.”

The Braves took control after the break, taking a 14-point advantage into the final eight minutes.

Abbi Good and Liz Armstrong each had 13 points for the Braves.

The CGHS boys won in far more dominating fashion on Monday, carrying a 23-point advantage into the second quarter and scarcely looking back the rest of the way.

Jeric Heath, Kellen Marshall and Peyton Tischhauser each had five-plus points in the opening quarter to spark the blowout win. Heath finished with a game-high 17, while nine different boys scored for the Braves in the victory.