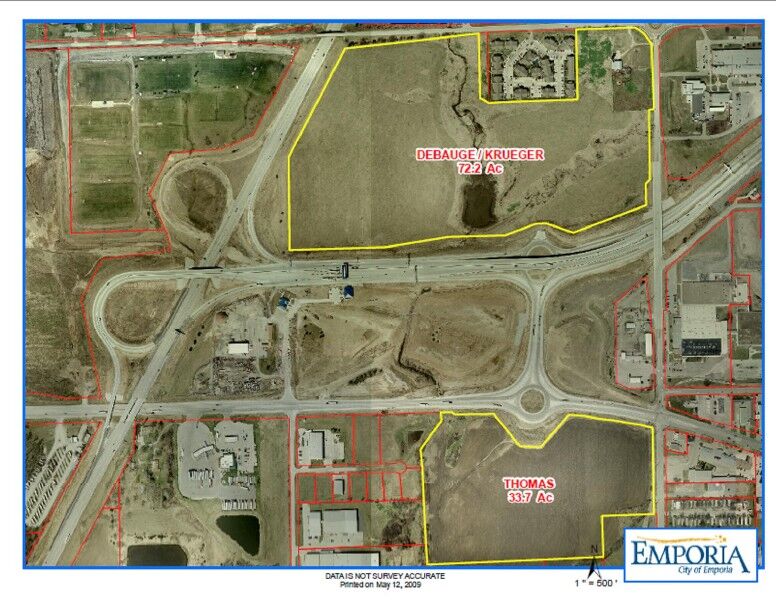 The proposed Flint Hills Crossing development will be located on a portion of the Debauge-Krueger tract near 18th Avenue and Graphic Arts Road.

The proposed Flint Hills Crossing development will be located on a portion of the Debauge-Krueger tract near 18th Avenue and Graphic Arts Road.

Known currently as the Flint Hills Crossing development, the $6.8 million project — located on a portion of the DeBauge-Krueger tract near 18th Avenue and Graphic Arts Road — will bring the construction of a QuikTrip convenience store and a new access road granting connections to Interstate 35, the Kansas Turnpike and US Highway 50.

As currently outlined, the project would take up about 10 acres of the 70-acre property tract located just west of Flint Hills Technical College. The new access road would be constructed at the first entrance to FHTC and the Jones Education Center on Graphic Arts Road, down to I-35.

“This development will bring us another opportunity to develop an area of town that’s been ripe for development there on the west side,” Commissioner Rob Gilligan said. “Obviously, our highest traffic counts come by us on the interstate through I-35 and 335. Having this development right there near the KTA will help the community, I think. It’ll draw vehicles off of the turnpike to stop in Emporia — and potentially — spend some money not only at the new development but elsewhere in town.”

Addressing confusion related to the CID, Gilligan stressed that it would not raise sales tax around the city, at large, but rather at the specific businesses involved in the development. He referenced similar scenarios with prior projects, saying CIDs had served to provide the community with improvements to multiple commercial areas.

“CIDs are tools that have been established by the state of Kansas … that allows a district that does any type of retail activity that would generate retail sales tax to petition local government — in our case the city commission — to impose additional sales tax of up to 2% … to be levied to help pay for appropriated costs for growth. This is usually going to be infrastructure type projects such as building improvements, parking lots and things like that otherwise wouldn’t be able to be funded through normal operations …

“We’ve approved two of these in the past, the first being at the Flinthills Mall. That was allowed to make improvements to the mall, and I think a lot of people probably saw that in the form of the movie theater, which was one of the big ones … The second one we approved was at the Pavilions, which is where the Hobby Lobby is. These are requested by the developers and by the organizations involved … [The Flint Hills Crossing development] application is for a 1% CID which would be on top of the normal sales tax rate. It’s 8.5% here, so in effect, you would pay a 9.5% sales tax on that property only.”

A public hearing for the project is now set for Feb. 3, during which time commissioners may approve both the related ordinance and development agreement.

In other business Wednesday, Mayor Danny Giefer delivered a traditional state of the city address. In commending residents for their resilience during the COVID-19 pandemic, Giefer said projected city budget shortcomings had — for the most part — been offset by the community’s support of local businesses.

“In mid-March, the city commission and city staff began discussions on the effects the pandemic may have on our budget and how we run the city,” Giefer said. “Staff had conversations with the Kansas League of Municipalities in Topeka, and they told us to expect a 10-20% drop in sales receipts and to be prepared for a drop in future property tax payments. Also with travel being down, they said we should expect a drop in our guest tax that we collect from visitors staying at our hotels and motels. Most cities did see these drops.

“Local retail tax was up .62% over 2019 totals. The city’s share from the county tax was up 2.9% over 2019 ... The actual figures coming from sales and property tax collections spoke greatly of the strength of our economy in Emporia. This is something for all of us to be proud of.”