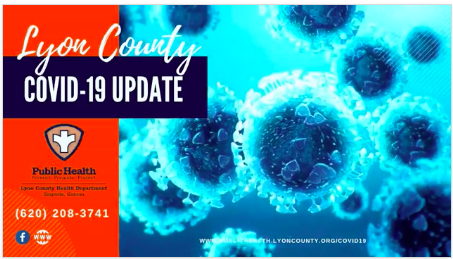 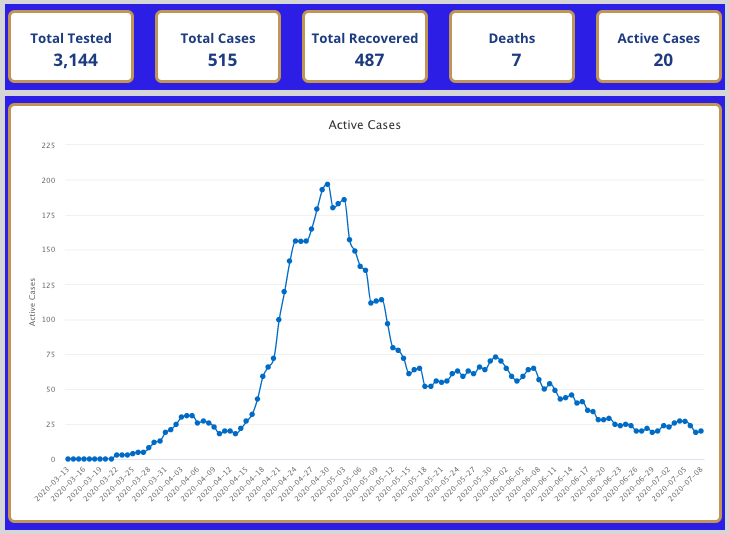 The county also added two new hospitalizations since Wednesday, bringing the total number of local inpatients to three. The condition and severity of those patients is unknown at this time.

Health officials have reported 515 total cases of the novel coronavirus since the disease first appeared in the county in March. There have been 487 overall recoveries and seven deaths.

The report comes after Lyon County Commissioners adopted a new Public Health Order Thursday morning, which again declined to make facial coverings mandatory for locals while in public spaces — though commissioners did “highly encourage” residents to wear them.

According to the Associated Press, Kansas’ top health official says most counties are not following Gov. Laura Kelly’s executive order requiring people to wear masks to help contain the spread of COVID-19, even though data is showing that masks work.

Department of Heath and Environment Secretary Norman said in a Wednesday news briefing that countries with cultural norms or government policies that support public mask-wearing have seen nine-fold decreases in mortality.

Norman cited the data from a study published in the journal Health Affairs, which he said also showed a decrease in U.S. infections between 1% and 2% daily in states that mandate masks.

Kelly, a Democrat, issued an executive order on July 2 requiring people to wear masks in public and in their workplaces because of a surge in cases. The mandate took effect at 12:01 a.m. July 3.

Counties can opt out of Kelly’s mask order under a new pandemic law that took effect in June and resulted from a compromise between Kelly and the Republican-led Legislature.

Kansas has 23 active COVID-19 clusters associated with gatherings, along with six in daycares and schools, Norman said. Clusters related to gatherings have increased by seven since Monday, which include infections at bars, parties and church services, he said.

In Lyon County, there are currently three active clusters related to COVID-19. One active cluster is related to the meatpacking industry. That cluster has resulted in 193 total cases, with three ongoing patients. Four people have died.

Two other clusters totaling 126 cases ar e attributed to private industries. Of those clusters, there are currently four active cases and one death has been reported.

Norman also said that “a lot” of virus cases have stemmed from workplaces.

“It really amazes me that people are still going to work sick knowing that they really shouldn’t,” he said.

Monday’s numbers set a new record for the worst two-week spike in reported coronavirus cases in the state since the pandemic began.

The number of infections is thought to be far higher than the official numbers indicate because many people have not been tested, and studies suggest people can be infected with the virus without feeling sick.

The state has started collecting data on the percentages of COVID-19 cases that are symptomatic and asymptomatic, Norman said.

It is absolutely un-believable to me that some folks are so self centered and selfish that they refuse to wear a mask to help protect their fellow man. I guess I am one of those individuals that was raised to respect others. I am wearing a mask every time I go out. I have a serious case of COPD, so I can't get enough air through the mask, so I have to wear my portable air machine, which I hate. But that is ok, because it is the right thing to do. In my condition, I probably wouldn't have over a 10% chance of surviving covid. If I catch it from some jackass that just wants to show off their rights, I sure am going to be pi$$ed!

But you’re wearing your mask, so you’re 65% less likely to get it, and if you social distance, you’re 90%. So make sure YOU practice personal responsibility, and you’ll be fine.👌🏼

Portable oxygen machines like an inogen don't have a good enough filter to capture covid, and wearing a mask (or any breathing restriction) with copd is hard on your body, yet you still wear one to protect your fellow human just in case you happen to have it... So thank you! The best way to protect a person like yourself is for everyone to have a mask. Anyone who is careless enough to not wear a mask is a selfish inconsiderate person. It only takes one infected person to cough near Ril, and his oxygen machine could intake that air and pump it directly to his nose. Don't be that person!

This is why we wear a mask. Not because we are told to. Because it’s the right thing to do.

Wearing a mask won't protect you! https://www.healthline.com/health/cold-flu/mask Keeping distance is the key to stopping the "virus" so please stay at least 6 feet away from me as I know the "virus" will pass through your cloth mask, and I don't want it. Also respect my freedom of choice to wear or not to wear a mask. It's just common courtesy.

"Cloth face coverings or masks can be used in public settings, such as grocery stores, where you may be in close contact with others and it’s difficult to maintain your distance.

They don’t offer the same level of protection as surgical face masks or respirators. However, when worn by the public at large, they can still help reduce the community spread of viruses. This is because they help prevent people without symptoms from transmitting viruses via their respiratory droplets".

And also from same site "One 2013 study looked at how masks could help people with the seasonal flu limit spreading it when they exhale small droplets containing the virus. Overall, researchers found masks led to a more than threefold reduction in how much virus people sprayed into the air.

Another study, analyzing data from thousands of Japanese schoolchildren, found that “vaccination and wearing a mask reduced the likelihood of developing seasonal influenza.”

Importantly, researchers also found that flu rates were lower when masks were paired with proper hand hygiene." Thanks for the link.

So basically everyone is right and everyone is wrong. It seems we can all read our personal positions in an article and use it to justify our choices. Will masks help? Yes. Should people be forced to wear them at all times? No. If you get COVID, and you’re under 40, are you likely to die? No. Should younger people try to stay away from older people or at least take precautions? Yes. Has there been a single recorded incident of a child infecting and adult? No.

Lots of conflicting info. Let’s just stop demonizing each other. If you wear a mask, you’re 65% less likely to get COVID. If you social distance as well, you’re 90%.

Masks are for the protection of others, not yourself, in case you are infected and do not know it. Yes, free viruses will pass through a mask by the millions, but in your lungs they are not free floating but rather attached to particles of moisture exiting your lungs, which masks are effective at drastically reducing. Steer clear of maskless people. Refusal to wear a mask is saying, "I might be infected and I might infect you and I might kill you but I don't care."

SnowGypsy, please respect my right to life, liberty, and pursuit of happiness and wear a mask to avoid transmitting any virus you might have to me. It's just what people who care do.

You see, when I see you out and about without your mask, I don't think, "There's a person who is exercising freedom!" I think, "There's a person who's willing to risk the health and lives of every person around them to make a political point!" The good thing about people not wearing masks during the pandemic is I now understand which people care about others, and which people just see others as a tool for their own happiness. It has made it easier to know who will still be in my social circle once this is over.

Good people wear masks, even if they are misinformed and wrongly believe they are useless against covid. Suggesting you don't want to wear one because it only protects your fellow human and not yourself is the meaning of being selfish. Selfish people don't wear masks. The vast majority of selfishness we're seeing is our Presidents supporters. Saaaad.

I actually agree with you on this. And per this great country and it’s constitution, I have the right to be selfish. And when your president, Donald Trump, gets re-elected, you will see how many people disagree with you. Keep wearing your masks because I hope your Trump Derangement Syndrome doesn’t infect ME.