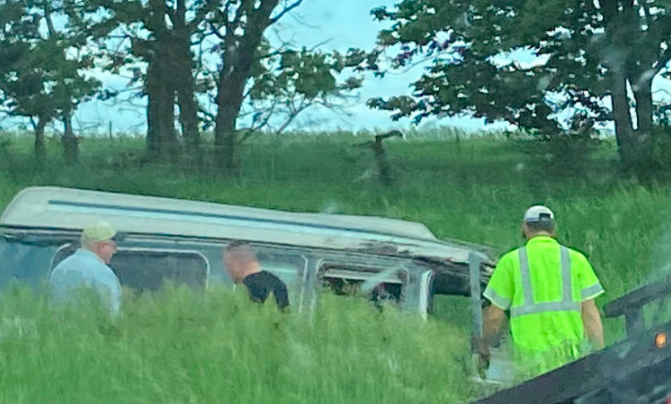 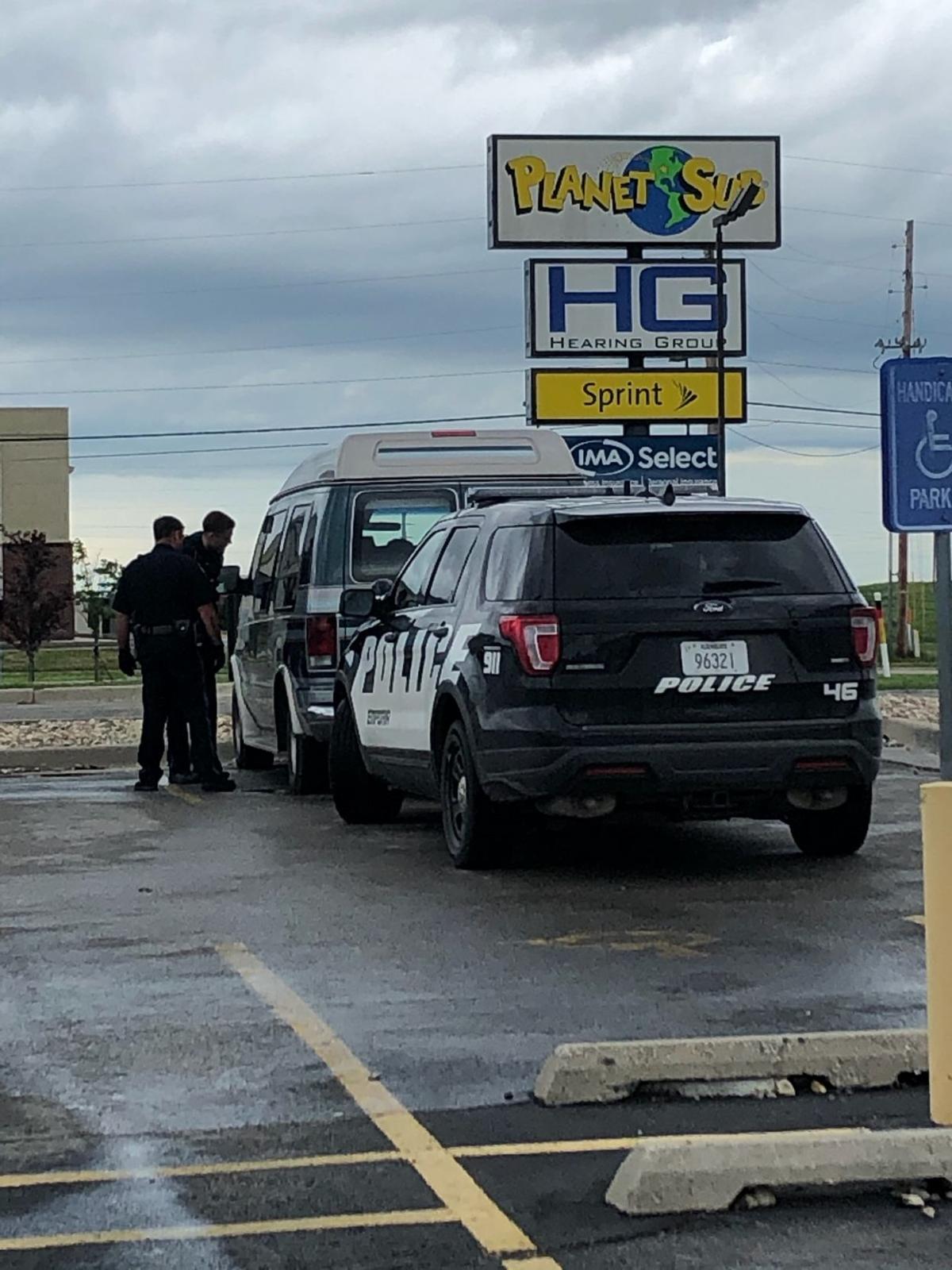 One person was arrested after a high-speed chase that began in Emporia ended in a wreck near Williamsburg Sunday afternoon.

Emporia Police Sergeant Lisa Sage told The Emporia Gazette Tuesday morning that a suspect was in custody at Lyon County Detention Center and that more details would be released later today.

Emporia Police had been seen questioning the driver of a Ford Econoline van in the Dollar Tree parking lot, 2200 Industrial Rd., early Sunday afternoon. The van has shown up in several posts on social media in recent days stating the driver has been stalking young women in the area.

The driver reportedly refused to exit the vehicle and drove away. A witness to the incident said the van “nearly hit” the police officers on scene in the process.

The chase headed northbound on Interstate 35, where the van eventually wrecked near Williamsburg.

A Monday morning phone call to the Kansas Highway Patrol

We have reached out to the Emporia Police Department for more information. If you have any information about this, or any other crime, call Lyon County Crime Stoppers at 342-2273, submit a tip on the P3 Tips app, or EPD directly by calling 343-4200.

A high-speed chase that began in Emporia ended in a wreck near Williamsburg Sunday afternoon.

Why don’t you all just wait until they come out with the results of there findings, before you make unjust assumptions. Then you can make your opinion known. It will save some of you from waiting your time with wrong Opinions.

Often, there is no "rest of the story" which is why "opinions" come into play. Maybe it depends on who the individual is as to whether there is a "rest of the story". I hope the young girls were at least questioned prior to pursuing someone like this or that complaints were filed, and I still question these the safety of these high speed chases.

SnowGypsy,,, Well said! I understand using allies, especially in your community. But the person using Aim_High, I think I know who this person is and I don’t appreciate the constant harassment to me and my opinions. So thank you for you wise and informative comment.

I use an alias (sort of) because I argue with random crazy people on here from time to time. There are creepers here who say threatening things like "I think I know who this person is" right before they accuse them of "harassment"... by the way you should probably find a dictionary and look up the meaning of the word harassment. I haven't intimidated you in any way, I've just corrected some of your information. These forums are meant for discussion... anyone is free to argue whatever they want. I also don't know you (don't ever want to either) and I highly doubt you know me being that I live 500 miles away. Have a great Memorial Day!

"Crazy" people? "Creepers"? Threatened by "I think I know who this person is"? Who needs to look up "harassment" in the dictionary (although I feel you engage in this behavior for attention)? You haven't actually "corrected" any information here, just engaged in your typical prattle.

I see you have a guilty conscience, but I swear I wasn't talking about you, lol. I was actually talking about the person I responded to... she really wants to know who I am, thinks she knows who I am, and is being a "creeper". She also accused me of harassment for disagreeing with her, lol. Me and you agree to disagree. We don't try and figure out who each other are... at least I don't!

SnowGypsy you are Absolutely Correct, you have Nailed it in describing Aim_High! I am not going to argue with this person who is too stupid to insult and who has successfully distracted my attention from my 1st comment to the Gazette regarding the 72 year old who died in jail and asking why they do not do Investigative reporting. I also was referring to a 43 year old male who died in Lying County Jail but I could not find where the Gazette released the cause of death!

My comments have been deleted prior to this and when speaking to the Gazettes editor as to why, I was told that an employee who no longer works at the Gazette probably deleted them. The Editor assured me that they would not allow my comment or opinions to be deleted or “Censored” as long as they followed the rules and guidelines. My comments that were deleted by an employee did not like the questions or comments I made. I use my real name because I want answers, I don’t live in Emporia thank God, but I have family who does. I think this small town needs a major wakeup call from the Good Ole Boy System and I will continue to ask questions until I get the truth, but I am sure it will not be from the Gazette.

I sincerely try to stay off of the Gazettes news because if it involves the Law Enforcement, Prosecutors or Judges, well in My Opinion, the Gazette needs subscribers and backers. I don’t know who owns this paper, but anyone with any common sense about running a business, needs to at least pay for itself. With this said I wonder if the Gazette gets City tax breaks or has someone of power in either Lying County or from the City to only print what they say to print because I know for a fact that Lying County and EPD are as Corrupt as Aim_High is stupid…. There now this can be Censored and removed… Peace

I seen the post on social media and wondered if the police were looking for the van. Because I'm sure concerned parents called it in, but the article only said, "The van has shown up in several posts on social media in recent days stating the driver has been stalking young women in the area." The police could not get information without asking the person, but obviously that didn't happen because they ran. Hope they find them before young girls start coming up missing. As if we don't have enough problems, Crazy , cruel world we live in.

I wonder if EPD is going to Lie and contrive a story to justify why they had to endanger others in this chase? Also I hope the person that EPD chased can receive all evidence from the Prosecutors including Body Cameras!

You sound upset this man stalking children got caught.

Aim_High.... This article did not say who EPD was chasing! How do you know he or she is child molester? The Gazette did not give names and was asking for more information. Were you there and know that this person is a rapist? Does this person have any pending charges of molesting children or is a Convicted Pedophile? Or are you just guessing? I am not upset about the Police questioning anyone as long as they are doing their job Legally and do not Violate the U.S. Constitution that they Swore to uphold.

I never said he was a child molester... I said he was stalking children. There were multiple reports about this guy, a BOLO posted, and he fled when confronted by police. I'm glad he is caught, you still seem upset about it.

Defending a child predator that even ran away when confronted on it?!? Are you a predator yourself?!

Austin Metcalf, same response as to Aim_High, were you there? And you asking me if I am a Predator shows your IQ. I am a victim of Rape as a child so you know nothing about me. EPD and Lying County has a Long history of a violating Due Process but yet it seems this Corrupt Little Town just accepts it and has a blind eye of what Justice for all means. BTW if you’re using your real name, unlike Aim_High, Kudos to you for not hiding behind a fake name.

My first thought was that the "stalking" was seen on social media, not something reported to the PD. If that is the case, and they simply pull "chatter" from social media, I would see that as a major issue, and possibly get "copycats" doing that. If something is serious, one needs to report it to the PD. Something does seem amiss. And, as far as using a real name here in Emporia, I don't as I know how vindictive people can be in some places, and this has all the "markers" for being such a place. The thing is that these days people freely use the words like stalking, child molester, etc. as these are not terms to joke about, thus making one really question if they have a clue what they are really saying. I have a lot of concern, as I have never seen it anywhere else across the country, about the "high speed" chases here. How is the justification made for endangering others versus the actual threat of the person being chased? I remember one such chase that went through town where a young man ended up dead as they claimed I believe he ran a stop sign? Either we aren't getting the full stories, or you are right on target with your thoughts concerning the possibilities.