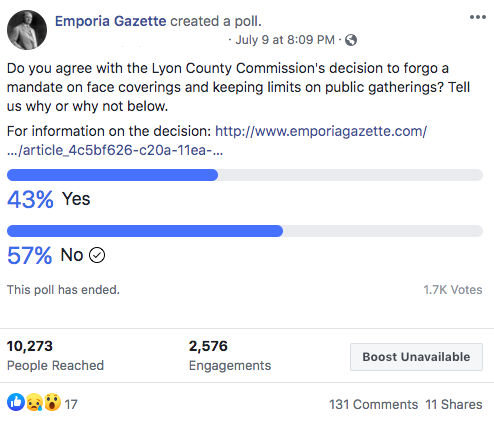 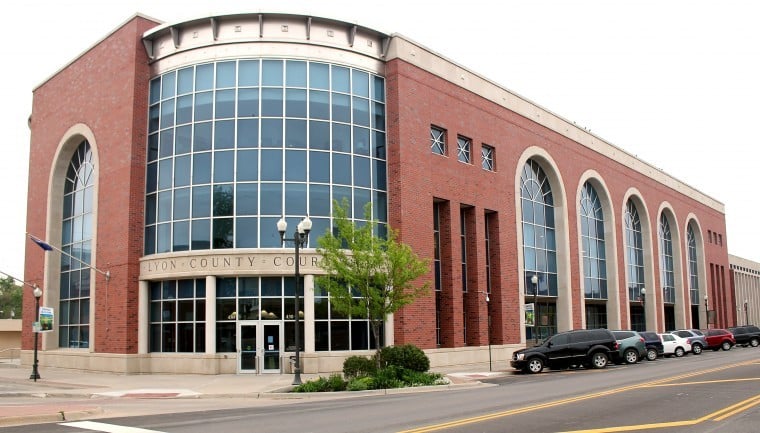 Having taken effect at midnight Friday, the new order is set to run through Sept. 18 and does not mandate masks but “highly encourages” them in situations where proper social distancing cannot be maintained.

Guidelines regarding mass gatherings remain unchanged — with the limit still set at 45 people — as does language providing recommendations on travel, high-risk individuals, proper business protocols and promoting the safety of individuals currently residing in nursing homes or other long-term care facilities. A full copy of the order is available on the county’s website at lyoncounty.org/index.

“I think we’ve in some way developed a plan that fits [the situation] and a plan that the people of Lyon County want,” said Commissioner Rollie Martin. “They want to have their own individual rights to wear a mask or not wear a mask and have the responsibility as an individual to move this community forward, move [cases] back down and to hopefully make it so schools can open in the fall. That means wearing a mask when there’s no opportunity [for social distancing], wherever that may be.”

Referencing their encouragement by the area’s recent COVID-19 trends — which included only 18 active cases as of Wednesday afternoon according to information provided by Lyon County Public Health — commissioners said they didn’t see much reason for “altering what was already working” in making a final decision.

Since the meeting, members of public health have reported 13 additional positives and 12 recoveries, setting the current number of active cases at 25. Sheriff Jeff Cope also sent out a press release Friday morning announcing two additional inmate positives at the county detention center. It is currently unknown whether the positives have been added to the overall total.

“We have to be very careful about overwhelming [Public Health’s] systems,” said Commissioner Scott Briggs. “Our numbers are great right now and I think the reason for that is about what the people have been doing. Of course there’s going to be exceptions to that. When you talk about the word ‘universal’ that means any and everybody has to wear a mask … I support the theory of universal masking, but I don’t know how that would be able to be enforced. That’s the main concern.”

“[COVID-19] is a scary deal, and it’s not something that’s going to go away immediately,” Commissioner Dan Slater added. “We’re going to have to watch it every week, especially if the numbers start going through the roof like they’ve done in Arizona and some other places. There’s a chance that maybe we’ll have to come back to it, and maybe it’s something we can look at each meeting moving forward.”

As with most news regarding the pandemic, reaction to Thursday’s announcement was met with a split of opinions on social media. In a poll posted to the Gazette’s Facebook page Thursday evening, 43 percent of users said they agreed with commissioners’ decisions. As of Friday morning, the poll had more than 1,500 individual responses.

“I see it both ways,” commented Crystal Michelle. “Freedom of choice. BUT a necessity to stop the spread!”

“We need to get immunity,” Amber Stivers offered. “This won’t happen if we stay shuttered up and in fact we’ll be more susceptible to multiple diseases. Masks don’t work and should never be mandated.”

“I don’t understand why we can’t look at other countries who have won over the pandemic and model our behavior after them,” countered Ashley May. “Masks work and it’s not forever.”

“Doctors and nurses have to wear masks for up to 12 hours or more a day,” added Haley Nuessen. “Wearing a mask inside Walmart for an hour isn’t a big deal. Just wear it.”

Regardless of community opinion, Lyon County Attorney Marc Goodman said it was “highly possible” the order would be restructured in some way during the course of its lifetime. He encouraged commissioners to see the order as a “living document” and keep updated on the latest information and recommendations from health agencies in order to promote the safest possible environment for county residents.

“A special meeting can be called at any time should the trends and tendencies reflect that the commission needs to change this order,” Goodman said. “That can be done with minimal notice. So, saying Sept. 18 [as a deadline] is not so set in stone.”

According to reports by members of the Associated Press, about four in 10 Kansans live in counties that have overruled Gov. Laura Kelly’s statewide mask order. At this point in time, more than 90 of the state’s 105 counties have opted out of the mandate, at least in some form.

“I’m not surprised,” said Dennis Kriesel, director of the Kansas Association of Local Health Departments, in an AP interview earlier this week. “I think most of the local health officers aren’t, either, at this point. The mask issue has become political.”

I have a question, how many of the COVID cases in Lyon county are from outside the city of Emporia? I'm asking out of ignorance, I have no idea. My assumption is that outside of Emporia there are few cases of COVID. IF that is the case, it may make sense to wear a mask in Emporia, but not as much sense to wear one in the rest of the county. I do worry about Emporia and ESU. If COVID gets out of control and ESU has to go to virtual learning. I can envision a mass exodus of students leaving Emporia and taking their $ with them. If I were on the city commission I would be spending my energy trying to help ESU provide a safe environment for the college students. Of course that would also protect the community from both COVID and taking yet another economic hit.

Is running a red light illegal because it's political? No, it's about protecting ourselves and our fellow humans. We may get away with it once, twice, three times, but eventually, running a red light won't go well for anyone. We have rules, laws for a reason. You can't expect all people to do the right thing. Just because it's not CONVENIENT to wear a mask, doesn't mean we shouldn't. What is it worth to save a life? Since so many can spread the disease without even knowing they HAVE it, masks are the easiest, most logical way to help. It's been shown that masks, social distancing, testing and contact tracing worked in other countries around the world. Just take a look at daily cases in countries that are SAFELY reopening because their citizens decided a little inconvenience was WORTH IT to protect themselves, others and to REOPEN their economy safely. We didn't do that. It was piecemeal at best. We are NOT acting like the UNITED States and that has been our downfall as the numbers increase. MAYBE when we reach FOUR million cases and thousands of more deaths, people will get this isn't political, but a health issue that doesn't discriminate or care what your beliefs are, what political affiliation you hold.. Kansas is lucky because we have a smaller population and, for the most part, are more spread out. But schools are getting ready to open, people will be coming in from all over to attend universities, right now, I know of people on road trips to other states, we don't live in a bubble. We aren't immune. If you don't want to wear a mask for yourself, wear it for family and friends. How would you feel if you got it, didn't know you had it, but spread it to others, who spread it to others, including someone who would be hospitalized or died, because you didn't like wearing a mask in public? .

Um, infected numbers mean nothing when death numbers are going down.... stop freaking out already

Kansas made the TOP 18 list in WH document. Maybe you should start freaking out already. We need to do what other countries have done to open successfully and safely, Wear masks, socially distance, test more and do contract tracing.

The common cold is a corona virus. Freaking the public out and restricting normal medical care is causing more harm then good. It's going to run it's course like all the others have.

My 5 year old says she is going to ask Santa to get rid of coronavirus for Christmas this year. It sounds funny, until you realize her plan is just as good as President Trumps, which amounts to letting convicted criminals serve their sentence in the safety of their own home to avoid the possibility of getting covid, while demanding this country's children return to school in the fall. Is it even possible to keep social distancing in place during an active shooter drill? Saad.

Yeah, no. It’s the liberals wanting criminals to get out of jail. The same people, conservatives, really aren’t too fond of letting prisoners out. But nice try with trying to throw shade on the President. I can’t wait to see your face when he is re-ejected for 4 more years. Lol

Nearly all Republicans wanted Stone not even to go to Jail. Republicans are Lying Criminals, most should be locked up!

From the American Academy of Pediatrics: “Although many questions remain, the preponderance of evidence indicates that children and adolescents are less likely to be symptomatic and less likely to have severe disease resulting from SARS-CoV-2 infection. In addition, children may be less likely to become infected and to spread infection.”

All across the nation, from the highest office of the Presidency to the lowliest municipal health official, so-called leaders as well as the so-called educated citizenry have proven utterly incapable of comprehending a pandemic and of following even the simplest of instructions to minimize its spread. You can see it in all the loudmouth Karens and Kens popping up all over the internet. What disgusting public displays of stupidity! You can see it in the retail store clerks being assaulted, sworn at and injured. You can see it in the countless spineless retail store managers who won't protect or even back up their own employees. You can see it in the crazy thugs waving flags and mumbling about their "rights" to refuse orders and infect and kill others. Well, I'm from Missouri so I say, Show Me where that right is written down! All of this is driven by the Chamber of Commerce, restaurant owners and many other Republicans who want our citizens to get sick and even die for their lousy dollars. Die for their profit! Our county commission now proves it is no exception. As a result the virus is running wild and setting new records every day for infecting and killing Americans. More in densely populated areas, less in sparser areas, but more get sick and more die every day nonetheless. You can see that in the numbers, the numbers of the sick, hospitalized and dead. Unlike businessmen and elected Republicans, numbers don't lie. This negligence may be the crime of the century, and the century isn't even a quarter finished.