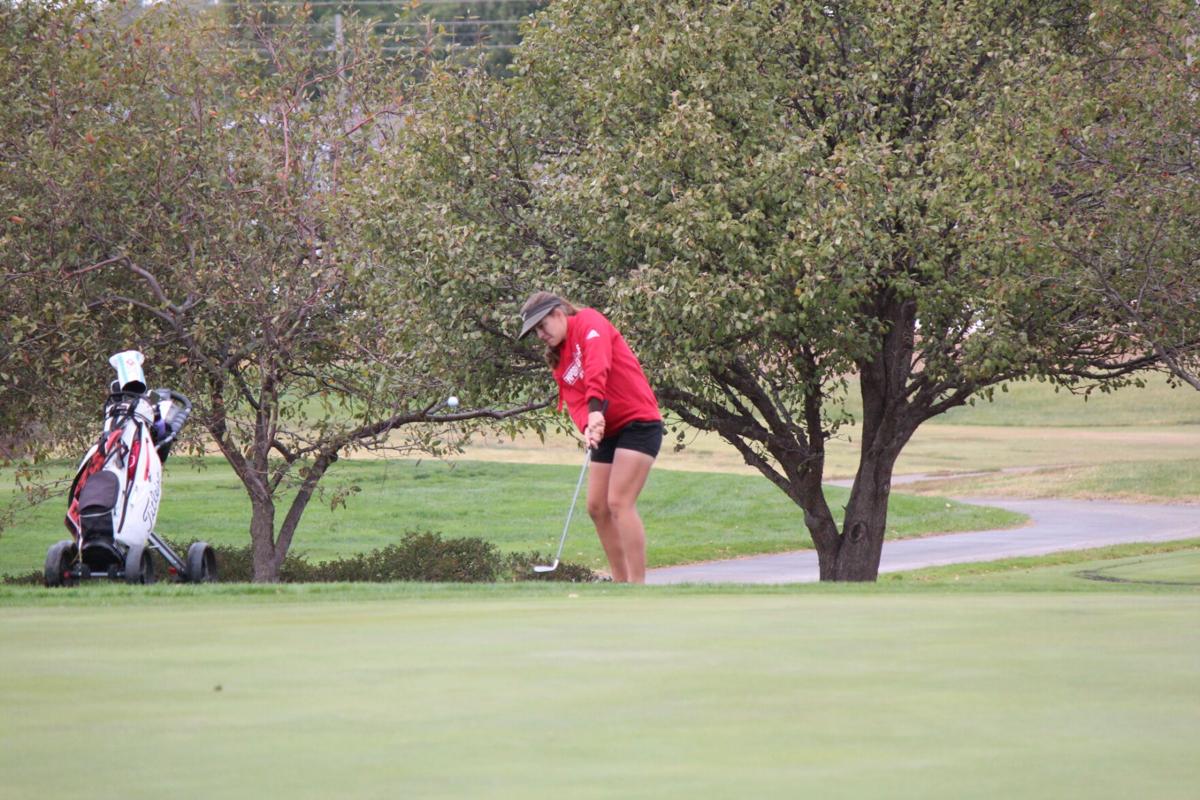 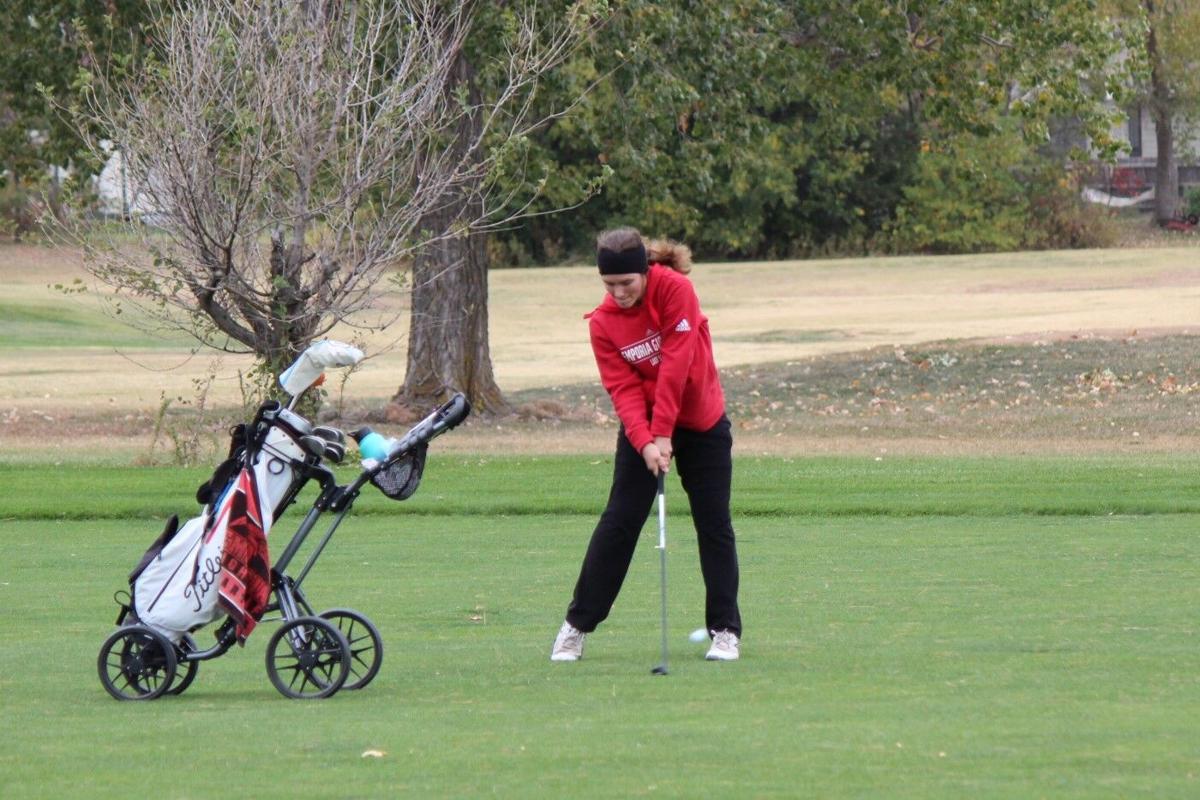 EHS sophomore Olivia Eckert hits from the fairway on the 18th hole on Oct. 19 at Salina Municipal Golf Course.

EHS sophomore Olivia Eckert hits from the fairway on the 18th hole on Oct. 19 at Salina Municipal Golf Course.

Everything at Salina Municipal Golf Course this week — it seemed — was a battle.

The field of golfers in the 5A girls state golf tournament, condensed due to COVID-19, was talented and fierce. Teeing off on the long, challenging back-nine both days, the Spartans’ representatives were dealt a difficult hand. And the greens in Salina, where Kapaun Mt. Carmel came away as team champions, were fast and difficult to read.

For two days, Olivia Eckert battled that battle. Opening play Monday with a Day 1 score of 89, the EHS sophomore settled into the tournament on Day 2, the final day of competition for the fall season, and delivered a captivating and gutsy final round score of 85.

More than just good enough to earn her a share of 25th place, Eckert’s performance was the best she’s recorded in tournament play...ever. On the biggest stage, competing with some of the best golfers in the state, she rose to the occasion.

“That’s the best score she’s ever shot in a tournament by a few shots,” head coach Rick Eckert said. “That’s what you want to see is things coming together like that.”

Olivia Eckert’s two-day score of 174 earned her that tie for 25th-place to pace the Spartans in Salina early this week. Fellow sophomore Avary Eckert was not far behind, finishing in 30th-place as Shawnee-Mill Valley’s Libby Green earned the individual state title shooting 143 over the two days. And while KMC walked away with the team title, the tournament marked a significant step for not only EHS’ two top golfers, but for the Spartans’ program as a whole moving forward.

“The entire season was about what we just went through and accomplished.” the head coach said. “This was the goal from Day 1.”

Beginning on the 10th tee both days, Olivia Eckert fought Salina Municipal’s challenging back-nine from the outset and struggled with it on Day 1. At the turn, the sophomore’s scorecard held three double-bogeys, a triple-bogey and a front-nine score of 47. Eckert salvaged the round over the final nine holes, paring four of them to keep herself in contention even as she labored on the greens, putting 42 times on the day.

On Day 2, Eckert carried over the momentum she had amassed in Monday’s final stretch and remedied her putting struggles en route not only to EHS’ top finish, but to the best tournament round of her young career. With a sharper focus and a deeper knowledge of the course than she had the day before, Eckert withstood the rigors of the lengthy, early holes and improved her efforts on the greens. With five pars on her final nine holes, she willed her way to an 85, enough for the tie of 25th-place and her personal best performance.

“Olivia had 42 putts on Day 1; she only had 37 on Tuesday,” Rick Eckert said. “That was the big thing. She hit the ball better. She putted better. And she made better decisions on the second day.”

Avary Eckert delivered a consistent tournament performance of her own, turning in back-to-back scores of 88 for a 30th-place finish to close out her successful sophomore season. Also opening her rounds on the 10th tee, she too struggled around the greens but highlighted her scorecard with a pair of midday birdies across the two rounds, recording a par-five four to finish out the front-nine on Monday, a par-four three to open her back-nine in Tuesday’s final round.

Eckert was on her way to a strong final round before Salina’s tricky bunkers got in the way. Fives times on Tuesday, Eckert found herself buried in precarious positions in the sand and those mistakes ballooned her scorecard, including her final hole score of 7 that she recorded when her second shot landed on the edge of the bunker on a slope and was hardly playable.

Nonetheless, Eckert worked through the bunkers and her struggles to another impressive EHS finish.

“Avary just couldn’t get a break,” Rick Eckert said. “She started out slow, but kept things moving forward and made the right adjustments.”

For the pair of Eckert’s this week’s state tournament performance put an exclamation point on what has been a transformative sophomore season. The Eckerts have together formed a talented duo that anchored the Spartans this fall, with each earning All-Centennial league honors. And their success in Salina, in a field of more than 60 of the state’s best golfers, only solidified the ascent that EHS’ top players are on.

Along with the leading pair, the Spartans saw promising signs from freshmen Ella Fessler and Nicole Dalton, as well as junior Faith Welborn this fall season. Together, the team recorded some of their best finishes since Eckert took over the program in 1999. With the young, talented team that will only get better in the coming seasons, there’s plenty to look forward to for EHS golf, and the state tournament efforts of Olivia and Avary Eckert only delivered further evidence.

“I just can’t tell you how bright our future is looking for next year and the next two years,” Eckert, the head coach, said. “That’s what’s exciting. If these girls continue to work as long as I have been, collectively as a group, we’ve really got a chance to move forward.”