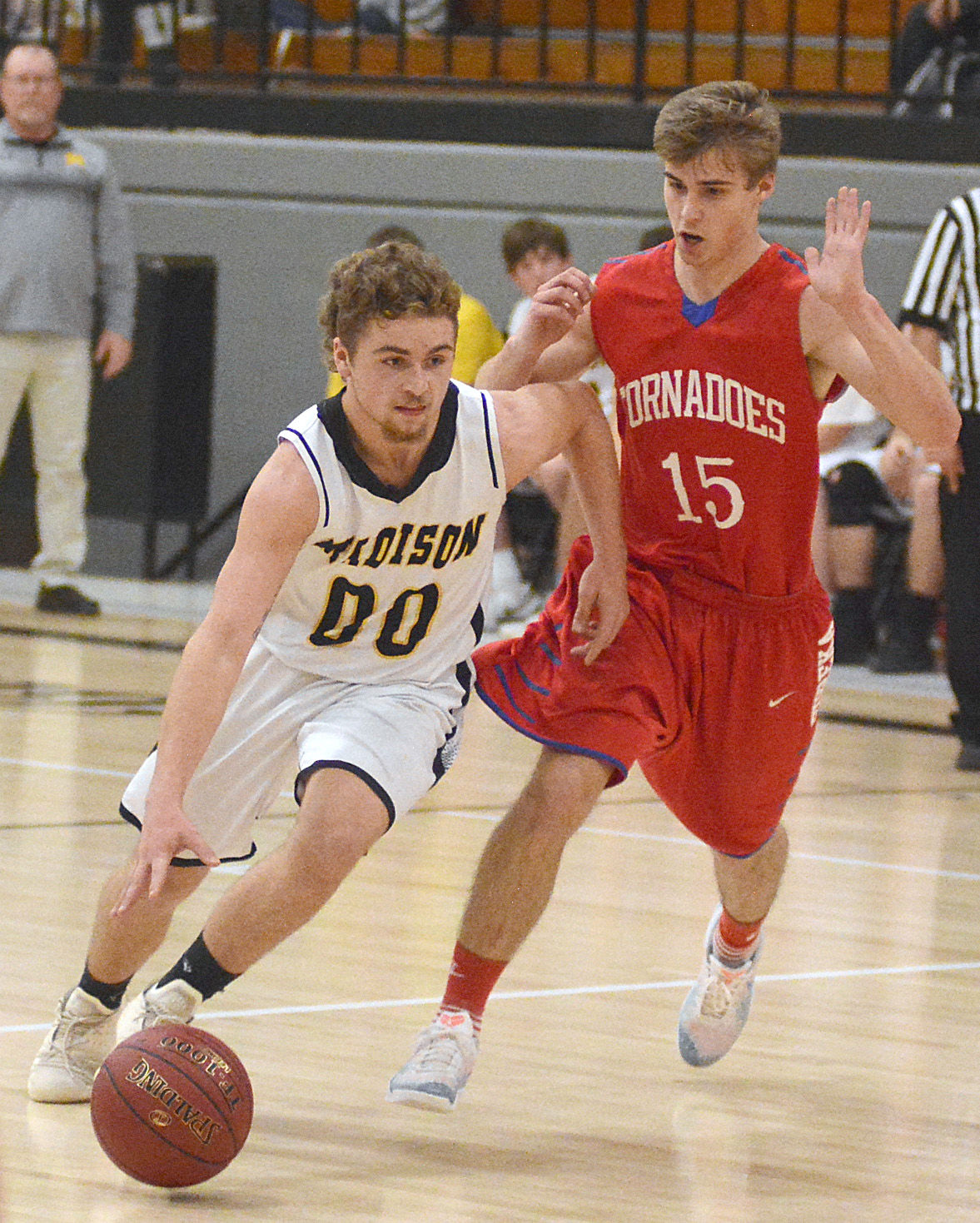 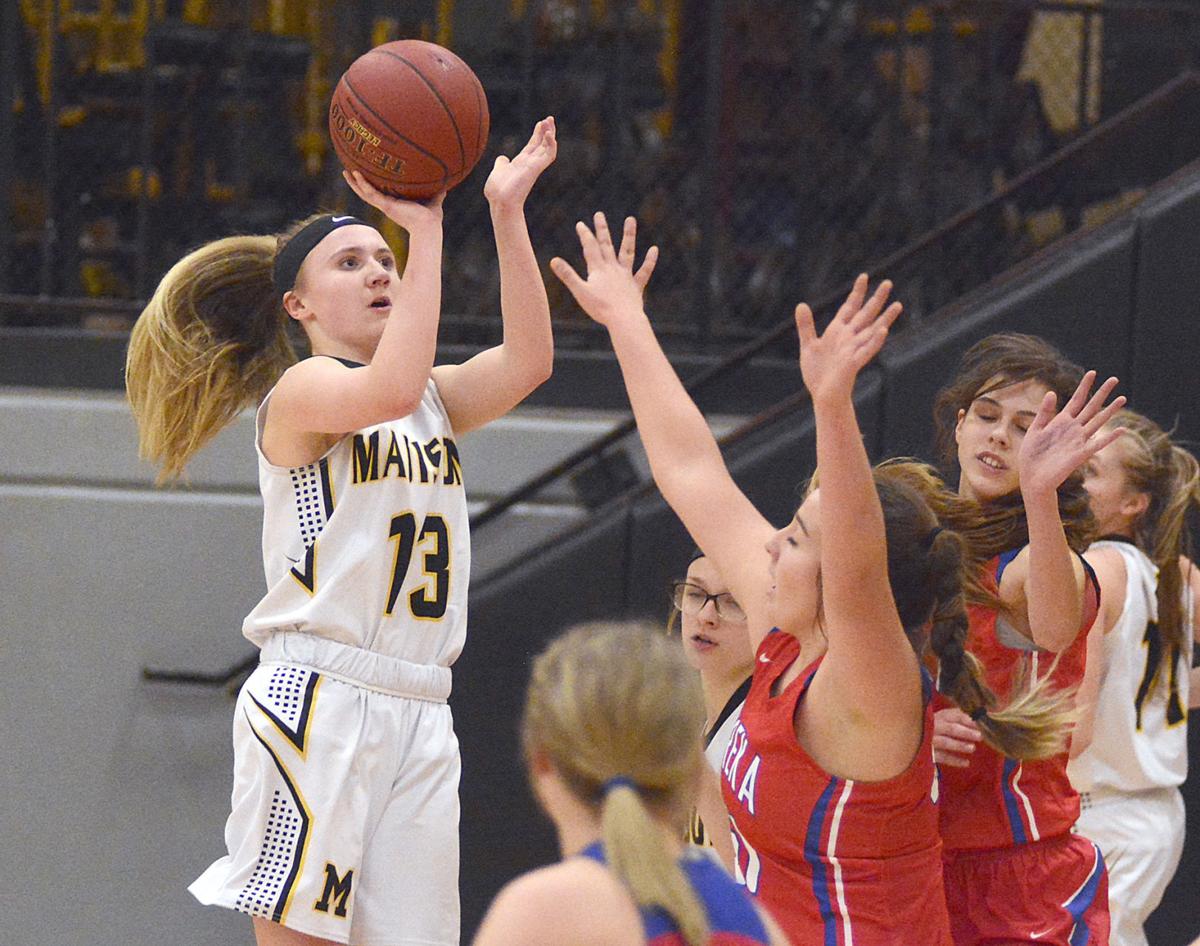 Madison freshman Reese Farrow (13) shoots the ball against Eureka on Tuesday evening. Farrow had five points in a 63-31 loss to the Tornadoes. 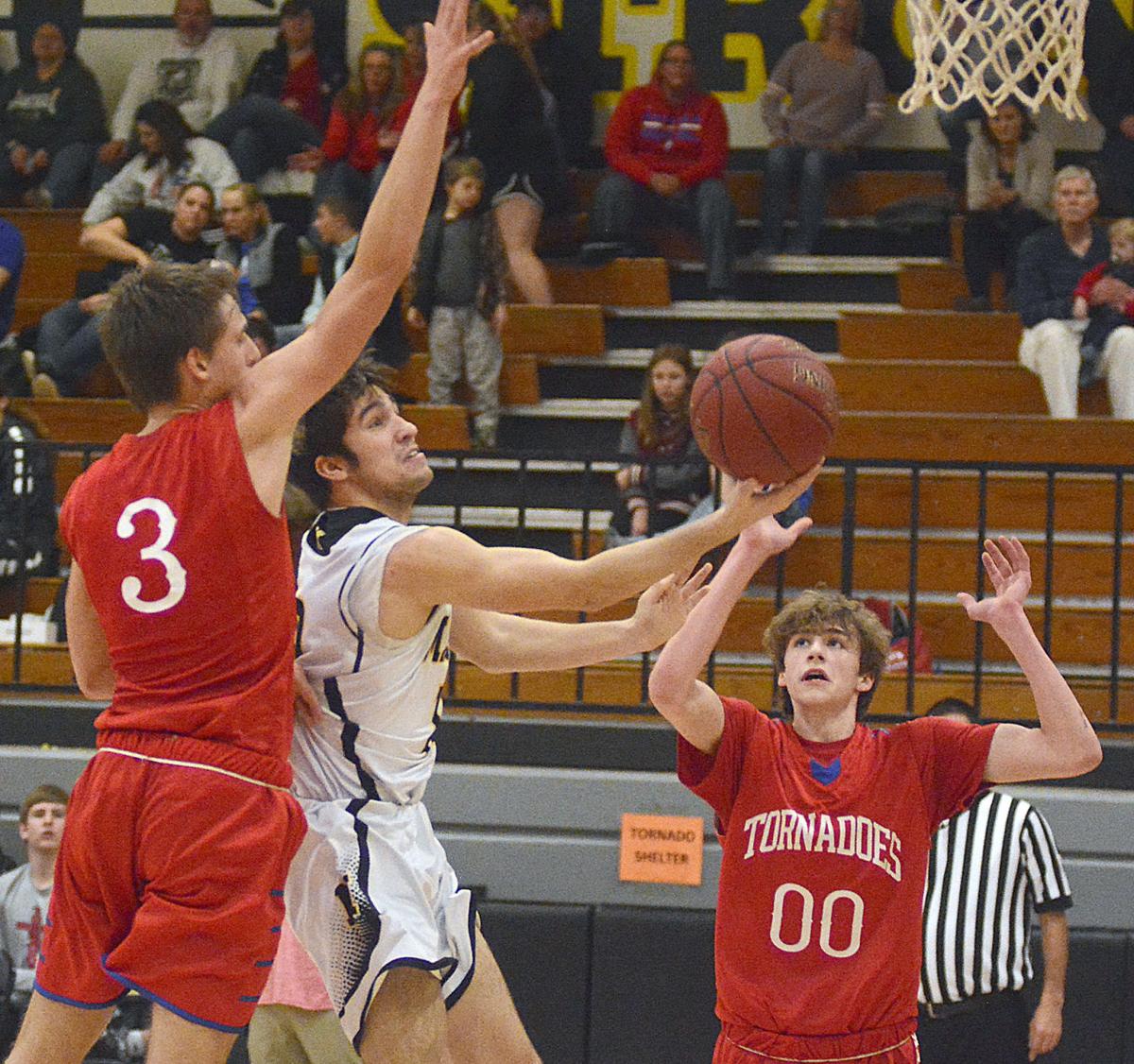 Madison's Nasun Wasson (10) drives to the basket, while Eureka's Quinton Phelan (3) and Kobe Koehler (00) attempt to defend on Tuesday night.

Madison freshman Reese Farrow (13) shoots the ball against Eureka on Tuesday evening. Farrow had five points in a 63-31 loss to the Tornadoes.

Madison's Nasun Wasson (10) drives to the basket, while Eureka's Quinton Phelan (3) and Kobe Koehler (00) attempt to defend on Tuesday night.

MADISON — There was plenty of tornadic activity in Madison on Tuesday night, but all within the confines of the Bulldogs’ gymnasium.

That is where 3A Eureka blew by the host in both ends of a doubleheader.

The Madison boys were doomed by foul trouble and third quarter turnovers, dropping their contest 75-64, while the Eureka girls took Madison by storm, 63-31.

“The effort and all that stuff was there tonight,” Madison head boys coach Brett Dannels said. “They sped us up. We like to play an up-tempo game, their up-tempo is just a little quicker than ours and I think they’re a little more experienced at that than we are.”

It was Madison that took charge early on in the boys’ contest, with 3-pointers from Ryan Wolgram and Chase Harrison sparking an 11-3 run to open the game.

Madison remained in front until the final three minutes of the first half, when Eureka broke off its own 10-3 run to flip the scoreboard. Though Austin Watts and Harrison hit 3-pointers to help the Bulldogs keep pace, Eureka remained the leader heading into the third.

“For the most part, our kids did a great job of responding to every run they made,” Dannels said. “We kept ourselves in the game (but) the third quarter was tough.”

Harrison, who sat most of the second quarter due to having three fouls in the opening period, also was used sparingly in the third quarter before picking up his fourth foul.

And with him absent from the court, the Tornadoes’ defense spun the Bulldogs mightily, as the length of Eureka’s Kobe Koehler and Quinton Phelan forced turnovers that resulted in layups on the other end. When the teams entered the fourth, the visitors had turned a two-point advantage into a 15-point spread.

“I asked (Harrison) to defend a kid that was quicker than he is,” Dannels said. “And I thought he did a great job ... you step up and play your tail off for your teammates and unfortunately, tonight, he got in foul trouble. I thought the other kids, in the first half especially, responded really well. (They) kept the game good and close, made some shots when (they) needed to and ultimately when he got his fourth foul in the third quarter, that set us back and we struggled for a five or six-minute run there and that was the separation.”

Madison fought back within nine during the fourth quarter, but couldn’t find enough stops for a Eureka team that had built plenty of momentum with its plan of attack.

Phelan and Koehler combined for 33 points, while Harrison led Madison with 20.

The Madison girls faced a far different struggle in their battle with Eureka.

A roster already lacking depth was fatigued by illness through the week, as well as a difficult match with Eureka’s length in a 63-31 win for the Tornadoes.

Madelyne Koop scored 20 plus points from her spot in the paint, while the Bulldogs only had one field goal from a player other than Emily Farrow until the final 1:20 of play.

Farrow scored 16 points, while Taylor Williams added 11, seven from the free-throw line. The Bulldogs’ offense struggled to find any flow most of the night, trailing by 14 at the end of the first quarter.

“We struggle when it comes to the depth of our team,” Madison head girls coach Vanessa Kresin said. “We are a fairly (well-conditioned) team (but) we’re battling sickness at the moment and when they’re able to sub in for fresh legs and still be able to put in quality minutes, that’s hard to compete with no matter how good a shape you’re in, when you’re only playing five, six gals.”

Reese Farrow made a bucket two minutes into the second half and drained a trey at the final buzzer. Williams also made a 3-pointer with 1:15 remaining in the fourth quarter.

Outside of that, however, Eureka was able to limit Madison’s looks, resulting in the mismatch.

“I thought our girls did a great job of battling out there,” Kresin said. “Their heart and their hustle was in it.”