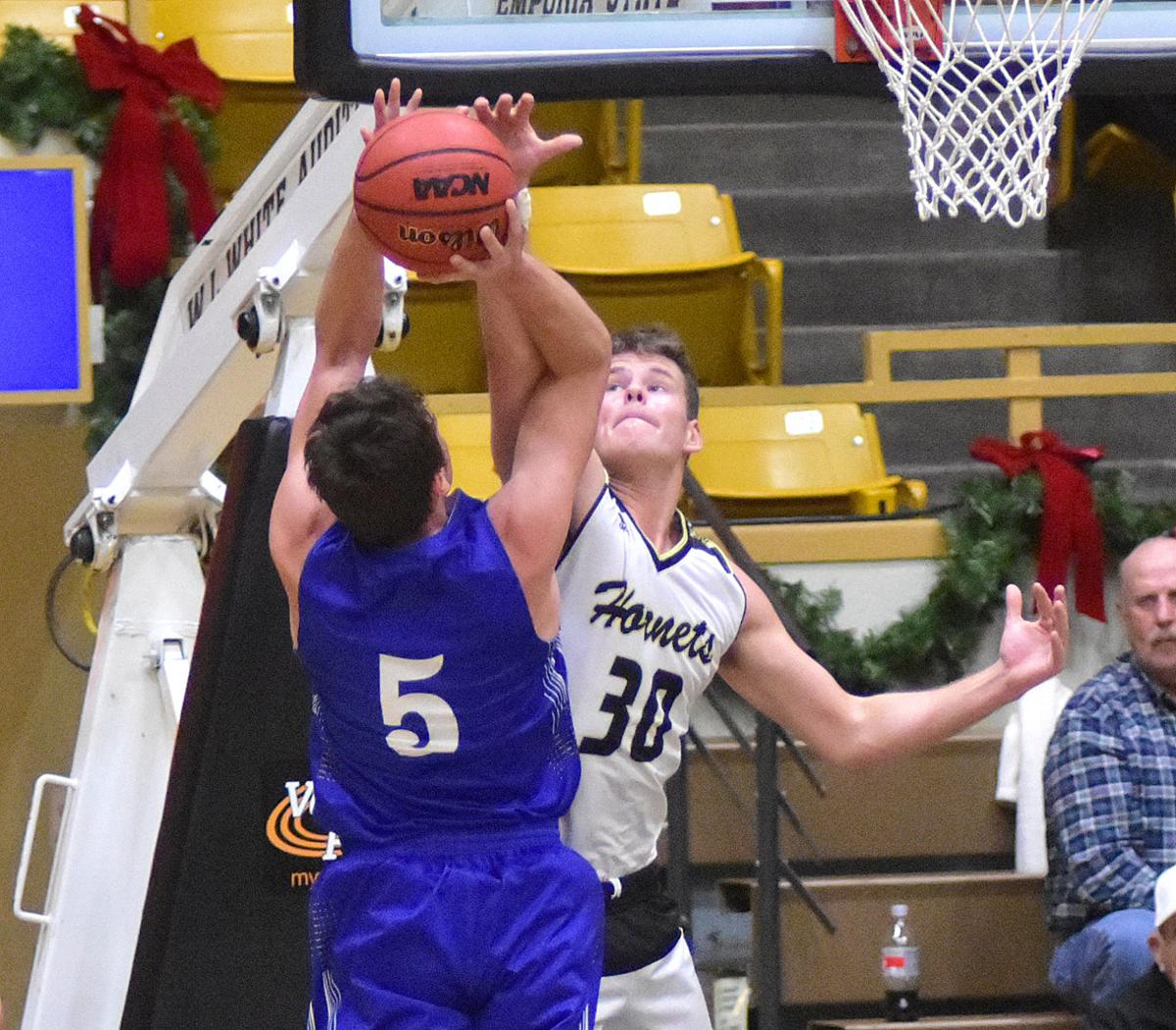 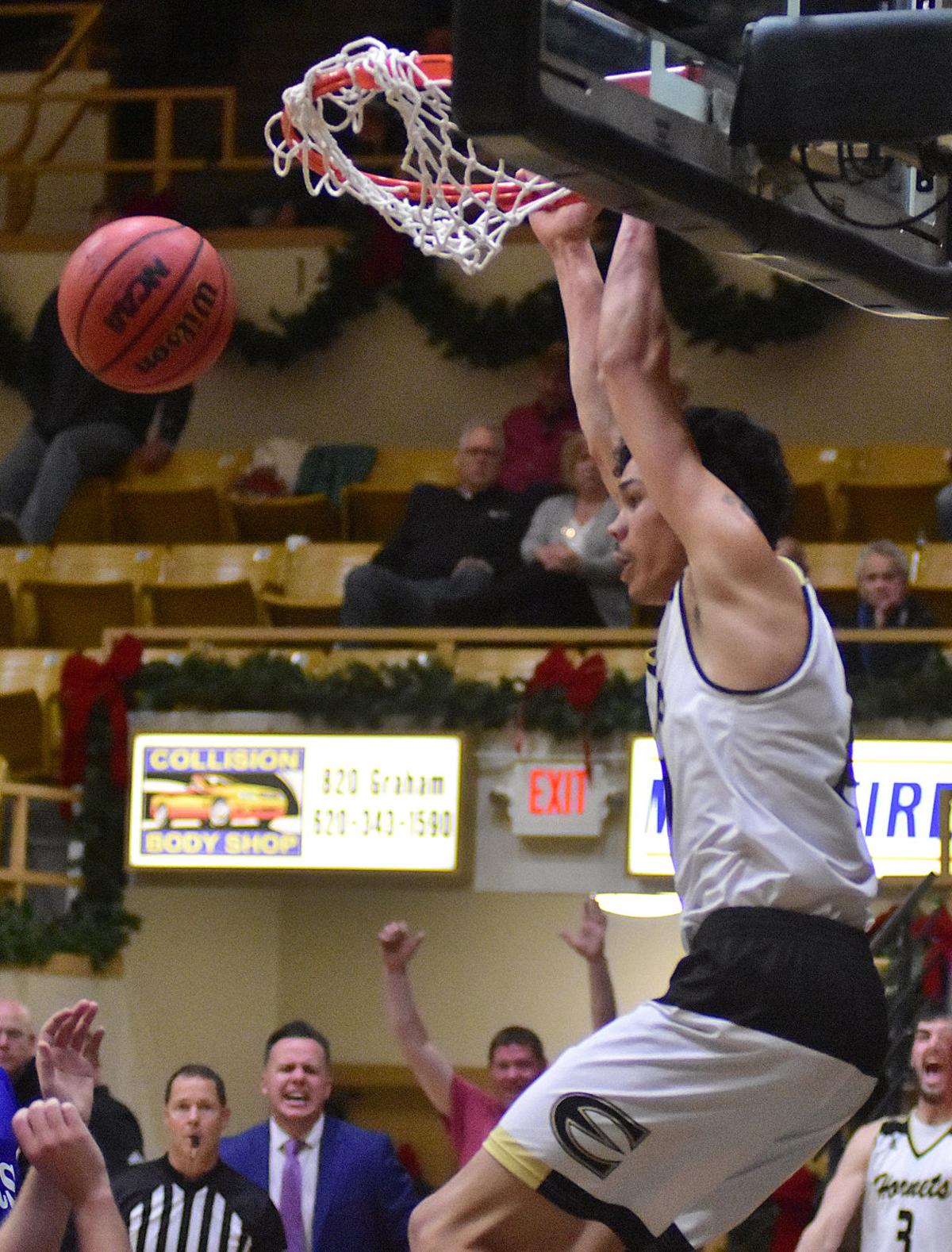 ESU’s Brendan Van Dyke scored eight points on Thursday, including a pair of dunks, to help his team keep Nebraska-Kearney at bay in a 78-68 Hornet win.

ESU’s Brendan Van Dyke scored eight points on Thursday, including a pair of dunks, to help his team keep Nebraska-Kearney at bay in a 78-68 Hornet win.

The Emporia State men had built an eight-point advantage heading into halftime of their MIAA opener on Thursday night.

But it took less than two minutes in the second half for that lead to disappear.

After the Lopers tied the contest at 35, Emporia State went back to work and didn’t surrender the lead a second time, claiming a 78-68 win over Nebraska-Kearney at White Auditorium.

“We made some substitutions,” ESU Head Coach Craig Doty said of the most prominent change. “That’s the good thing about having the depth that we have is that when one guy is on, the other guy is off and vise versa. It would be nice if we were all on all of the time, but it’s basketball and it’s a young team.”

What surpassed its youthful inexperience was the poise Emporia State played with down the final stretch. The Lopers couldn’t get any closer than within six in the final 10 minutes of play.

“It was a big, huge win for our guys,” Doty said. “For them to come together in their first MIAA game and beat a Kearney team that had won three straight over Division II (opponents), including beating Fort Hays State by 14 last game ... they had a ton of momentum coming into tonight.

“There’s a few telling stats ... we led for 33 minutes of the game. I think that shows that we wanted to control early, we wanted to control throughout. It wasn’t always pretty, but despite the missed free throws, you saw an incredible defensive effort in the game. We held them in the first half to 31 percent from the field while we shot 50. Just overall, top-to-bottom, a really good effort on both sides of the ball.”

Those missed free shots Doty discussed were scattered around all night, but the ones ESU needed the worst came to the hands of Jumah’Ri Turner, who was 7-for-8 overall, including a 5-for-6 turn in the final 3:30 of the game. The junior from Minnesota leads ESU in made free throws and percentage (with more than four shots) on the season.

Thiessen also took his turn picking up his team. The freshman big from Inman entered Thursday with just two 3-pointers in 12 tries.

He was 4-for-4 against the Lopers, including a shot-clock beater that pushed ESU’s lead to double-digits in the second half.

“I guess it’s just my teammates trusting me,” he said. “It’s just trusting each other and having the confidence to knock (the shot) down.”

“We just came out and played hard,” Turner said. “Mason knocked down some huge threes, he really gave us a lift. We had a few big dunks — everything was rolling for us tonight.”

The other notable development for ESU was the play of junior guard Justin Williams, who logged nearly 25 minutes of court time as freshman Keyon Thomas, who had scored 20-plus points in each of his last four contests, was just 1-of-5 shooting with four points, one assist, one steal and one turnover in his lowest minute total since the season opener.

Williams was just 2-of-6 from the floor, but made seven free throws and dished four assists.

“We have two-headed monster at that position,” Doty said. “Both guys can be very effective. We haven’t seen Justin Williams play like that (much yet), but ... we believe in him and know how good he can be. We’ve got two guys, neither one of them have egos, neither one of them get down in these situations, they cheer on the other guy.

The quick growing curve shown by the likes of Thomas and Thiessen in the early portion of the season has Doty and his fellow coaches optimistic about how quickly the Hornets can compete.

“Mason and Keyon both ... were projected redshirts coming into this season,” he said. “Not only have they carved out big roles within the program but now they’re performing in bigtime games. They’re playing like they’re upperclassmen. It says a lot about the coaching they had in high school and it says a lot about their pride and passion to be at Emporia State and compete at this level.”

Next up for ESU will be Fort Hays State on Saturday afternoon.

“(They’re) going to be good,” Doty said. “(Six-three senior guard) Devin Davis is a tough matchup for us. We were up 39-26 last year at halftime and (they) came back and beat us — (and) we have a less-experienced squad (this year). Some of our pieces are coming together. We’ve got to see which team shows up for us. Recently, we’ve had at least five or six guys show up pretty big for us and that’s why we’ve been competitive every game. If we get eight, nine, 10 guys (to) show up for us, then we hope we can take control of that basketball game.”

“(We can’t) be satisfied with how we played tonight but just go into practice (Friday) with the same energy we had tonight,” Turner said. “Just keep learning and getting better ... (there are) big things to come.”