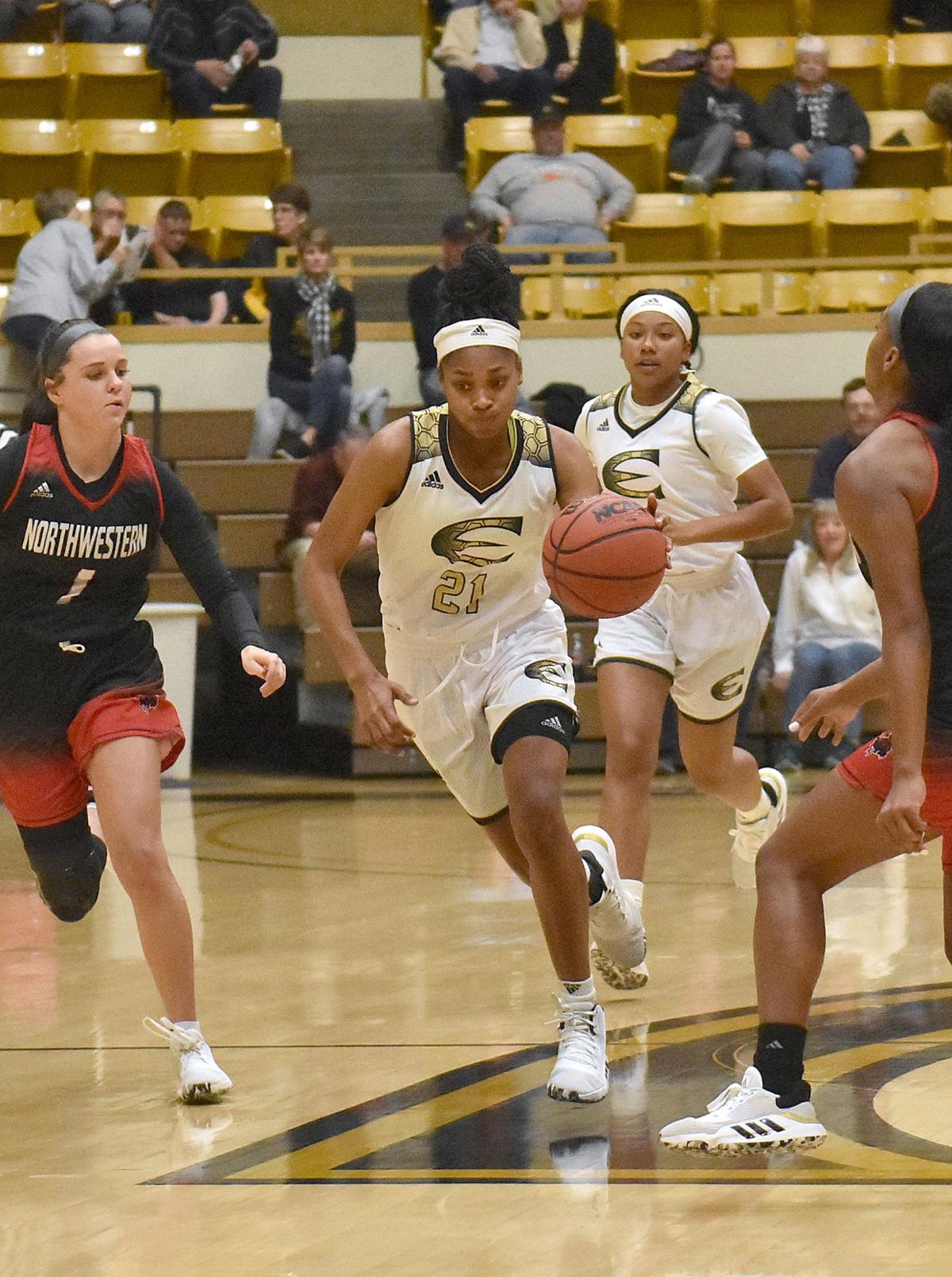 Emporia State senior Jessica Wayne is the reigning MIAA Player of the Week entering the Lady Hornets’ first conference matches, with Nebraska-Kearney on Thursday and Fort Hays State on Saturday. 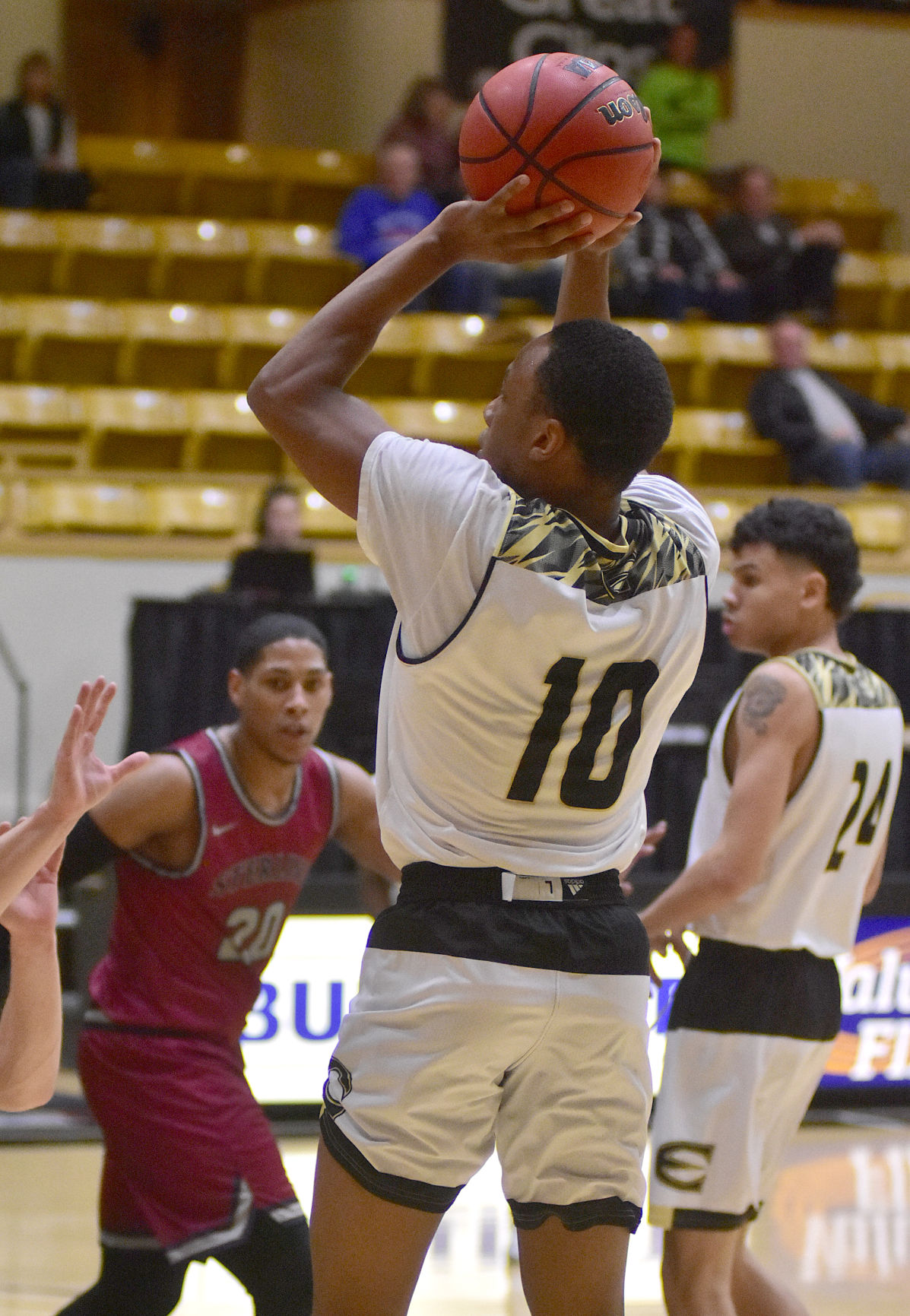 Jumah’Ri Turner (10) has been among the Hornets’ steadiest scoring options since the start of the season and will be sought to provide that consistency once the MIAA slate opens on Thursday evening against Nebraska-Kearney.

Emporia State senior Jessica Wayne is the reigning MIAA Player of the Week entering the Lady Hornets’ first conference matches, with Nebraska-Kearney on Thursday and Fort Hays State on Saturday.

Jumah’Ri Turner (10) has been among the Hornets’ steadiest scoring options since the start of the season and will be sought to provide that consistency once the MIAA slate opens on Thursday evening against Nebraska-Kearney.

The Emporia State basketball teams have both seen a variety of twists and turns already in the first month of their 2019-20 campaign.

That roller coaster ride is likely to get even more aggressive as the Hornets begin MIAA play at White Auditorium on Thursday night, hosting the Nebraska-Kearney Lopers.

The Lady Hornets have spent much of their preseason facing some of the upper-tiered teams in the region’s other conferences after road trips to Arkansas and South Dakota.

“It’s going to be another competitive MIAA season on the women’s side for sure,” ESU Head Women’s Coach Toby Wynn said Monday on KVOE’s “Hornet Talk.”

Though the non-conference slate across the standings shows a large balance -- — seven teams have between one and three losses — — Emporia State has every intention of being in the mix for a strong postseason run.

“We have to be ready, but I think we’ve definitely put ourselves in a position to play in some competitive games that simulate what an MIAA game feels like,” Wynn said. “From that perspective, I do feel that we’ve given ourselves the best opportunity possible to prepare us for these games coming up this week. Hopefully it pays dividends for us.”

The Lady Hornets first MIAA contest will match them with a UNK squad that has very few upperclassmen on the roster.

“Last year they were freshmen and sophomores so now they’re all sophomores and juniors,” Wynn said. “That’s obviously a year of experience, but they have a really good point guard that takes care of the basketball, a post player that scores inside, another inside forward and a couple guards that shoot well from the perimeter, they’re just a good, solid team ... a formidable opponent.”

ESU will put the reigning MIAA Player of the Week on the court in senior Jessica Wayne, who had the Lady Hornets’ first triple-double in almost 20 years on Friday evening, adding a school record 11 steals into the mix.

The Hornet men, while playing a few Division II opponents, have largely tackled several NAIA teams as they look for some consistency in their rotations. Craig Doty has, during that stretch, seen some players grow exponentially and others struggle to yet find their footing.

“Even some of our junior college guys, surprisingly enough,” he said Monday on KVOE’s “Hornet Talk.” “I don’t know if its the level of competition, I don’t know if it’s just the stage, they’re just a little hesitant, a little timid and some of these guys even come from inner city areas. I think there’s just a comfort level from the transition that some people adapt to faster than others.”

The two that have made the most distinct jump have been junior Jumah’Ri Turner and freshman guard Keyon Thomas. Turner was expected to be one of the steadiest scorers for this squad but Thomas’ emergence as a true freshman has been a pleasant surprise for the Hornets.

Both will be among those sought to provide Emporia State with some firepower as it tackles the Lopers on Thursday night and Fort Hays State on Saturday.

“We’re excited to get started,” Doty said. “Kearney brings back a few nice players from last year but they finished in the bottom quarter of the league and we expect to compete. We need a good fanbase there as we normally get at White and we look forward to getting on the floor Thursday.”

As for how the MIAA plays out, Doty figures the top tier is established, but there will be an indefinite free-for-all among the rest of the conference.

“Northwest Missouri(‘s) ... production level and efficiency is through the roof,” he said. “Firmly in second place is Missouri Southern ... and then Northeastern State is really, really good. Outside of that, everything is up for grabs. The next four-through-14 spots is up in the air. A lot of these teams are brand new in terms of players. It could be a really interesting league. There’s going to be a lot of ups and downs for every team as everybody’s trying to figure out what their identity’s going to be.”

Tipoff for the ESU women is scheduled for 5:30 p.m. Thursday and 1:30 p.m. on Saturday, with the men’s contest to start approximately two hours later.