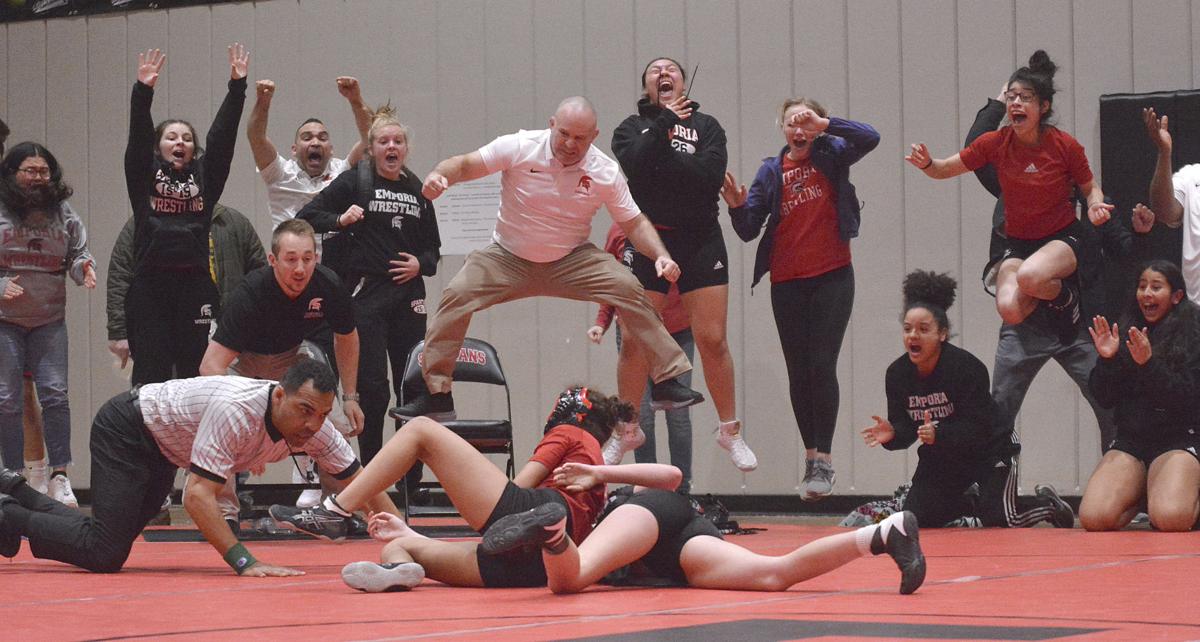 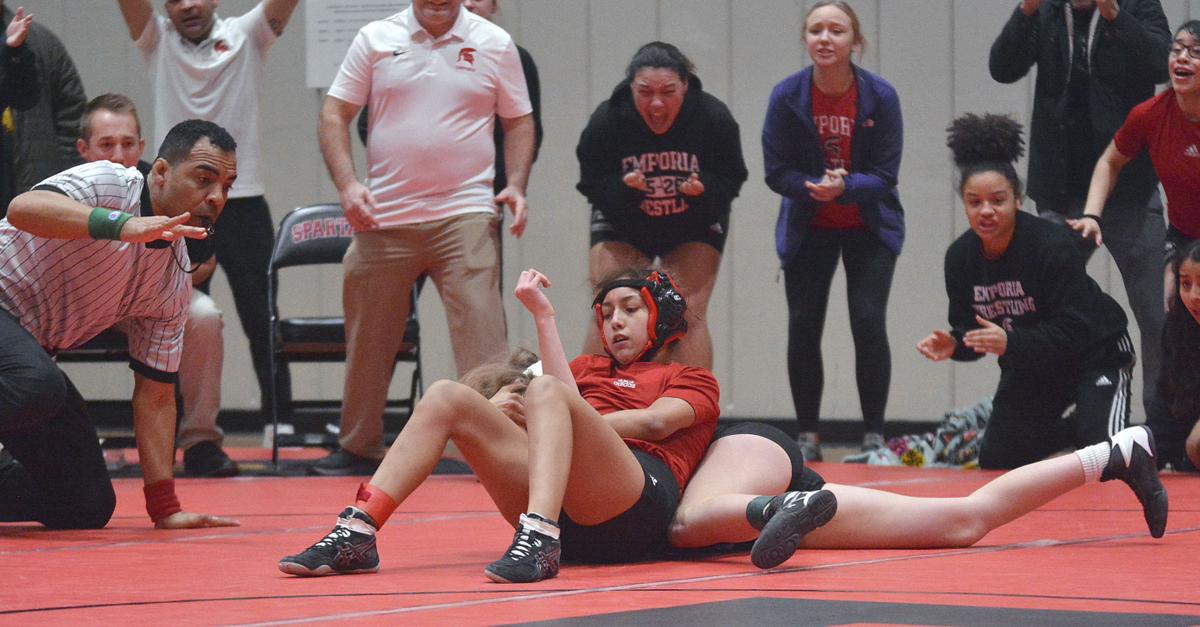 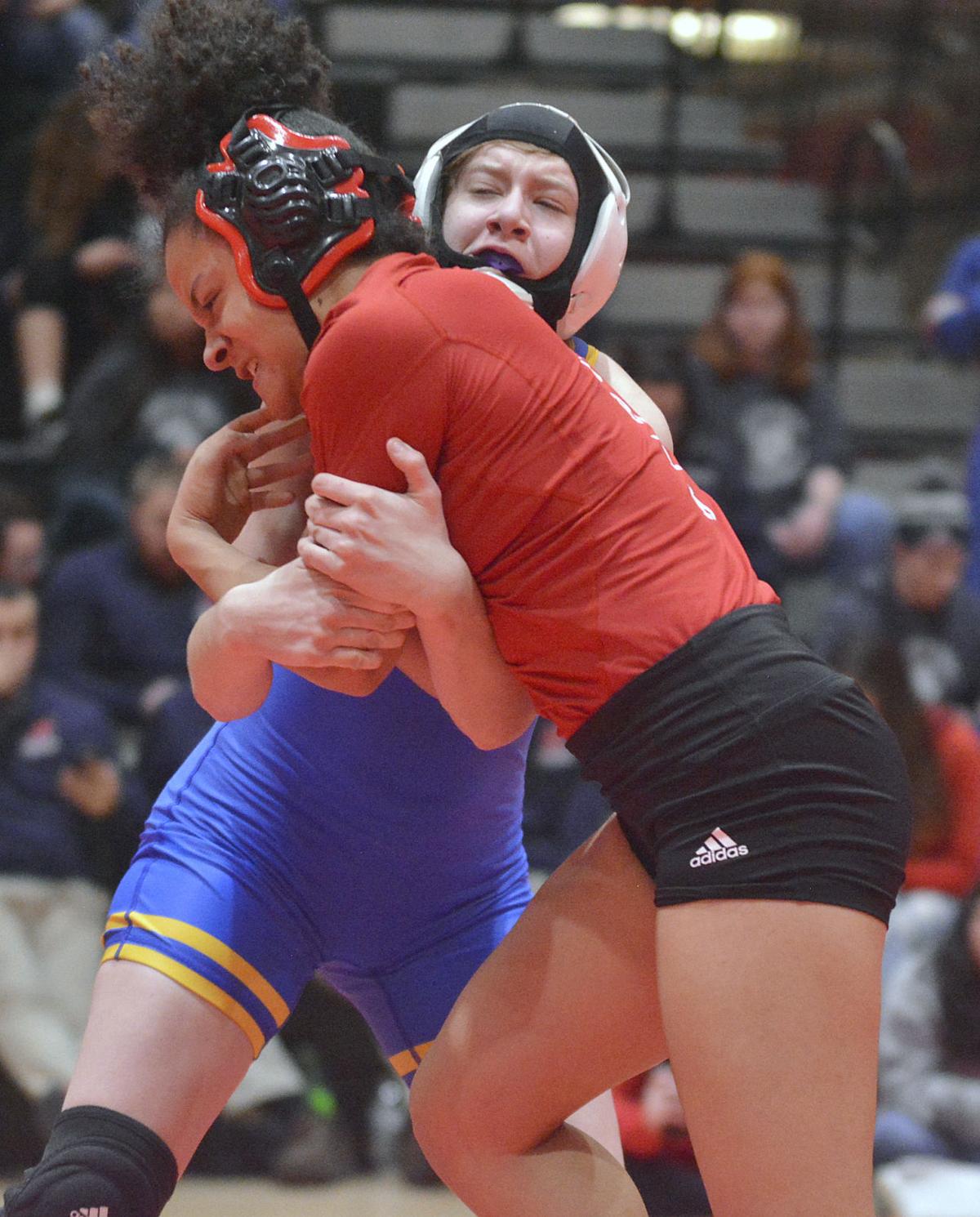 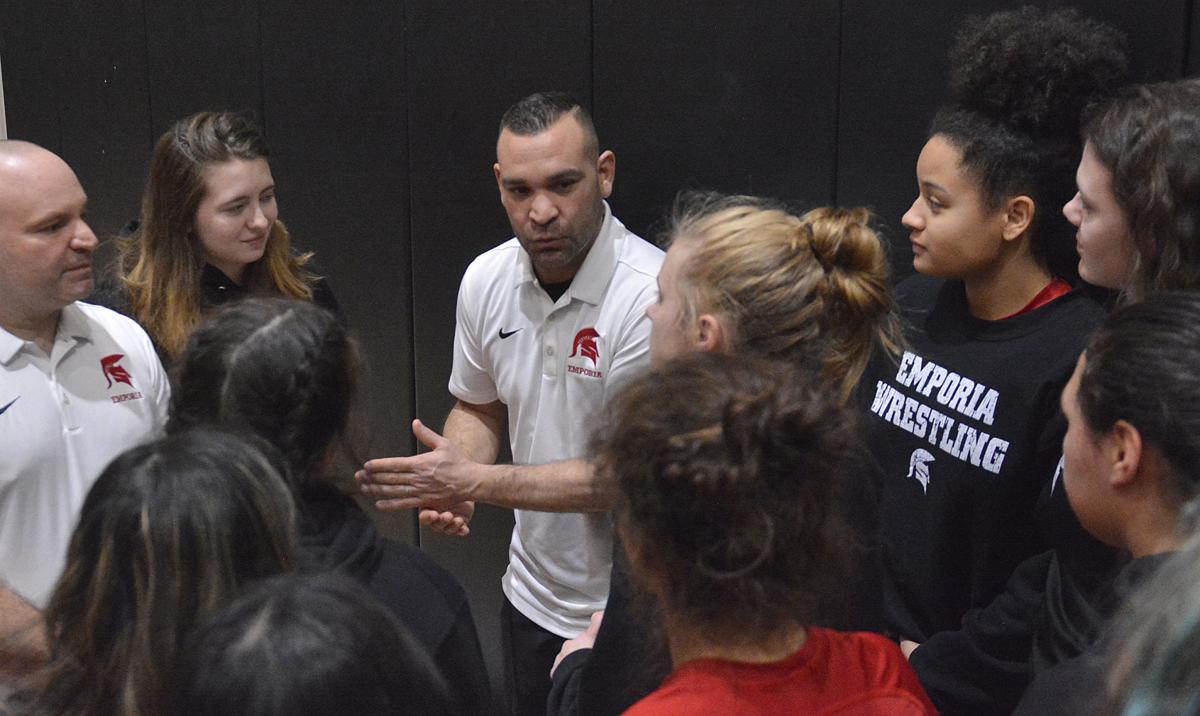 EHS Head Coach Brook Medrano speaks to his girls after they won the Centennial League Wrestling Tournament on Saturday. 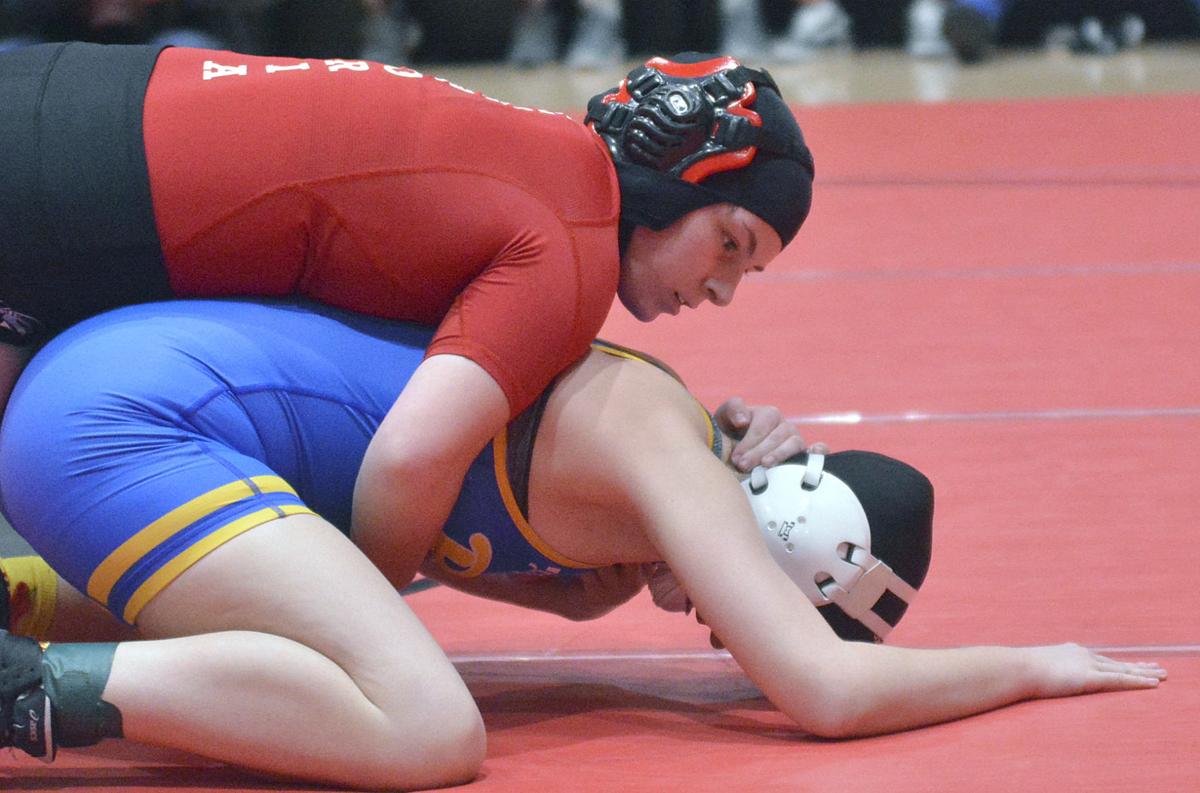 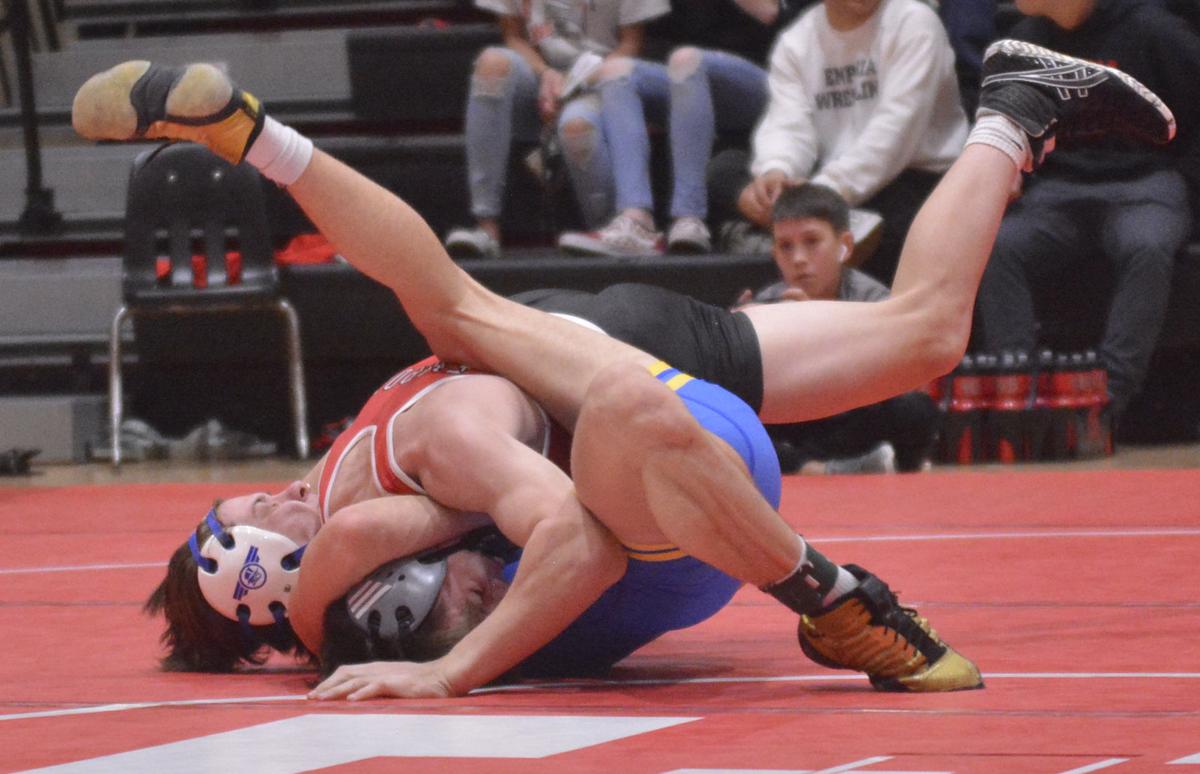 Xerarch Tungjaroenkul (top) takes Washburn Rural’s Bowan Murray to the mat in the championship round of the Centennial League Wrestling Tournament Saturday at EHS. Tungjaroenkul was awarded league champion in the 132-pound bracket with the pin. 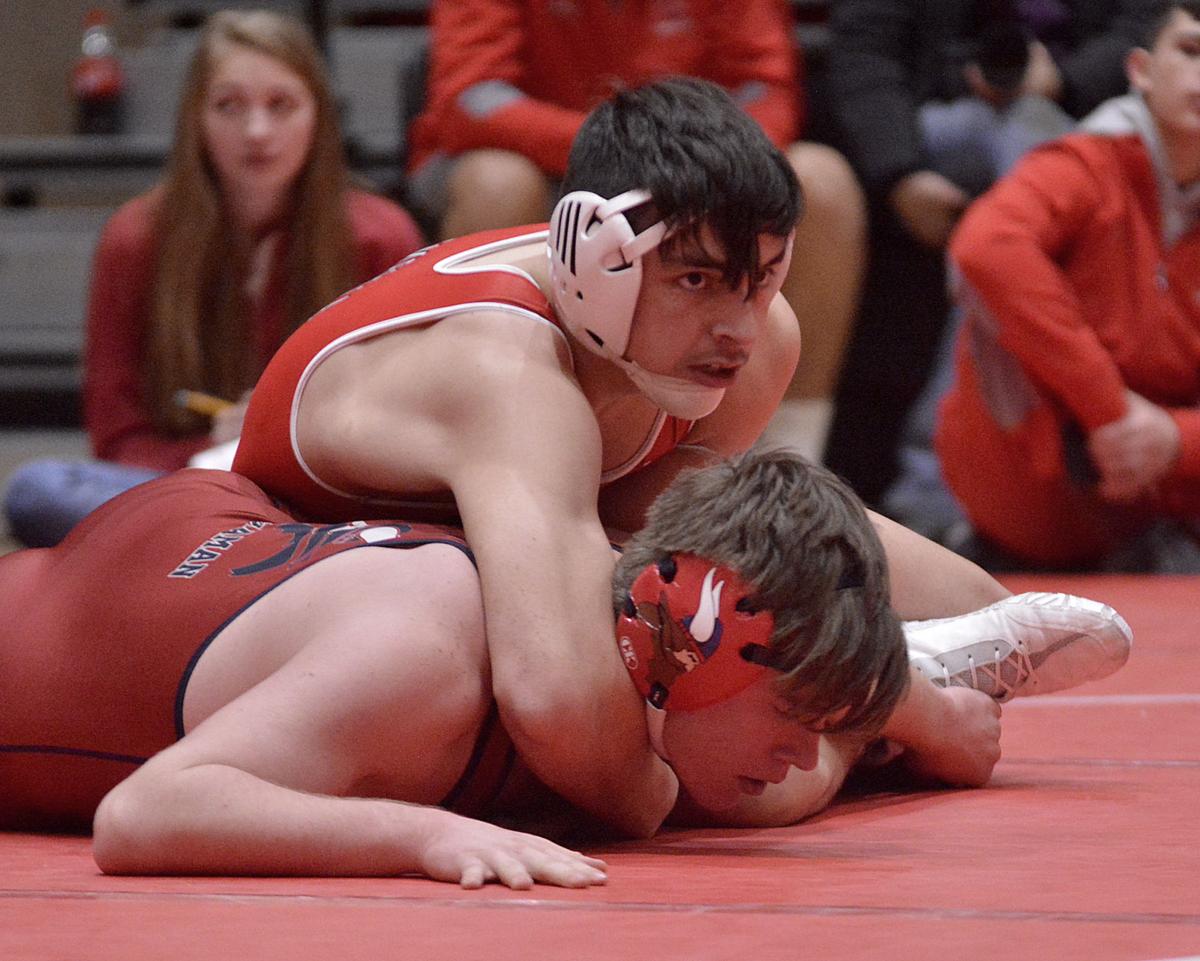 EHS senior Ethan Garate defeated Seaman's Bailey Meredith (bottom) during the Championship Round at 170 pounds on Saturday during the Centennial League Wrestling Tournament at EHS. 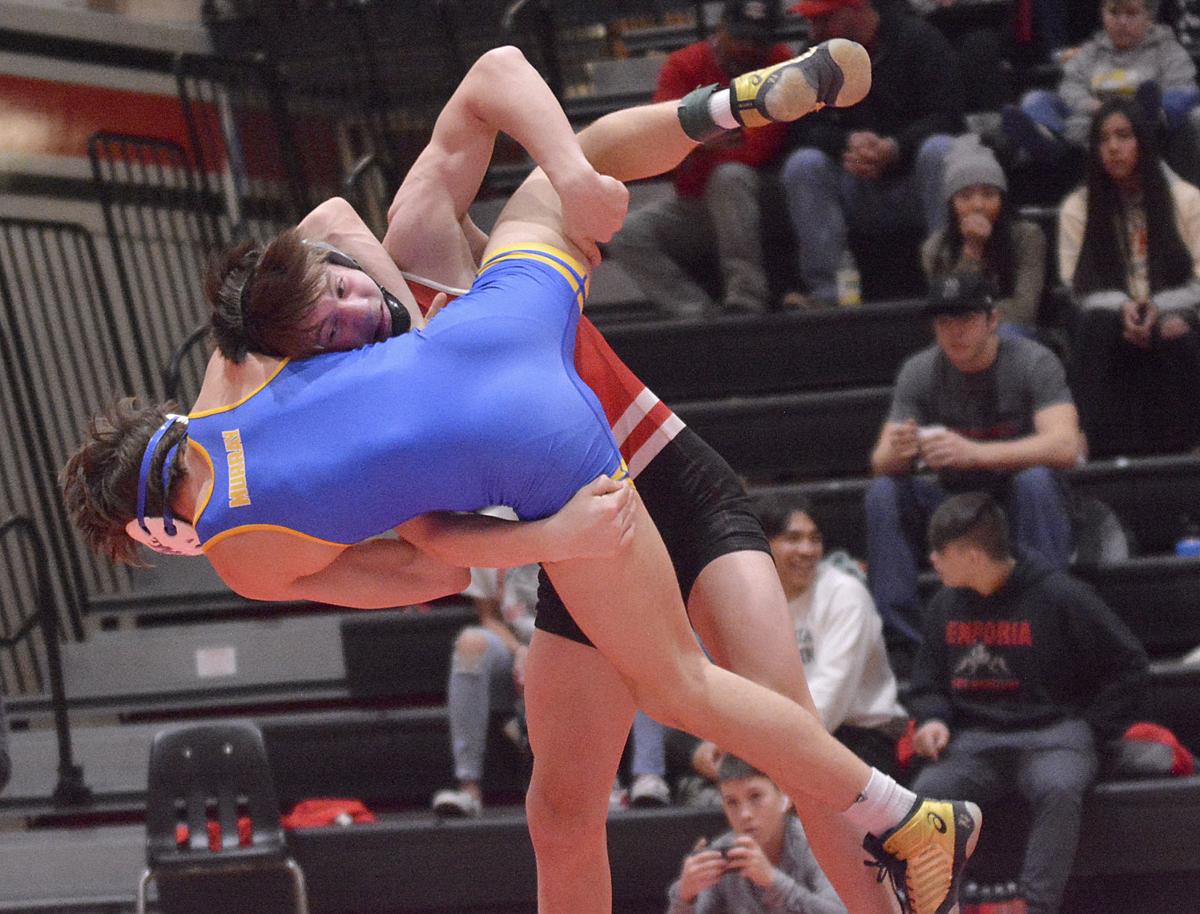 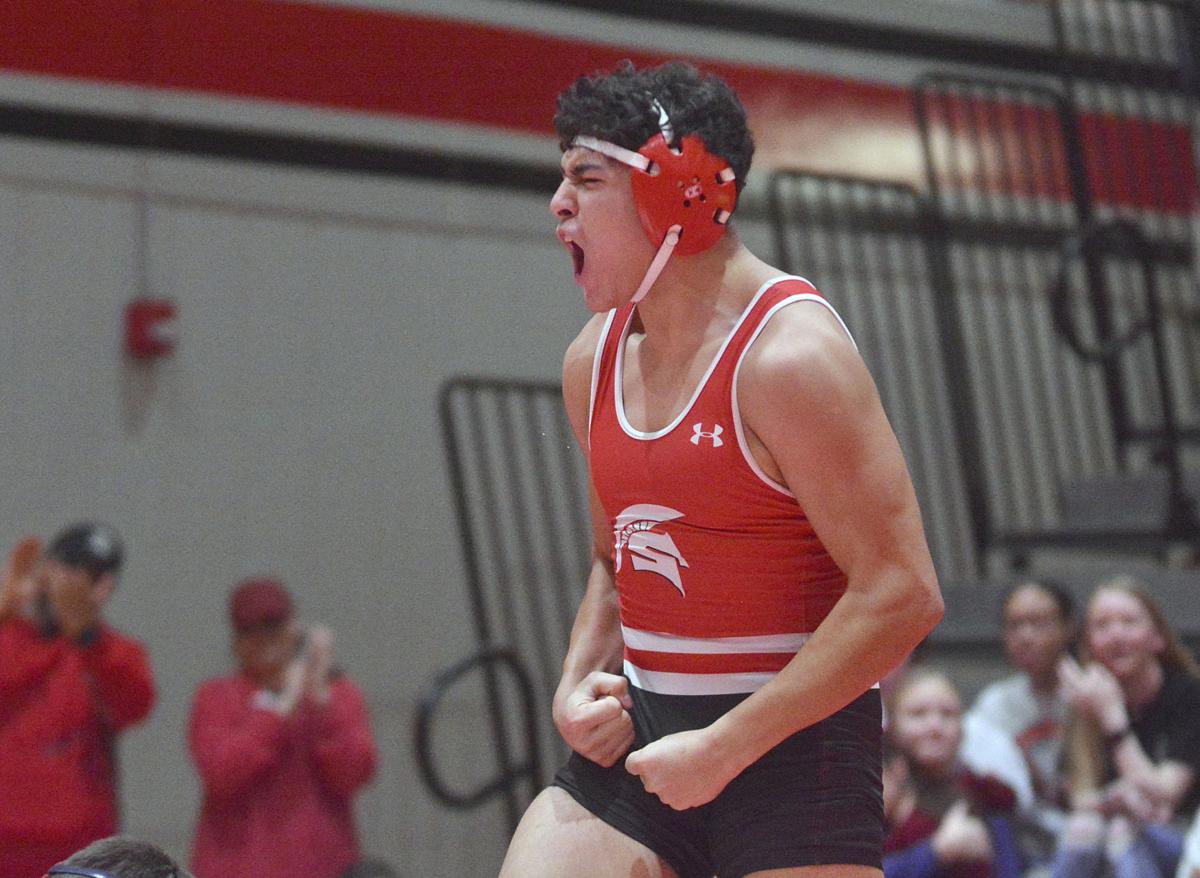 Emporia freshman Bobby Trujillo celebrates his victory in the third-place match of the Centennial League Wrestling Tournament Saturday at EHS.

EHS Head Coach Brook Medrano speaks to his girls after they won the Centennial League Wrestling Tournament on Saturday.

Xerarch Tungjaroenkul (top) takes Washburn Rural’s Bowan Murray to the mat in the championship round of the Centennial League Wrestling Tournament Saturday at EHS. Tungjaroenkul was awarded league champion in the 132-pound bracket with the pin.

EHS senior Ethan Garate defeated Seaman's Bailey Meredith (bottom) during the Championship Round at 170 pounds on Saturday during the Centennial League Wrestling Tournament at EHS.

Emporia freshman Bobby Trujillo celebrates his victory in the third-place match of the Centennial League Wrestling Tournament Saturday at EHS.

Freshman Azia Obregon knew a lot was on the line when she stepped back onto the mat for the final match of the Centennial League Wrestling Tournament on Saturday afternoon.

She just hadn’t been yet told exactly how much.

Obregon battled through the first two periods and trailed 8-4 heading into her third, but just a few seconds later, she slipped out of the grip of Washburn Rural’s Kaitlyn Morris and latched on her own headlock, keeping Morris with her back to the mat. The slick move resulted gave her the pin, which equated six points — enough to flip the standings and give E-High the team championship over the Blues, 157-156.

“I felt a lot of excitement, knowing that I got first place and I made my team happy, too,” she said.

Obregon even admitted a near-defeating moment, as it can be as much mental, if not moreso, than the physicality of it. She had made some mistakes in her previous battle that had led to her defeat. Those were still in her mind as she faced the four-point deficit entering the third period.

“My thought I was maybe going to give up but I knew that I could beat her,” Obregon said. “I just had so much motivation.”

The motivation was just a few short feet away as her sideline was overcome with elation as the match was declared a victory. It wasn’t until a short while later she learned how powerful a moment that truly was.

It was symbolic of the day for the E-High girls, down but not out.

“Perseverance, that’s what it is, that’s what it comes down to, that’s what this sport is about,” EHS Head Coach Brook Medrano said. “Sports (are) tough. Sometimes there’s highs and lows all the time in a match. You win or you lose and it’s about how you filter your short-term memory, recomposing yourself and battling back through. I think that’s a great life lesson and she definitely did. She was losing in the end, she kept her composure, caught her (opponent) in a headlock and pinned her and won it for the team.”

She was one of four first-place tallies for the E-High girls, joined by Trinity Ervin, Tehya Osage and Gloria Peroza atop their respective podiums.

The runners up were quite plentiful, as Sujiely Duran, Miranda Taylor, Maddie Griffin, Alicia Turpin, Kiona Flores-Delgado and Megan Olson each placed second.

Evelin Geronimo was third in her weight class.

Peroza savored the moment, perhaps just as much, as the sole senior on the team.

“It was such a rush ... such a roller coaster,” she said of watching Obregon’s finale. “It was really a team effort (and) she really rose to the occasion. I’m so proud of her.”

Peroza earned her two victories on the day both by fall. Her championship came in the second period against Washburn Rural’s Amelia Sayers.

“I really just did what my coaches have been telling me this entire time and (focused on being) more offensive(-minded,” she said.

And she was on the front row, cheering for her teammates the rest of the way.

“She’s definitely a leader,” Medrano said. “What she lacks in wrestling knowledge, she (makes up) with heart. She’s definitely a competitor and it shows out there on the mat. She’s doing amazing for never wrestling before, to coming out here ... the way she’s progressing, I see good things come regionals and state.”

Their moniker as ‘trailblazers’ has carried them to this point, but Medrano reminded the group that there is still a lengthy path yet ahead when it comes to regionals and state..

“Going into (the season), I told them they’re trailblazers,” Medrano said. “That’s what they showed today. They showed a lot of passion. It came down to the last match, but everything, us getting pins, not getting pinned way before that, all day long, is what led to that. I said “we’ve got unfinished business.” Be happy with what you’ve done but trust the process now.

“I was proud of them, period.”

The Spartan boys had a strong finish to the league tournament as well, ending with a third place tally, behind only Washburn Rural and Manhattan.

Both earned the wins by pinning their opponent.

“I was coming in here thinking it was going to be tough and it ended up being pretty challenging, but I came out with the win,” Tungjaroenkul said.

His day consisted of a 14-1 major decision against Junction City’s Zane Thornton and then took town Washburn Rural’s Bowan Murray by fall, literally slamming the pin home early in the second period.

“Lifting him all the way in the air, I was kind of worried about it being called an illegal slam,” he said.

The victory was legitimate and yet another feather in the cap in his first varsity season.

Garate had a more taxing journey to the top, but finished his day with a 4-0 decision.

“I’ve got to put on a show for the home crowd at league,” he said. “it felt good. I felt good about it, getting three more wins on my record going into regionals and state.”

Senior Whitney Hall and freshman Lukas Hainline both were second, getting pinned in the championship round.

Tibbetts and Redick were both thrown into duty late, but performed well in their slots.

“We’re on the right path, just chipping away,” Medrano said. “I have two unseedable guys who got drawn into the bracket today take third (in) Tanner Tibbetts and Alex Redick. That just shows to our competition what we have. We don’t have a cake walk. You want to be the best, you’ve got to see the best. That’s what we’re doing. Xerarch wrestled tough, Lukas Hainline wrestled tough, all of them (collectively) wrestled tough. We’ve got some things to work on, but we’ve got two weeks to get there, heal up on some injuries. We’re on the right path, but ... (still have) unfinished business.

Medrano became even more proud as he helped roll up the mats and put away equipment as he got word that his team’s performance this year helped earn him the distinction as Cenntennial League (Co) Coach of the Year, sharing the annual honor with Washburn Rural’s Damon Parker.

“I told the guys that’s a reflection (of) you,” Medrano said. “If you’re not performing, there’s no way for me to get that. I gave the award to them. I’m excited, I’m nervous and excited at the same time. We’re doing good things.”