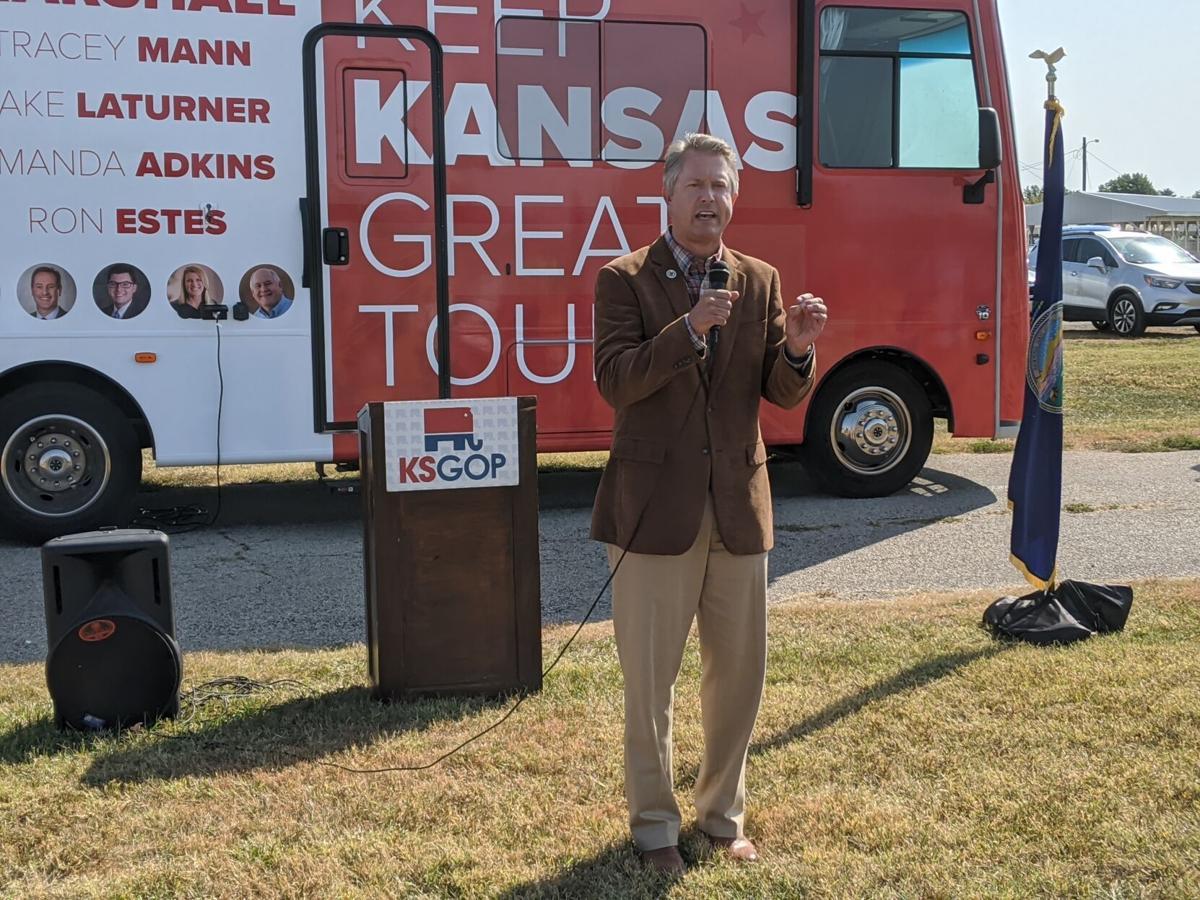 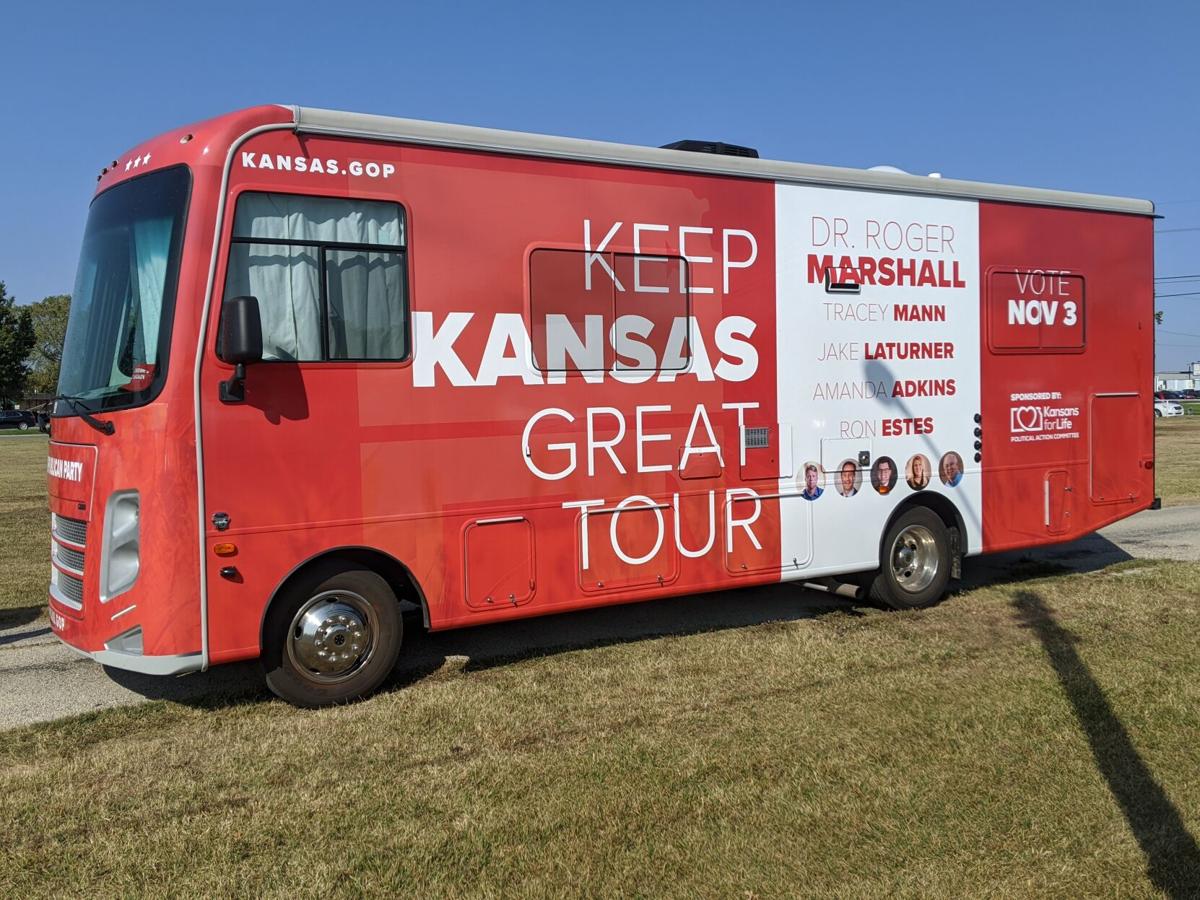 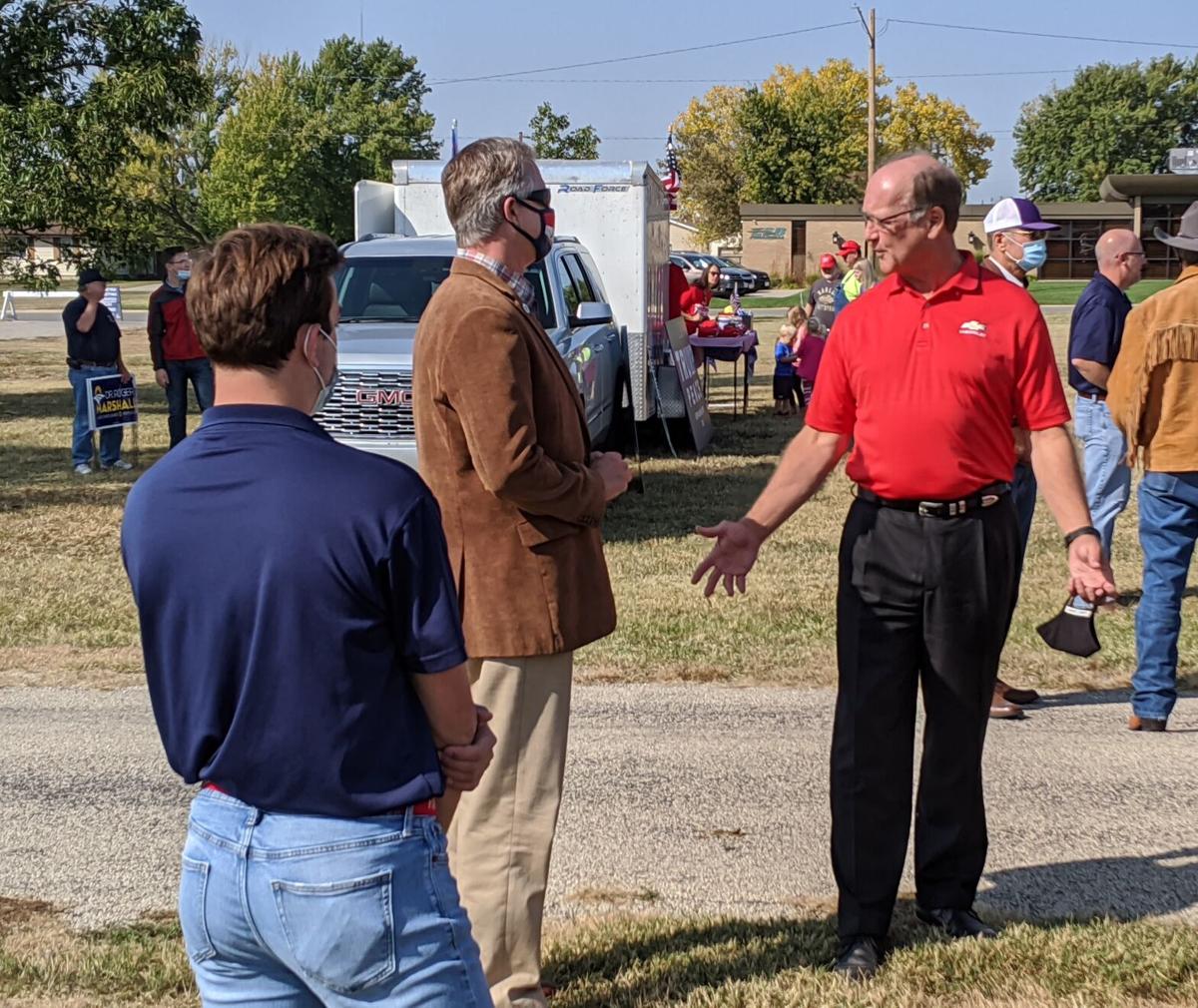 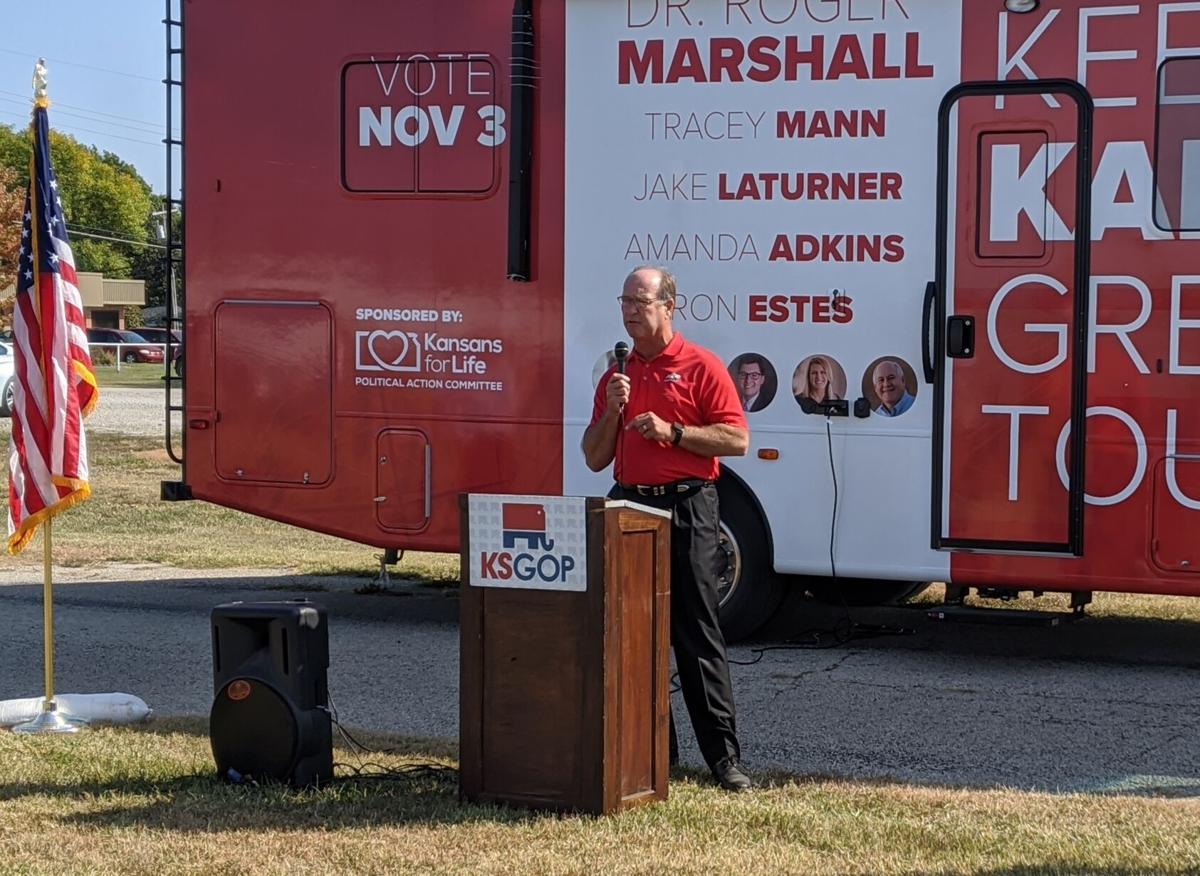 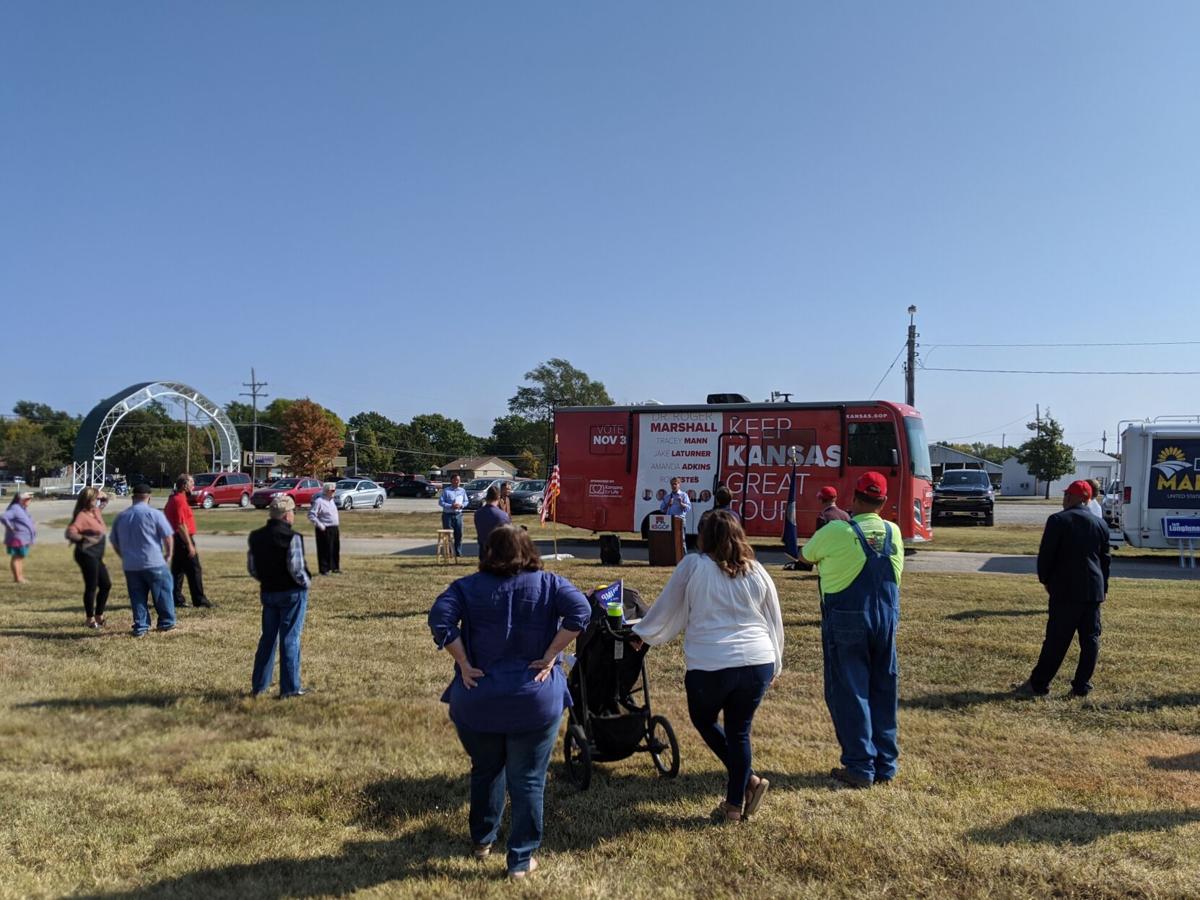 Marshall, a Republican from El Dorado, is running for the U.S. Senate seat being vacated by Senator Pat Robert.

Hosted in part by the Lyon County Republicans, the rally’s invited speakers also included State Senator Jeff Longbine, Secretary of State Scott Schwab and former Governor Jeff Colyer, with each saying the choice in Kansas’ District 1 Senate race — and the 2020 presidential election, at large — was a “clear cut” one.

The trio emphasized what they believed to be the dangers of voting for more liberal candidates, saying the majority of platforms currently held by the Democratic Party — especially those concerning abortion, gun control, the Supreme Court, support of law enforcement and general philosophy on helping the state recover from the COVID-19 pandemic — were incompatible with the values of the average Kansan.

“During my 10 year career, I’ve been labeled as one of those moderate, reasonable, responsible Republicans, which is the same way [Democratic District 1 Senate candidate Barbara Bollier] is trying to represent herself in the race for U.S. Senate ...” Longbine said. “I’d ask you all to look at this U.S. Senate race and decide who is the reasonable, responsible Republican that will move our nation forward versus what I consider to be an extremist that will move it far, far left into areas that we’ve never been before and will never want to go again.”

Speaking on many of the same points, Marshall framed the current election season as a crucial time in the country’s history, saying the negative happenings of the last year were a sign the nation needed to regather itself and begin to correct course.

“As we look across the country, we certainly understand these are challenging times ...” Marshall said. “We have a virus that has ravaged our country, a virus that has created a physical hardship, mental hardship and emotional hardship as well as negatively impacting our economy. We think about the wildfires and riots going on across the country. The most powerful man in the world just got out of the hospital. And now, we have a Supreme Court justice that needs confirmed, as well. Certainly, God has my attention, and I hope He has your attention. I hope He has the attention of this nation.”

Marshall continued on to say he believed that the blueprint for returning the country to greatness could be found engrained in its long and storied history, comparing today’s challenges with those of the past. In closing, he promised to base his decisions in line with tenets held by America’s Founding Fathers and the many influential conservative voices before him.

“What I can offer you is a message of hope that the same values that got our forefathers through their challenges in life will get our generation through these challenges,” Marshall said. “Think about the challenges that our Founding Fathers had. President Washington and Jefferson, on to President Lincoln and even Reagan and all the people in between. Think about the values they possessed; values like faith and hope and hard work. Think about the great Kansans that have helped lead this country, keeping our nation and the world free … The values that carried them through will be the values that carry us through … I’m running to make sure that our kids and grandkids have the same shot at the American Dream that we’ve all had.”

For more on Marshall’s campaign for U.S. Senate, visit kansansformarshall.com.

Aim High, your VP prospect is a loyal SAN FRAN liberal,,who is "just a heartbeat from the President",,,,,,,,,,,,thought she showed her cards last night when she skated the question on "packing the supremes"..........cant imagine the blowback packing the courts will cause !! EVERYONE stay healthy .

I have to agree with you here, packing the court will cause as much blowback as picking and confirming a nominee in the middle of an election. Hopefully both sides will just agree to let the American people choose their next President and let that person fill the vacant seat. Republicans demanded Obama wait, and he did - for 8 months! Its only fair these compromises work both ways, especially in the middle of an election.

President Trump was elected to a four year term, not 3 years and 9 months. We will have to wait and see if a JUDAS senator sides with the demms.

So was Obama, hypocrite.

You do know the repubs controlled the senate when BHO was president.,,,,,he had no option but to wait...potus scotus and congress held in one party rule is dangerous.

Isn't anyone on here who can say that if there was a dem in the white house right now that they wouldn't try to push there candidate through before the election. They're all the same.

Rep. Marshall touts his medical credentials as a doctor. That being the case, he made a significant error in judgment in touting the efficacy of hydroxychloroquine for the prevention and treatment of Covid-19. Most medical professionals cautioned against promoting the drug but, spurred on by Dr. Marshall, the Trump Administration pressured the FDA for experimental use authority and even the President was mislead by Dr. Marshall's stance into believing that the Coronavirus pandemic could be quickly dealt with through the use of hydroxychloroquine, so much so that President Trump (along with Dr. Marshall himself) used the risky drug for 2 weeks. Such bad medical advice likely played a part in the President's belief that he was less likely to contact Covid-19 and thus mislead the President into believing that he would be safe to hold the event where he introduced Judge Amy Coney Barrett as his nominee for the Supreme Court. It is now clear that the event served as a "superspreader" for the virus which has hobbled not only the President and his wife but dozens of other top officials in the Whitehouse, the U.S. Senate, and the military's Joint Chiefs of Staff.

I don't plan to vote for cuz.Roger. I have always felt that there is something squirrely about a young man that goes to med. school, & specializes in female only ailments. I figure they must have not been popular in high school & college! Besides, he looks shifty enough that I wouldn't buy a used car from him.

AND that is why you want to turn the senate blue,,,,,,,gee i guess we have a different view of reality..........a blue wave would turn this country into a true mess,,,,,, can you imagine what china is planning if a blue wave occurs with biden as commander in chief ???

They're probably planning to sell us more goods at lower prices. Oh, what a mess that would be.

He should run for president with Roy Moore as his running 'mate'.

Aim high,,,enjoy your victories,,,,you will soon be able to reap your rewards of a socialist society that now knows they can vote themselves MONEY... WHOOOOO HOOOOO were bound for glory on the weimar republic train wreck.

Except Biden isn't a socialist, and nobody's campaigning to bring the kind of nazi socialism you're talking about to America. You're just repeating the same tired conservative propaganda as everyone else...

Actually democrat president Harry Truman DID nring Nazis to the US after WWII in what is known as Operation Paperclip. So the Dems do have a connection to the Nazis.

Those were smart Nazis. We needed them to design our rockets because no American knew a rocket from a sprocket. FDR had connections to the Nazis, too. In a way. He blew them off the map.

I'm a socialist. Very socialist. I'm so socialist I favor giving trillions of dollars out of the public till to businesses when profits are down, with no accountability. Yes I'm a pure socialist.

I'm surprised less than 20 people showed up... Lyon County normally has a decent turnout for these types of events... I think "normal" Republicans have finally grown tired of the noisy conservative bunch and President Trump, and have just lost the drive to show up and support these types of candidates. Several polls also seem to agree. It is refreshing to see these clowns wearing masks and social distancing... it's just too bad they waited this long to join the rest of America in fighting covid... imagine where we'd be today if this political group didn't spend the last 6 months whining about wearing a mask and the governors covid plans...

Barbara Bollier, who was a Republican up until Trump made being a Republican a bad thing, is way closer to a moderate Republican than Roger Marshall, whose campgain now labels Bollier as a "liberal". Saad!!

I don't know how you can label her a moderate when she introduced a bill to seize guns until you can prove your not a risk,(guilty until proven innocent), or the fact that she is in favor of late term abortions. She also says she's going to lower our health care. Last time demo's did that (obama care) heath care went up.

Or by the fact that she's in favor of late term abortions.

In 2018, Bollier became a Democrat and supported Governor Laura Kelly instead of conservative candidate (Kris Kobach)... Bolliers reason for the switch reads "Morally, the party is not going where my compass resides. I'm looking forward to being in a party that represents the ideals that I do, including Medicaid expansion and funding our K–12 schools."

As for your statement about seizing guns, SB390 didn't pass, but would have forced police or family members to ASK A JUDGE to issue an order to remove firearms from a person they believe poses an IMMEDIATE THREAT to themselves or others. The plaintiff would have had to appear with any witnesses in front of a judge before an ex-parte extreme risk protective order could be issued. Pro-gun people (with the exception of the crazy conservative GI Joe wannabes) shouldn't have a problem with putting a little due process between the police and their guns when there is currently none in Kansas.

Somewhat moderate. Lives in million dollar home and pays taxes worth more than most incomes in emporia

Too bad no one seized the guns from Adam Lanza and Patrick Crusius, ain't it?

Outlaw guns and only outlaws will have them

I’ll never understand why so many people vote against their best interest. Whenever a republican candidate talks about “forefathers” or “Founding Fathers” what they’re really talking about is keeping women and minorities in their place. “I’m running to make sure that our kids and grandkids have the same shot at the American Dream that we’ve all had.” The “we’ve all” being white males.

What are you running for?

Back to the 50s. The 1850s that is. Every time some goober praises 'old fashioned morality', ask them about 'old fashioned' cancer treatment.