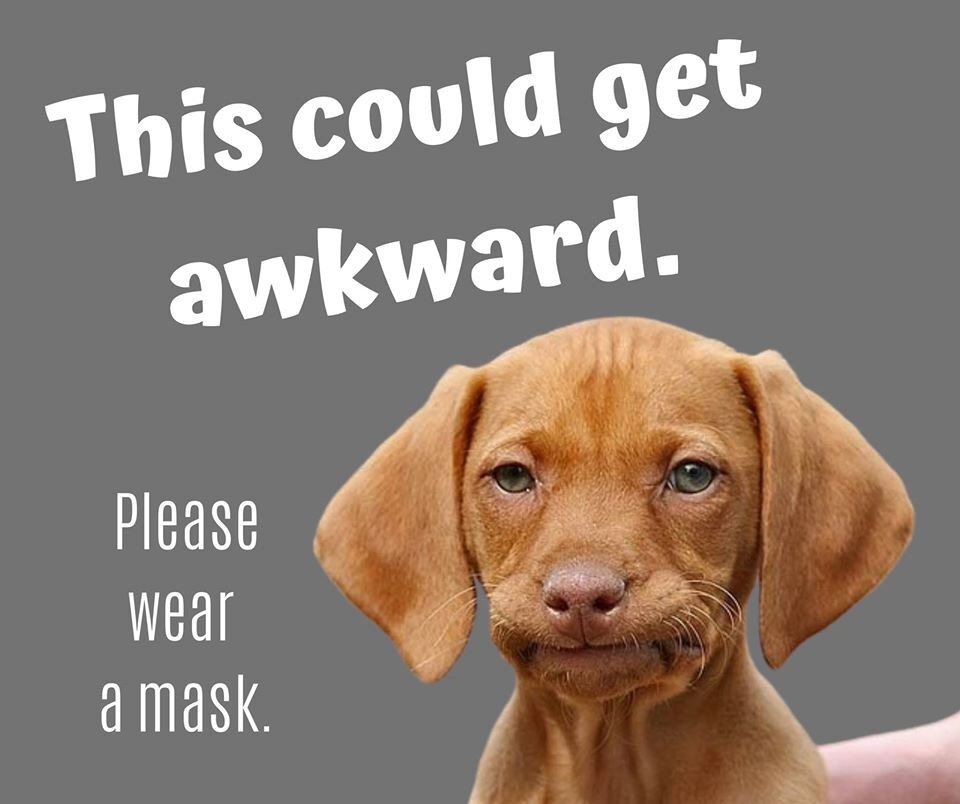 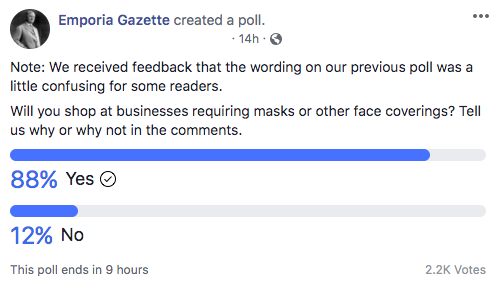 A poll conducted via The Emporia Gazette’s Facebook page shows the majority of respondents will continue to shop at stores that require masks.

A poll conducted via The Emporia Gazette’s Facebook page shows the majority of respondents will continue to shop at stores that require masks.

A number of local retailers and grocery stores are rolling out mandatory masks for shoppers this week.

Beginning Monday, Walmart is requiring face coverings in all of its stores — including the Emporia location. The policy was announced last week.

“From the beginning of the COVID-19 pandemic, our focus and priority has been and continues to be on the health and safety of our associates, members and customers,” Walmart said in a written release. “As the number of confirmed cases has spiked in communities across the country recently, so too have the number and types of face covering mandates being implemented.”

On Tuesday, CVS and Walgreen’s pharmacies will require face coverings.

Kroger — which owns the Dillons Food Store in Emporia — also announced a mask requirement last week. Masks are required at all Kroger-owned stores, including all Dillons locations, starting Wednesday.

Aldi will join the ranks next week. The grocery chain announced last week that shoppers will need face coverings beginning July 27. Associates have been wearing masks for months.

According to a poll conducted on The Emporia Gazette’s social media, 88% of respondents said they would continue to shop at stores requiring face coverings, while 12% said they would not.

More than 2,000 people responded to the poll.

While Lyon County did not opt into Gov. Laura Kelly’s mandatory mask mandate, the current public health order strongly encourages mask wearing and social distancing. Businesses are free to enact their own requirements.

On April 1, the Emporia City Commission narrowly approved an ordinance establishing a new offense in the city code related to the violation of public health orders. The ordinance — “Violating a Public Health Order” — makes it unlawful to disobey an order imposed by the Lyon County Public Health Officer, Lyon County Board of Health or Lyon County Director of Health. The offense is classified as a Class C misdemeanor, punishable with a fine of up to $500, up to one month of jail time, or both.

Gotta disagree with you Recurve. I think it is the store owners right to refuse service to ANYONE

I support your comment. There have been signs I have seen in stores: NO SHOES, NO SHIRT, NO SERVICE. Also, Store Owners, be they one person or a Walmart, they have the freedom to let in who they want--as long it is not discriminator against race, religion, etc.

Please make a PSA on how to wear a mask! It seems many don't understand.

Aim_High, once you happen to look up how 5g works, come back and play with the adults in the room. Even IF your batshit notions were more viable that an Ed Wood film, and we pretended that RFID chips were being implanted (they're not), go look up the problems with that premise just to make it even viable on a technical level. It's like saying that you can use a flashlight as a plasma emitter. The technologies are simply unrelated.

That flew over your head. It was sarcasm.

I looked up a plasma flashlight and they exist! Also the whole 5G thing is obviously a joke!

It takes business to finally do what our local government was too weak to do. Karens, please put on a mask. Pitching a fit at the store entrance isn't going to be a good look for you.

Of course requiring all to don a mask does not mean masks will be donned by all. Expect refusals by the obnoxious Karens who don't care if they infect others or not. As we have seen over and over, if you demand they wear a mask they will have a hissy fit and throw merchandise all over the floor. When that happens, we must identify them, determine where they work and then demand accountability from their employers. Why do they keep such unstable people on their payroll? Why do they employ people who cannot follow simple instructions and act as if rules are for others? Employees who ignore rules and throw fits are safety risks to their employers and to other employees. They likely create hostile environments that cost their employers plenty in terms of lost productivity and litigation. So when you enter any store nowadays, have your cameras rolling, not only at the entrance but within the store so you can capture proof.

Conservatives say: "That is their right!"

Store-owner says: "We refuse to serve anyone not wearing a mask."

Conservative Republicans have proven to not be very smart. They think a wall will stop everything and a mask will stop nothing. They love to say they are pro-life and that all lives matter, but the second their lives are slightly inconvenienced by needing to wear a mask, any consideration for anyone except themselves suddenly disappears. Saaad!

Next up: Wearing a mask violates ones deeply held religious beliefs. Find some biblical passage about vanity, false image or the like and then claim your religious freedoms are being violated. Don't even need written scripture. Seems that anyone can get out of any law or edict they don't like nowadays by quoting any such religious beliefs they can think of at the time. Since their beliefs aren't written down anywhere, they cannot be challenged.

I'll have to try that if I should get stopped for a Traffic Violation. I will just say that my God tells me it is against him, and I believe in him.

hell our beloved governor is at it again,it should be the right of the person not the retailers demanding or threatning

We have to wear seat belts, there's no smoking in most public places, yet you don't get during a pandemic, you have to wear a mask in public? YOU wearing a mask doesn't protect you as much as it protects others, so whether or not you CARE about your health, it's important you wear one. It's beyond common courtesy, it can be life-saving to someone else. WHAT is so difficult about putting on a mask while you go into public places?

I am amazed there are, not yet, any Republican comments against, that nobody can restrict their rights, Yes, this is Stronger than Government, because, every house, business can regulate behavior and procedures inside their own Home, business. I FULLY SUPPORT THESE BUSINESSES! Actually, I am selfish...in protecting my own HEALTH. I am 80...want to go on to be 90, then, on to 2040...when I hit 100! I believe I have a lot of good, wholesome contributions to make.

You're too much of a coward to rebut the truth, instead you just report comments to keep the truth hidden! Putin would be so proud of you Lukert!

Bill Gates, George Soros, and Hillary Clinton have secretly designed a nationwide facial recognition system designed to force vaccines laced with RFID chips that can be tracked with "5G" technology. This info will be used to take away everyone's guns. Wear a mask to foil their plot!

Well, I can't get in to talk to him, also, every time I call, I am told he is meeting with or talking with Trump. He gives Donnie Boy his orders every day.