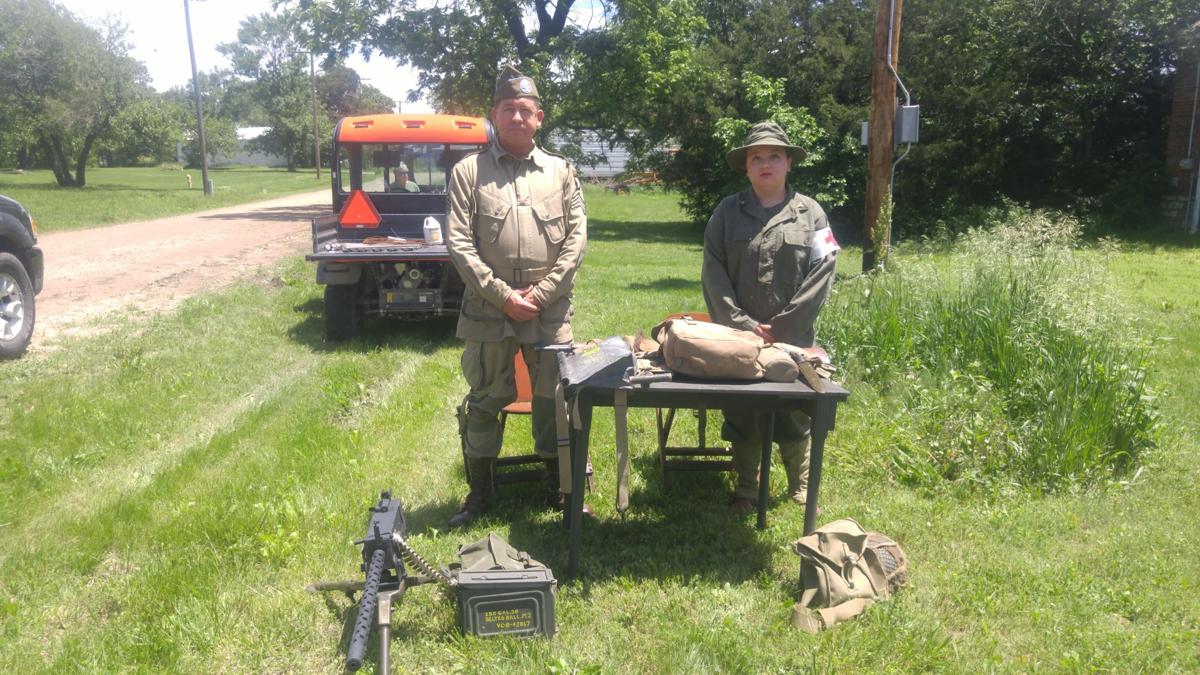 The smaller Lyon County communities are also enduring the effects of the novel coronavirus pandemic. The Gazette spoke with the mayors and city clerks of these communities to glean insight into how the small city, rural life is continuing.

2020 marks Reading’s sesquicentennial, and its birthday party has been postponed until gatherings are safer. Mayor Todd Hensley said Reading has seen a lot of things in its 150 years, “but I don’t believe we’ve ever seen anything like this,” he said. The community is resilient, though that is apparent whether or not the world is enduring a pandemic.

The local Miracle Cafe is offering curbside service, and the bank and elevator are still doing business. The local beauty shop and park are still closed, and “it’s kind of sad not to see the kids down there playing,” Hensley said. “We spent a lot of time and effort putting all of that stuff up, and now it’s closed off to them, but it will open back up, and kids will be able to go down and play again.” Otherwise, “Reading doesn’t have a lot to reopen,” he said.

The City office will continue to be closed to the public until further notice, as well as the community building, which is normally rented out almost every weekend. The city clerk and maintenance person, the only two city employees, are still hard at work and doing “a fantastic job,” Hensley said.

Community morale has changed and strengthened. Hensley said more people are outside walking and riding bicycles, which had been lacking in the past few years.

Reading does not have a grocery store, so residents travel to larger cities, such as Emporia, to do their grocery shopping. The limited store hours and stock are somewhat inconvenient, but residents make it work to the best of their ability. Hensley said the church blessing box is continuously filled.

As a mayor, he feels his responsibility to the community right now is to keep the city going.

Hensley is not yet sure about what to anticipate in regard to long-term effects of the pandemic. He doesn’t know what taxes coming in will look like long-term, but things that the tax money supports, like road work, may be waning for some time, as that tax money isn’t coming in. The city will not shut off services or charge late fees at this time.

“The saying, ‘We’re all in this together, apart,’ is a pretty good saying,” he said. “I think everybody here has been staying safe. The social distancing seems to be working. We’ll get through this together.”

Reading students have adjusted to remote learning, and the North Lyon County schools have been bringing in lunches for students.

Hensley encourages people to stay positive and reminds the community that we will come out of this pandemic stronger.

Bushong, with a population of roughly 30, is feeling the impact of COVID-19 in a different way than other smaller communities.

Many residents in Bushong work from home, and residents travel to larger surrounding communities including Council Grove and Emporia for their groceries and other business needs. The city is surrounded by Flint Hills trails, making one of the city’s leading attractions the outdoors, including the popular Veterans Memorial. Residents and visitors continue to take advantage of the space, keeping Bushong active in a time where other places have seemingly halted.

The Memorial Day celebration has been canceled, but the city is still putting a great deal of focus on improving the memorial site. Smith’s wife Dianne is making and selling personal protection masks and is donating the proceeds to help pay off the memorial. She has raised nearly $1,000 so far. The celebration, which attracted over 200 people last year, is tentatively rescheduled for sometime in July, pending any lingering safety restrictions.

“We kind of cut down on our events for the memorial,” Smith said. “We had to cancel quite a few of them, so that kind of hurt us.”

Other spring and summer events have been canceled, but Smith hopes to reschedule some of them, such as the car show. Bushong is also known for its military reenactments.

Otherwise, the trails have attracted more walkers and bicyclists. Visitors also often take time to look at the memorial. Smith says visitors and residents appear to be practicing safe social distancing, even outdoors.

Nobody in Bushong has contracted the novel coronavirus. Smith said residents have stayed positive and informed during this time, but the city is “looking forward to [getting] back together and [being] able to have our events, because they’re a lot of fun,” he said.

“As far as the virus goes, if it goes down and we can get people together, we have a lot of events we want to try to get in,” Smith said. “We’ve still got our hopes up.”

City of Bushong personnel have not had any official city meetings since the stay-at-home orders but still maintain the behind-the-scenes work involved with running Bushong. They are putting effort into cleanup to attract more visitors in the future.

Smith does not anticipate long-term effects from the virus. Some construction has slowed down in the short-term.

Bushong does have other long-term plans for improving the city to bring more people in. In the future, the bank will reopen as a museum. Bushong is proud of its history and would like to share it with locals and visitors.

In the meantime, everybody is trying their best to help one another however they can at this time.

“Everybody communicates with everybody, and we know what’s going on around town and help each other out,” Smith said.

Mayor Charles Eastman said Allen is continuing life fairly normally. Everyone is staying home and taking safety precautions when they go out.

Business is similar to the other small towns--the local restaurant and senior center have been doing curbside service, and other businesses are still functioning without in-person interactions. The post office is still accessible.

The City of Allen has limited its city council meetings to ten and shares the meetings on Facebook. Eastman has transitioned some of his responsibilities as mayor to the city council as he fights cancer.

No annual events were affected.

The City of Olpe is also functioning similarly to other cities, as far as city functions go.

The Chicken House has been offering curbside service, and Murphy Oil closed for deep cleaning but has now reopened for some in-person purchases. The bank lobby is closed but will open for appointments only.

“I hope we [reopen] slowly,” City Clerk Joyce Wilson said. “I think the plan the governor’s put forth is probably about the best we can do, knowing that if things change, if things get worse or anything, we can always revert back to more distancing.”

The school closure was cause for adjustments to remote learning, and Wilson said her school-aged grandchildren miss going to classes.

Overall community morale is positive. Locals and visitors have been supporting the local businesses and each other. Somebody told Wilson they paid one of the salons in advance for future haircuts.

The City of Olpe is also trying to keep things as normal and as upbeat as possible.

“I think people need to be informed about what they’re doing — wearing masks and the social distancing, I think they need to continue doing that,” Wilson said.

She would like people to understand that the pandemic is a serious problem and should be approached safely and reasonably. It is challenging, but if it is not approached with seriousness, the same issues may be present come the fall and beyond.

There are still many uncertainties about the future of community events, because even if the state and county allow gatherings again, Wilson does not know if coordinators will be able to properly prepare, nor does she know if people will be interested in attending.

People are encouraged to continue supporting local businesses while staying aware of the needs of and the safety recommendations at each location.

City Clerk Marcia Johnson said Americus is trying to “keep things as normal as possible” while also staying safe. The city’s responsibilities to residents have not changed, but some of the methods of provision have.

For example, instead of handling payments face-to-face, a deposit box is utilized. The city employees are moving forward in their normal duties, including taking care of the parks and mowing, and they are taking safety precautions to keep themselves and Americus residents, totalling 885, safe.

Local businesses have been navigating what it’s like to run while closed, as well as what to consider while reopening in ways they feel comfortable.

“We are very proud of Harry and Lloyd’s and Rolling Hills,” Johnson said. “They’ve been doing great at curbside and keeping very positive attitudes through this all.”

Johnson said these two businesses in particular have helped keep the spirits up in Americus.

One evening, a local musician sang outside of Harry and Lloyds, serenading customers as they pulled up to pick up their orders.

“We are trying to keep everything moving forward and not letting the COVID put a damper on it,” Johnson said.

The bank and Casey’s are also open.

Americus is following Lyon County’s safety orders and stays up to date on what other Kansas municipalities are doing in response to the pandemic. There are weekly League of Municipalities meetings via Zoom that help inform the city on what is happening at a state level, too.

Johnson hopes for no long-term effects on Americus, though the city is also not blindly tossing caution to the wind either.

“There will be effects,” she said. “We’re just hoping they’ll be a new normal or maybe just a change in the stream on how we’re doing things. We’re not going to let the COVID-19 shut us down or anything. We may just change the direction we’re going and do it a different way.”

A few local fundraisers have been postponed, including the fundraisers for a new baseball field. The Americus Day celebration was not yet scheduled and therefore not affected.

Easter was affected in a way that may impact Americus well into the future. Instead of the annual Easter egg hunt, the Easter Bunny sent letters, coloring books and confetti to the children in the mail.

The most rewarding aspect is “seeing how everyone takes care of everyone else,” Johnson said. What has been most challenging for the City of Americus is not seeing residents while still trying to make them feel welcome to work with the City.

The best way for non-Americus residents to support Americus is to visit the local businesses.

On behalf of the City of Americus, Johnson thanks everyone for their support and care. She looks forward to when the community can gather to celebrate one another.

Would of been nice if Neosho Rapids and Hartford could of been included in this story. But as usual the Gazette doesn't seem to remember we are Lyon County also.