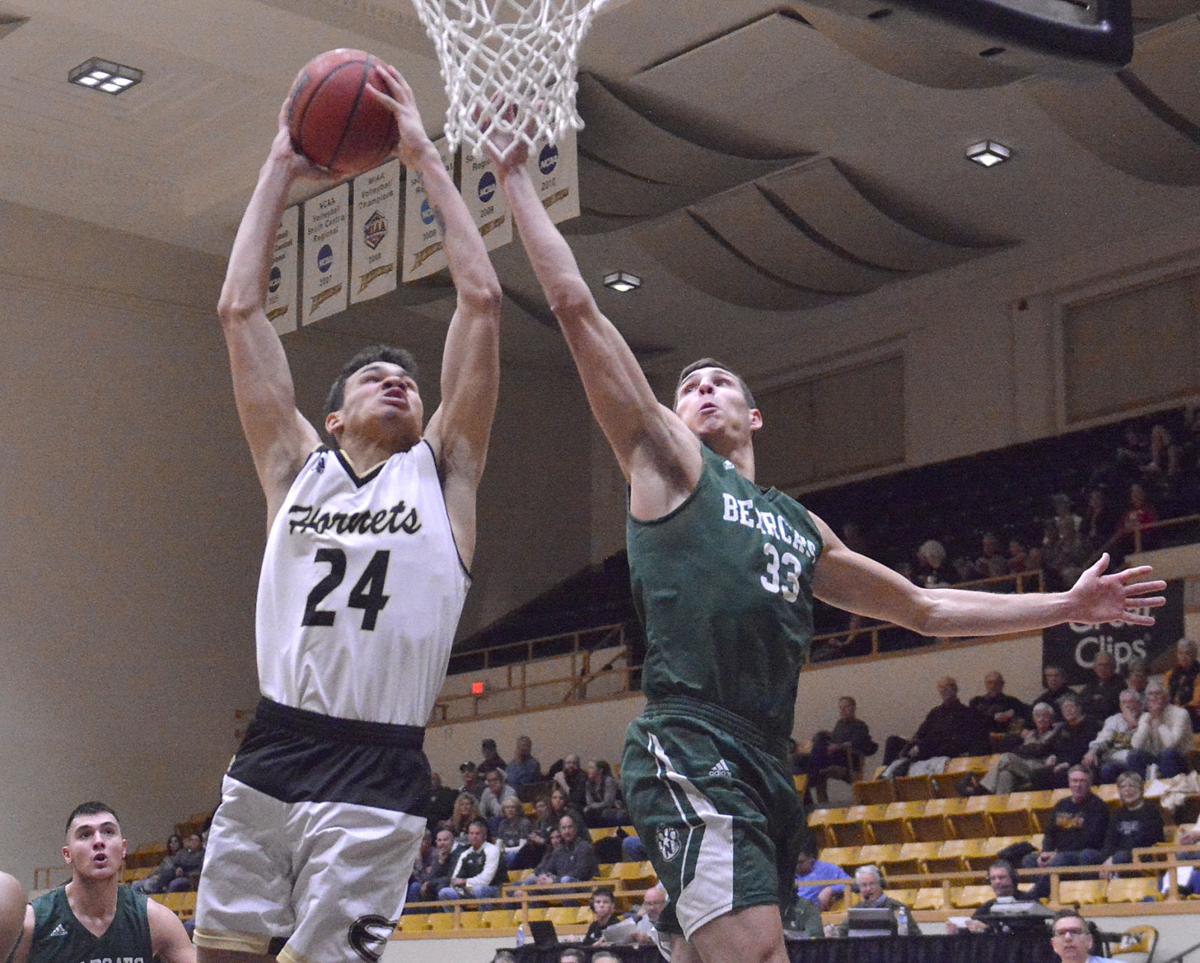 ESU’s Brendan Van Dyke (24) goes up for a dunk against Northwest Missouri’s Ryan Hawkins (33) during the second half on Thursday. Van Dyke scored 14 points on 6-of-7 from the floor. 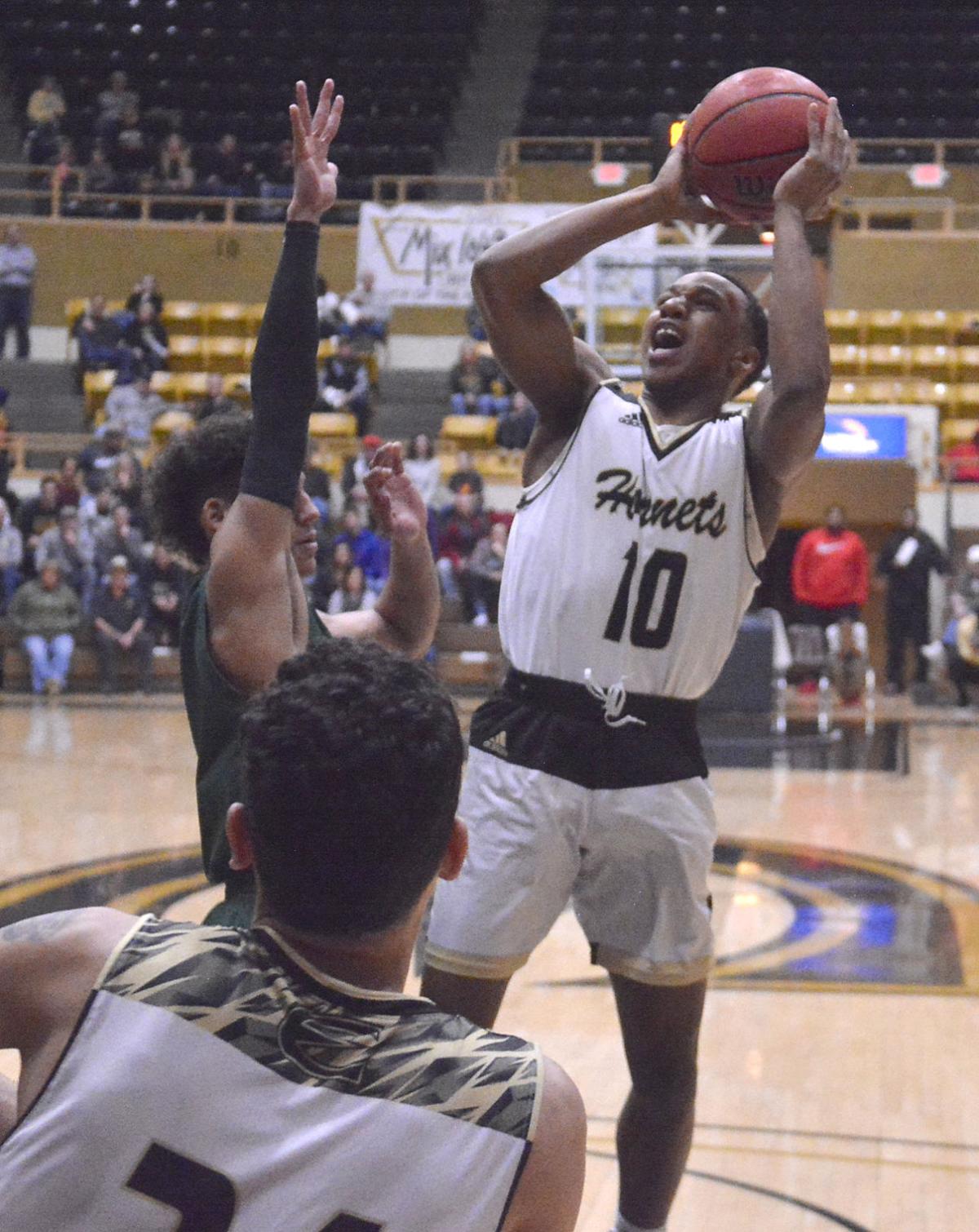 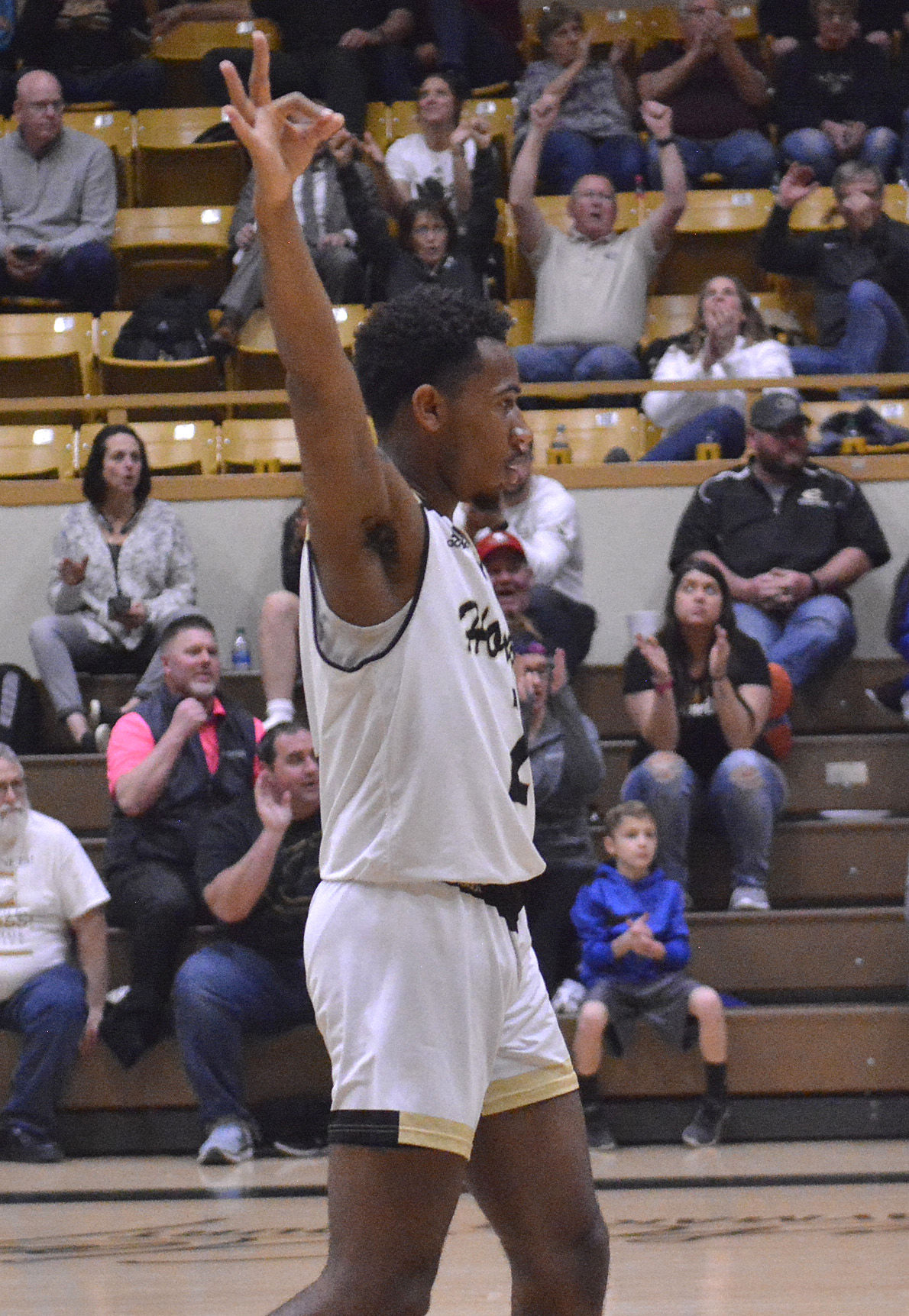 Emporia State freshman Keyon Thomas (3) signals after the Hornets scored a 3-pointer late in the first half of Thursday’s 71-56 loss to No. 2 Northwest Missouri State. 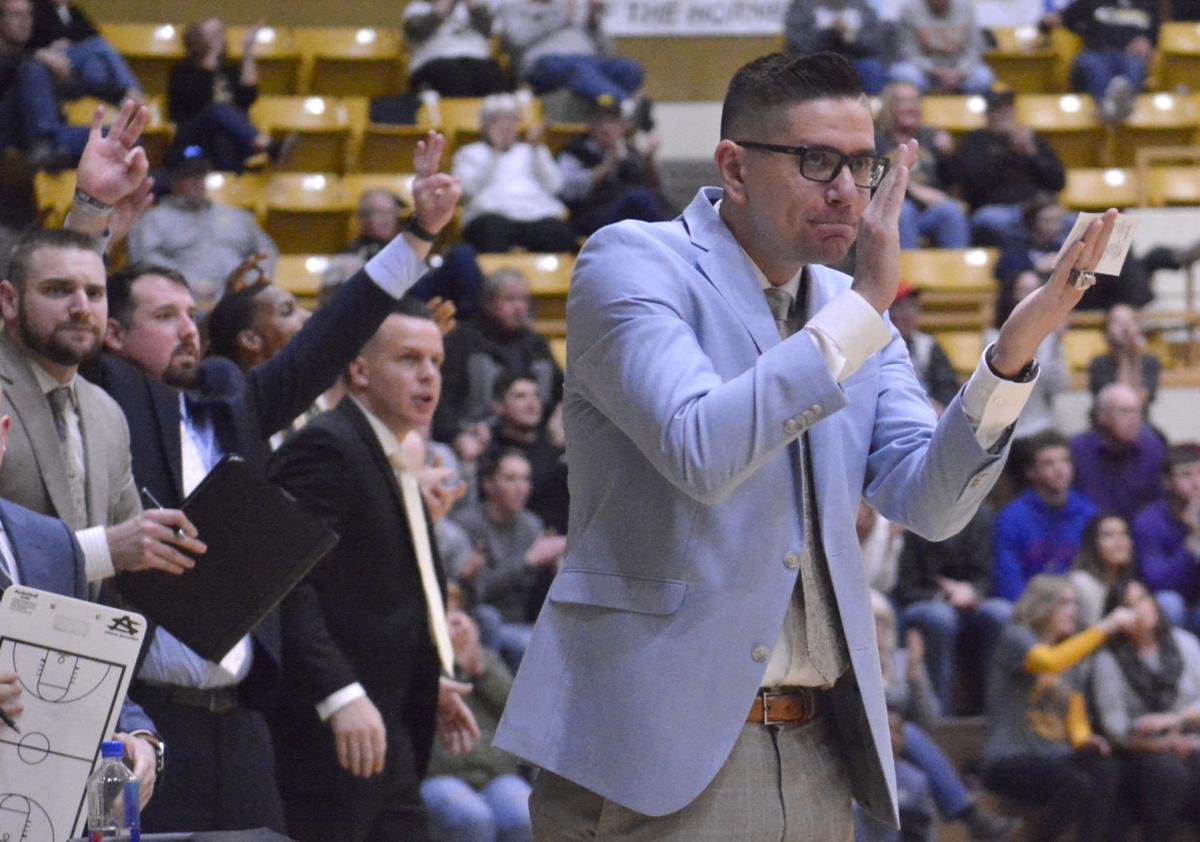 ESU’s Brendan Van Dyke (24) goes up for a dunk against Northwest Missouri’s Ryan Hawkins (33) during the second half on Thursday. Van Dyke scored 14 points on 6-of-7 from the floor.

Emporia State freshman Keyon Thomas (3) signals after the Hornets scored a 3-pointer late in the first half of Thursday’s 71-56 loss to No. 2 Northwest Missouri State.

He looked at the shooting percentage and the made field goals, two columns that the Hornet men led No. 2 Northwest Missouri on Thursday night, even though it was the Bearcats who cme away the winners, by a 71-56 margin.

It resembled the last time his team faced the Bearcats, when ESU went toe-to-toe with the top-ranked team in the country in the MIAA Tournament quarterfinals a year ago, falling by three points, in spite of being more efficient in the flow of play.

The biggest difference then? NWMSU had twice as many free throws as Emporia State.

On Thursday? NWMSU scored 19 points from the line, while ESU only made six attempts from it.

“This is almost the same song and dance as when we played them at the (MIAA) Tournament last year,” Doty said. “We outshot them, we shot a better percentage in the field than them, it came down to decisions made by ... some of those things are in our control and we’ll take responsibility for everything with our student-athletes, we’re not going to play the victim card here. We’ll also go to bat and fight for our guys during the game, we’ll fight for them after the game as we look at different things that are out of our control, that aren’t leaning in our direction for certain situations.”

The foul totals themselves weren’t a gross mismatch, 16 to 13, but the free throw spread was too much to overcome.

ESU trailed by no more than seven through the first 25 minutes of play, but consecutive baskets from Brendan Van Dyke in the second half, the first a smashing dunk he took up the lane himself, sparked the Hornets back within one at 40-39.

Then, the culmination of a game-long physicality and frustration turned into a pair of technical fouls issued against the Hornets with 15 minutes remaining awarding the Bearcats six free throws, all of which turned into points.

“We still battled, despite of those technical fouls,” Doty said. “Both teams were chippy the whole time. They’re just going to hand-select somebody to give a technical for ... and that’s why I got one.”

Even after that, ESU managed to whittle its deficit back to two before the Bearcats stretched their lead to double-digits for the final 10 minutes.

“Nothing’s going to be handed to us,” Van Dyke said. “We’re not (a) team somebody’s just going to give us any call we want. We really have to work for it. We all have that mentality, we all worked for what we’ve got now and we’re real grateful that we have it and don’t want to lose it.”

“Our guys battled back and closed that gap again,” Doty said. “Ultimately down the stretch, we’re still looking for an identity scoring the basketball against really high-quality defensive teams. We need to find some answers. We have other guys, as they continue to grow and (experience) MIAA play and go from freshmen to sophomores and sophomores to juniors and so forth, they’re going to be very dynamic too. We’re still developing, we’re going to hang our hat on defense — and again I thought we played really well defensively for 30 minutes. Those last six, seven were a struggle for us.”

NWMSU continued to run primarily with its starters, using just six players, three of which were on the court for the entire 40 minutes. ESU attempted to pick and choose spots to maximize its lineup, including allowing Dallas Bailey and Gage McGuire — who had just three combined starts this season — to not only start but log hefty minutes.

“We went position-less to start the game,” Doty said. “We ... wanted to be able to switch their ball screens with not only Diego (Bernard), but also with Trevor (Hudgins) and with Ryan (Hawkins) so we could just switch all of those and not have a mismatch.”

But even amply rested, the Hornets wore down late as the Bearcats finally found their footing.

“We talked about this being a boxing match and us wanting to wear them down,” Doty said. “The one thing Northwest Missouri does a really good job of is late in games making shots. It doesn’t make sense to a ton of coaches, because their guys who make all their shots down the stretch have never left the floor. We try to run some false motion on offense to get those guys chasing, to get those guys having to play defense in the half-court. We crashed all five guys throughout the night hoping it would entice them to get the ball out and run a little bit and they didn’t want to do it. They have really good game plans, they scheme well and this is one of the best defensive teams in our conference as well. They’re a (top) ranked team in the country each of the past three, four years for a reason. We don’t care about that stuff when the ball’s tipped. We care about competing every possession. I thought we did that for 30 minutes tonight.

We’ll go back to a traditional lineup moving forward, but this was the best chance we had to defend their action and (that was visible) in the first half, especially to start the game off, some of those defensive possessions were some of the best we’ve had all season.”

The Hornets fell to 2-2 in MIAA play and are scheduled to host Missouri Western on Saturday afternoon.

“It showed we could really compete with anybody,” Van Dyke said. “If we’re playing together and ... hitting our shots and playing defense just how we were, we’re a scary team.”