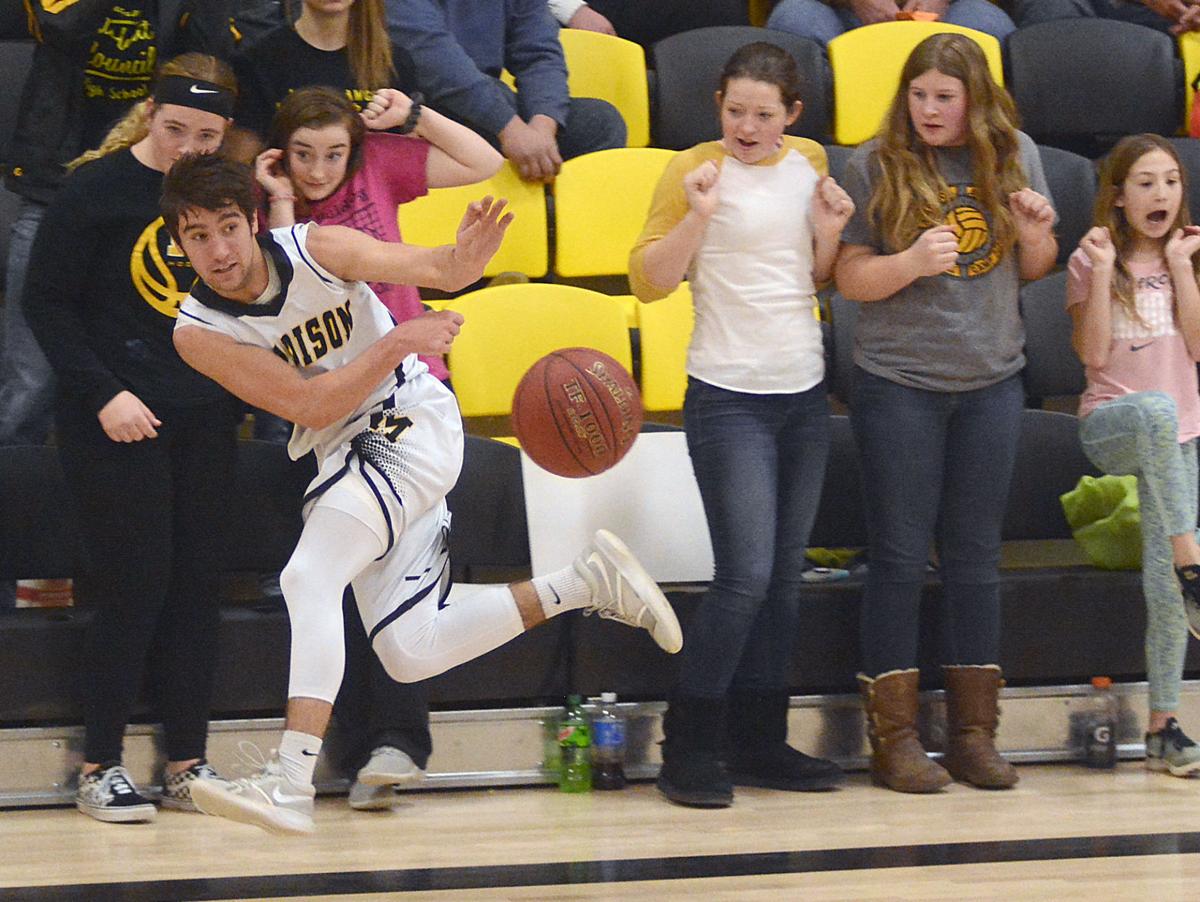 Madison’s Nasun Wasson (10) saves a ball from going out of bounds during the Bulldogs’ game with Mission Valley on Tuesday night. 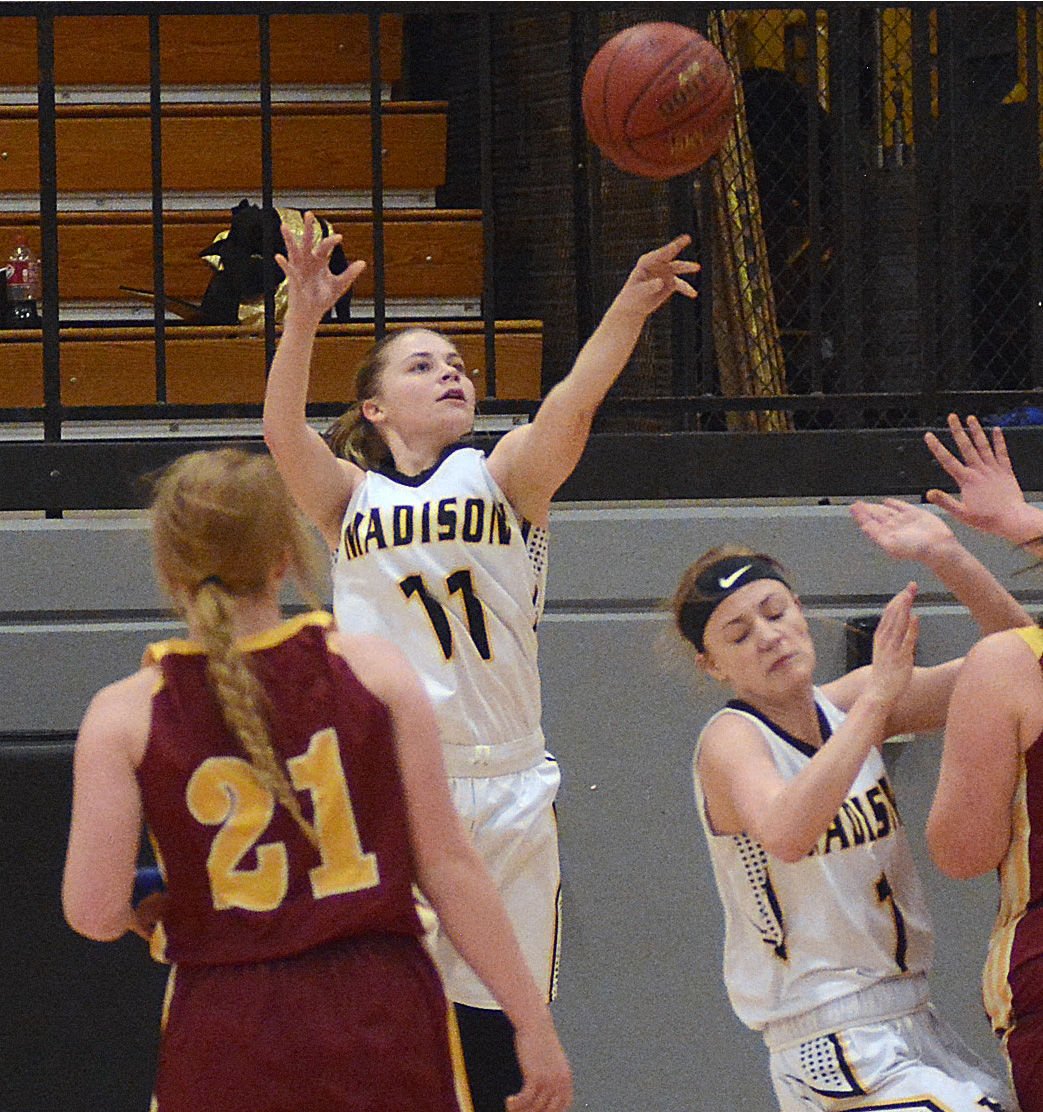 Madison’s Taylor Williams (11) scored 20 points on Tuesday night, including a trio of 3-point shots in the second quarter that gave the Bulldogs the lead. Mission Valley won, however, 48-46. 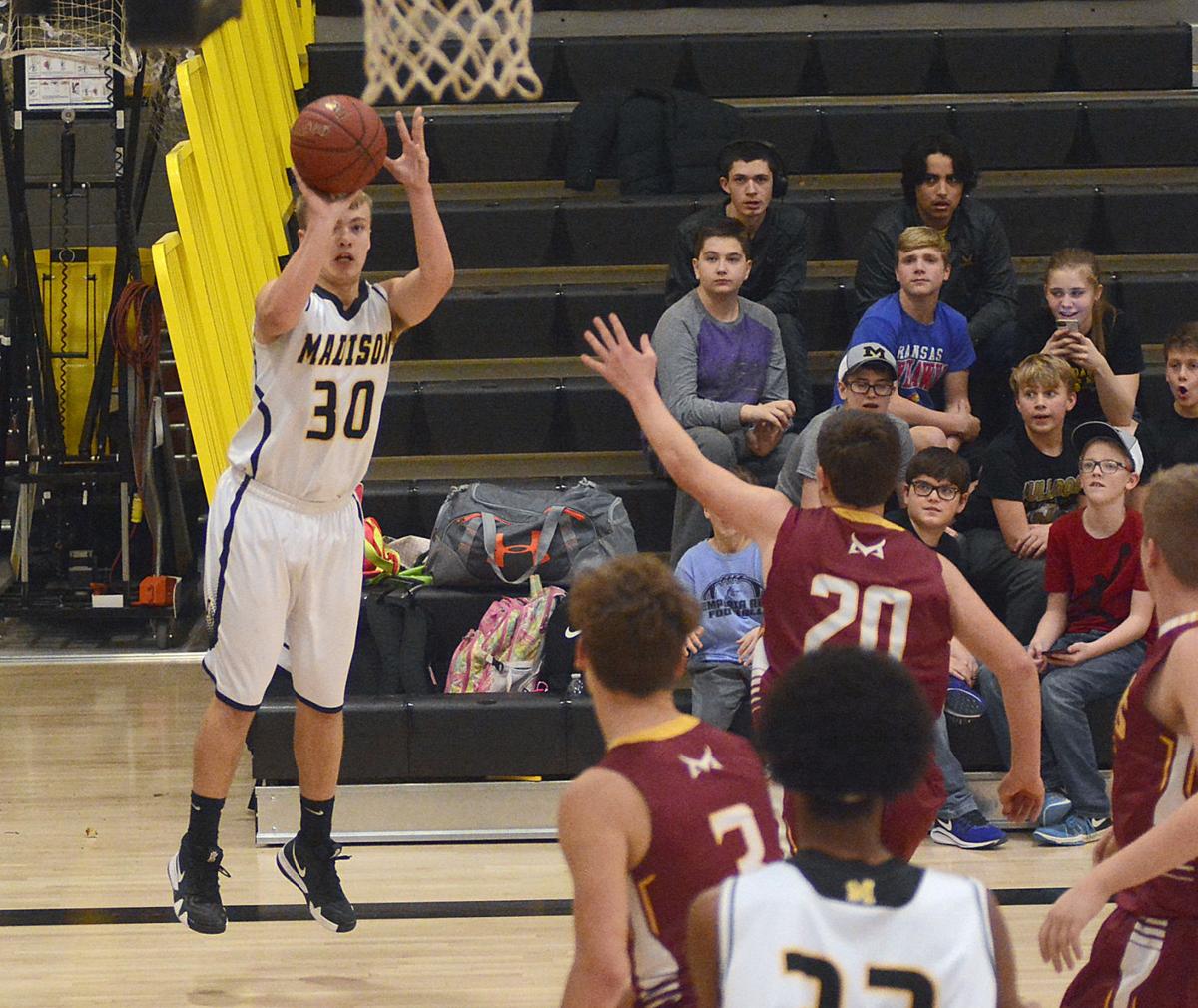 Madison's Chase Harrison (30) scored 27 points for the Bulldogs, 17 coming in the first half of Mission Valley's 68-58 win on Tuesday night.

Madison’s Nasun Wasson (10) saves a ball from going out of bounds during the Bulldogs’ game with Mission Valley on Tuesday night.

Madison’s Taylor Williams (11) scored 20 points on Tuesday night, including a trio of 3-point shots in the second quarter that gave the Bulldogs the lead. Mission Valley won, however, 48-46.

Madison's Chase Harrison (30) scored 27 points for the Bulldogs, 17 coming in the first half of Mission Valley's 68-58 win on Tuesday night.

MADISON — Both Madison basketball teams had second quarters to remember on Tuesday night.

They also had second halves to forget.

Mission Valley left town after claiming a sweep over the Bulldogs, 48-46 on the girls’ side and 68-58 on the boys.

There aren’t many high school contests that will feature a 20-point swing in a single quarter.

The Madison girls made it happen in their first game following a third-place finish in last week’s Lyon County League Tournament.

It was the Vikings that did the earliest damage, leading throughout the first quarter, boosting their advantage as high as 10 on an early possession in the second, at 17-7.

The Bulldogs had an abrupt answer, closing out the period with a 20-2 run, including a trio of 3-pointers by junior Taylor Williams. The first came with 3:30 left in the half and pulled Madison within three. The second was almost two minutes later, which broke a 19-19 deadlock. The third was the Bulldogs’ next trip up the floor, after a Viking turnover, finding Williams in the same spot off the left elbow in transition to put her team up six.

“Anytime you can hit three threes in a row, like Miss Williams did for us, the momentum will shift,” Madison head coach Vanessa Kresin said. “She did a good job of shooting the ball this game.”

Emily Farrow ended the run and the half, with a runner from the elbow at the buzzer.

The storm of scoring left a buzz in the gym as the teams vacated to the locker room.

That life was difficult to recoup.

“We tried to prepare them,” Kresin said of the halftime discussion. “We had our run. They’re a good team, they’re going to come out and have their run. You have to weather the storm. We have to understand that’s going to happen and we have to find a way to be able to combat that offensively. We have to be able to counter that run.”

Madison wasn’t able to gain any traction on the offensive end after the break, only scoring on a pair of free throws in the final 40 seconds. By then, MVHS had retaken the lead at 32-29 heading into the final period.

The Bulldogs also had a handful of turnovers on inbounding plays that were turned into instant points by the Vikings.

“(It wasn’t) so much that they turned us over as much as it was us turning ourselves over, but I think that plays into our overall lack of experience on the court,” Kresin said. “The girls make up for it with their effort and their hustle and not letting plays like that drag them down.”

Madison twice tied the game in the fourth, but never held the lead. A 3-pointer from Mission Valley’s Hope Martin extended the Viking lead to 39-34 with little more than three minutes to go.

From there, Madison battled to stay alive, but every time the Bulldogs gained ground, the Vikings had an answer.

Williams hit a three from the top of the arc, with a second to play, to close the gap to the final.

She finished with 20 points on the night.

“I tell her, in order for the ball to go in the basket, you have to shoot the ball,” Kresin said. “She’s finding her rhythm and her role on this team and she’s doing some big things for us.”

The Bulldogs will look to return to form on Friday night at Northern Heights.

The Madison boys leaned hard on Chase Harrison’s hot shooting in the first half of their game with Mission Valley on Tuesday night.

So when Harrison’s shots became few and far between, and the scant ones he got up stopped falling, it became a long second half for the Bulldogs.

The Vikings overcame a nine-point deficit at halftime and went 20-for-27 from the free throw line in the fourth quarter to pull away with a 68-58 victory.

“This was a tough loss,” Madison head coach Brett Dannels said. “I felt like our kids played real hard tonight, we just couldn’t get things to end in the fashion we wanted it to.

The two teams were tied at 19 after the first quarter, after Madison pulled in front quickly, leading by six on two occasions.

From there, Harrison, who already had eight points, more than doubled that total, with a pair of treys and a reverse layup to give him 17 and his team an eight-point advantage going into the intermission.

The Bulldogs’ offense dried up in the third and Mission Valley picked up some steam. Madison scored six points on free throws and made just two field goals before a transition 3-pointer by Austin Watts led into the fourth.

“They stepped up their defensive intensity in the third quarter and that was a difference in the game,” Dannels said. “For the longest time, we’d only scored five points and then we went on a little run at the end. The thing that I felt like we didn’t do well offensively in the third quarter was we stopped dribble-penetrating and kicking. We stopped throwing the ball into the post, so the post could attack and kick the ball back outside.

“That’s where we were getting our looks in the first half.”

While the Vikings mounted their comeback, Harrison had become relatively silenced, with only a free throw to his name from the half until the final two minutes.

By that time, MVHS had not only taken the lead, but stretched it out, 60-50. Back-to-back Harrison trifectas cut into the Bulldog deficit, making it a five-point game, but while the Vikings took six trips to the charity stripe in the final minute-and-a-half, Madison couldn’t’ find another shot to close the game.

Harrison finished with 27 on the night, while Drew Stutesman scored nine.

“I challenged them to come out tonight, step up and play with an intensity that we haven’t played with for probably two weeks and I felt like they did that,” Dannels said. “Unfortunately, we didn’t put a complete game together and it cost us the victory.”

The Bulldogs will travel up Highway 99 on Friday to play at Northern Heights.