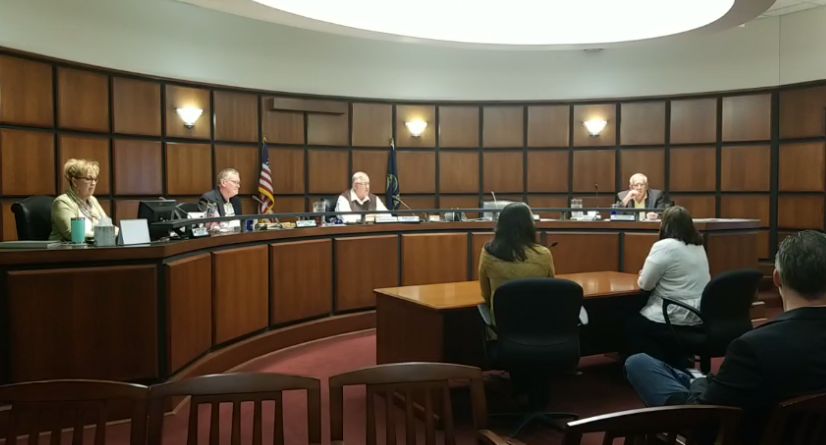 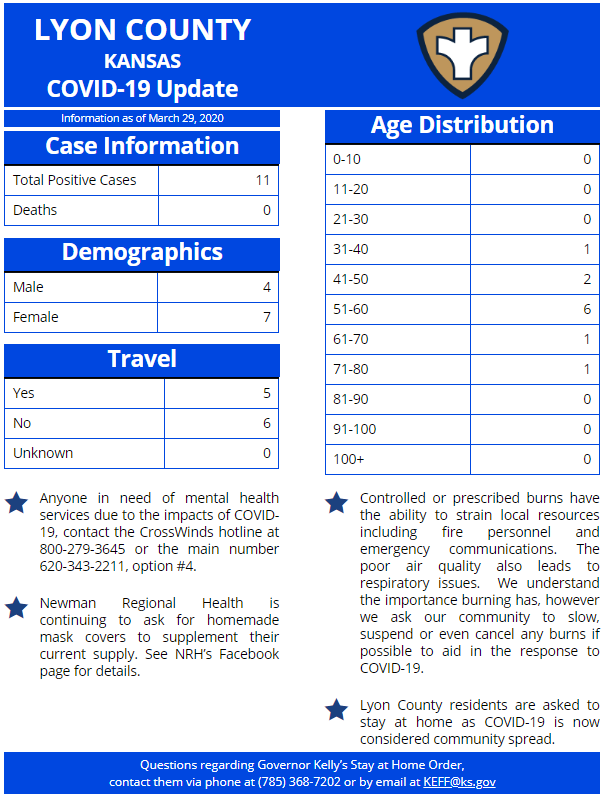 A portion of distributed personal protective equipment was locally donated. Thank you Lyon County for keeping our first responders safe.

There is a reduced availability of personal protective equipment across Emporia and Lyon County."

A portion of distributed personal protective equipment was locally donated. Thank you Lyon County for keeping our first responders safe.

There is a reduced availability of personal protective equipment across Emporia and Lyon County."

Lyon County’s response to the COVID-19 pandemic dominated much of the conversation during Thursday’s meeting of the Lyon County Commission.

County Controller Dan Williams approached the commission with a request for extra funding for the emergency operations center as it continues to work through the pandemic. The funds would be used for supplies and other needs as they arise. Setting up a fund for such purposes required approval by the county commission.

“During a situation like this, they might need to move quickly to make some of these purchases,” Lyon County Commissioner Scott Briggs said.

He also said it was important to note that there were funds available from sales taxes collected within the county to set aside for emergencies. A special fund will be set up so that the amount can be easily tracked, as the county will be eligible for reimbursement from FEMA after the pandemic is over.

Briggs and Commission Chairman Rollie Martin approved funding in an amount not to exceed $50,000. Commissioner Dan Slater was not present at Thursday’s meeting.

“That is our ‘A-team,’” Martin said. “They have done a very, very good job getting information out to the public.”

Later in the meeting, Hively, Milbern and Fells came in front of the commission to give an update on the COVID-19 response. Thursday, a stay-at-home order was put in place, meaning residents are to remain in their homes unless going to or from work or they are attending to another necessity.

“I think people generally want to do the right thing,” Hively said. “I think, for the most part, people are trying to do their part in slowing the spread of this virus.”

She said the response effort, since March 2, has so far cost about $56,000, with many FHCHC staff members re-allocating their efforts to focus on the pandemic. She said right now they are trying to do their part with the pandemic while also adhering to their usual duties, meaning some are essentially working two jobs.

Milbern said FHCHC has a spot on its website, flinthillshealth.org, for residents to ask questions regarding the virus. There are, she said, about six pages worth of questions that medical professionals have been working on answering. She expected that document to be put up for public viewing Thursday afternoon.

Fells said the group is continuing to work together with community organizations to mitigate the spread of the disease. He added that the county has a good supply of N95 safety masks, but it is in need of surgical masks. Milbern added that there have been several donations of surgical masks for first responders, for which she thanked the community.

“Personally, from my side, I think you’re doing an awesome job,” Briggs said. “I’ve been through — nothing this serious, but I was telling the chairman earlier, now is not the time to be critical of anybody doing their jobs, because you’re out there on the front lines. If there is going to be second-guessing, that should be after all of this is over when we do our walk-through of, what would we do different? It’s a community effort right now. I’m very pleased, very proud of the job you guys do.

“It’s a lot of long hours. I don’t think people realize that. You don’t go home and sleep, because you go home and think about what you have to do next and things you may have missed during this. I get that, and I know it’s stressful for the employees; which you really need to take care of yourselves, also.”

He went on to ask Hively and Milbern to make a prediction on how the virus is going to continue to impact the community, and for how long.

Though Hively said she did not have a crystal ball, she said there are some trends that allowed her to make educated guesses.

“We have four cases in Lyon County, and the way things look and have played out, ... we’ll probably have at least eight cases by Monday, and then those are just going to double from there,” she said.

Milbern went on to say that estimates show for every one case that is identified, you likely have around 50 cases that are unidentified.

“That’s why these social distancing orders are so important,” she said. “If you’re isolating people and they have come in contact, hopefully we can start to slow that spread.”

Fell added that Lyon County Public Health is planning to do a 3 p.m. report on its Facebook page every day to give updates on the status of COVID-19 in the county.

Martin again thanked the group for their hard work and relayed his trust in them to make the right decisions based on their professional knowledge.

“I can’t imagine having a better team right now than what we’ve got,” he said.

• Gave County Engineer Chip Woods approval to sign a memorandum of agreement between Lyon County, the Kansas Corps. of Engineers and the Kansas State Historical Society to place Rocky Ford Bridge — commonly referred to as “Bird Bridge” — on the National Register of Historic Places.

The move was made, at least in part, so that repairs can be done on another bridge in northwestern Lyon County. In order for work to be done on the registered historic bridge, it must be replaced on the list.