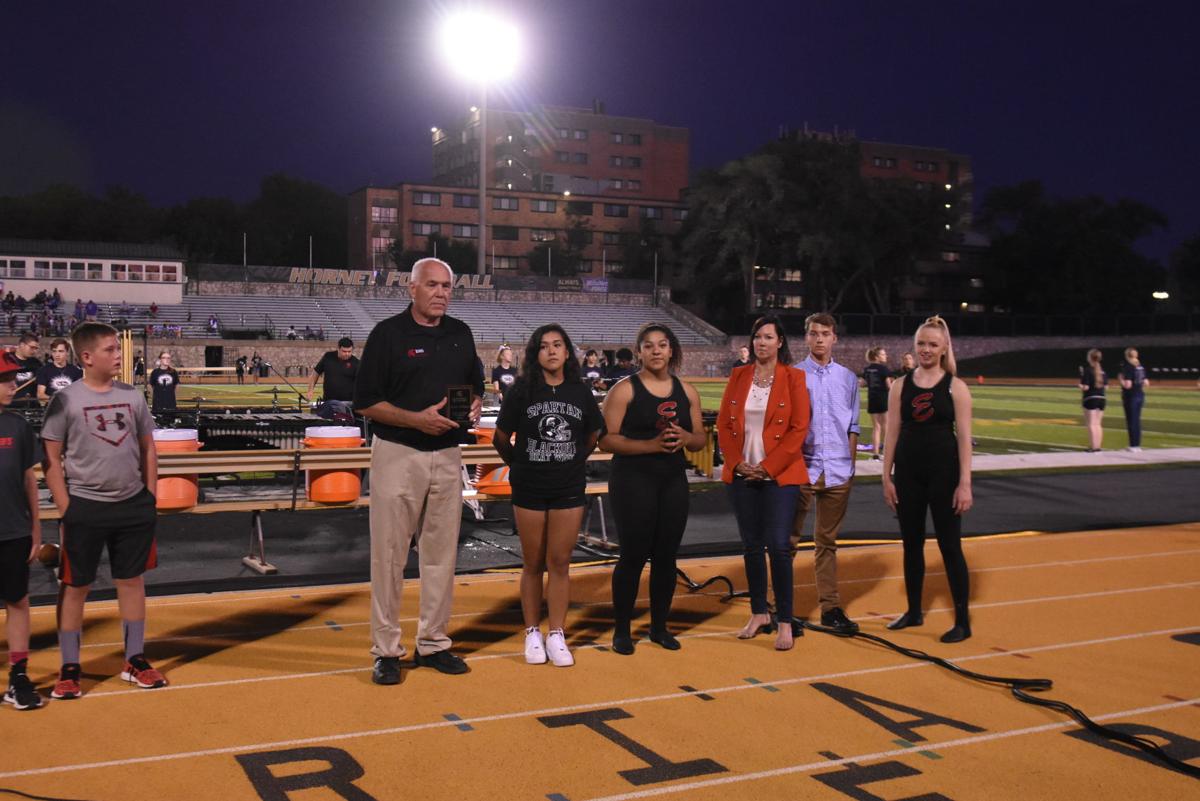 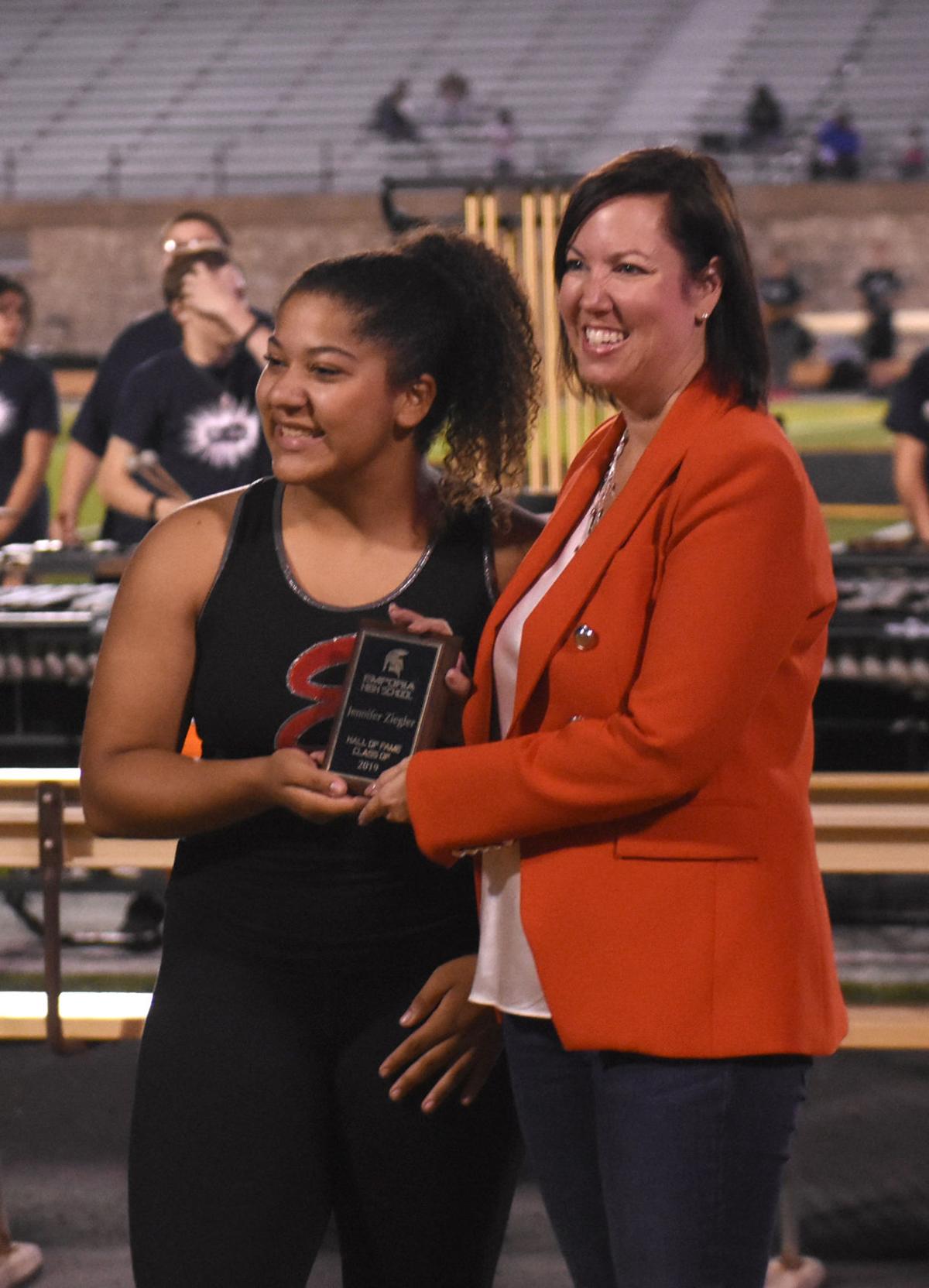 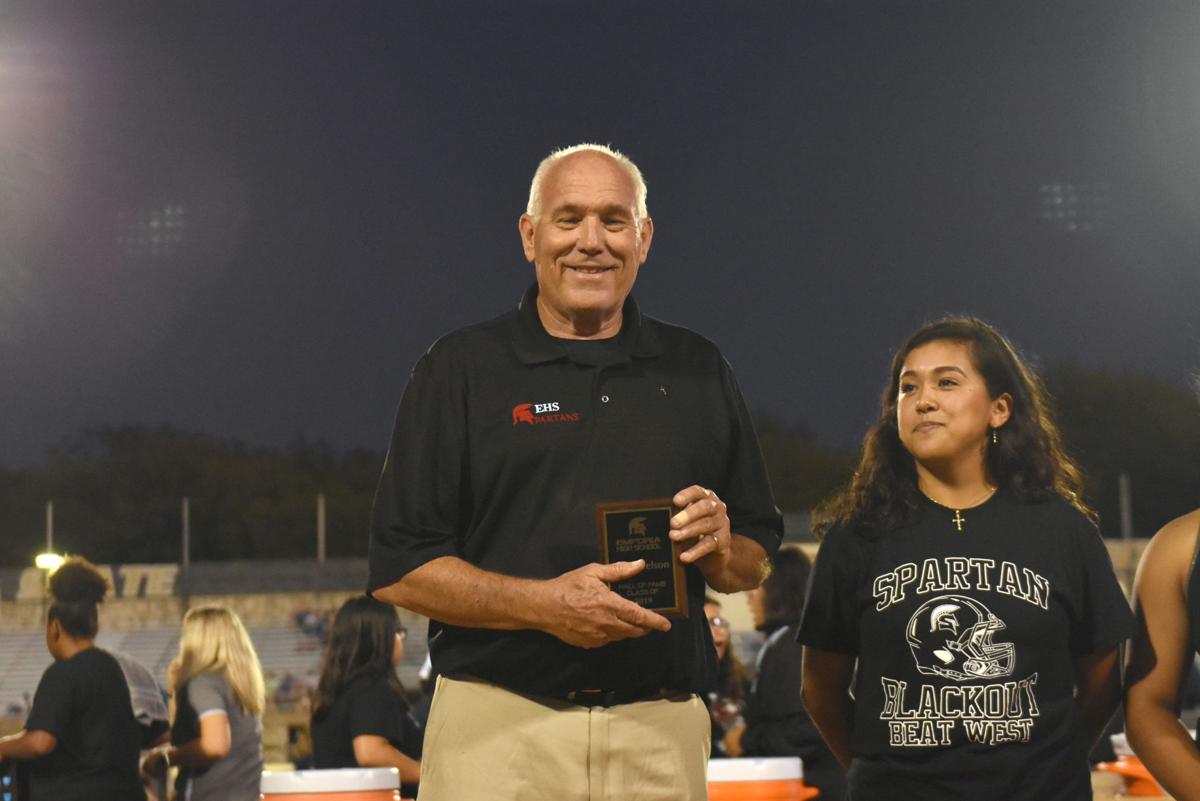 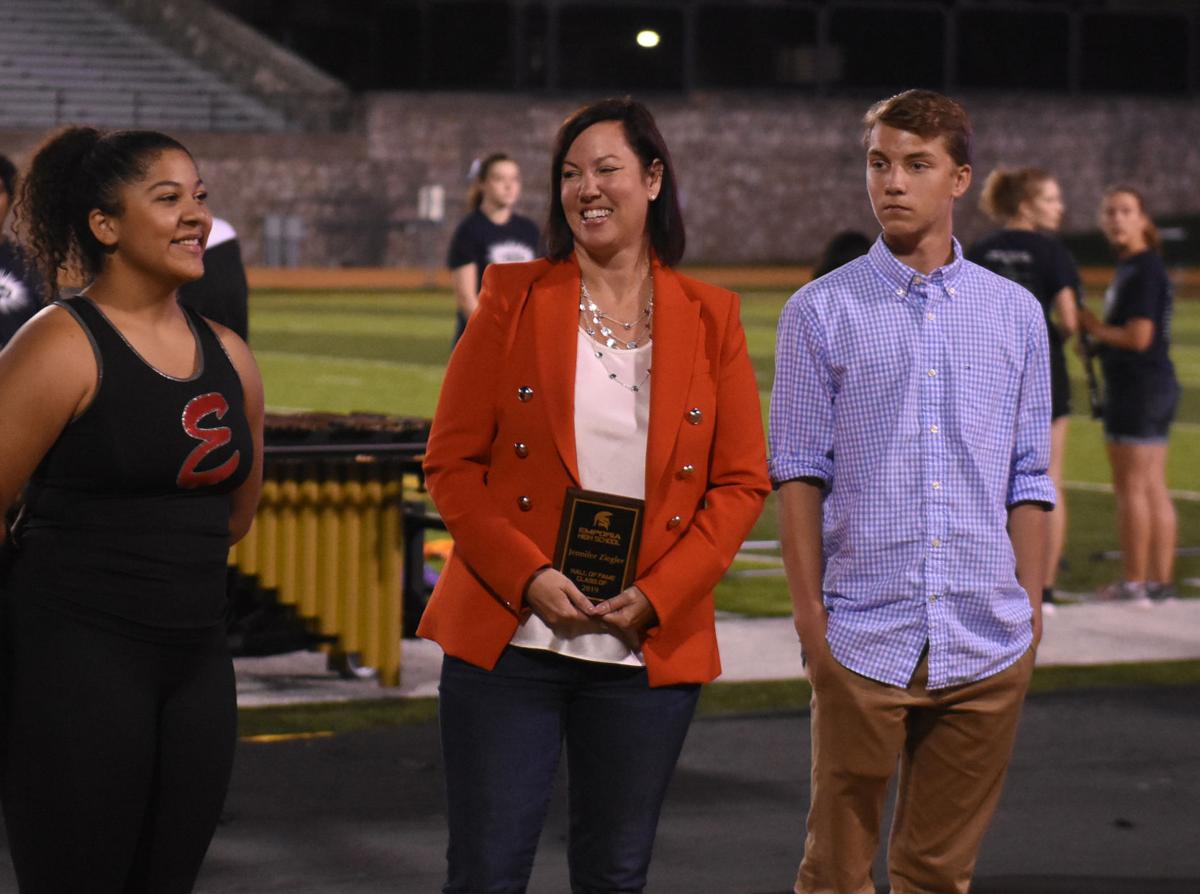 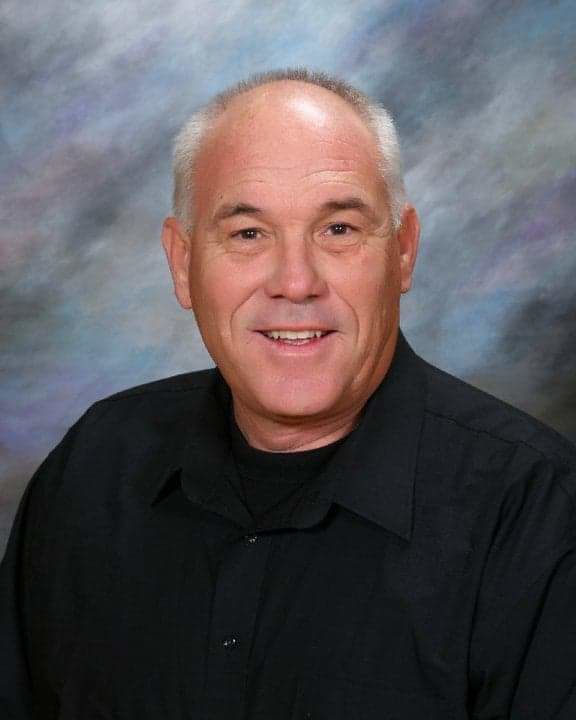 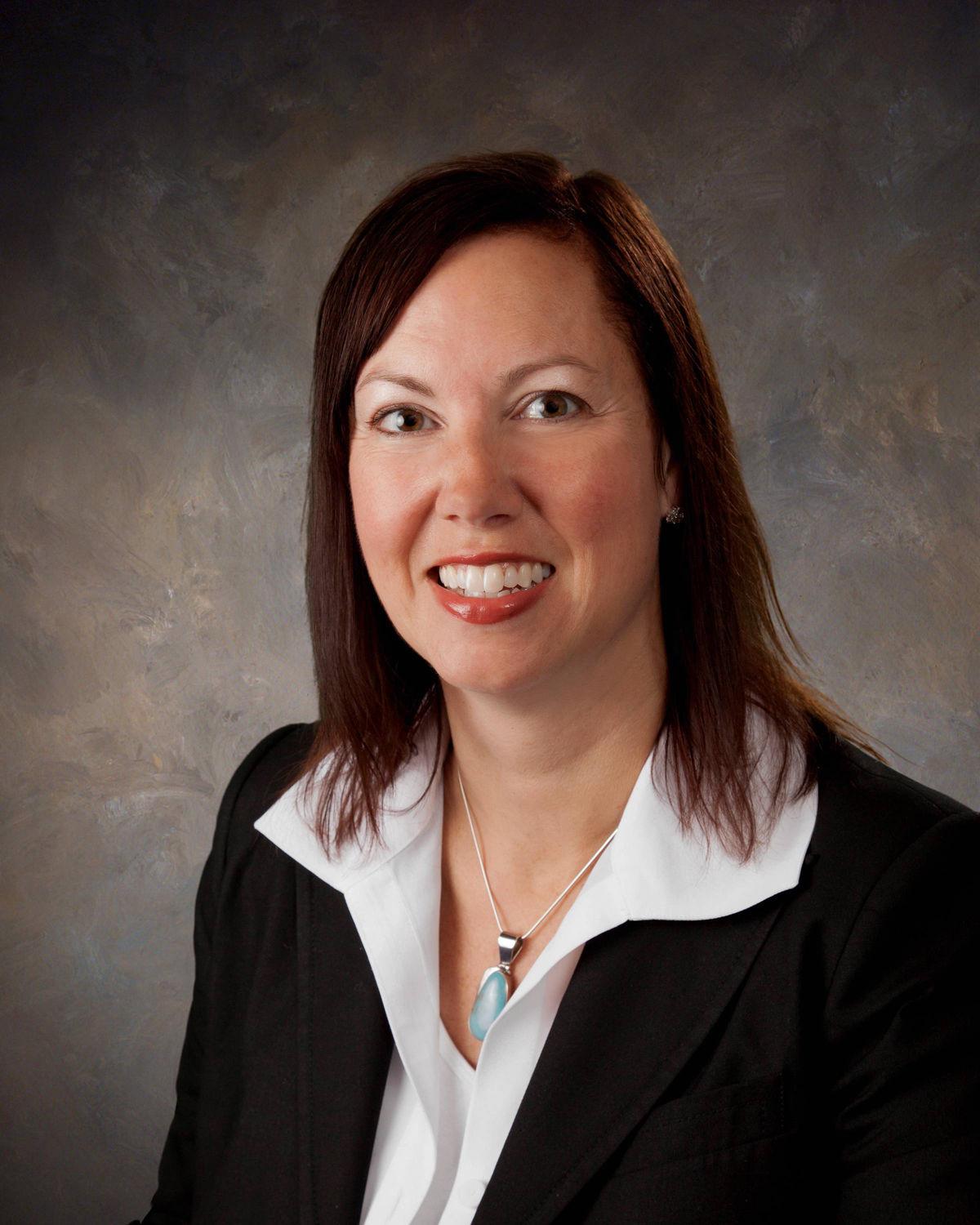 Editor’s Note: This story is being re-printed due to a printing error in Saturday’s Gazette.

The Emporia High School Hall of Fame welcomed two new members this week when Jesse Nelson and Jennifer Hanlon Ziegler were inducted as the Class of 2019.

Both were honored during halftime of the Spartans’ varsity football game against Topeka West Friday at Welch Stadium.

Nelson graduated from Emporia High School in 1970. He attended Emporia State University and graduated in 1974 with a degree in Special Education. After teaching in Kingman, Nelson returned to ESU to get a Master’s Degree and serve as an assistant coach for the Emporia State men’s basketball team. He returned again to ESU in 1984 for a second Master’s degree, this time in psychology and counseling.

Over the next four decades, he coached girls basketball at Olpe High School. He served as a K-12 Physical Education teacher, taught health, psychology was a driver’s ed teacher and a counselor, as well as coached many different sports. He also taught drivers ed at Emporia High School for 25 summers.

He continues to lead the Lady Eagles basketball team. In his time coaching, his teams have won more than 89 percent of their games at the high school level and 88 percent of their games at the junior high level. They have participated in 25 state tournaments, won 28 league championships and 28 league tournament championships. They have been state champions three times. His teams have amassed more than 900 wins and and Nelson is the Kansas all-time career leader in wins. He has been named state coach of the year three times in his career, he has served as both an assistant coach and head coach for Kansas All-Star games and in 2014 he was chosen by USA Today as “America’s Best High School Girls Basketball Coach, National Champion.” In 2016, he was chosen as the head coach of the west team for the McDonald’s All-American Games in Chicago, a game his team won in overtime.

“Jesse doesn’t like to talk about the number of wins, instead, he will talk about how hard his girls play, and how he wants them to improve each and every day so they can play their best basketball at the end of the season,” one nomination stated. “He places a strong emphasis on the competitive spirit and the importance of good sportsmanship.”

“Besides his success in coaching, Jesse is always willing to help out friends, family, and anyone in need,” read another nomination.

A third nomination letter reads, “If pressed to give a key for his success, Jesse credits great athletes, girls with good character, good assistant coaches, and strong parental support. He has been a powerful influence on thousands of youngsters.”

Nelson credits his success to a very tolerant and supportive wife and three kids and six siblings.

Ziegler began her career as a staff counsel for Senate Community Services in Washington state. In 2003, she became the executive director of the Washington State Transportation Commission. She also served as director of Government Relations and Communications for the same department. From 2006-2009 and 2011-2013, she served as the Executive Policy Advisor and Legislative Director for Washington Governor Christine Gregoire.

Since 2013, she has run her own public affairs consulting firm, working with clients including Toyota of North America, Kaiser Aluminum, the Washington Economic Development Association, the Washington Roundtable and the Statewide Boys and Girls Club Alliance.

“Jennifer brought a high level of discourse and compassion in her approach and always sought to find the best outcome to advance our transportation system,” wrote a past director of transportation in Washington.

“Jennifer played an essential role on my senior staff,” former Governor Gregoire wrote. “I appreciated her reasoned and thoughtful approach in coordinating the logistics of my final state of the state address. Although Jennifer has left public service, she continues to find ways to contribute to her community.”

According to a nomination letter from a Washington Senator, “Jennifer does well in the lobbying community. Her knowledge, personality, trustworthiness, conscientious work ethic and background in a variety of issues make her one of a kind. Jennifer is a very self-motivated and hard-working individual who excels with any given project at any level.”