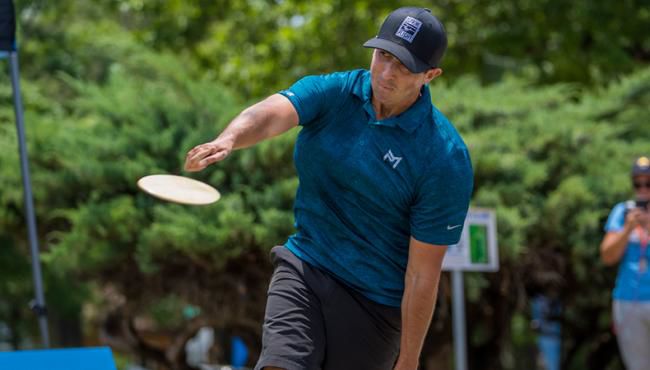 Paul McBeth jumped out to a day one lead at the Dynamic Discs Open. 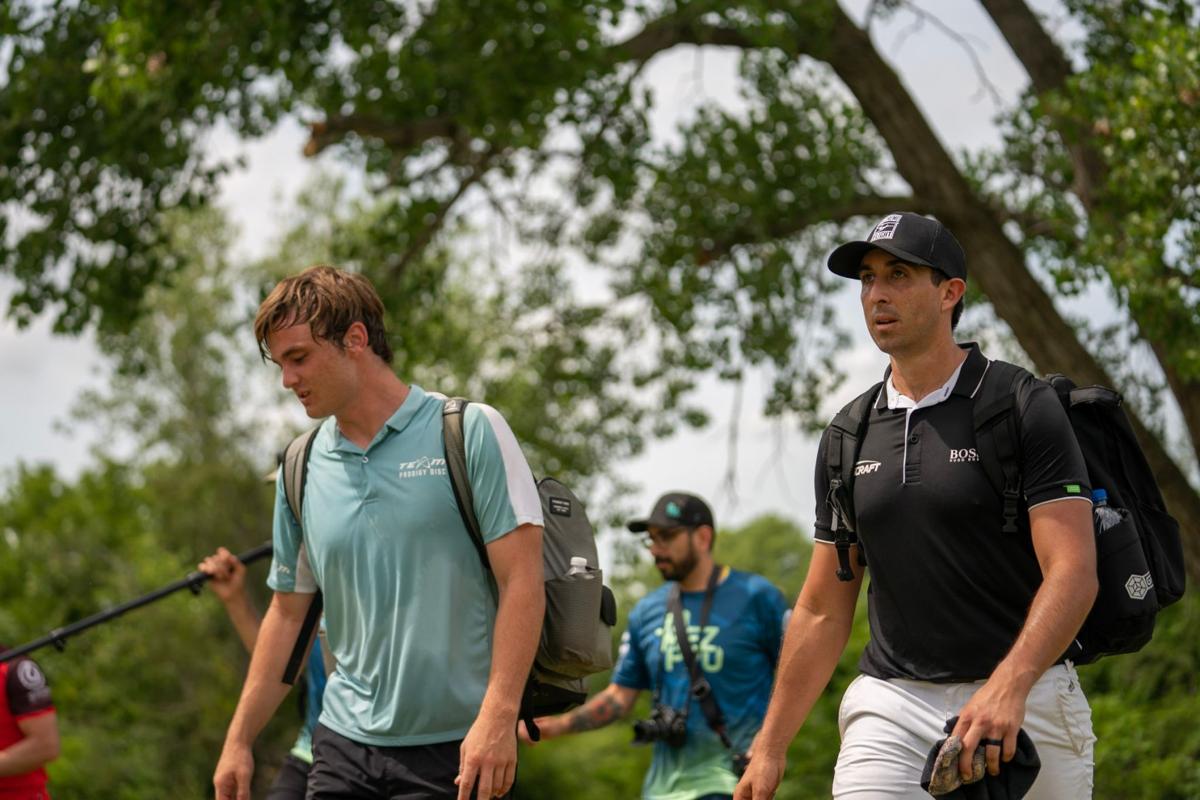 Paul McBeth (right) and Kevin Jones remained on the final round lead card heading into Sunday. 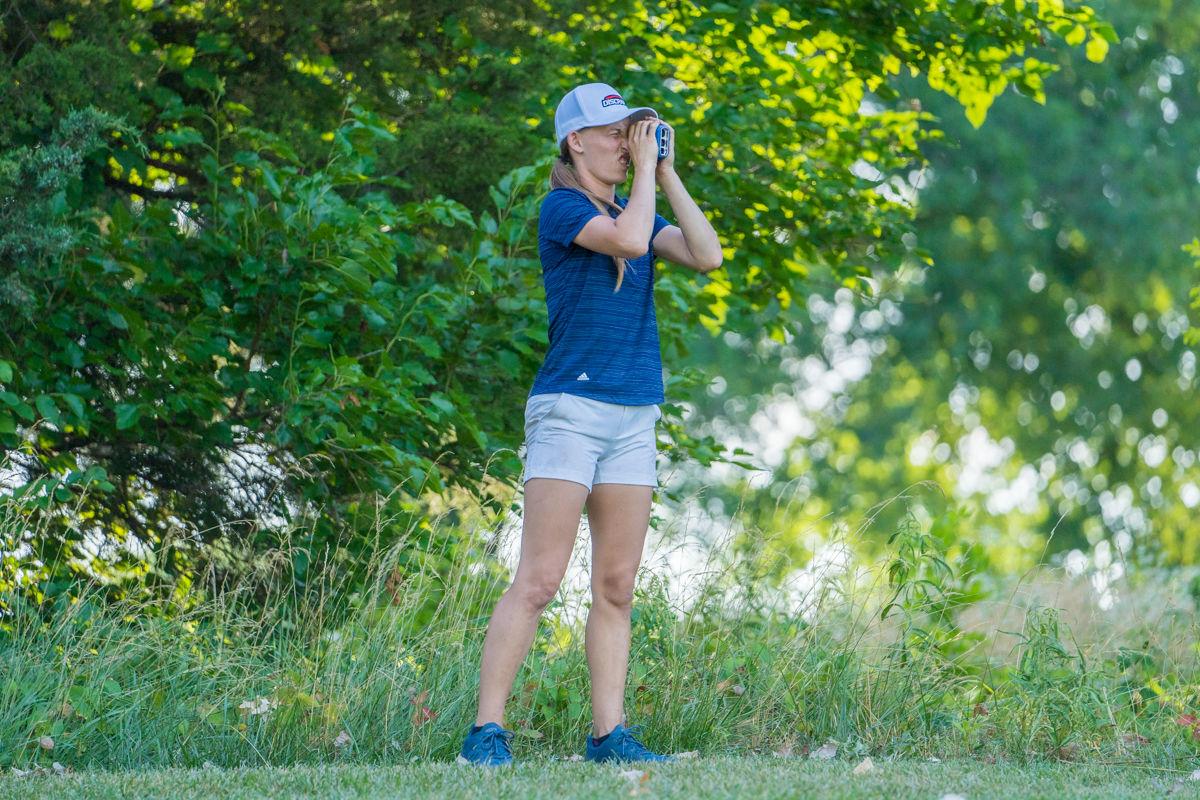 Paige Pierce had her eye on the lead at the Dynamic Discs Open Friday. 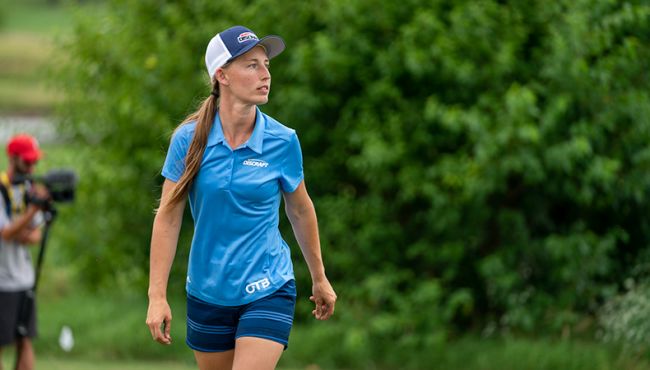 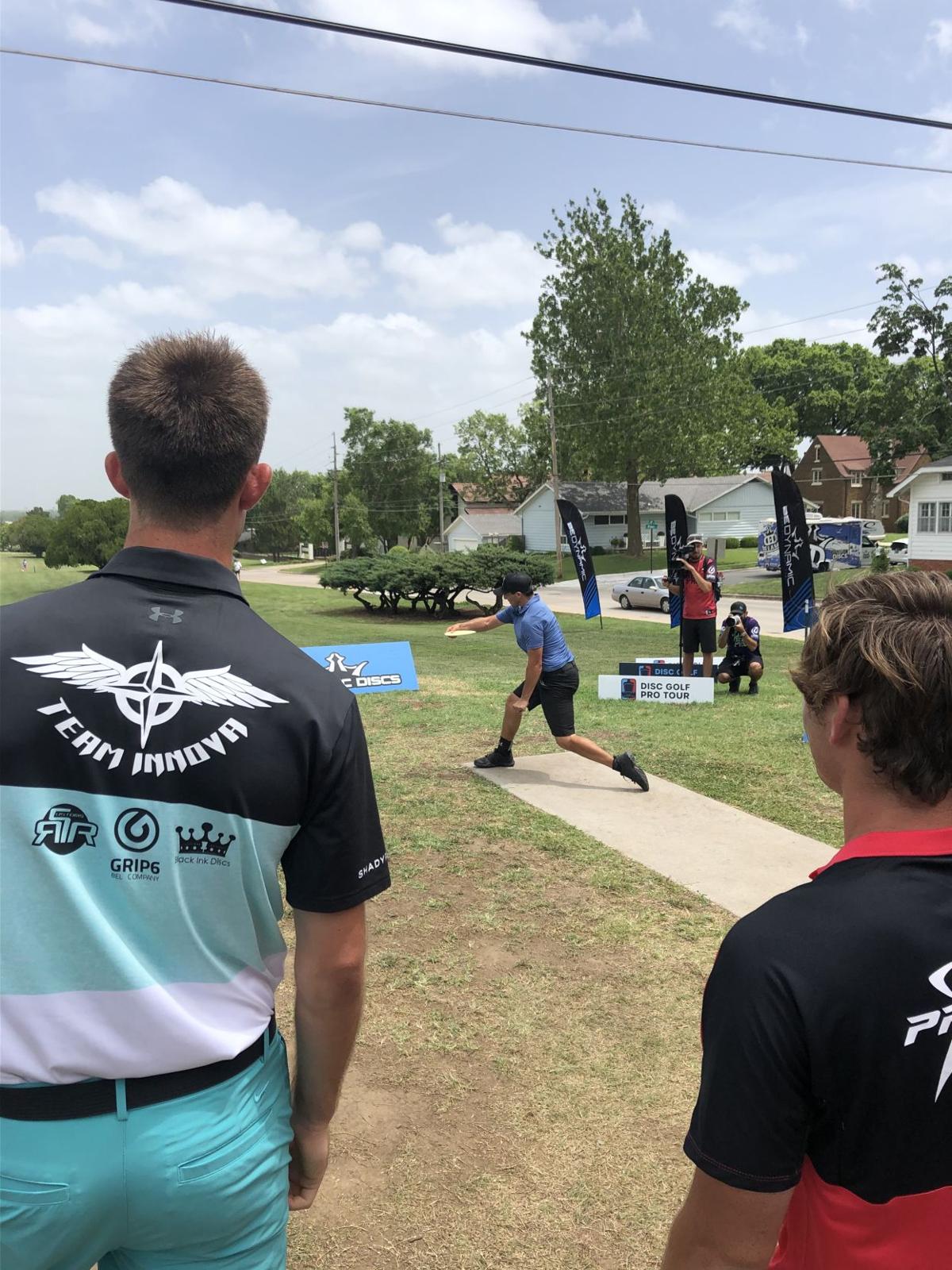 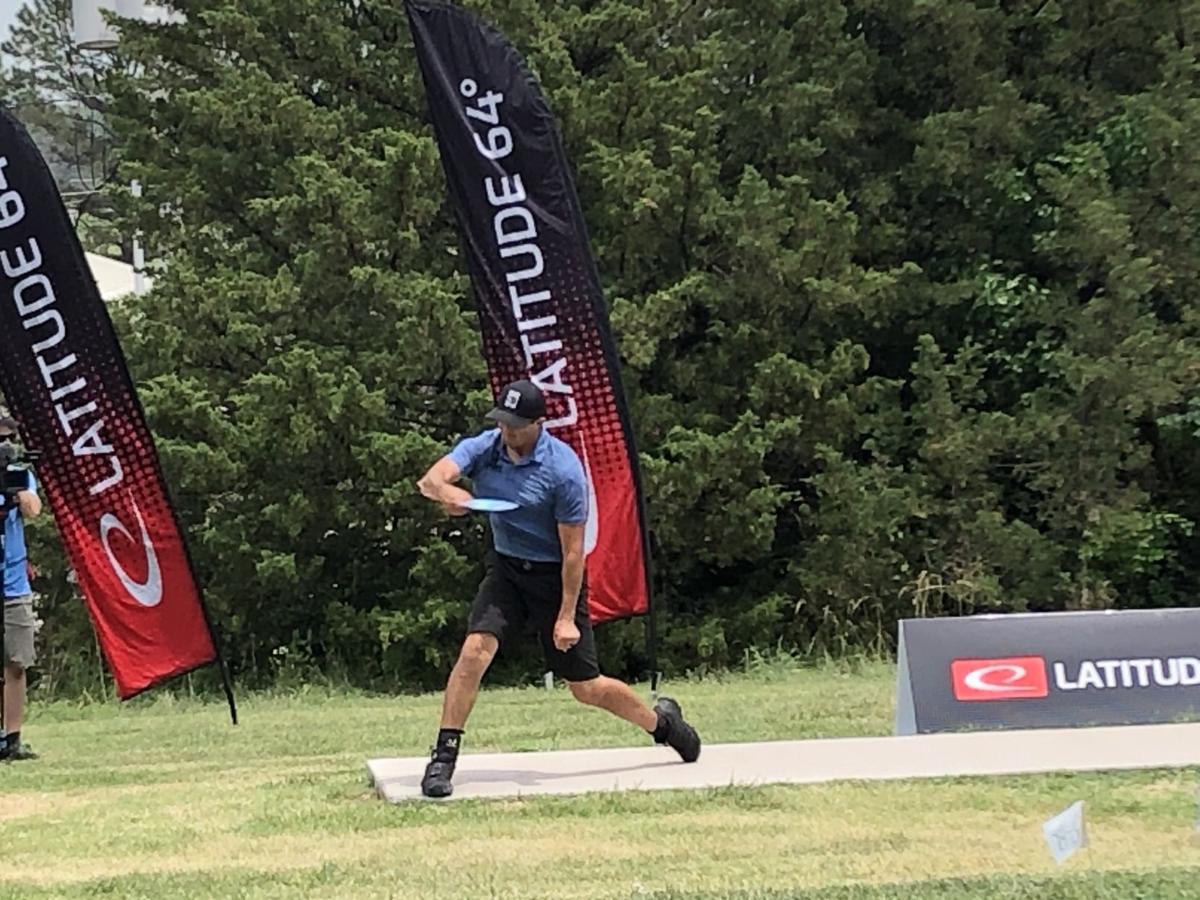 Paul McBeth jumped out to a day one lead at the Dynamic Discs Open.

Paul McBeth (right) and Kevin Jones remained on the final round lead card heading into Sunday.

Paige Pierce had her eye on the lead at the Dynamic Discs Open Friday.

The three-day tournament ran through Sunday and featured some of the biggest names in the sport.

“I think they’re all just happy to be back out here,” said Dynamic Discs Owner Jeremy Rusco, referring to the PDGA Tour hiatus which began in mid-March due to the COVID-19 pandemic. “A lot of them are shaking off some of that rust and competing at the high level they’re used to. We had about a hundred competitors on the men’s side and a little under 20 on the women’s side in total. With some of the travel restrictions, a few of the usual competitors were unable to make it, but we were definitely thrilled to see everybody that came out. They’re thrilled to be back in Emporia, too.”

In the men’s competition, Paul McBeth — a Huntington Beach, California native and 126-time PDGA event champion — edged out Floridian Calvin Heimburg by a single throw to claim top honors, finishing at 24-under par.

The women’s competition was dominated by Plano, Texas native Paige Pierce. A veteran of more than 270 PDGA events — 128 of which resulted in first-place finishes — Pierce finished 10 throws ahead of the next closest competitor, New Yorker Missy Gannon, at a blazing 14-under par.

Among the five Emporians to participate during the weekend, the top finisher on the men’s side was Isaiah Esquivel, who finished tied for 63rd in the pool of 101 at 20-over par. On the women’s side, Paige Shue finished tied for third in a field of 15 with a four-over par.

If Offseason 2.0 resulted in rust for players on the Disc Golf Pro Tour, Paul McBeth and Paige Pierce seemed to have the antidote.

After a three-month hiatus, the Dynamic Discs Open put the pro scene back into the spotlight Friday in Emporia, Kan., and disc golf’s top-rated competitors remained head and shoulder above the rest of the field. McBeth’s 11-under par 54 at the Emporia Country Club put him three shots clear of Emerson Keith and Ricky Wysocki, while Pierce was the only woman to shoot under par with a 7-down scorcher. That showing has her eight throws clear of Kona Panis (+1) with 36 more holes in the tournament.

McBeth, still sporting an ankle brace as he nurses an injury that has nagged him since early 2019, clocked in with a 1085 round rating and a bogey-free performance. The five-time PDGA World Champion was the only competitor on his card to safely land on hole 16’s island, and he cruised with an 88 percent circle 1x putting rate.

Pierce, meanwhile, rode high on the front nine, capping off the first half of the day with an eagle as she crouched under a bush and smashed a 35-foot connection. Though the back wasn’t as kind — she carded three out-of-bounds strokes en route to a double-bogey and two singles — she finished with an 80 percent circle 1x clip and a 1016-rated showing.

Wysocki admitted to some early nerves that led to a run of three straight bogeys from holes 2 through 4. He settled in with four consecutive birdies, though, and was clean for the final 13 frames. Keith twice cobbled together four-birdie streaks as the duo finished with 1067-rated rounds. Recently minted The Majestic Champion Kevin Jones rounds out Saturday’s lead card at 7-down, while Eagle McMahon and Noah Meintsma share fifth place at 6-under.

Panis scrambled her way to her strong finish, making par on 40 percent of her chances when she was out of place to lead the Open Women’s field. Her three birdies were the second-most in the 15-player pack but were erased by a few crooked numbers. Local hero Paige Shue sits in third place with a 2-over par total, and Rebecca Cox and Missy Gannon are tied for fourth at 3-over.

In other performances of note, Calvin Heimburg closed the day with five consecutive birdies to land in a tie for seventh place alongside Andrew Presnell at 5-under, and 2019 Disc Golf Pro Tour Champion Chris Dickerson sits in a three-way tie for ninth at 3-under. Former Ultimate star Brodie Smith stood out in only his second career pro event, tossing a 1018-rated even-par showing to start in a tie for 23rd.

2018 PDGA Junior World Champion Cynthia Ricciotti kicked off her tournament with a 4-over par showing to land in sixth place on the leaderboard. Defending Dynamic Discs Glass Blown Open Champion Catrina Allen’s putting woes continued, as she finished with a 25 percent circle 1x performance that contributed to her 5-over par opener.

You know how the adage goes: “It’s better to be lucky than good.”

Well, on a day when Paul McBeth continued to be very, very good, he also closed out his second round of the Dynamic Discs Open as the beneficiary of some fortune.

The five-time PDGA World Champion outdid his opening round performance with a 12-under par 53 Saturday at the Emporia Country Club, bringing his two-day total at the Disc Golf Pro Tour’s season restart to a 23-under par 107. That showing helped him extend his lead to a handful of shots, as Emerson Keith (-18) and Kevin Jones (-17) fired off 10-under par 55s as they aimed to keep pace. Ricky Wysocki’s 9-under par performance has him tied with Jones, keeping moving day’s lead card intact for Sunday’s final.

Paige Pierce continued her dominance in the Open Women’s division, carding a 6-under par 61 that puts her 36-hole total at a 13-under par 121. She’s a dozen throws clear of the field’s other Paige — Shue — after the Emporia local’s 3-under par finish brought her total to a 1-under par 133. Missy Gannon also tossed a 3-under to move up one spot and into third place at even-par, and Catrina Allen jumped back onto the final round lead card with a 2-under par performance.

As if McBeth’s scores don’t tell enough of the story, there’s also this: He’s the only player in the 101-competitor Open field who has gone both bogey-free and O.B.-free through 36 holes.

Still, the Southern California native was his own worst critic after the round, as he lamented closing the day with three straight pars.

“Finish was kinda stale — three pars in a row, wasn’t really a fan of it,” McBeth said. “It was kinda frustrating. I wanted to keep pushing because it might come down to those three holes tomorrow.

“I think the frustration will help going into tomorrow,” he concluded.

Though McBeth still clocked in with a 1084-rated showing, he said he wasn’t feeling confident on the putting green. His circle 1x showing of 78 percent featured two-putts on both 1 and 18 and dropped his tournament total to 82 percent to put him 21st in the field.

“All day, honestly, I didn’t feel good with my putt at all,” he said. “...I just willed them all in there...If i was putting like yesterday it probably would have been a 16 (under) today.”

That miss on 18 came after his second shot was straying OB but struck a spotter and caromed back in bounds. “Was given a gift there,” McBeth said.

On the other hand, putting kept Keith and Jones in the race, with the former notching a perfect sheet on the green and Jones coming in with an 85 percent success rate.

Still, Jones knew he was going to need something Herculean to chase down McBeth on Sunday.

“Today I birdied six holes in a row and I didn’t gain a stroke on him,” Jones said. “So it’s awesome — honestly, it’s really cool the level that we’re playing at. I just need to birdie nine in a row.”

Pierce opened her day with a turkey, aided by a 100-foot jump putt on the 576-foot 2nd. Though the OB bug bit four times from holes 8 through 18, she was able to stave off damage and keep the rest of the field from gaining strokes. Instead, it’s looking like Sunday will be a mere formality as she aims for her second Disc Golf Pro Tour victory of the year.

Shue birdied two of the last three holes to claw a couple strokes back from Pierce. Her ability to keep it between the lines has been an asset, as she sports the best OB rate (.083) in the division.

“I wouldn’t say I played more aggressive, but I was executing a few more shots than I did yesterday,” Shue said. “...I’m pretty stoked with how the round finished up.”

Calvin Heimburg recovered from a double-bogey-bogey opening stretch to finish with an 8-under par round to move into fifth place. Both Drew Gibson and Grady Shue made big moves to crack the top 10, while Brodie Smith — just one day after notching a career-best 1018-rated showing — withdrew after feeling the effects of Lyme disease.

Rebecca Cox rounds out the FPO top five after some putting woes dropped her one slot on the leaderboard. Kona Panis, who started the day strong on the lead card with a 50-footer for birdie, logged a disastrous 10 on hole 9 and fell into a tie for sixth place with Cynthia Ricciotti.