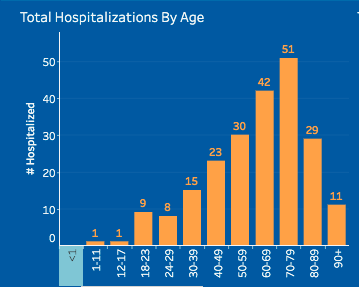 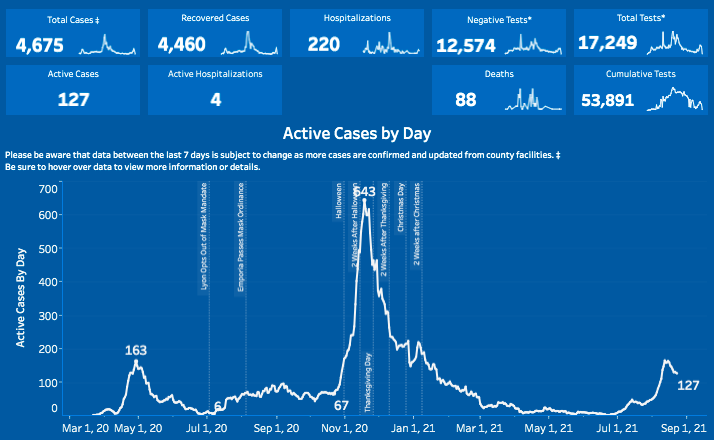 After press time, USD 253 said it was reviewing information.

“We have 49 active cases in people 23 and younger,” said Flint Hills Community Health Center marketing manager Justin Ogleby. “I think it is safe to assume we will continue to see increases in this demographic, because they are less likely to be vaccinated and are in situations where they are not social distanced for a large portion of the day.”

The district told The Gazette after press time that it was reviewing information.

According to the Associated Press, more than 200 million Pfizer doses have been administered in the U.S. under special emergency provisions — and hundreds of millions more worldwide — since December. In going a step further and granting full approval, the Food and Drug Administration cited months of real-world evidence that serious side effects are extremely rare.

President Joe Biden said that for those who hesitated to get the vaccine until it received what he dubbed the “gold standard” of FDA approval, “the moment you’ve been waiting for is here.”

“Please get vaccinated today,” he said.

Pfizer said the U.S. is the first country to grant full approval of its vaccine, in a process that required a 360,000-page application and rigorous inspections. Never before has the FDA has so much evidence to judge a shot’s safety.

The formula, jointly developed with Germany’s BioNTech, will be marketed under the brand name Comirnaty.

Moderna has also applied to the FDA for full approval of its vaccine. Johnson & Johnson, maker of the third option in the U.S., said it hopes to do so later this year.

Just over half of the U.S. population is fully vaccinated. Vaccinations in this country bottomed out in July at an average of about a half-million shots per day, down from a peak of 3.4 million a day in mid-April. As the delta variant fills hospital beds, shots are on the rise again, with a million a day given Thursday, Friday and Saturday.

“Our vaccination rates have be slowly increasing for the last month, and we believe that is because of a fear of the delta variant, which is much more contagious than the original version of COVID, and people getting vaccinated because of mandates either at work or school,” Ogleby said. “I expect because of the FDA’s announcement we will see even more employers implementing vaccine mandates.”

Full approval of Pfizer’s COVID-19 vaccine means it meets the same “very high standards required of all the approved vaccines we rely on every day,” said Dr. Jesse Goodman of Georgetown University, a former FDA vaccine chief. That should help “anyone who still has concerns gain confidence” in the shots.

Overall, 4,675 cases have been reported in Lyon County since March 2020, including 4,460 recoveries and 88 deaths. A total of 82 breakthrough cases have been recorded since June 15 with 23 patients receiving the Janssen vaccine, 41 receiving Moderna and 18 receiving Pfizer.

Updated to correct data regarding hospitalizations in Lyon County children.

One-third of all drugs approved by the FDA are recalled. Betcha I know what's going to happen to these jabs.

Ordered some covid test kits from a big box store. I'm going to swab some produce and pets to see how many false positives I get. I heard the former Tanzanian president did the same thing with a goat and a mango. Both of those tests came back positive for covid. A goat and a mango. I'm going to see if a tomato, a jalapeño pepper, a pawpaw, and a neighbor's cat come back positive. I can't wait. My own science fair project.

it's good to have a hobby, Watch. Let us know what you find out. We'll trust you. "I hear" a lot of things too. This sounds like most of "your own science". Though the cat may object. Good Luck

Order some magnets too. When you get your vaccine I heard a magnet will stick to it! Also order yourself some Ivermectin... I hear it works great on sheep.

Does a magnet stick to your arm?

The hospitalizations for under 18 have remained the same. The graphic that the Gazette used, was exactly the same a month ago for <18. Maybe try actual reporting, and not fear mongering.

But yeah, go ahead and keep believing the new covid vaccine is the first mRNA vaccine...lol.

“Never before has the FDA has so much evidence to judge a shot’s safety.”

Really? Ok, then please tell me the long-term effects of the shot, and I’ll go get it today.

200 million vaccine doses given is quite the experiment, and the data from hospitals and morgues provide a whole lot of evidence.

mRNA vaccines have been around for years with no long term effects. History tells us that side effects are extremely rare, and if they do occur, they usually happen within the first two to eight weeks. With 200 million doses given, all side effects showed up within two weeks. Your chances of getting myocarditis is about one in a million, and all of those are mild cases with full recoveries, no deaths. Thousands of people are still dying from not having a vaccine on a daily basis.

Hope you will keep your word and go get vaccinated today. But for some reason I bet your fear still trumps common sense.

Man, I try to let your stupid speak for itself, but your misinformation is just too much. Please tell me what other vaccine is an mRNA vaccine. Oh you can’t, because this is the first. And do you know why this is the first? Honestly, I’ll get it right now if you can tell me that.

You should have just googled it yourself... It sounds like you believe mRNA was invented as a covid-19 vaccine... which would explain why you think I've posted something misleading.

"Researchers have been studying and working with mRNA vaccines for DECADES. mRNA vaccines have been studied for INFLUENZA, ZIKA, and RABIES. Beyond vaccines, cancer research has used mRNA to trigger the immune system to target specific cancer cells" The Covid-19 vaccine is the first mRNA vaccine to get FDA approval, but certainly not the first ever made.

The vaccine wasn't built completely from scratch, the mRNA vaccine foundation already existed which is how the vaccine was able to be created as quickly as it was. I'm no vaccine expert, you'll have to actually read up on it yourself if you want a better understanding. Keep your word and go get your shot right now.

A friend, a relative contracted polio at two months of age. She spent her entire life in a wheelchair. She contracted polio two years before the polio vaccine was developed. At that funeral that day, some sixty years later, I contemplated what a difference two years might have made in her life. Sometimes a little faith and hope get you further than a guarantee.

Side effects show up in the first two months, Fear. Here's an article that presents factual information in a non-technical way. https://www.muhealth.org/our-stories/how-do-we-know-covid-19-vaccine-wont-have-long-term-side-effects

And Aim, it’s clear you can’t read or understand what you read, so I’m not wasting my time on your stupidity anymore

Its obvious you didn't look at the link posted... lol. What kind of "long term" effect are you so afraid of that doesn't show up for more than 6 months? Common sense says the side effects are already known, but you're still living in fear. And I really don't understand a lot of mRNA stuff, that's why I just copy/paste it from the experts to here.

You said "Please tell me what other vaccine is an mRNA vaccine. Oh you can’t, because this is the first." I listed THREE, lol. Read this next sentence slowly... "Researchers have been studying and working with mRNA vaccines for DECADES"

It's clear you don't understand that mRNA research has been around for DECADES and the covid 19 vaccine was not the first. Thank you for not continuing to waste my time arguing when you're obviously wrong.

Great--six months is the magic timeframe. Well, let's see...the Pfizer vaccine has been authorized since December 11. Moderna since December 18. Johnson & Johnson since February 27. We're at six months for J&J. It has been longer than that for the other two. It has been longer than a year since human trials began. Reported side effects appear within the first two months. We have enough data to understand there are no long-term side effects.

Daily meds are more likely to have long-term side effects because they are taken for, well, a long time. Vaccinations are a one-time event. Hence when side effects occur, they show up quickly.