NLC students learn in a modified environment during COVID-19. 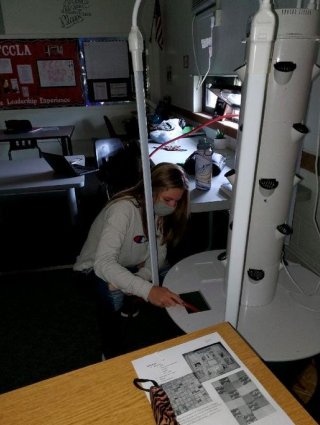 NLC students learn in a modified environment during COVID-19.

The USD 251 North Lyon County Board of Education discussed the district’s response to COVID-19, Wednesday evening, after reporting its first four cases of COVID-19 between Oct. 5 — 14.

A student at NLC then tested positive on Oct. 7, but no close contacts within NLC or quarantines at school resulted from this because the student had not been at school during the infectious period.

On Wednesday, the district was informed of another NHHS staff member who had tested positive. No close contacts within the high school or NLC were identified because the staff member was not present at the school during the infectious period.

Superintendent Robert Blair said the district started a COVID-19 dashboard to provide weekly updates in an effort to be transparent, now that the district had experienced its first cases. The dashboard, which can be found at www.usd251.org/o/district/page/covid-19--210, includes case information and an data dashboard.

“It’s all out there for the public to see; we’re not hiding anything,” he said. “Most schools have a dashboard now. I didn’t initially do it in August and September because we didn’t have any cases. ... I think it’s good to be transparent with that stuff.”

Blair said he felt the district’s students and staff were doing a good job at school to follow the rules on mask-wearing and social distancing.

Board President Matt Horton said he had reached out to everyone he knows, including staff, who has been diagnosed and was encouraged to hear that everyone is on the mend although everyone has been “really sick.”

“One thing we know is it doesn’t affect kids nearly as bad,” he said. “One family of a staff member, their son also had it too, and he didn’t hardly notice he was sick. He bounced right back. The adults, it’s been pretty tough on.”

Horton thanked the employees for coming to work and battling through, especially amid staff shortages in transportation, food service and more.

“I think a lot of people aren’t doing things because they’re scared of the possibility of getting COVID,” he said.

The board also approved the purchase of air purifying devices, called iWaves, from Modern Air. The devices are installed in air conditioning and heating systems and reduce pathogens, allergens, particles, smoke and odors in the air.

Blair said the devices decompose the proteins on the surface of pathogens such as viruses, bacteria or mold, and inhibit their growth.

“I think this would really benefit the air quality of both buildings, to put these units in our duct work of both blowers,” Blair said. “We could go a secondary route and get portable ones for those classrooms that don’t have central heating and cooling.”

Horton asked about maintenance on the units. Blair said the units are maintenance-free and have three-year warranties.

The purchase will be paid for with SPARK funds.

The board also approved a proposal to deposit $900,000 at Citizens State Bank and Trust Company, Reading branch.

The board then voted on changing the date of its November meeting from Nov. 11 — which is Veterans Day — to Nov. 10. The motion passed.

The board will next meet at 7 p.m. Nov. 10 in the board office in Americus, with the meeting streaming online on Facebook.

As always you always make assumptions. You have no idea why they were sitting on those large balls we could’ve been a game or any number of things. You should just keep your opinion to yourself unless you know facts.

How can anyone learn anything while sitting on those stupid chairs? Whoever decided our children should sit on such things all day should be forced to use one his or herself. Plus the girl in the yellow shirt needs a lesson in mask use.

Maybe the girl in the yellow shirt is suffering from covid fatigue ,or maybe she's an early boomer into the conservative way of thinking. Anyway the school district does a lot of thing stupider than this.

I’m pretty sure if a child request a chair instead of a ball they can sit in a chair!! A lot of kid like the ball because they can move around more and not be stuck sitting in one spot entire day since they don’t rotate through different classes because if Covid. Chill out about a child wearing a mask not to your standards Karen!!!! These are kids stuck in one classroom all day with a mask on all day... Be lenient