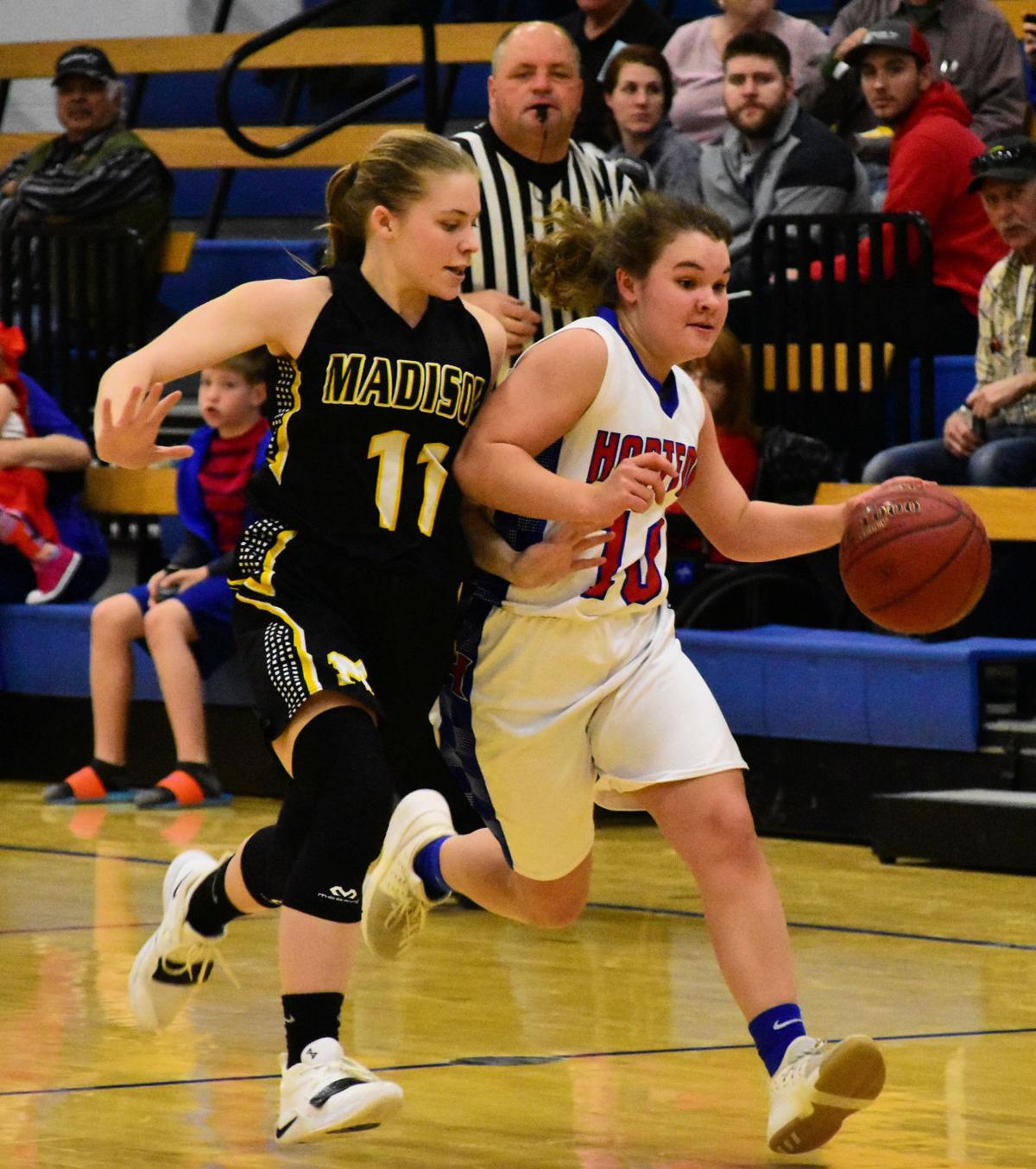 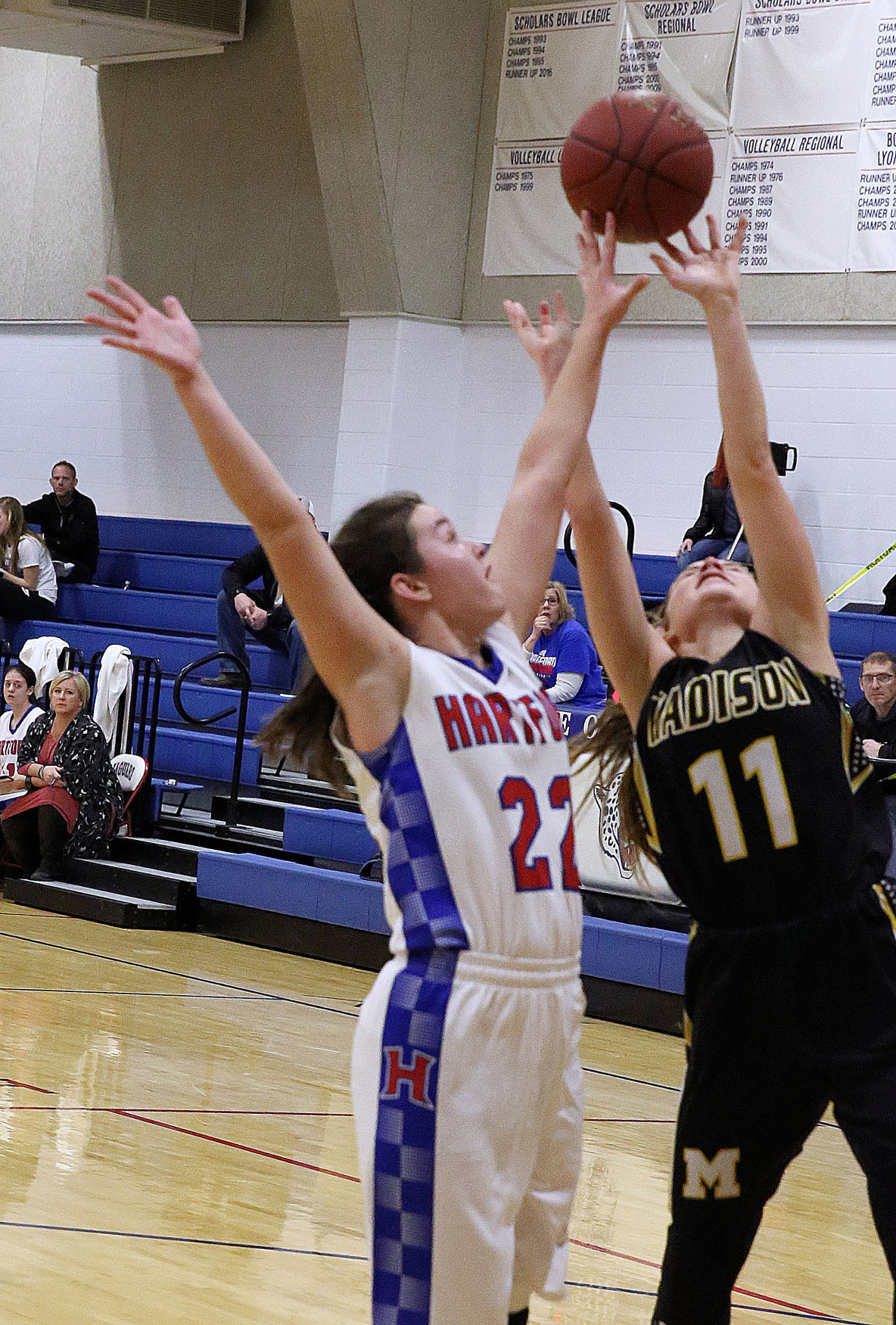 Hartford's Brooke Finnerty (22) reaches out to block a shot by Madison's Taylor Williams (11) on Monday night.

Hartford's Brooke Finnerty (22) reaches out to block a shot by Madison's Taylor Williams (11) on Monday night.

The Hartford girls had one thing on their mind when they saw Madison emerge as their first-round regional matchup on Monday night.

It was the Bulldogs who knocked the Jaguars down a peg in the Lyon County League Tournament a month ago, winning the third place contest.

Hartford fought to shut down the Madison shooters and turned in an outstanding offensive effort itself with a 54-27 victory.

“We’ve been working on this game for a week,” senior Bailey Darbyshire said. “We really wanted this. We didn’t want this to be our seniors’ last game, especially on (our) court. We kept saying ‘Hey, remember what happened last time, that can’t happen again. We changed our defense, we made adjustments and ... it worked great.”

That alteration on defense helped cause the Bulldogs problems in finding their shot most of the night.

Madison did not make a field goal from inside the arc in the first half, while Hartford was able to get plenty of looks at the hoop, scoring 28 points with just one trey.

The Bulldogs were 5-for-11 from long range, but didn’t make their first two-point shot until the third quarter.

“They took our perimeter away,” Madison head coach Vanessa Kresin said. “Our (lack of) inside (presence) was extremely exposed, but that’s our downfall is the post play. When you don’t have a threat in the post, (opponents) can sit out in a 3-2 zone and put pressure (on the shooters).”

Once Hartford got comfortable with its defense, the offense sparked to another level.

“We knew we had the length to make them think about some things,” Hartford head coach Ryan Thomas said. “We don’t have to press with our length, so we can stay off and still take angles, adjust and recover. We gapped things pretty well for the most part.”

Madison still was within striking distance at halftime, trailing by 13, but the Jaguars stretched things even further in the third as the Bulldogs’ offense continued to sputter.

“It allowed us to get out and run a little bit, Bailey did a good job of pushing the basketball, got some easy buckets and from there it ... snowballed and it got everyone’s confidence (up) obviously when you’re playing like that. Kiernan (Breshears), Bailey and Brooke (Finnerty) all played really well tonight (and) we had some other girls that maybe (didn’t) score, but played well defensively.”

Thomas lauded each of his players, including Breshears, who he said has displayed far more than a scoring prowess.

“She’s continued and continued to climb the ladder,” Thomas said. “Maybe she doesn’t have the numbers (consistency) like she had tonight, but you can see in the way she’s played ... with energy, attitude. She did a good job of taking just her competitiveness and anger of losing a game (last week) and funneling it into something positive to try to get a motor going for the team. Her effort is putting her in a leader role as a freshman and I’m fine with that.”

Monday, she scored 16 points, second only to Darbyshire, who had 21.

Madison was led by senior Emily Farrow, with 13.

The Bulldogs finished their season with a 7-13 record.

“I could not be more proud of the heart and the hustle that our small team portrayed,” Kresin said. “Huge credit to Emily Farrow as our sole senior, our sole captain. She made this season so enjoyable with her work ethic and pushing the younger players to get better, to be better. (In the) postseason we may not have been successful, but getting fourth in (the) regular season and getting third in tournament play in the Lyon County League, that is a huge success for this team and community.”

Hartford will now ready itself for the regional semi-final round, with the winner of Tuesday’s matchup between Marmaton Valley and Waverly.