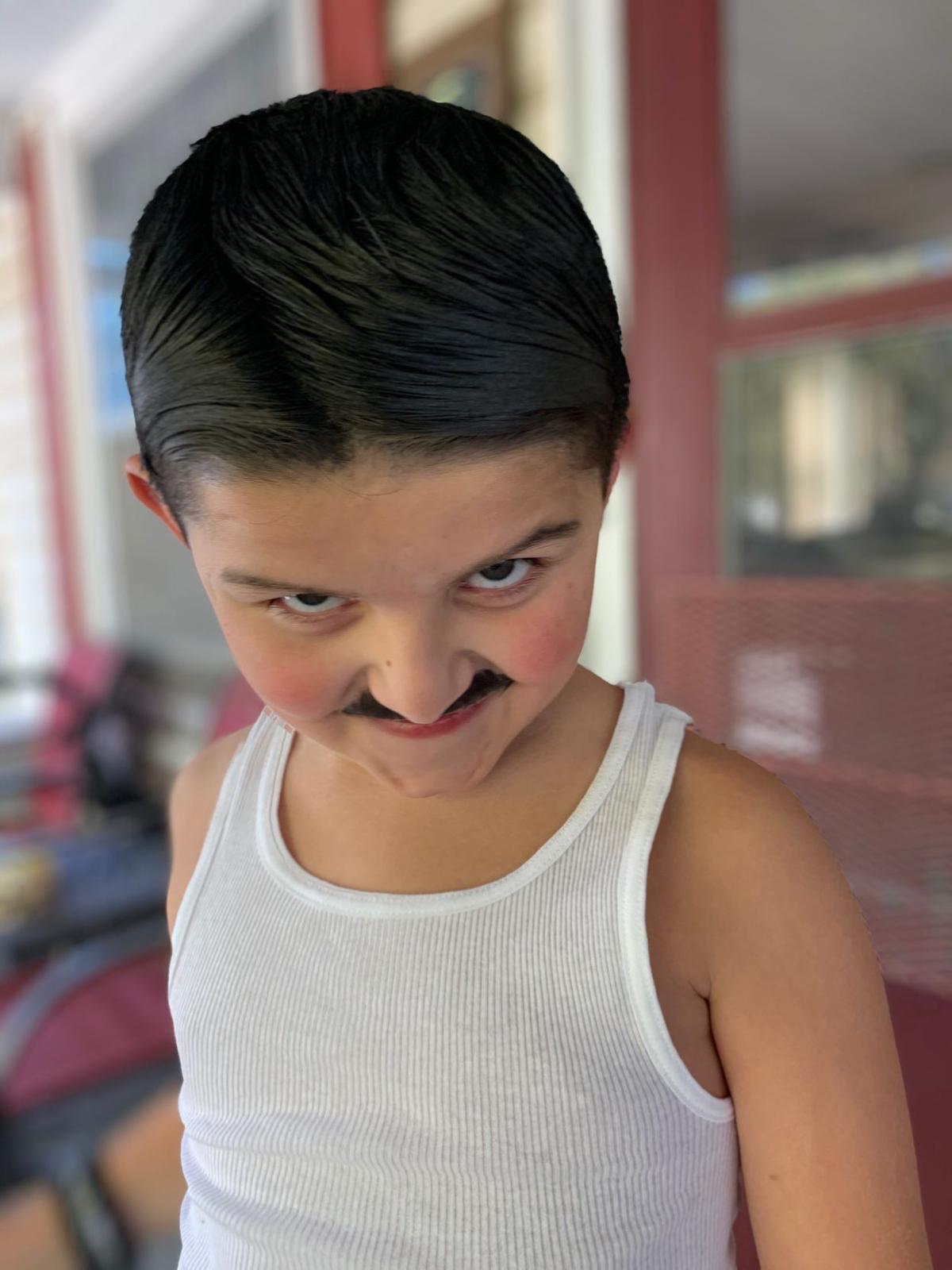 Adrian Cain, 8, is a mini-Freddie Mercury 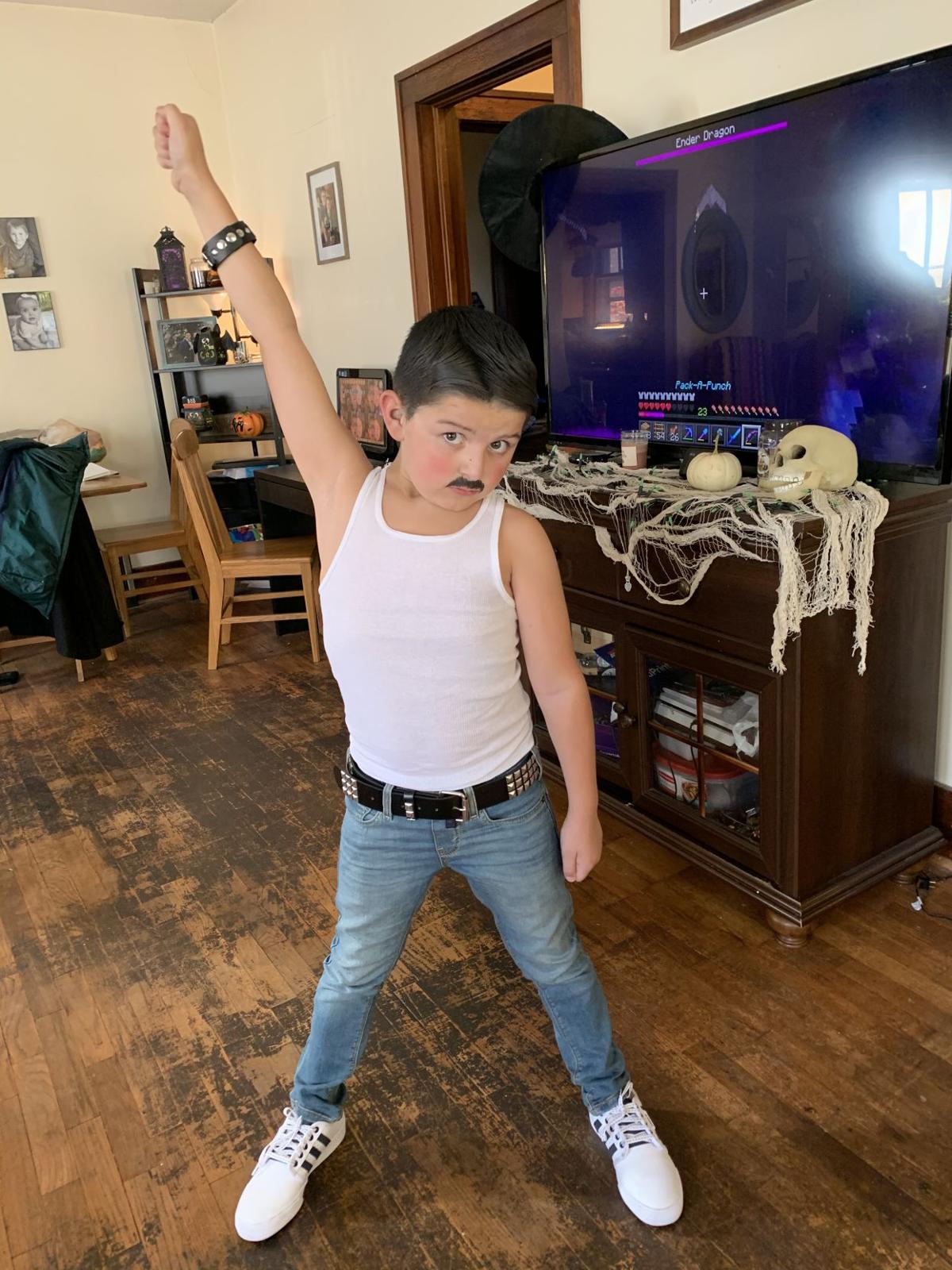 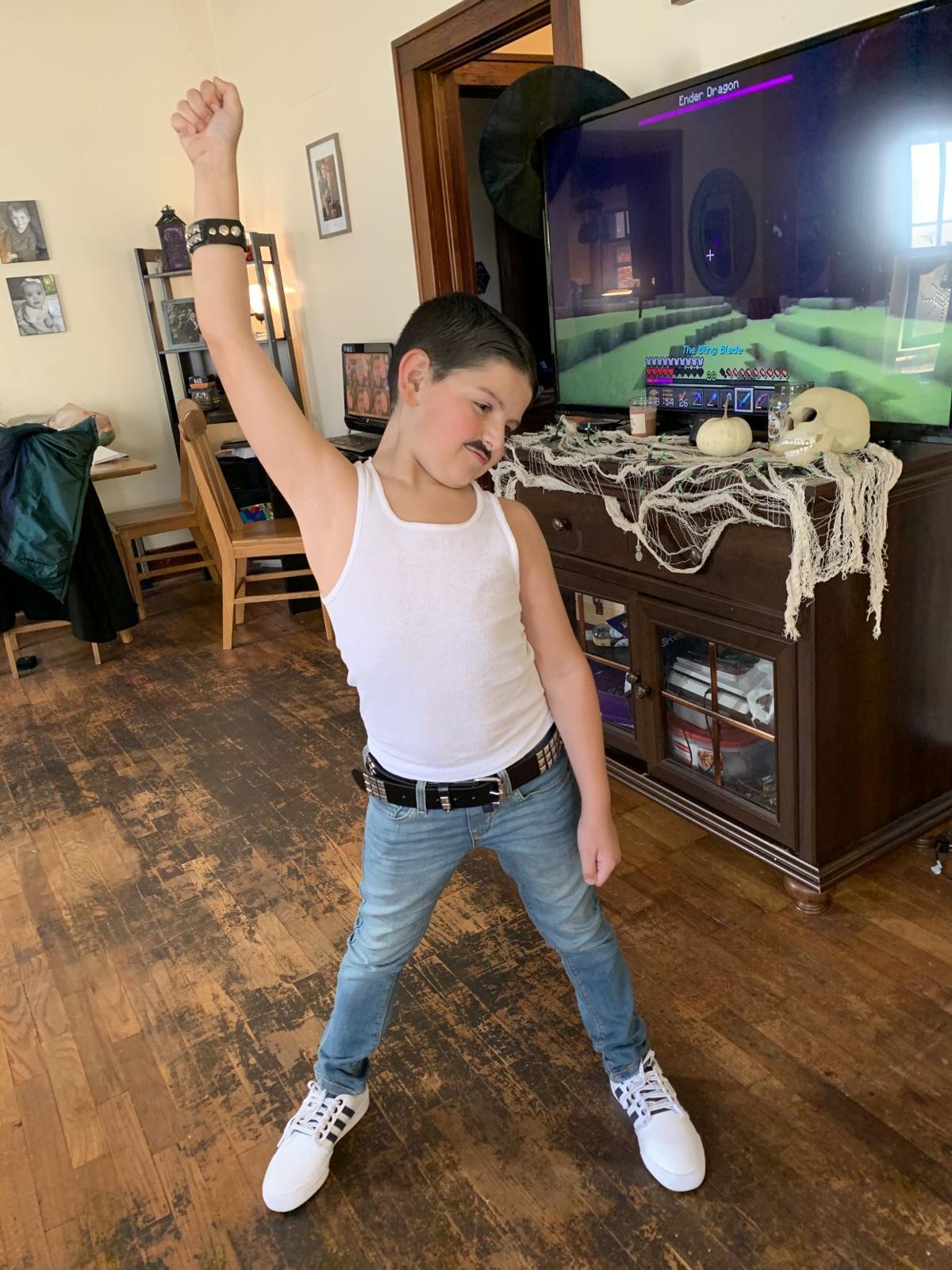 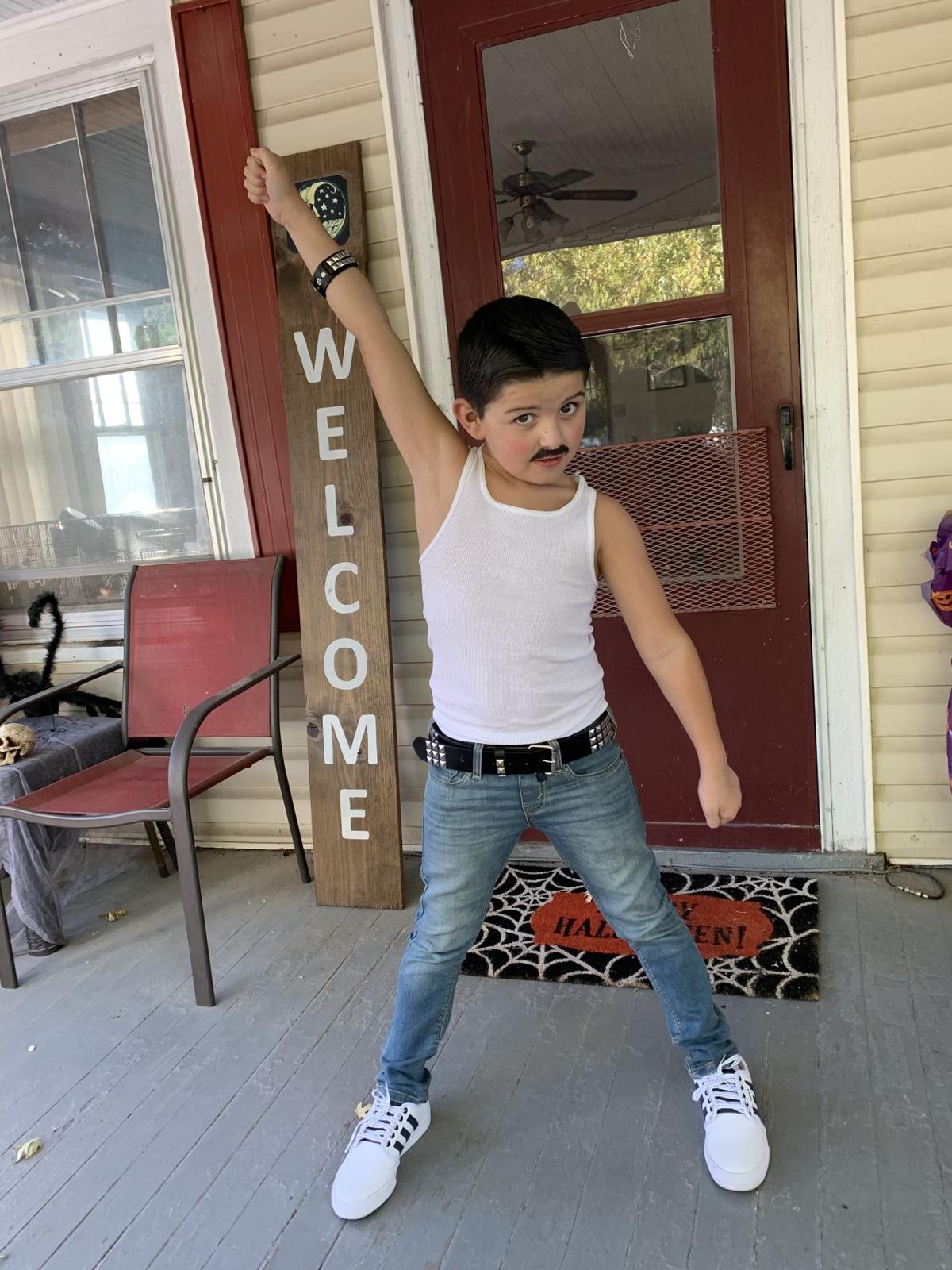 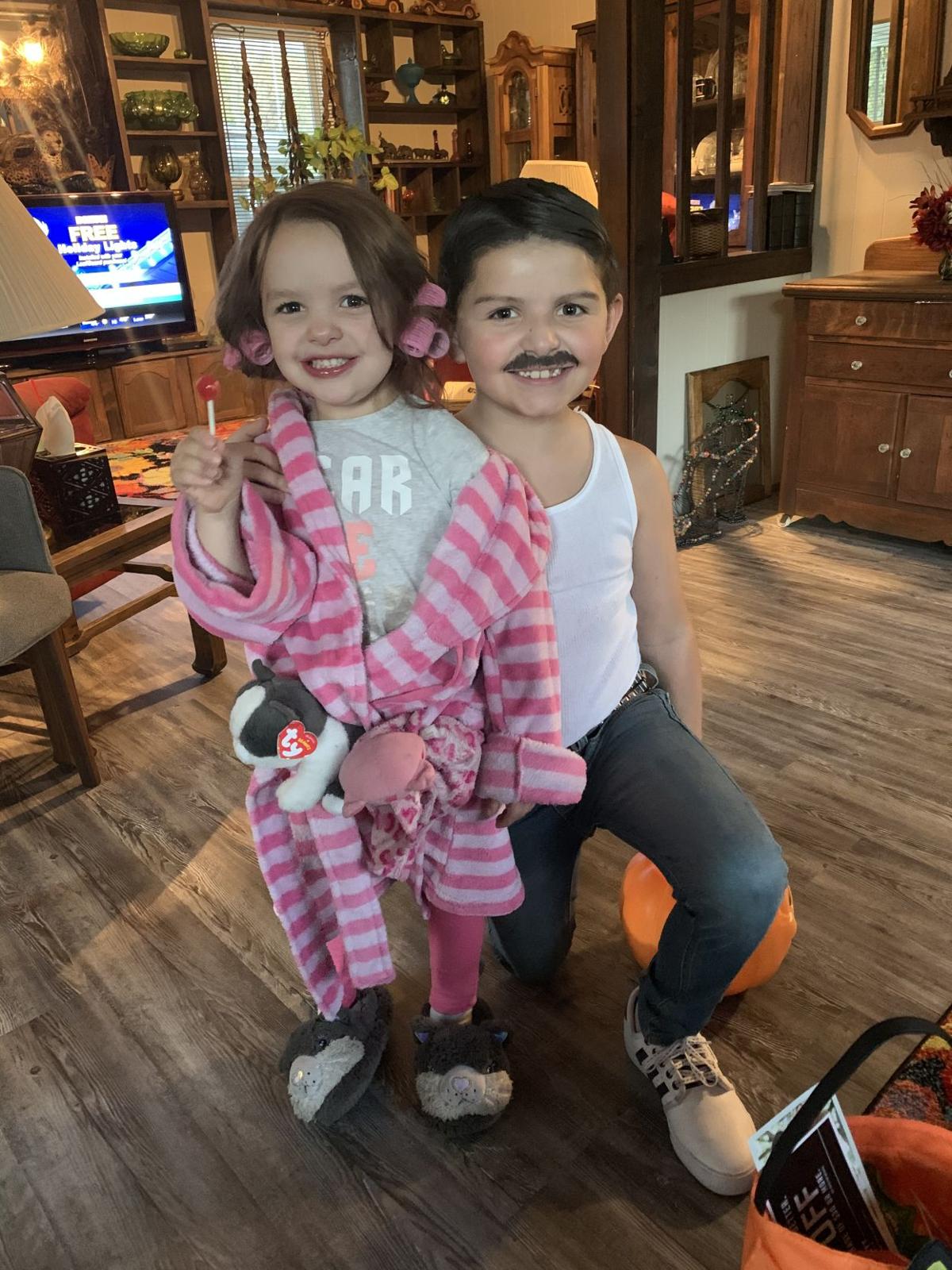 Adrian Cain, 8, and sister Soleil, 3, in their Halloween costumes. 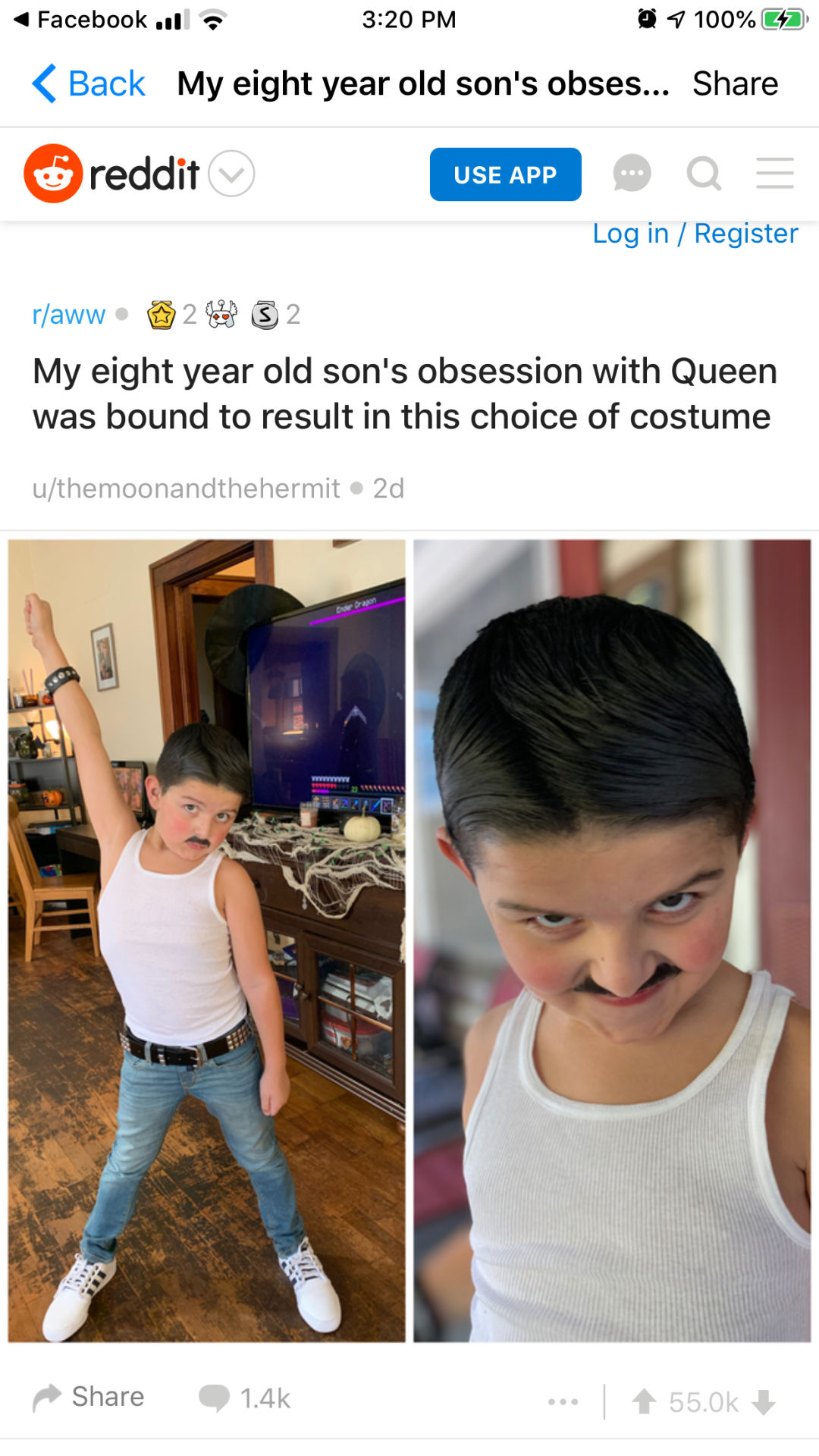 Adrian Cain, 8, is a mini-Freddie Mercury

Adrian Cain, 8, and sister Soleil, 3, in their Halloween costumes.

A local boy found himself in the limelight when a picture of his Halloween costume went viral over the weekend.

Eight-year-old Adrian Cain of Emporia went as legendary Queen frontman Freddie Mercury this year. With his hair greased back, a fake mustache and dressed in blue jeans, a white tank top, a pair of crisp, white Adidas and a special brand of swagger that only a true Queen fan could embrace, Adrian was the spitting image of Mercury during the 1985 Live Aid concert in London.

“He’s a major plan-aheader,” Sidney Cain, Adrian’s mom, said. “It was probably over the summer when he said he wanted to do it, even though he wanted the full-on like, yellow and black jacket ensemble. I knew it would be easier to put together the Live Aid look.”

Cain said it wasn’t hard to convince Adrian to go for the look.

“He watches the Live Aid show on YouTube all of the time,” she said. “I figured it would just be perfect to go as ‘Live Aid Freddie.’”

“I put it in the ‘aww’ sub-reddit for cute stuff and was expecting it to maybe get a few comments from Queen fans, but then my phone just would not stop going off,” she said. “I was shocked when it hit 1,000 and then I had to turn off notifications altogether because I couldn’t use my phone, they were coming in so rapidly.”

Cain said she’s had to shield her son from some of the viral-attention. Comments on Reddit were not all positive, she said, and she doesn’t want to show him anything that might upset him. In all, Cain’s post was “upvoted” — or liked — more than 50,000 times in less than 24 hours and was then featured on PopSugar.com on Friday night.

“I had thought she was just going to use the photo in a collection of other kids’ costumes,” Cain said. “I didn’t know there was going to be an entire article [about Adrian]. I was shocked by that. I had posted the Reddit thing in the morning while he was in school and I think it was up to about 34,000 by the time he was out of school. When I picked him up I said, ‘I got some news for you’ and I pulled up Reddit and I showed him the number of upvotes and the first thing he said was — and I wish I had this on video — was, ‘Is this real life or is this just fantasy?’ It was just so perfect. He’s proud of himself for that.”

Cain said she was surprised that Adrian got into Queen as much as he has.

“I never expected him to get a full-on obsession with Queen,” Cain said. “I made a playlist of classic songs I wanted my kids to know, and not just 70s and 80s stuff, but 90s and pop. Just everything that I feel like it’s weird if kids today have no idea about it. So, I made this playlist, and he just stuck to the Queen. Queen became his favorite of everything that was on there.”

Adrian said his mom introduced him to a lot of different music, but Queen stood out as his favorite because it was catchy and fun to sing along to. His favorite song is either “Bohemian Rhapsody” or “Somebody to Love,” but he listens to a lot of Queen. That’s why he thought it would be cool to dress up like the legendary rocker for Halloween.

It doesn’t hurt that the costume has made him a little famous, either.

“I’m just so happy that there’s a whole article about me and I have so many likes on there and a bunch of comments, too,” Adrian said.

“It’s just crazy that it blew up like this,” Cain added. “I didn’t expect this at all.”