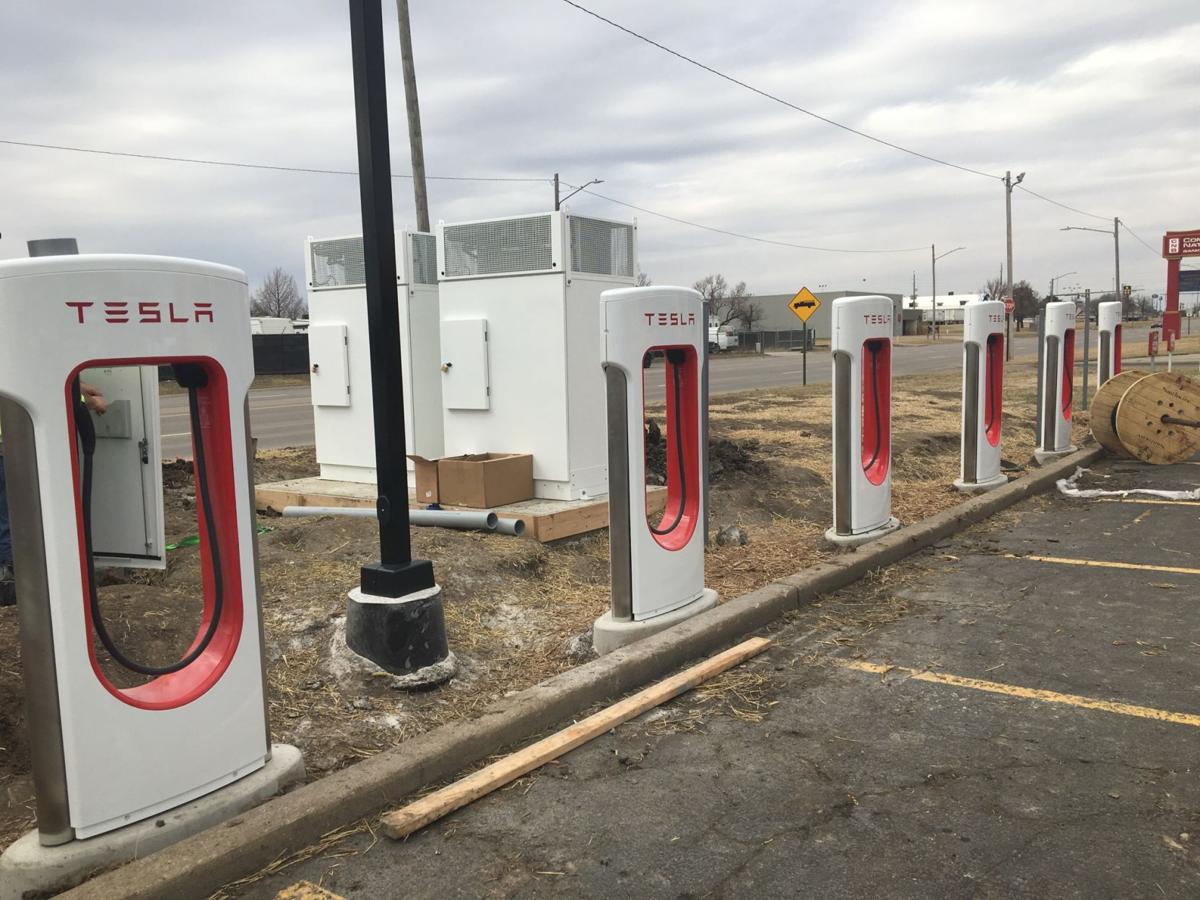 Eight Tesla electric vehicle charging ports were installed at Emporia West Plaza over the weekend. They are the first available in Emporia. 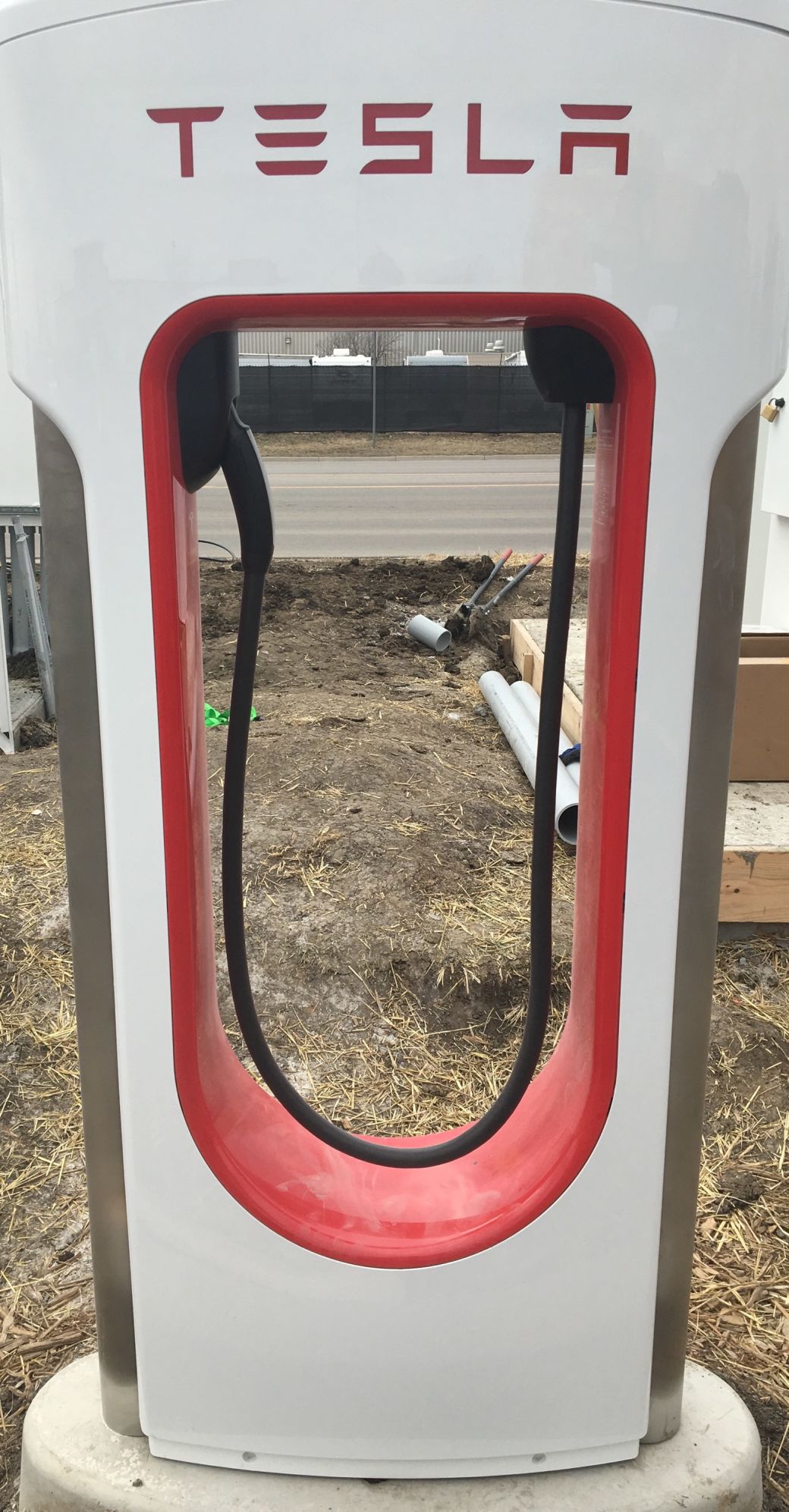 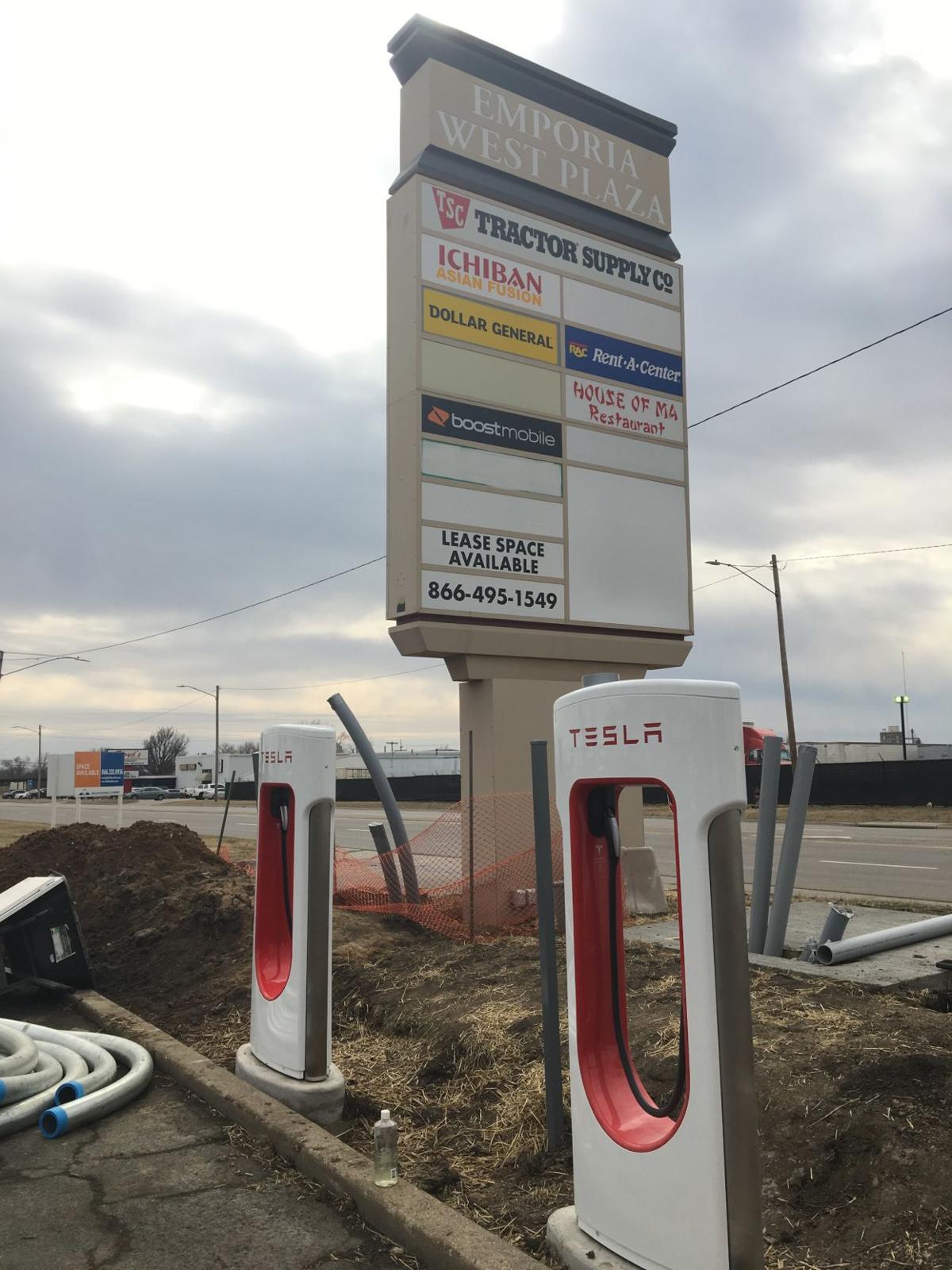 Eight Tesla electric vehicle charging ports were installed at Emporia West Plaza over the weekend. They are the first available in Emporia.

Emporia took a big step into the future over the weekend.

The stations can charge an electric vehicle in less than 30 minutes. They run with a 500 volt direct current.

Though no further charging stations have been announced, these may be the first of many in Emporia.

At an Oct. 9, 2019, Emporia City Commission meeting, Emporia Main Street Executive Director Casey Woods approached the commission about his desire to have charging ports installed downtown. At the time, Woods said Main Street was looking at five areas — the 400 through 700 blocks of Mechanic Street and the 700 block of Merchant Street — as potential locations. He told commissioners information collected by Main Street indicated Evergy would be responsible for installation and maintenance of the ports, with a small fee assessed to vehicle owners upon use.

Woods said painting stalls could be left up to Emporia Main Street or community volunteers.

“We’re excited about an infrastructure project that wouldn’t take public tax dollars, but we wanted to make sure the city was on board with this proposal, knowing there would be some negotiation,” Woods said at the October meeting.

At the time, the commission was uneasy about the idea of only having charging stations downtown. Woods said he would encourage property owners to contact him for more information.

At a legislative coffee event in Chase County on Feb. 15, Dist. 68 Representative Dave Baker of Council Grove said an increase in electric charging stations has also been a regular topic of conversation at the state level.

According to Baker, charging stations come with an average price tag of around $407,000 each. He said the state is working on ways to offer tax incentives for companies to install and operate electric charging stations, noting that “electric vehicles are coming, no matter how cheap oil gets.”

As electric vehicles become more popular and more widely used, he said rural communities are going to need to install charging stations as a way to remain economically competitive in terms of drawing in travelers.

“If we’re going to be viable going forward, if we want to stay in the game, we need to have places for people to charge their vehicles,” he said.

Dang, sure are a lot of doom an gloom posters out there. No forward thinkers, so far, cept me. It is coming folks, and in 20 years electric will be obsolete. Perpetual motion will take top billing, soon as someone figures it out.

Please tell me why I have to use my tax dollars for this and don't even use it. I am against tax dollars being used for any of this. And don't tell me the users will be when the state wants to give them money to put these in !

Also why do I have to pay for a fire department when my house isn't the one on fire? And why do I have to pay for roads I've never once driven on? And all these parks I don't visit? Only 54% of Americans use a public library at least once a year... schools are the worst... so expensive and all my kids are now adults. Please tell me why I have to use my tax dollars for this and don't even use it. I am against tax dollars being used for any of this.

Tesla builds these chargers in the US. They are paying for the charger. They have an agreement with the land owner for compensation. Tesla purchases Electricity from Evergy (Westar). Also all sale, franchise and other taxes are paid on the utilities. Originally charger was planned to be placed in Montana Mike's parking lot. Which fell through after Montana Mike's went out if business.

Booker5m, you’re not using you tax money. This is private business investment in its own infrastructure. Tesla owners have apps that help them find charging stations and pay for the power. It’s no more a public utility than the gas station down the road from you. SMH.

It will be our tax dollars if the tax incentives they want to give come through, that is what I am sure Booker5m is probably looking at. In a state that struggles to adequately fund education, giving tax incentives to for Tesla power stations, especially with Tesla not doing that well, and these only charging Teslas, it would not be the kind of investment most would see as benefiting the state.

Where does this power come from?

Currently Tesla buys power from the grid, but plans to disconnect most charging stations in favor of solar+battery.

I thought there was a charging station at the old Westar office building and one on campus?

Campus one was removed to build new dorms. The two at Evergy (Westar) are still there. They charge at a rate of 6 kilowatts an hour. This Tesla supercharger is 250kw Max an hour. Difference in charge time is 10 hours vs 15min Tesla pays taxes on all the electricity used. Which includes sales tax , city franchise fee, etc. Originally it was to be place at Montana Mike's. But they went out of business and Tesla to find a new location. Cost to charge a car is about $3-$5 for 250 miles range.

Wouldn’t it make sense to have these at places people go on a regular basis or places near where a lot of people work?

Correct me if I’m wrong, Tesla owners aren’t the type that frequent Tractor Supply or Rent a Center.

So we have 8 charging stations where Tesla owners will sit in their cars for 30 minutes and play on their cellphones? Is there even 8 Tesla owners in the Emporia area?

I sure hope the city or county didn’t waste any taxpayer dollars on incentives for this. It would of been better used for incentives to bring more businesses in town to fill vacant buildings like the old Aldis, Country Mart, and soon to be Detroit Diesel.

I was confused about why that location was chosen also. At a starting price of $40,000+, and not a family or long distance vehicle (like driving in from the farm in an outlying community), I don't see the typical customer of the mentioned businesses as probably driving Teslas needing a charge.

I don't know if there were any incentives, it is hard to keep up with what the county and city dish out, but it does mention that they want to get tax incentives (our tax dollars) for taking care of those that choose to drive an expensive car that want to require others to help or totally provide their power needs.

I agree, every single cent needs to go toward filling up those empty businesses, and not trying to draw a few people off the highway to eat in a local restaurant or fast food joint, buy a scented candle........... Is the motto "Stop, spend your money and get out of town?" We need to them to stay, not just charge their Tesla and drive away! These chargers are exclusively for Tesla, thus those with other electric cars will just keep buzzing down the highway.