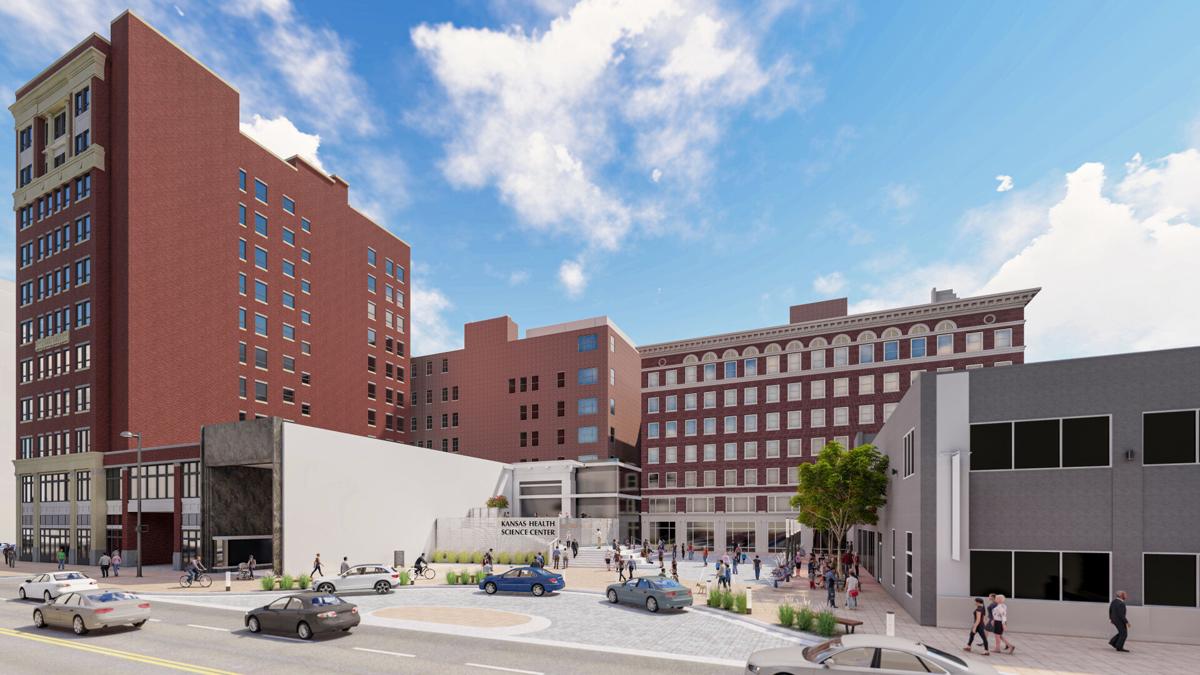 Currently under construction, the proposed KHSC-KansasCOM will sit at 230 E. William and 130 S. Market, in the historic 90-year-old building once home to Henry’s, Macy’s and Innes department stores. The campus will include an osteopathic skills training center, standardized patient teaching rooms, large lecture halls, small group study rooms, a virtual anatomy lab, and much more. 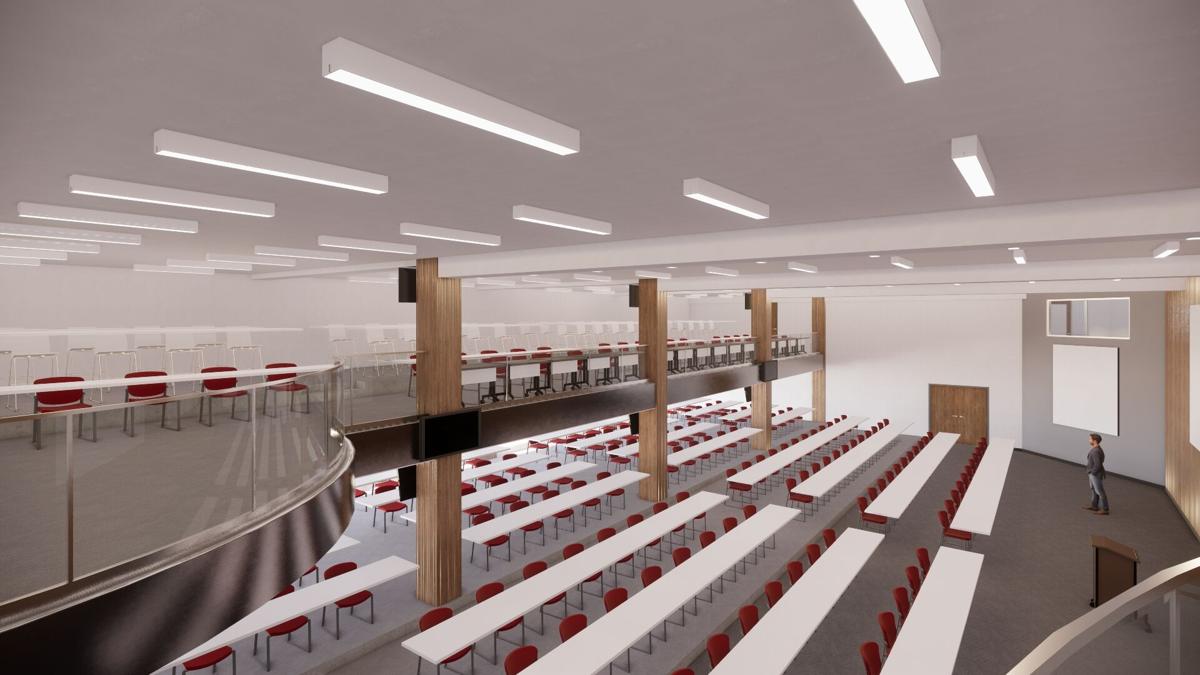 A large lecture hall would be a gathering place for learning at the proposed Kansas College of Osteopathic Medicine. 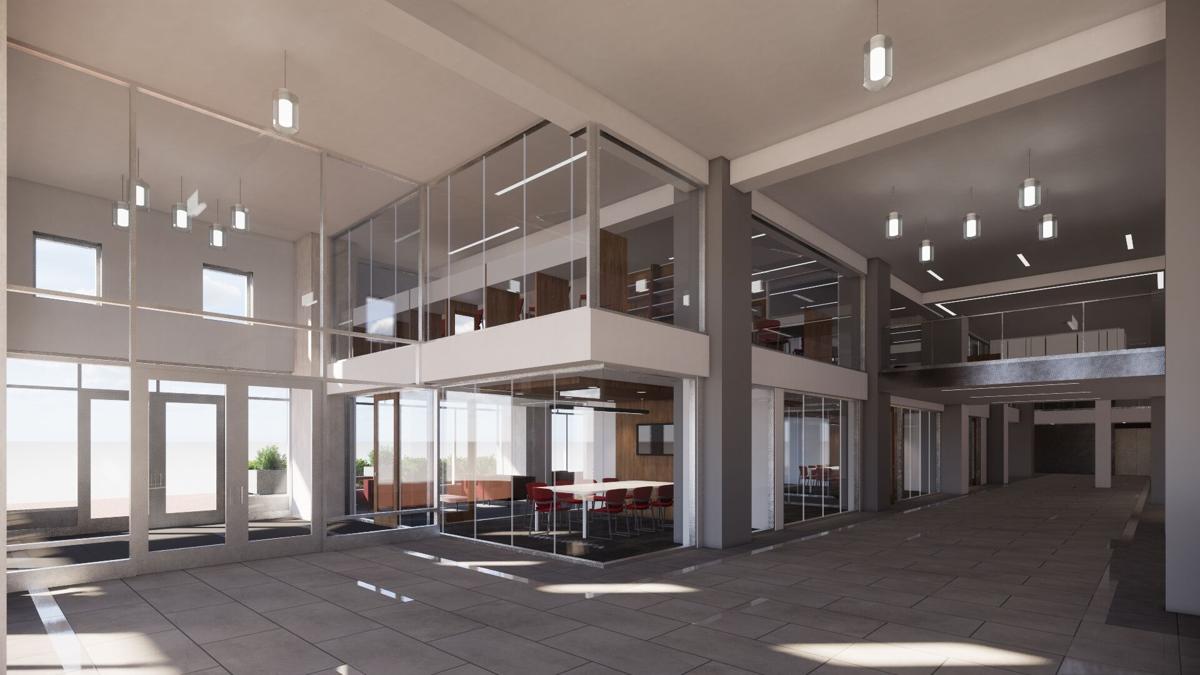 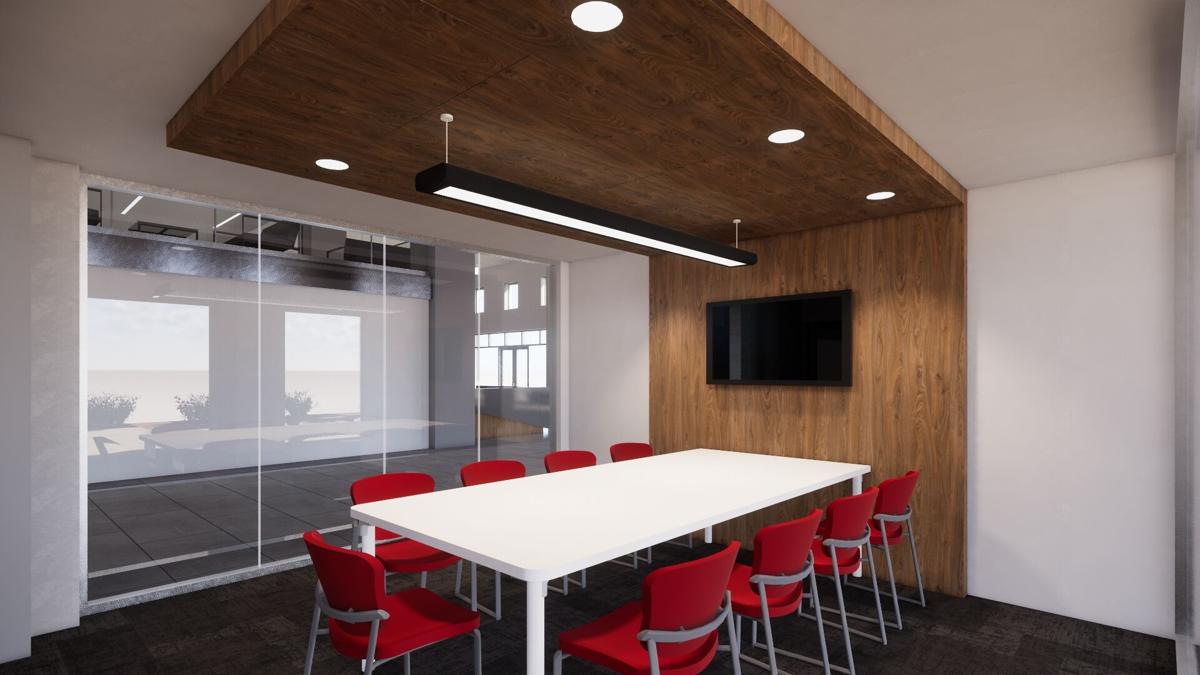 This rendering of a study space includes a television and lots of natural light.

Currently under construction, the proposed KHSC-KansasCOM will sit at 230 E. William and 130 S. Market, in the historic 90-year-old building once home to Henry’s, Macy’s and Innes department stores. The campus will include an osteopathic skills training center, standardized patient teaching rooms, large lecture halls, small group study rooms, a virtual anatomy lab, and much more.

A large lecture hall would be a gathering place for learning at the proposed Kansas College of Osteopathic Medicine.

This rendering of a study space includes a television and lots of natural light.

Rural Kansas communities have long struggled with health care shortages. Of the state’s 105 counties, 92 are considered partially or wholly underserved when it comes to healthcare — representing almost a third of the state’s total population.

The proposed Kansas Health Science Center — Kansas College of Osteopathic Medicine, which will be based out of Wichita and has been granted candidate status from the Commission on Osteopathic College Accreditation, has a goal of training 83 new primary care physicians each year.

Dr. Joel Dickerman, dean and chief academic officer of Kansas Health Science Center, said a 2005 study predicted significant shortages in physicians across the country by 2025 and 2030. While that led to the expansion and development of new medical schools across the United States, a shortage is still predicted — and even more challenging to rural communities.

For rural communities in Lyon County, where the closest hospitals are located in Emporia or Council Grove — or in some cases, people may choose to drive to metropolitan areas for care — Dickerman said that can present a challenge when faced with life-threatening emergencies or even receiving routine care.

“We need physicians in rural practices because some care is very, very timely,” he said. “Managing a stroke or a heart attack ... traveling an hour or two isn’t always optimal. Second of all, a lot of people, their family want to be available during a medical visit or hospitalization. If somebody has to leave their community, that makes it very challenging for that family. A lot of people would rather receive their care locally. They feel much more at home in that environment.”

Osteopathic physicians use a “whole-person approach to hands-on care,” focusing more on a holistic approach to the patient and healthy lifestyles rather than focusing on taking care of people when they are sick.

“The difference is between MDs and DOs is probably considerably less than it was 100 years ago,” Dickerman said. “Osteopathic physicians are fully licensed in all 50 states to practice the full scope of medicine, so that’s prescribed medications, provide medical care, do surgeries to the full scope. Osteopathic physicians are eligible to enter any type of specialty training available to both MDs and DOs. In fact, our residency system now in the United States is called a ‘single system,’ so MDs and DOs can enter any of these residency programs equally.”

Osteopathic medicine students go through four years of medical school training, during which they receive basic science training and clinical exposure in their last two years. Dickerman said KHSC-KansasCOM’s focus on rural health care means students will do clinical rotations in rural hospitals, practices and outpatient centers to get their training.

“Osteopathy students tend to get a lot of anatomy training, typically a little bit more, than our MD counterparts, and then we also provide training in osteopathic manipulation,” he said.

The focus on rural medicine makes sense, Dickerman said, because more than half of osteopathic students go into primary care.

“I think that reflects that holistic approach [to care],” he said. “There’s more of a tendency to want to go into primary type care and go to rural settings.”

Dickerman said while a goal of training 83 new doctors a year may sound out of reach, it’s actually doable. In 2019, there were about 21,000 students applying for 7,500 first year physician spot in medical schools — about a three-to-one application rate.

“Last year, that went up by about 5%, and this year what’s fascinating is applications to osteopathic schools have gone up 18%,” he said.

The renewed interest in medical careers is being attributed to the COVID-19 pandemic and the prominence of figures like Dr. Anthony Fauci on TV.

“They’re calling it the ‘Fauci effect,’” Dickerman said. “We’ve seen a tremendous increase in the number of applicants for medical schools and we don’t anticipate a shortage. Just for Kansas numbers, in 2019 there were 178 applicants from Kansas applying for osteopathic school, and that’s probably a low number because there isn’t a school here. It’s certainly more than enough to fill our class.”

And, these are “well-qualified candidates” who are likely to want to stay close to their communities.

“We know that the primary driver of people returning to a rural community is the fact that they have family there or live there, and so certainly our goal is to try to get people to want to return to a rural site,” Dickerman said. “If we can recruit people from those communities, there’s a much greater chance they’ll return there.”

The first cohort, targeted to start classes in Aug. 2022, would go out into communities by 2024. That gives Dickerman and his colleagues some time to reach out and build relationships in rural communities for clinical rotations.

“All of the students will begin their training in the Wichita campus for their first two years, and then begin their clinical training where they get out in the community, and year three and four, which would be beginning in 2024,” he said. “That’s where students will be in those rural communities. They also may go to an academic center or get experience in a specialty. So it’ll be a mixture. And again, the two years of in-the field training is designed to build the basic skills, get them familiar with these communities and then prepare them for residency — because after you graduate from medical school, then you enter a residency.

“Our hope is, by getting them connected with a community when they complete their residency, hopefully they can do a residency in the state of Kansas, and if not, they still would want to return to the community.”

KHSC is still awaiting accreditation from COCA, which is critical to the success of the college. Once the college receives accreditation, Dickerman said a solid timeline will be developed for the first cohort.

KHSC is currently seeking applications for faculty appointments. Dickerman said physicians who are interested in learning more about those opportunities can call him at KHSC at 316-866-3484 or on his cell phone at 719-499-0867. They can also email him at jdickerman@kansashsc.org.

The proposed KHSC-KansasCOM is an affiliate of TCS Education System, a nonprofit system of colleges advancing student success and community impact. Learn more at kansashsc.org.

"We know that the primary driver of people returning to a rural community is the fact that they have family there or live there, and so certainly our goal is to try to get people to want to return to a rural site."