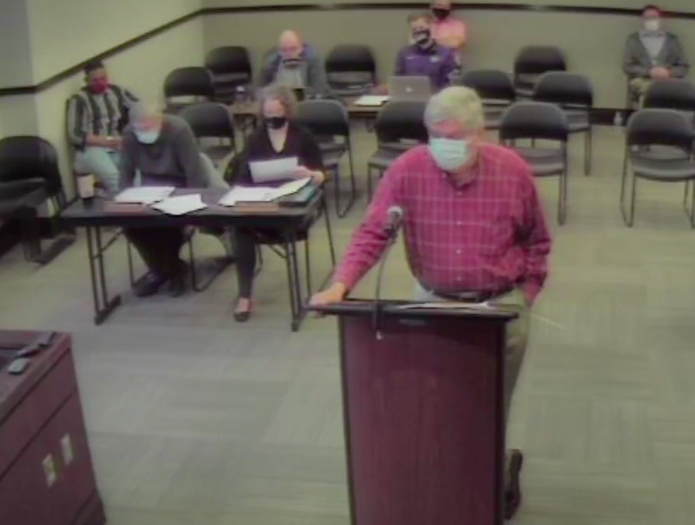 Special Projects Coordinator Jim Witt explained that about 53% of local households could afford houses priced at $150,000 and that this data point would help guide the commission in moving forward with making decisions in regard to housing. However, he also said that the variability of housing prices would be important to consider as well.

“That’s the second point, I think, to be made is that the rising costs of housing — affordable materials, etc. — is going to impact whatever we do,” Witt said.

Witt also pointed out that the cheapest house that has been developed in Emporia in recent years was $180,000.

“So one of the issues when we’re building new housing is, how much of our population can really afford that?” he said.

Witt detailed how Dodge City has successfully implemented the RHID program to build nearly 400 housing units in the past 12 years.

In the Dodge City model, Witt said, “the city becomes the developer. In this sense, the developer of the infrastructure pays themselves off, repays themselves through the RHID process. It’s a little different strategy. They’ve been successful at it. Will we be? I would think so, but you can’t make any promises.”

The commission seemed to be impressed by the Dodge City model and interested in investigating what it would look like to implement that in Emporia.

“[The Dodge City model] frees up capital for infrastructure costs at the front but creates a safety net so that we’re not just over-building a bunch of empty lots like some communities in Kansas have and they’ve sat on them for years,” he said. “We can create a strategy for growth that is right-sized to fit the community, but also doesn’t overwhelm us with unnecessary infrastructure cost.”

However, Gilligan also pointed out the importance of investing in housing to complement the investments the city has already made in economic growth, even with the potential for risk.

“I just feel like, for some reason, we’re overzealous here in [being] worried about a return, you know?” he said. “I’ll be honest, we made a decision as a commission just a [few] week[s] ago to invest $1 million dollars in property that we know we probably won’t see a return on in the next two decades. But we didn’t hesitate overall, a majority, to do that because you’ve got to invest in your community for growth.

“We have a broad audience of people telling us no growth can occur unless we invest in housing and, oddly enough, the investment we made [recently] has even less chance of being successful ever in the future without a housing investment in the current situation. So for me, I feel like we’re really getting in the weeds trying to find the perfect strategy to do it when really our goal should be, we want to build houses, start bringing us proposals inside the city limits and we’re going to start here. Then we’ll evaluate as we see out there.”

The city will continue to discuss this topic during its March 24 session.

Daphne Mertens of Healthier Lyon County also addressed the commission in regard to the Blue Cross Blue Shield Pathways to a Healthy Kansas Phase 2 grant the city received.

She explained that $50,000 had been allotted for creative place-making, which is the creative application of the arts, culture and social context to enhance economic development and community pride and to provide opportunities for people to be physically active.

One of the potential projects for this grant is the revitalization of Walnut Park. Martens said that a group of 60 or so local residents had formed a group called the Friends of Walnut Park with the goal of seeing improvements there.

Some of those proposed improvements include replacing the park sign, improving the swing set, fixing the kickball backstop and installing trash cans, dog waste receptacles and park benches. Those specific improvements have been priced at around $13,000.

Other potential projects the southwest Santa Fe Park skatepark, Quaker Park, downtown breezeways and the use of city-owned vacant lots.

"We have a broad audience of people telling us no growth can occur unless we invest in housing and, oddly enough, the investment we made [recently] has even less chance of being successful ever in the future without a housing investment in the current situation."

53% can afford $150, 000 with these wages in Emporia. $150,000 SMH, have to be able to save for big down payment before the can afford a home at this price. Rental raised to $750 a month by an company from Oklahoma and people can't afford it. A slumlord at that, painting over mold and pet hair.

Also think your going to get by cheaper renting? Not a chance 750 for a small house on 9th and Elm, 600 ish for a small house on Grove St, your average apartment will cost you right around 500 minimum. You may make ok money at dolly or tyson, perhaps even the pet food plant but i highly doubt it, even if you do your still just barely keeping your head above water. Rent/mortgage, food, energy, car loan, child care, insurance, taxes, inflation on and on, I'd say the commission has plenty on their plate to juggle.

Cut taxes! Cut them to the bone and all your problems will be solved! After all, it worked under Brownbutt.

Taken a stroll through your local hardware store lately, building supplies are going through the roof. Lumber up 180%, 1/2 cdx roughly $40 ish a sheet, 2x4's and 2x6's are the skeleton, cdx and osb are the skin. All of these material have increased by over 100% i can't imagine as it stands now that Emporia can build affordable housing none the less in mass to satisfy demand for the industries they hope to entice. While were on price inflation notice your food and energy bills going up? Get ready because we haven't even reached the second inning.

Witt can afford those high priced houses. He’s been milking the City for years. Thanks to his buddy the City Manager

And that City Manager is a great guy! Witt won the World Championship in Wisconsin in 2010 and is resting upon his laurels.

I don't know where Witt is coming up with his info, but I just can't believe that the cheapest house built in Euphoria recently was 180,000.

Well do some research.. being a sniper is easy.